Layer shift around holes only?

i have been fine-tuning my print quality on my MPCNC (All parts bought from here), and one issue that I have not been able to find a whole lot of information about, is the layer shift I’m experiencing, that occurs on the outsides of holes.
I’m not sure what setting would be relevant to this(still learning), so if more info is needed, let me know and I’ll get it for you.

Any information on how to correct this would be greatly appreciated

Looks like your heat is a bit off and your retract is off as well. Try a 1mm retract, and make sure to start with print speeds of 30mm/s or lower until you learn the machine a bit.

As for the layer shift make sure your spool is not pulling on your extruder.

Thanks, I’ll take a look at those settings right now.
I keep 3 loops of filament rolled out at any given time, however this layer shift is only occurring around holes. This part has 5 holes, and the layers shift out around them every time like clockwork. It looks as though the layers are pushed out on both sides, like they are wider than the others.

It is an odd thing and I do get it myself sometimes worse than others. I have been printing out the xyz part only on the newest mpcnc I built trying to solve just this issue. I have gotten my prints to look pretty good and all the holes are fine except one and it get the sift in one direction. it is kinda frustrating but it can get better than what you are seeing.

I pulled this off the mpcnc this morning. Maybe too hot and a bit of over extrusion. But still fine tuning. 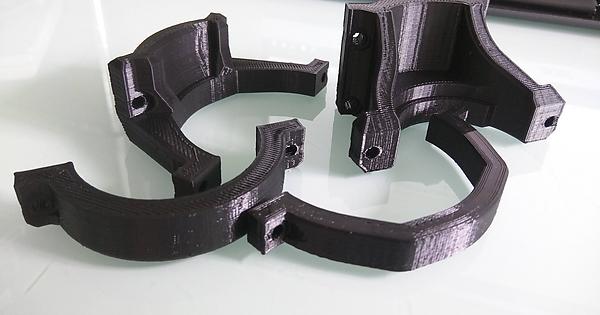 So I checked, and the retraction is set to 1mm already. This part is being printed at 205 celcius, so I’m not sure what temp it should be at.

Here is a picture of the part a little further along. You can see that every time it gets to a layer with a hole in it, it shifts across the whole piece. I have a feeling it will be a setting or something, but I’m just not knowledgeable enough yet to know where to start. 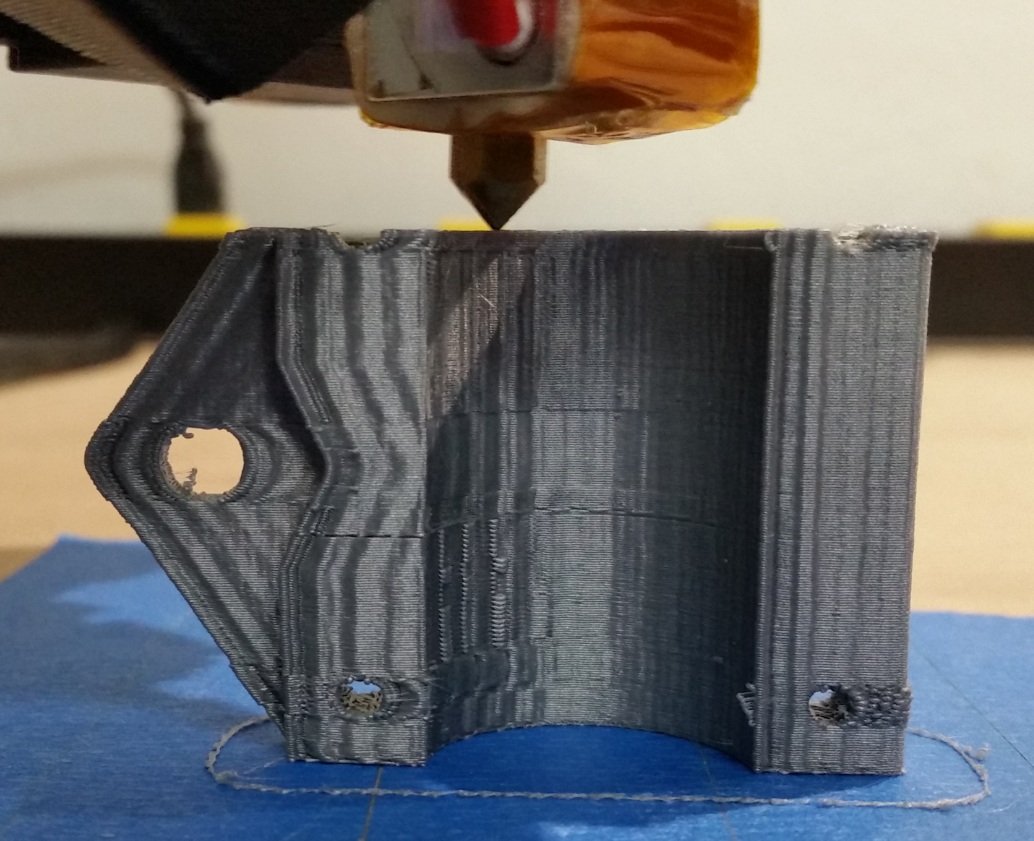 Yes, I believe it is currently at 24mm/s
There are so many different print speed options, are there any that need to be significantly lower or higher than others?

I’m using Silver HB PLA as well
I will try lower temperatures on the next print.

Your prints look fantastic. I hope to have prints coming out half as good as that some day

All the settings are here.

Just to be clear is does not look as good as a dedicated 3D printer for a lot of reasons but I have never spent much time trying to get it better, but now I am slowly tweaking settings and watching how the parts come out.

It is getting much better.

A big jump in quality came from turning my print fan speed up to 85% from the second layer and up. I tried a few speed tweaks, and even a filament tube to offload all the spool force from the extruder. When I think it is as good as it gets I will update all the settings I am using.

I think it much better than the og slic3r. Check it out. Their stock settings seem soot on except retraction. Which was probably set for an e3d hot end.

No not yet, I have been using mostly simplify3D. I bet the prusa edition is better. I’ll give it a shot, thanks.

In my opinion, this is ultimately a slicer issue. Whenever there are holes, the paths and directions are different, so the nozzle runs and pushes the plastic in a different way, which generates different forces on the gantry, creating these small shifts. These are not real shifts as we would talk about for step losses, my guess being that they are due to some little backlashes in the X and Y axis, which are difficult to avoid.

I made some tests a few month ago on my delta printer to try to solve this issue. On a delta printer (or at least on mine), most of the backlash is due to the ball joints, which have a bit of play. I tried to put some thick molybdenum grease on them to try filling the gaps, which actually reduced backlash quite a lot. It really helped smooth things up, but it was still possible to see some very tiny differences in layer superposition around holes. I think they are unavoidable unless someone comes up with a slicer solution that can take this backlash into account while doing the calculations or unless someone comes up with a mechanical zero backlash solution.

In your case, I think most of the problem is due to play somewhere, so try to find the source.
Also, your first layer seems to be a bit too high according to the picture you posted. You may want to come a little closer for better adhesion.

For slicers, I recommend you the good old Kissslicer. Pretty easy to use, no need to adjust a billion things, super fast for slicing and it gives pretty good results.

Thank you for your reply! I’m still fine-tuning the printer, so I definitely think there is more slack to take up somewhere.

These pieces are actually part of a brace I’m making to hold the frame sturdier.
It’s a fairly new build, so I am also still adjusting the belts as the zip ties rest into place.

All in all, this isn’t terrible for how recently we assembled the printer, and it’s only going to get better from here.