Fine-tuning phase here in Rome. I have built my LowRider2 from scratch mostly to avoid import taxes from the US that have become unaffordable lately.

Few changes made to satisfy my perplexities. Not indispensable though.

All in all, I am super satisfied with this project. Awesome job done, Ryan! Looking forward to starting the real stuff manufacturing. 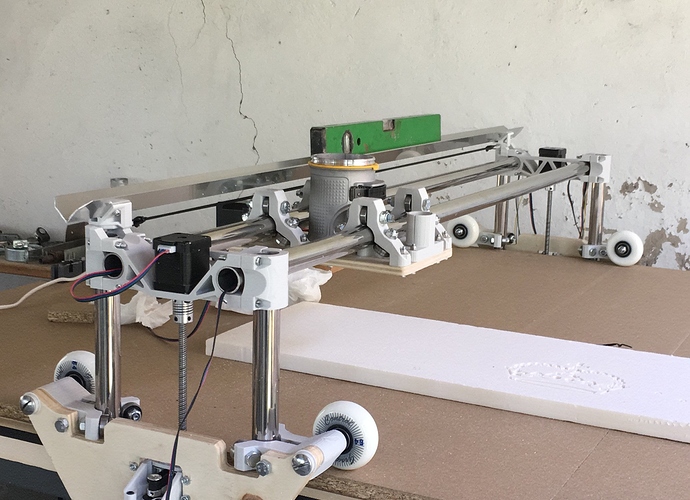 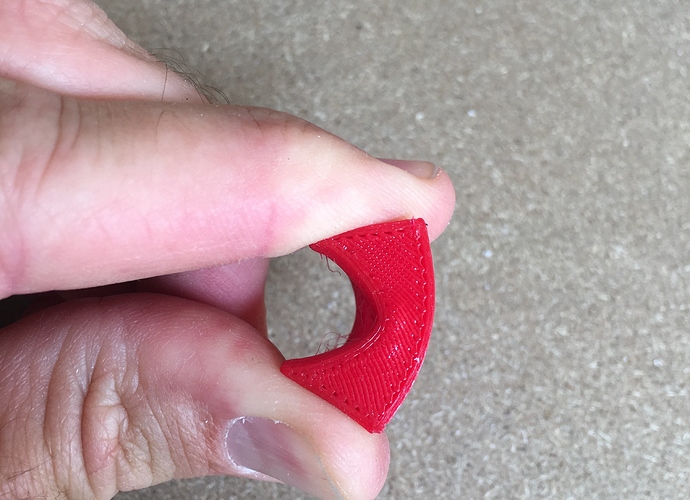 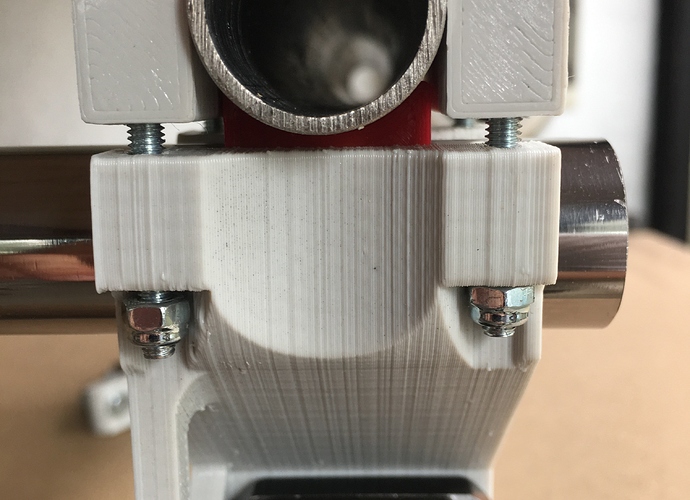 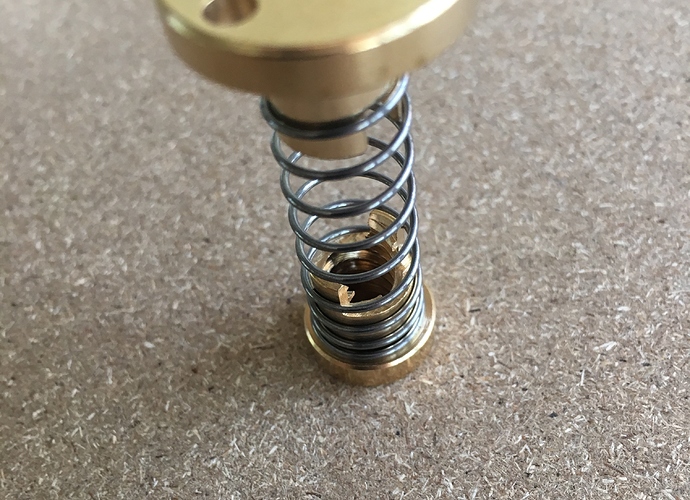 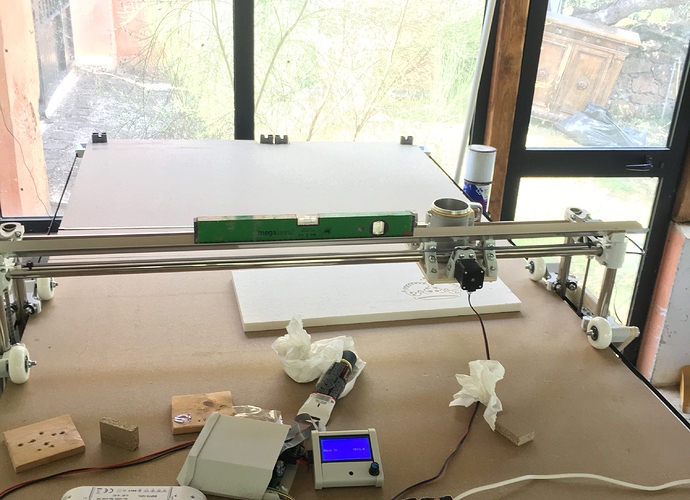 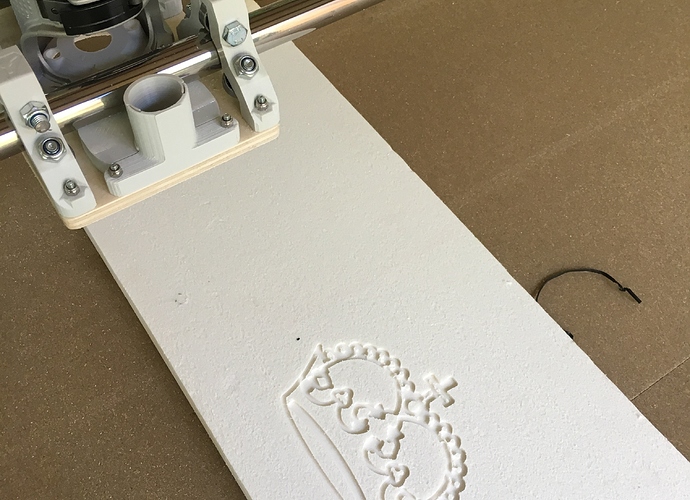 Awesome, now get it dirty!

Interesting, can you send more information or point to a link about the anti backlash nut? I love the idea of that and may try it myself.

Were you consistently getting the drop and now you’re not?

The weight of the machine keeps the backlash under control.

This is my first time with leadscrews. I am used to a delta 3D printer (Rostock Max V2) which I now know well but is not equipped with leadscrews. So I was surprised and confused with the dropping behavior.

It happened consistently every time the 611 plate (without the milling machine installed, so pretty light) was on one specific side and I was switching off the system. In a few occasion, I noticed also it dropped the Z-axis while still powered on, after a few minutes on hold. But I was only testing for the wiring setup so I didn’t bother too much for that. At the opposite far end of the X-axis, it seemed to keep the weight flawlessly. In the beginning, I thought it was a problem with the stepper motor (since I had some troubles with the shipment packaging quality from China …), but then I found out that not energized the steppers don’t keep the torque anymore and that this dropping is sort of “normal” behavior.

I didn’t know anything about anti-backlash leadscrew nuts, but it made sense to reduce the backlash anyway as the original assembly leadscrew + nut was sort of loose and floppy. I think I stumbled by coincidence in one of these products as I was looking for longer leadscrews. As soon as I discovered it I went looking for some video and posts explaining the functioning (I just googled anti-backlash screws and watched the first three videos). There are different types and the one I picked from Amazon for 10$ is ok (set of two). I am still not 100% sure this is the definitive fix but so far it seems to work well. No drop at all since the installation, with full load and power off.

In my case, the dropping was occurring every time I was powering off the system. I didn’t like to see that drop, left aside from the fact that I had to level everything back again every time.

I tend to think that it was mainly due to the assembly leadscrew + nut, pretty floppy, as I said in my answer to TJ. Possibly a higher quality assembly, and the weight itself, as you highlight, may result in a system less prone to this. Anyway, installing these anti-backlash nuts solved my problem as far as I can see.

They are supposed to drop. It’s fine if you like this workaround, but there’s nothing wrong with your machine if they drop. Ryan has the firmware set to drop after five minutes of inactivity or something, but you can disable that completely in the firmware. Both sides should actually be dropping though. So your machine might have a little too much friction. Did you lubricate your leadscrews?

The backlash is definitely not a problem and these nuts are just adding friction in the leadscrews. Enough friction the very heavy gantry can’t push them down. So when your motors are trying to lift, they are now lifting the heavy gantry and fighting the resistamce from these nuts (which is at least as much as the weight of the gantry). If it works for you, cool. But others need to be aware of this potential drawback. You may lose steps lifting the Z more than people without those nuts.

Thanks for your insight. I am a complete newbie with this machine so I am listening very carefully to your remarks. By next week I will carry on the steps/mm calibration. I will monitor the behavior and report on performances and anomalies.

I did carefully lubricate both leadscrews. The dropping consistently occurred only on one side.

I had read about the firmware settings concerning the dropping, for that reason I didn’t pay too much attention to that happening while powered-on. If the dropping would occur on both sides, with the same extent, I probably wouldn’t be concerned too much. But the asymmetry this behavior generates seems a burden to me. It might very well be also my lack of experience though.

It’s relatively harmless. So if it’s working for you, then go for it.

You shouldn’t need to calibrate the steps/mm. There are exactly 200 full steps/rotation on these motors, exactly 1/16th microstepping, and exactly 16 teeth per pulley, so there’s any error you’re getting isn’t in steps/mm. It will be in flex, or feed/speed settings. So don’t adjust them. The Leadscrews are also made with accurate pitch. If you tell it to move 100mm and it moves 100.5mm, it’s not the steps/mm that’s wrong, it’s something else that’s adding in 0.5mm. If you change it so it goes exactly 100mm, then when you move 10mm or 200mm, it will be even more wrong.

If you’re lifting the Z and the resistance from these nuts, plus the weight of the gantry is too much for the steppers or stepper current, it will tell you by skipping steps which looks like making a sort of grinding noise, and not move up at all, or move like half as far. This will be obvious in a job because as your machine lifts up to the clearance plane, it won’t make it, it will then travel through your work, and dive even deeper in at the start of the next cut. If you’re standing there (which you always should be) it will be painfully obvious. It’s really not fun, which is why Ryan has tried hard to make sure all the motor torque is going into lifting the gantry instead of spending it on overcoming friction.

I think the best practice is to drive it to a parking spot under power, before disabling the motors. Before starting each job, I make sure each side has dropped all the way down, and there’s no tension in the coupler. This acts like a hard stop on each side, so the gantry Z will remain square through the job.

FWIW, one of the reasons he originally called it a “low rider” is because of the way low rider cars sometimes have hydraulics to drop the car down to zero clearance, and the gantry dropping kind of reminded him of that.

The reason it drops on one side is because that’s usually where all the weight is at. If you end with the router on the other side, that side will drop.

I got it. Now everything becomes clear. At first, I was really scared it was a technical issue with my machine. What I’ll do then is to relax on this dropping behavior and while keeping these anti-backlash nuts and monitor them for the moment, I will think and setup this parking routine at the end of work. Also ok of the calibration, I will refrain from touching that, still I will need to ensure the machine is squared as it should be.

Thank you both for the advice and the good practices to follow. I am eager to start and get it dirty as Rayan said :))

I used t4 lead screws and my gantry will not drop, even if I try to force it

Thanks for your insight. For my configuration and for procurement reasons I installed T8 LeadScrew 1 start 2mm pitch, 2mm/Rev (see the picture). This has forced me to amend the firmware. Not a big issue. Anyway, this configuration does not offer any advantage as far as I can see. Also, I removed the anti-backlash nuts, indeed Jeff was totally right here, they are not the solution either.

What puzzles me is that the z-drop during cuts still pops-up now and then and I cannot relate it to any mechanical misconfiguration. The lead-screws are well lubricated, I un-tightened the screws holding the nut, I even replaced the two Z axis’ motors for the sake of completeness.

I will try to set-up a new harness for the z axis. Even though I verified it several times I am not 100% sure of the serial connection I did. In addition to this I inserted “too many” connectors along the way. I am scared that this can be the origin of some poor wire continuity.

I will consider your option if I am still stuck with the z-drop. 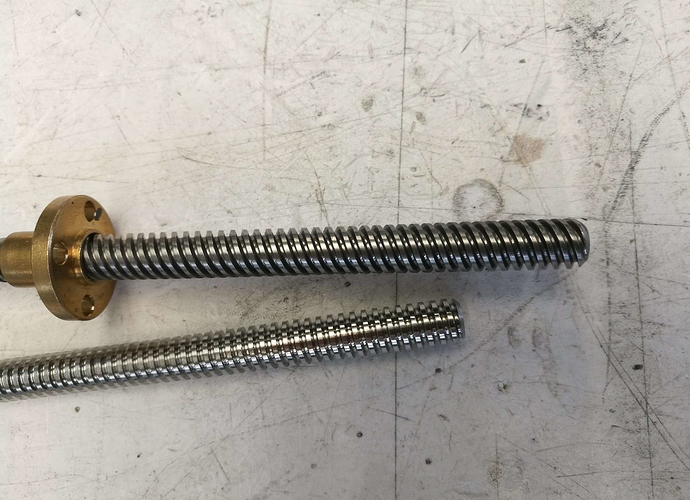 On my machine, the nuts tended to not be perfectly perpendicular to the screws and that caused some resistance. I ended up shimming them a little to get them square.

hello Francesco, I would like to ask you some information or advice about the lowrider 2 in private. Obviously if you like it. thanks