The table is finally starting to look like something. I think it needs racing stripes. 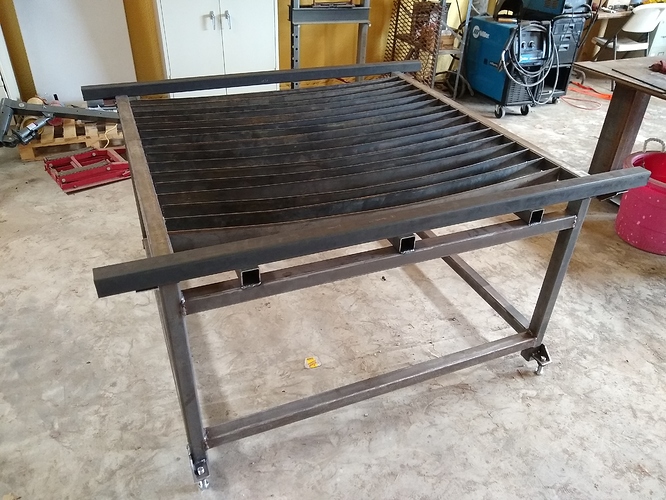 4’x4’+ cutting area. I’ll be running linuxcnc with the plasmac configuration, a mesa 7i96 ethernet breakout board and a mesa thcad-10 for torch height control.

That’s a good looking table! I definitely want a CNC plasma cutter in the future.

It’s starting to resemble a lowrider. 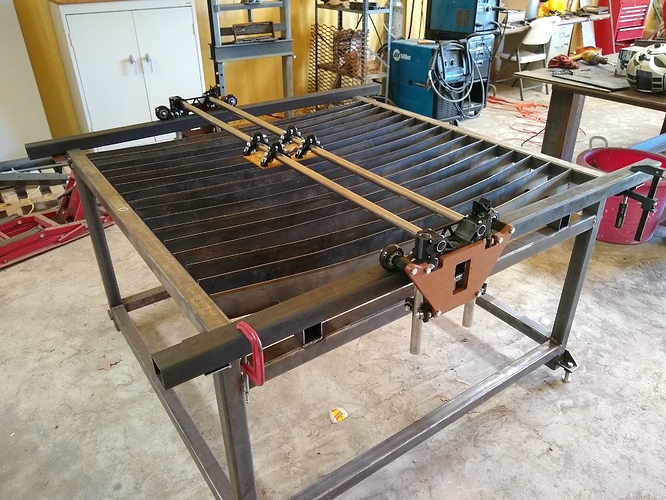 Still debating on how I want to design the home switches. I’m thinking I’ll make a 3d printed part that screws into the side of the z rail that’ll accept a nut and screw for adjustability and mount the z homing switch on the y plate. Also thinking about modifying the y-endstops to accept a screw for the same reason.

Since I’m not building a typical Marlin/GRBL contolled lowrider I’ve been having to do a lot of research on my own and asking questions in other forums to figure out how to do this. Most of the hardware selection was inspired by @uthayne’s build because he has proven it to work well for his lowrider plasma in his build thread. I’m going to do a series of write ups in this thread to document everything I’m doing for my own future reference. Maybe it’ll help someone else in the future as well.

For my build I’ll be using the following electronics:

Here is the plan as far as wiring goes. Any input is welcome.

LinuxCNC at this time is at version 2.7. Version 2.8 is better at running dual motor setups like ours. Version 2.8 also includes the new PlasmaC component for running plasma machines. Development version 2.9 includes paused motion and reverse run, I'm going to use this one. But at I minimum I'd upgrade from 2.7 to 2.8.

The mesa cards require linux to run with a realtime kernel. The easiest way to get that is to just install linux with the ISO from LinuxCNC’s website. Specifically the ISO with rtpreempt kernel and Debian 9 Stretch here http://www.linuxcnc.org/testing-stretch-rtpreempt/

But the ISO will install LinuxCNC 2.7. The easiest way to upgrade is to use the “buildbot installation”. These are precompiled binaries.
http://linuxcnc.org/docs/devel/html/plasma/plasmac-user-guide.html#buildbot-install

… I’ve chosen to set this all up the hardest way possible by compiling a realtime kernel from source on Linux Mint 19 and then compiling the LinuxCNC development version from source. YMMV. Maybe more on that later. (edit) A linuxcnc guru posted a quick rundown on how to get Mint 19 up and running with a realtime kernel here: https://forum.linuxcnc.org/9-installing-linuxcnc/36822-linuxcnc-on-linux-mint-19-1-quick-and-easy-installation?start=0

LinuxCNC is a very powerful and crazy customizable cnc controller. It can be used to run mills, plasmas, lasers, lathes, 4th axis, 5th axis, robot arms, skynet, etc. As a consequence of this customize-ability at first glance LinuxCNC can seem overwhelming. But for a simple 3 axis milling machine like the MPCNC it’s really easy. After LinuxCNC is installed on the computer you can a MPCNC configured in about 5 minutes, tops!

Here’s a quick tutorial on how to get a base MPCNC or Lowrider’s motors turning with LinuxCNC, specifically with a Mesa 7i96. Other Mesa cards will be very similar. I’ve made screen shots of all the settings I needed to get a base machine up and running. I’ve highlighted some things to call attention to but go ahead and look over each option to make sure they match up.

LinuxCNC comes with 2 different wizards to setup a machine, one for machines wired up through parallel ports called Stepconf, the other for Mesa cards called PNCconf.

Fire up the terminal to get started.

That’s it. That’s all it takes to get a base mpcnc or lowrider running with linuxcnc.

I have added a tag to this. Thank you so much for the thorough setup. A lot of options but…seems manageable now.

A lot of options

Yes! There’s an endless amount of configuration and hardware options. Variety is great and all but its overwhelming for the uninitiated and puts people off. Part of the problem in trying to find examples/tutorials in linuxcnc is that everything out there is just so different that newbies like me just don’t know what applies and doesn’t apply to them. I think something like the mpcnc/lowrider could be a good introduction to linuxcnc because we’re all using relatively similar machine designs and the same motors, it’s something of a standard.

The learning curve can be really steep depending on what you’re trying to do. But I don’t think it has to be bad at all for setups like ours. I thought if I layed out exactly one way to do it, and how simple it was, that it might make it easier for someone else down the road to start down this rabbit hole.

What’s kind of crazy is realizing how powerful it is coming from a marlin setup. The above setup gets you a base machine like our standard mpcnc/marlin setup. Want to add dual endstops? Just a couple config changes. Want to add a relay for your router? Gimme just a moment to make a config change. Want to add a relay for your vac, cabinet light, and george foreman grill? No problem, just a few config changes. No fussing around with programming and flashing firmware. You can also have as many different configs on one computer as you need, eg I’ll have this base config for running a router, I’ll have another for running a torch. It’s just a matter of starting up linuxcnc with a different config file.

… but maybe it’s just well suited to me. I’ll have as much fun poking around config and code as I will actually using the machine. (EDIT: not that I need to! … I don’t want to scare anyone)

I managed to run the z down too far and permanently stretched out one of the z couplers. Ill reseat the lead screw to contact the motor shaft but how stretched is too stretched?

@vicious1 et al., what do you think? Do I need to go ahead and replace this stretched out coupler?

Nope, I have a few that are worse than that. Over the years I have really tortured a few, on on the lowrider and one a few on the printers. I just re-seat the screw and keep going.

Finally got it temporarily wired it up for some testing. It’s a start! 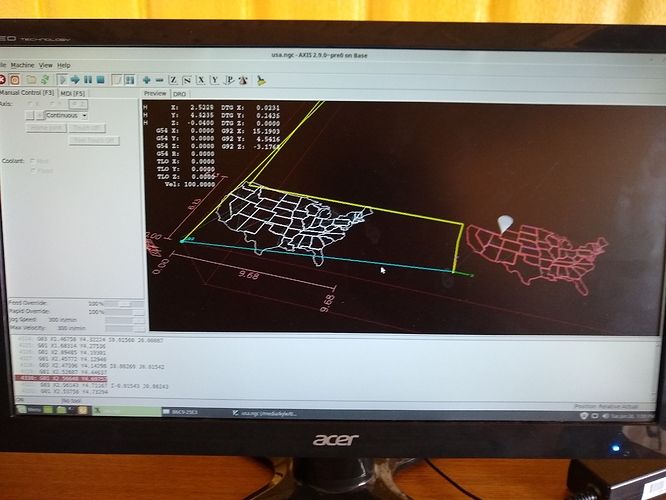 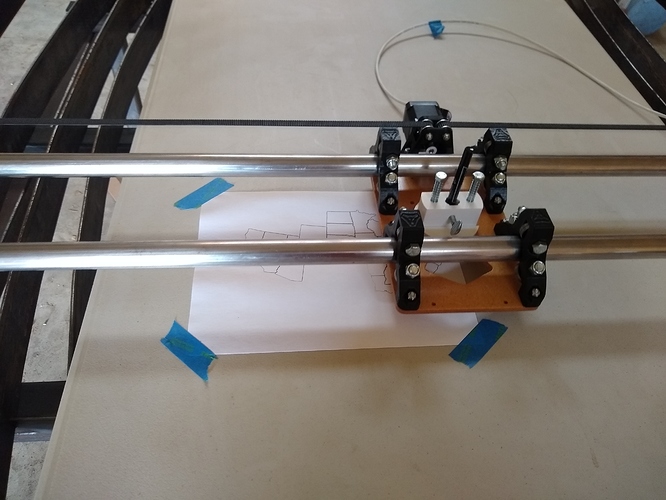 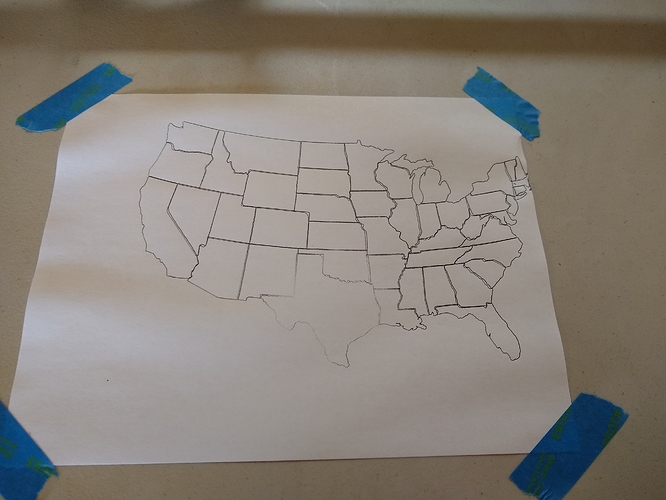 This pen mount from thingiverse is pretty slick but there’s some room for improvement.

[edit]
For anyone following along re linuxcnc, you’ll notice in the pics that the pen cut some corners and rounded them over instead of being sharp. This is partly because the pen was wobbling in the pen mount but mostly because the linuxcnc trajectory planner, a “feature” called path blending. To fix the issue I’ll need to put the G64 gcode at the top of my gcode files.
http://linuxcnc.org/docs/2.6/html/gcode/gcode.html#sec:G64

I stretched my first set of couplers out WAY more than that. I did replace them. Thankfully Ryan sells them cheap. Discovered it’s important to note whether you’re in G20 (inches) for G21 (mm) mode. Bad things happen when you try to jog the Z down 25mm, only to realize - Too Late - that you’ve instructed it to jog down 25 inches.

Thanks for documenting this so thoroughly. This approach is more affordable than I had realized. I’ve noticed that open source CAD/CAM options seem to support LinuxCNC better than other control mechanisms. While I won’t do so soon, I may follow your example at some point in the future.

This approach is more affordable than I had realized.

That said I like the mesa card enough that I’ll probably be buying them again for future projects.

Hello. I’ve been reading your post for a while referencing this thread for my project. It’s been a lot of help and I thank you for that. I was wondering how things are holding up, and if you have a complete wiring diagram with all your components included?

Sorry for the late response. My project had been put on hold for a while now. But we just moved into a new shop and I’m getting back into it. Right now I’m trying to figure out how I’m going to implement a down draft system.

I’ve also picked up a new NEMA steel enclosure I’ll be moving the electronics to. My wiring plan won’t change much from what I’ve shown above. I will be adding 12 vdc for a computer fan and I may use a relay instead of the fuse when wiring up the plasma cutter… We’ll see.

I assume there had been a lot of updates to linuxcnc plasmac so I’ll need to play catch up there too.

New hypertherm should arrive this week!

Time to get back to work 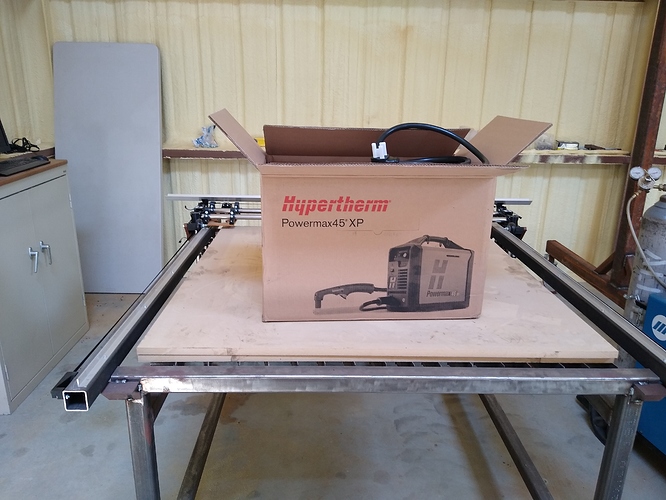 I am very very interested in how this plays out. Did you buy the straight torch as well?

That is going to be hard on the wood spoil board but o so kool. I have wanted to do this for a long time just @forcerouge had so much trouble but maybe it’s time for round ? And to get my garage cleaned and ready 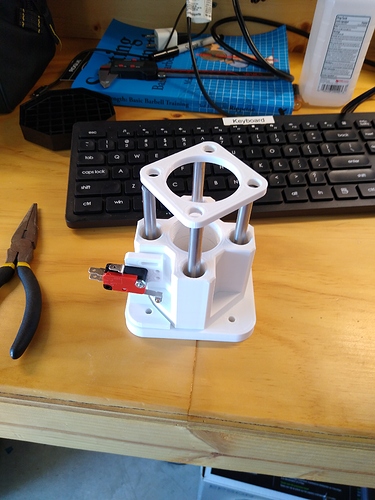