Much mess right now, so ignore and enjoy the pics. cheers! 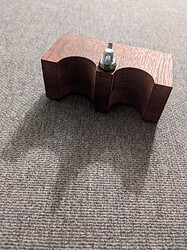 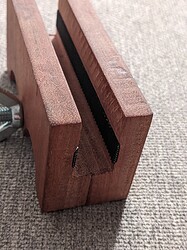 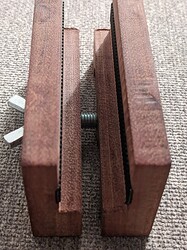 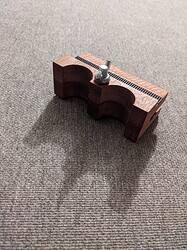 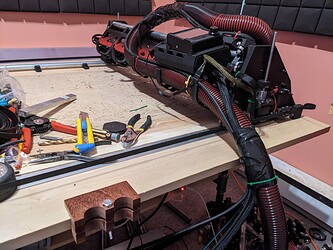 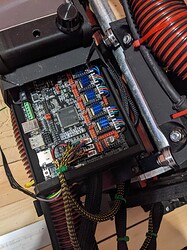 I found the belt holder slots very snug, sandpaper strips sawing snug. Tip: strip the ribs off one end of a piece of belt, feed that through and pull it all the way through a few times. There were a few times like that throughout the build, sanding this or that for clearance, Z holes were narrow for the printed mount, required Dremel work to widen. Bottom of the router carriage where it crosses each bit of plastic supporting the wood, sanding cleared that up.

Appreciate the quick release, think it could use a tad more plastic near the screw for more piece of mind that it wont wear down and slip off.

Of two minds about the placement of the x end stop switch, if it were mounted on the side instead of moving along with the router it would be nicer for access and wiring, but so long as it keeps working, don’t care too much. Destroyed a few end stop levers already, (2xX, 2xY, no Z) so using the spade plugs is a very good idea.

I like the JST-XH connectors more than DuPont, easier to assemble, and they lock in. The skr pro doesn’t need any changes by doing it that way.

I use a power supply with 5/12/24 V outputs, that is the thick cord coming out of the box, using 24V for the motors and 5V is wired to a usb port, currently powering the led strip underneath. I am using one of those phone app controlled ones from AliExpress, currently set to pulsating red. Rather not have 120V anywhere near me, using fairly thick gauge wire, no voltage drops.

I cut a hole in the LCD case to allow the esp wifi module to fit, works well, not sure if the right side of the display should be more snug. I made 5 holes in the bottom of the skr case for aviation plugs for the stepper wires, didn’t anticipate the hose interference, would have put them closer to the wood.

If you were wondering about the duct tape, it is for the noise of the hose ribs slipping against wood. I use stealth chop, so I hear it, also the jerks of motion grab my attention too much. I think Ryan removed a bit of his Makita cord, the stuff rubber bit near the router, instead I used the holes for the zip tie to keep it out of the way.

I moded my LR2 table by adding 8’ long L’s to each side and screwed them on, I routed a slot for the aluminum strip, not fun by hand. They are there for the belt mounts and to keep the hose out of the way, they are not supporting weight. They could support some I suppose, but they are a natural pry bar.

Very well engineered, lots of nice touches all around, a lot easier to move around and assemble than the LR2, but I kill end stop levers apparently, never knew.

I like it, and thank you for the findings. I use mine everyday now and I have a few tiny ideas for changes but nothing major enough to actually change anything yet.

I am going to keep working the electronics and firmware side for a bit and keep tabs on how all the new builds are going and looking.

I remixed the right side panel for that. Link included for other people reading this. It’s probably fine with a hole cut, really, but I did like having it printed that way. 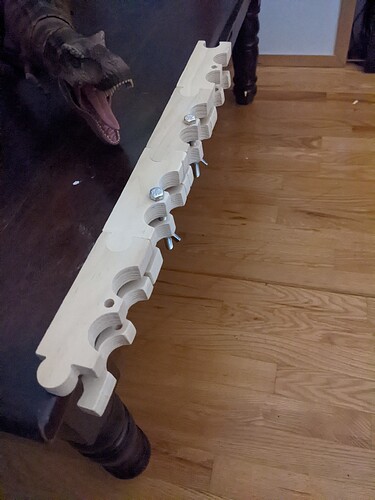