I am upgrading from my MPCNC to the LR3 for rigidity and am wondering if anyone has made the a mount for the DW 660 yet? I don’t necessarily want to buy another router but will if I need to.

I am upgrading from my MPCNC to the LR3 for rigidity

I don’t have a Lowrider, but reading on the forum, it has been my understanding (historically) that the MPCNC is more rigid than the LR for working areas below 36". I assume that is still true of the LR3.

As for the DW660, if you don’t find a mount, I’m sure there are people on the forum who would help you design a mount. I’d be glad to help if someone with an LR3 doesn’t volunteer.

If you decide to purchase a router, you might consider the Carbide 3D router. It is a Makita clone, and it comes with precision collets for 1/4" and 1/8" bits. You would save around $70 compared to purchasing the Makita and the 1/8" collet.

DW660 is definitely on my list, since it’s the router I will probably be using. I will try to get it done this weekend.

Yeah I’m running a 5x3 work area and didn’t listen to the warnings that it would loose rigidity. I’m going to make the Mpcnc smaller at a later time but I have bigger projects to do atm.

Did you get a chance to work on DW660 mount for LR3? Thanks.

Yes I have worked on it but it is not ready. I had an idea where I might scan a silhouette while rotating it to get the outside profile.

I captured this video with the intent of extracting the profiles from individual frames. Now I just have to write the program to extract the 2-D profiles and intersect them all. In my mind it was easy…

Does Fusion360 have a radial loft function?

By using the shadow from the sun I should get a good orthographic projection.

Awesome idea! Never occurred to me. Not sure if this helps but @robertbu made a model sometime back and posted it on grabcad. Checkout this thread.

this is awesome. you should post this on grabcad - i’m sure it will help a lot of people.

Oh I had missed that! I didn’t realize there was already a high quality model out there. Shame on me for not searching first.

Now I just have to write the program to extract the 2-D profiles and intersect them all. In my mind it was easy…

Dang, that seemed easy to you!? I need to learn more programming.

Does Fusion360 have a radial loft function?

Would not really work as the 660 is a super crazy shape. Compound draft angles and such.

that seemed easy to you!?

No, not easy, that’s not what I meant. It means in principle, in a hand-wavy way, it is straightforward and no additional leap of innovation is required. All the remaining steps are things I know how to do. In my imagination I see a path and “alls ya gotta do is…”

But it is a lot of work still.

I captured this video with the intent of extracting the profiles from individual frames.

That’s really fun. I am trying to decide how many unknowns you have to figure out. I know the angle of the sun and the angle you are holding it matter. But I haven’t decided if they are really just part of one unknown or not. But you know the total length, so you can force it to solve with that scale/angle.

Of course, the sun angle is a compound angle, unless you pointed the router right at it (which you might have, or close enough).

This is why they invented contour gauges though: 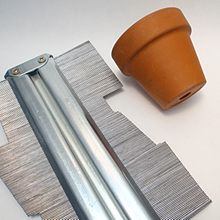 A profile gauge or contour gauge is a tool for recording the cross-sectional shape of a surface. Contour gauges consist of a set of steel or plastic pins that are set tightly against one another in a frame which keeps them in the same plane and parallel while allowing them to move independently, perpendicularly to the frame. When pressed against an object, the pins conform to the object. The gauge can then be used to draw the profile or to copy it on to another surface. Profile gauges are used w...

On the same subject, someone said they use a digital angle gauge (like a Wixey one) when they do CAD to get slopes on things. That is a great idea and I am going to try it next time.

the sun angle is a compound angle, unless you pointed the router right at it

Yes, you got it. Before starting, I oriented the surface to be perpendicular to the sun. Then I have a disc attached to the front of the router and I try to hold it so the sun is in the plane of the disc by actively minimizing the shadow as I rotate by hand. I have some M3 screws (at different depths so they are not ambiguous) and that should be enough to calculate the orientation about the axis of rotation.

Also, describing it now, I’m thinking a perspective projection might not be as bad as I thought. It requires precise knowledge of distances, but it is not impossible to intersect tapered prism shapes instead of straight prism shapes.

Not for DW660 but I do want to re-do my angle grinder, so this is not going away entirely.

you can’t use the stl’s for the mpcnc one? Or are you trying to make more than the rings?

Hey Jamie, how did it come out, did you get the 660 mounts made?

I’m sorry to say, this has stalled, as it is more difficult than it seemed in my head, and the precision with a photograph is lower than I had expected. Sorry, I can’t say if this will ever be completed.

No worries. I was having problems with my mpcnc. But they seem to have been fixed now. I am less leaning to the lr3 now.