Did a couple of cuts tonight, was thinking about adding endstops, and I noticed the Arduino board getting warm near where the USB port is. It was hot, but I could still keep my fingers on it, so I’m thinking it had to be under 120F or so.
A spent a few minutes a few feet away while I was soldering wires onto an endstop. Tested my connections with a multimeter to verify that a connection was only made when the stop was pressed down. Success!

If you hold the Arduino/RAMPS package with the USB port pointing up, I plugged my new endstop into the topmost endstop header. It’s not labeled, but some research on the RepRap site indicated this was the most likely candidate for the X minimum endstop. I connect to the Arduino in Repetier host, and start my first test, which consists of closing the endstop and seeing if I can move X-; my reasoning is that the endstop conducts basically no power and thus won’t hurt anything to short for a few seconds. As soon as I press the endstop - literally, the same second - the Arduino disconnects from my computer as though I’d unplugged it. Surprised by this, I release the endstop and look down at the Arduino/RAMPS package… which is now emitting smoke.

I dive for the power strip they’re plugged into - not having wired my emergency stop button fully yet - and turn it off, which cuts power to the power brick that supplies 12V to the RAMPS board. Of course, the Arduino will no longer connect at this point. That’s where I left it about half an hour ago. I suspect I’ll be ordering new logic boards soon, but I wanted to share this in the hopes that somebody else might learn from it. I don’t know what you’d learn though, so if you figure it out, be sure to let me know.

(All my parts were acquired from the Vicious1 site)

Attached pictures of my RAMPS board. You can see there’s an odd burnt area near the center of one edge and around the capacitors. It’s odd that there’d be so much heat on that edge, given that there’s nothing there. 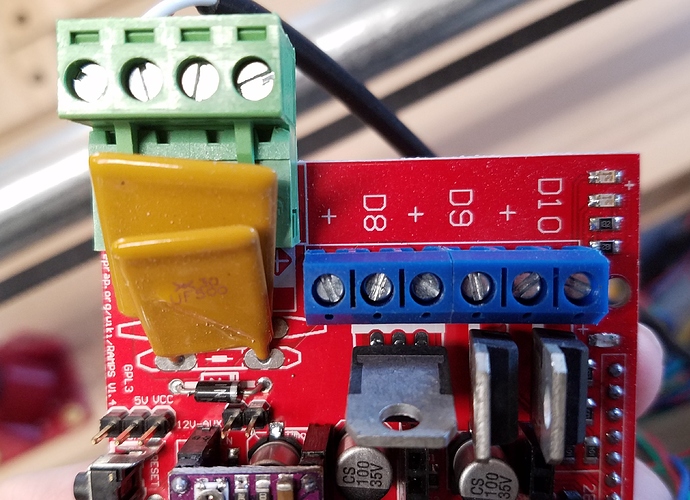 Can you center up the pictures on the burnt area? I don’t think I’m seeing it. It may be possible to just replace the damaged components. Also, if the arduino disconnected from the computer, my history says that 90% of the time, it’s a blown regulator and easily replaced…

Ahhhh, endstops, so simple, yet always a pain in the butt.

Sounds like you plugged it into positive and ground. You need ground and signal. There are three pins, you have to be careful which ones you use.

If you resolder that trace you will probably be back in business. Depending on what happened to the mega.

Vicious1: It looks like you’re right and that I plugged it into the positive and negative instead of signal and negative. The positive terminal is just there in case you’re using optical endstops, right?
I’ve attached some better quality pictures taken with my SLR right now. I think the 2560 may be toast as well, since my computer and laptop both don’t even get the “You’ve plugged in a USB device” notification when I plug it in without the RAMPS shield/cape/whatever installed. What trace are you thinking of? I can’t seem to find anything that actually looks like it went bad.

John: I think the damage is more visible in this set of pictures, but it doesn’t appear to be adjacent to anything. 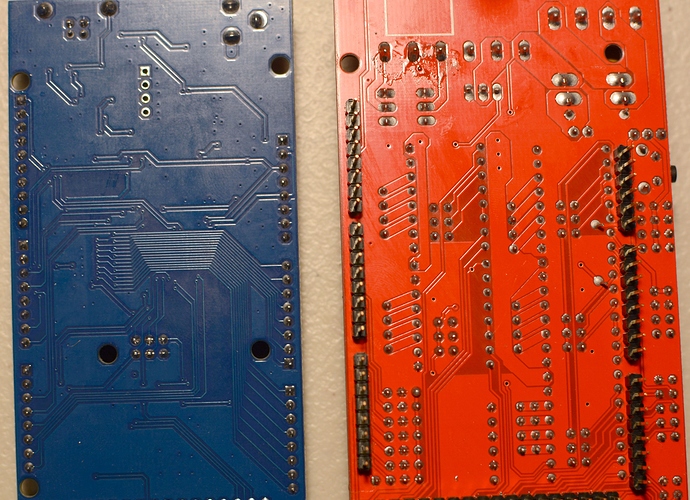 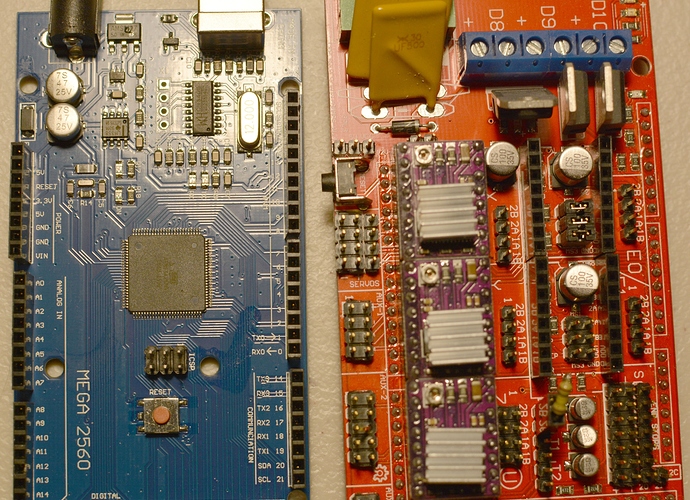 Your voltage regulator is fried, as John Said. See the little burnt pinhole in the black component closest to the mega’s power jack? They can be replaced but a new mega isn’t too expensive. If you can’t find a good deal let me know, I either have some boards you can have to try and salvage one or I have a spare mega I can sell if you can find a cheap one on amazon or ebay.

If you want to give replacing the regulator a try, PM me your address (assuming you are in the states) and I’ll mail you a couple regulators… i have a few spares…

Thanks, John! I’m not confident that I won’t just burn a hole in my board, but I’m excited to try! You should have a PM from me in your inbox.

I followed your video’s advice and was able to get the voltage regulator off without melting anything else important. The housing for the 9V connector is a little goopy looking now, but it’s unused anyway.

I got two voltage regulators from John on Friday, and I installed one this morning, but I’m still getting the same result as before: plug into computer, nothing at all happens and Windows doesn’t detect anything. The lights come on, which is promising, but not especially helpful. Given that a new board is only $12 on Amazon, I’ll probably go that route and just not plug in the steppers the wrong way this time.

Or pay the stupid tax for something else. We’ll see.

Thanks for your help, guys!