Hello again! I’ve got another fun project to share that will be taking its spot next to the recently completed pinball machine.

A legitimate game room is something I’ve been dreaming of for a very long time and I’m super excited to finally see it coming together. If it were not for communities like this, I would never have developed and honed the skills required to complete such amazing projects and I just want to thank everyone here, especially those of you who have encouraged me along the way.

I remembered to take a few pictures this time — more than usual, at least — so I’ll do some progress shots before the reveal.

I cut out recesses behind all of the buttons and joysticks as I knew I was going to be adding a 1/8" protective layer over the artwork. This plywood is a bit hairy… 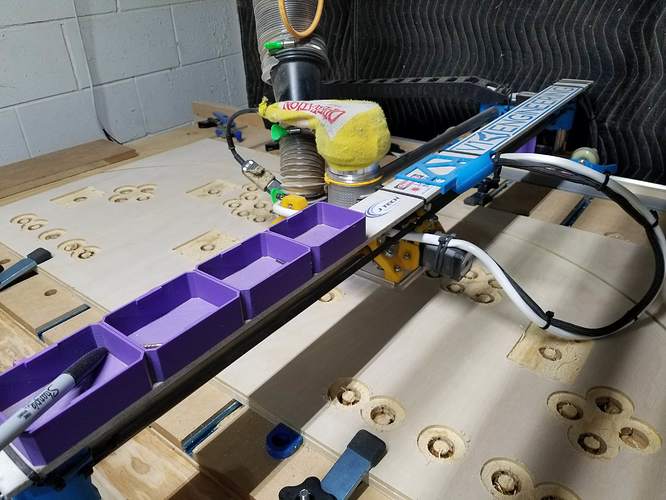 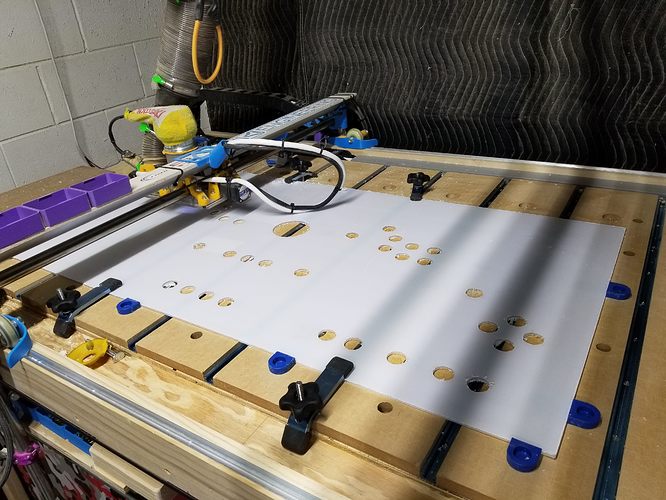 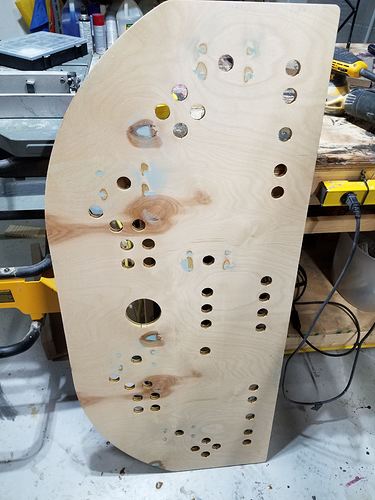 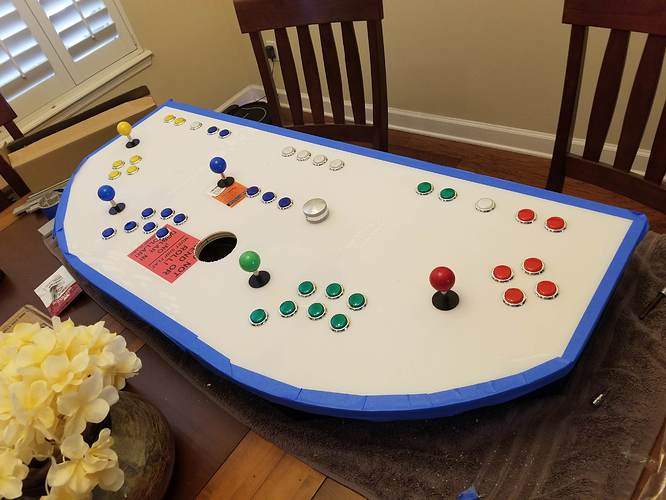 It gets worse as it goes. Each button has 4 wire connections, switch +/-, and LED +/-. The last wires are daisy-chained ground for the switches, and daisy-chained power for the LEDs. 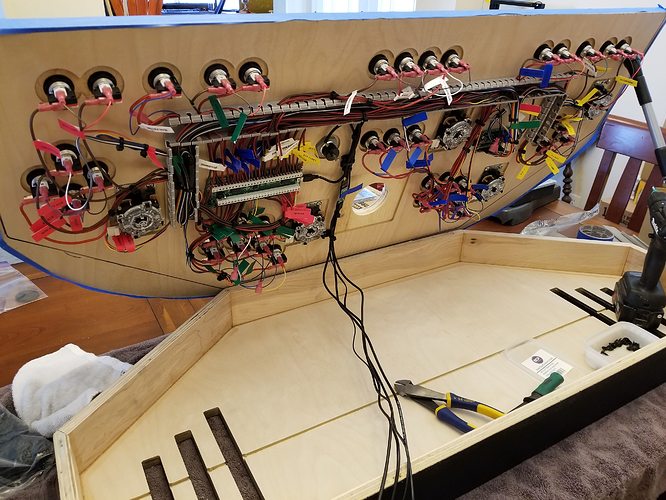 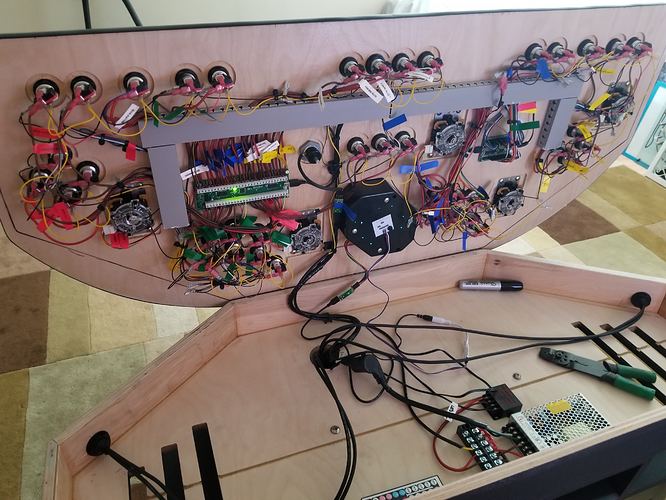 I designed the control surfaces myself, but must give credit to artist Michal Kváč for the background image found in Synthwave Dream 4Pack.

And finally, finished and trimmed… 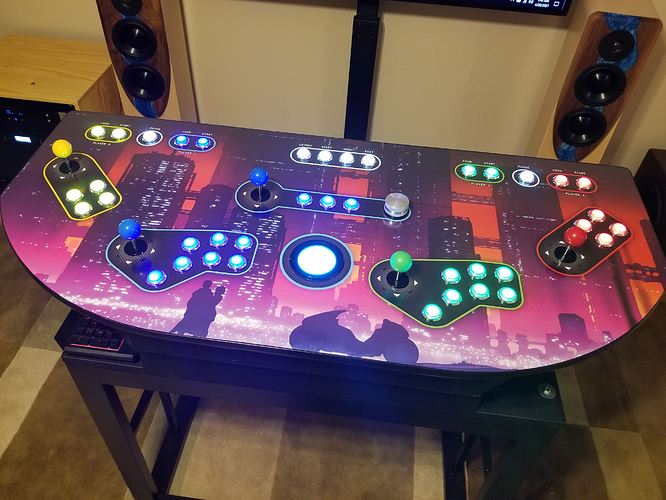 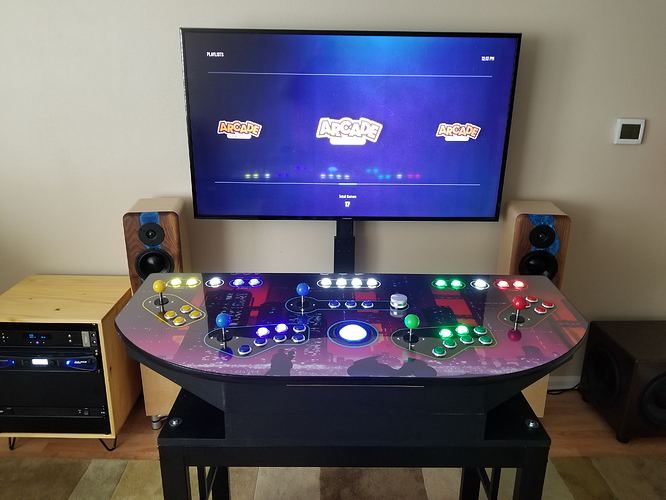 But perhaps the coolest thing of all…IT TALKS!

I had no idea this feature existed when I picked up the PacLED64. I knew that it could manage individual LEDs to only light up game-specific controls. But I did not know that it would announce those controls to you at the start of the game! 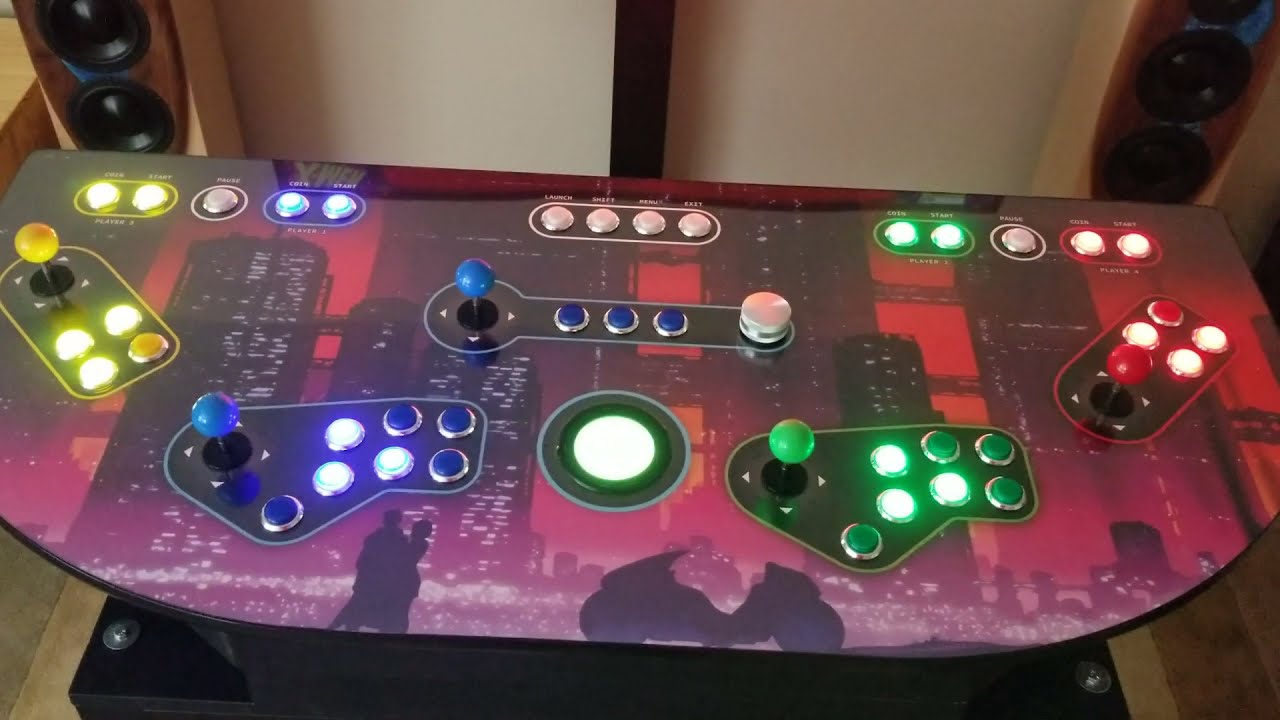 These lists are not conclusive. I also used a 12V power supply, buck coverter, USB hub, and various other devices to make everything work. Also, I just want to be clear that I don’t get anything from posting these links here. I simply know that I spent a lot of time researching this project and hope these might help someone else looking to build an arcade control panel.

This has been an amazing project and there is still so much to do. I have used console emulators before but never realized the added complexities of MAME — full sets, split sets, merged sets, CHDs, samples, and so on. There was a bigger learning curve than I expected, but I’m excited with the results. And LEDBlinky is way smarter than I expected, already able to parse out the control schemes for most games; however, there are still some games for which you will need to learn to manually configure controls. All in all, a totally worthwhile project.

I’m making a simple flight simulator panel with my brother, and we are bending our brains to figure stuff out. This is really another level!!

I will say, speaking purely from the standpoint of an arcade emulator, the IPAC-4 was my saving grace. It’s essentially a keyboard interface, so every button and joystick input (up, down, left, right) is tagged to it’s own specific key on the keyboard. This completely takes Windows device assignment out of the equation and makes setup SO much easier.

For a flight sim, I imagine you have to deal with analog inputs which could certainly be more of a challenge.

Super neat! The switches and lcds are hooked up to an arduino mega 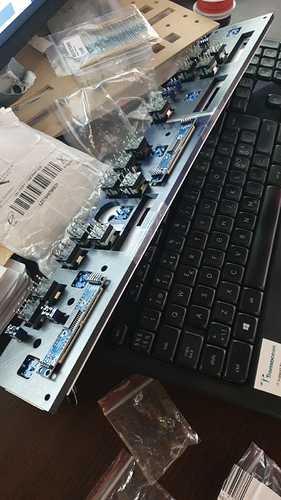 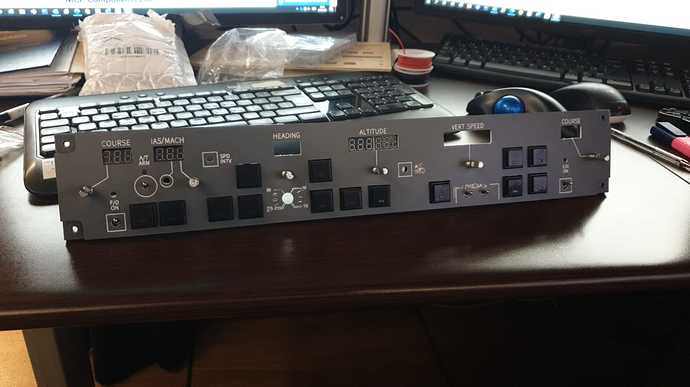 On the software side, Mobiflight is used to communicate with fs2020.

That’s going to be really sharp! I love what you’ve done so far. Great attention to detail.

Is there some kind of harness for those buttons? It looks like 8 or 9 pins each from the image. I don’t envy you if you have to solder all of those individually.

No harness, gnd in daisychain. Not all pins are used though! They have good training, another panel (FMC) had 550 solder points

My attempt at an FMC… 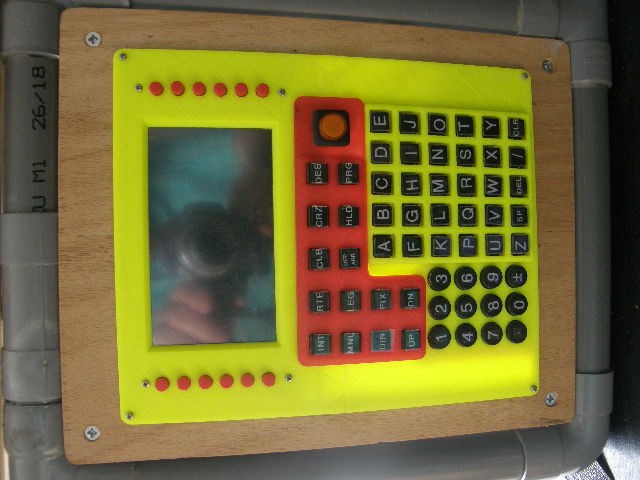 OK…so the colour is not quite right! also…not sharp!..but it is functional… 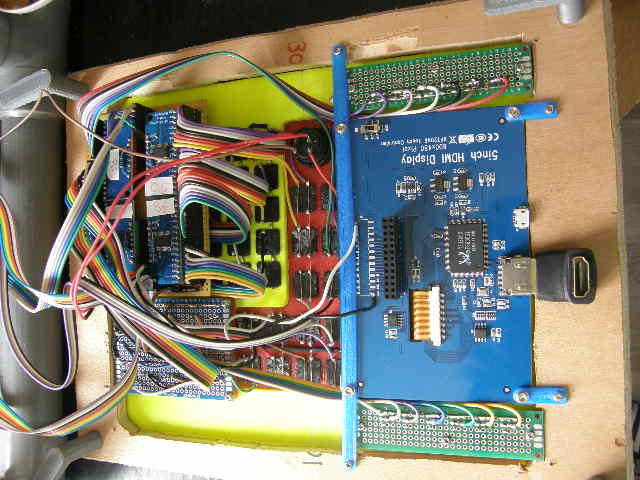 also made a 530 GPS, a comms panel, a jetliner autopilot and the ubiquitous Cessna switch panel.

As an alternative to a hardware joystick controller there is an Arduino library by MHeironimus that allows you to assign functions to up to 32 buttons and 6 axis’. Here is a link to my 13 button, 5 axis helicopter joystick sketch using this library.

Perhaps we need a new thread on simpits.

There was a real fmc button panel on ebay a while back that a dude converted to usb. I really wanted one, but the $250 price tag killed the WAF on it.

This one was 150 eur. Postage, Arduinos and power supply and such comes extra. 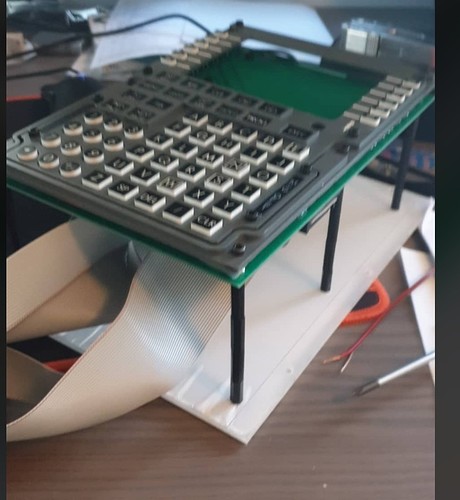 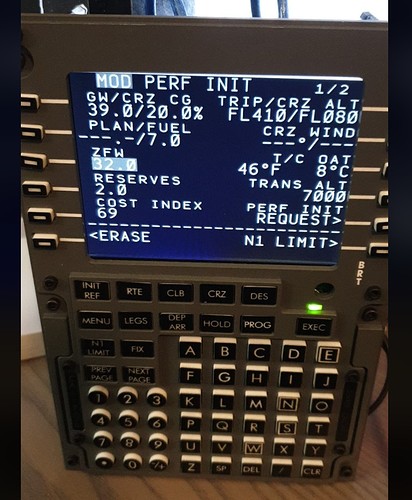 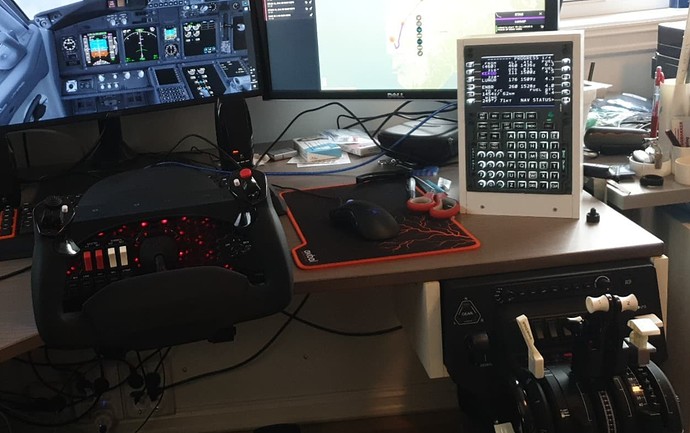 That is really cool! I mean…BONKERS execution. Well done!

Just let me know if you want the source. I’ve got no bragging rights! It’s my brothers, and he is the FS-enthusiast. I’m just the dude with the 3d-printer and the CNC

And @Matticustard, I’m sorry for hijacking your thread! You deserve all the limelight for the arcade box, it’s really awesome.

I added a 21:9 monitor I managed to get cheap from eBay as marquee for a bit of extra. I may trim that pole down a bit so it’s not poking out the top, but otherwise I think it’s all coming together. 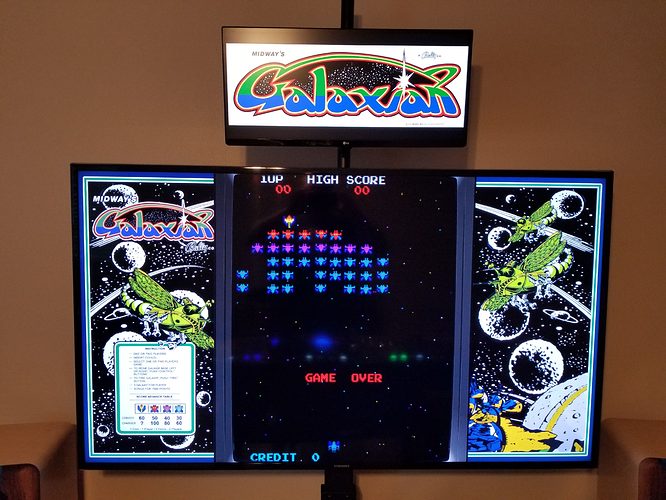 This is really inspiring work!