The first thing is that I may need to slow down the program a bit and pause between steps as it did not raise the z axis. I thought I had this fixed, but it waited until the last pass to not go up and cut on through to the final cut. The coupling did not slip.

Second thing is what looks like the machine is possibly out of square. Previous cuts haven’t looked like this, but the outer circles appear oblong. 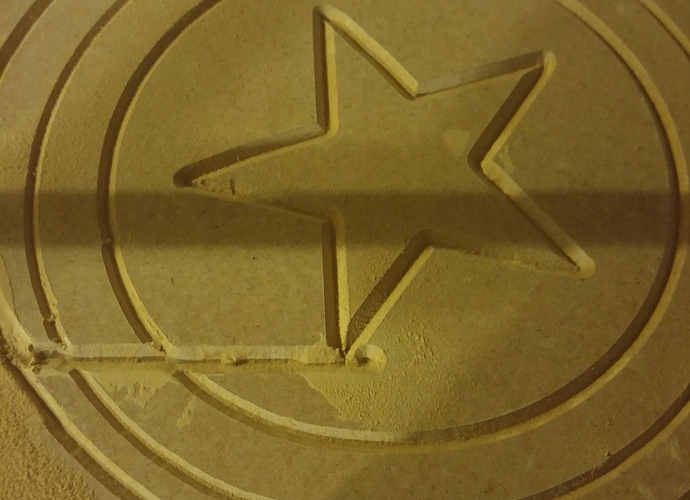 Mine occasionally does that (not raise the z) too. I had been attributing it to the driver getting too hot… I made that assumption because it would get better and make more cuts before error if I let it cool between cuts…

Although, I’m very interested in what you’ve done to fix the issue just in case I’m wrong…

I think I should push out the new beta marlin firmware. I would say make sure the z driver is set to 0.65-0.7V, change the z acceleration to 40 in the firmware (your z is probably not super smooth for whatever reason), make sure your setting are correct in estlcam.

As for not square because of the large build area just do a quick check before every important cut, I measure all 4 rollers form them to the nearest corner block. Each side of the axis should be the same distance. This can get pretty far off if you are cutting in the corner, easy fix.

Your z axis looks really long (seen by the wobbly cuts, or you just cut too deep in one pass), that could also be part of the problem. Cuts should be made at a minimum z extension. Stack things under your cut to raise it up if you need a long zaxis for other things but if you are cutting all the time I highly recommend a much shorter machine. I do this and it can be seen in most my videos, my z axis is about 4 inches (pretty long for a mill/router).

Do some test cuts in HD foam and move to wood, sometimes its easier to spot the issues that way.

Most of the time, my z works fine, but it seems that an occasional job decides to skip going up when changing paths.

For this run, I attempted to make 2.5mm passes, which may have been too much I admit. Each path had different depths (4mm, 5mm, 6mm and 6.5mm to cut through) so those with the deeper overall cuts likely struggled. This was using a v bit and the first pass was done without much effort, but the second pass along the outer circles were deeper. Thinking about it now, the extra stress may have aided in becoming out of square during the job. I squared it up in the beginning using these Square Check

I made the z axis height to match the 12 inch threaded rod, but my legs were cut shorter. I had cut the conduit for the legs to a length of 6 inches to match the default cutting area in the calculator. Right now, the height is just enough to where I can raise the Z to the max and just be able to swap out end mills and bits comfortably and slip on my dust collector without having to remove the router from the tool holder. I intend to build a more permanent wasteboard platform which will raise my work area another inch or so.

I had done several cuts out of foam as well as a bunch of sharpie posters. Just recently, I’ve been more seeing what I can do with wood materials.

The square check parts are not a good idea. You would square your axis and then have to move it to get them out. Just take a minute to measure them with a tape measure and you will see how easy it is.

I would still raise your material up as high as possible, you will see a huge difference in rigidity. For every half the length of your Z is 2 times the rigidity. Biggest possible upgrade is getting the material as close as possible to the z axis as high as it will go.

I use similar a similar squaring tool. I put in the bar square it up then use repetier to move it out and back to 0,0. My 0,0 is where the squaring tool holds it.

As for raising the material… I shortened my legs by 3 inches to 5.5 inches from 8.5. That makes a substantial difference in even just the rigidity of the frame. I decided I will most likely not be doing any printing on this big beast

Be careful with that, some of the gcode I use goes negative first. When you start a piece at home and cut it out two of the cuts will be negative first driving into the squaring tool.

I do something similar, but I use the LCD controller to move to position. The squareness holds up until I manually move the axis or bump something. I had used a tape measure before, but didn’t feel that I was getting an accurate read. With the conduit being rounded and measuring from one to the other, I felt I was more estimating and could easily be off a millimeter or three.

I measure from the roller to the point of the corner assembly.

anything on the beta firmware? the 3dp works much more happily with repetier server than does the cnc…

or… do I just need to change the config settings that are on the marlin page here in the latest beta from the marlin site?

Here is the one I have but the Marlin people already released a new one. Things are weird with these right now so you might need to use a different version of arduino, one or to updates back. The easiest way to do that is not download the installer. The others run without install so you don’t need to go through all that hassle and re-update ect.

Dropbox is a free service that lets you bring your photos, docs, and videos anywhere and share them easily. Never email yourself a file again!