hey guys, I’m sure I’m missing something but I cant figure it out…
just about done my build, done enough for some test runs.
so I took the “Vectorlogo1nodrips.dxf” file that was emailed to me when I ordered my parts.
opened it in “estlcamV8” made a new tool bit to resemble a ‘Sharpie’ Marker to test with, used engrave and set it all up, watched the preview… Looked great!
so then I saved the cnc file as ‘TEST.nc’…
opened it up in “Repetier-Host” (Since “Octo-Print” wont accept my .nc file) and went to the ‘edit g-code’ tab, did not touch anything but the 'Save" icon…
Saved it to my desktop as ‘TEST.gcode’…
Opened it up in “Octo-Print” and sent it over to the ‘MPCNC’ and it went to town with the ‘Sharpie’ tool…
after 4 mins it was finished butttttt backwards…
Can someone tell me what I keep doing wrong??? 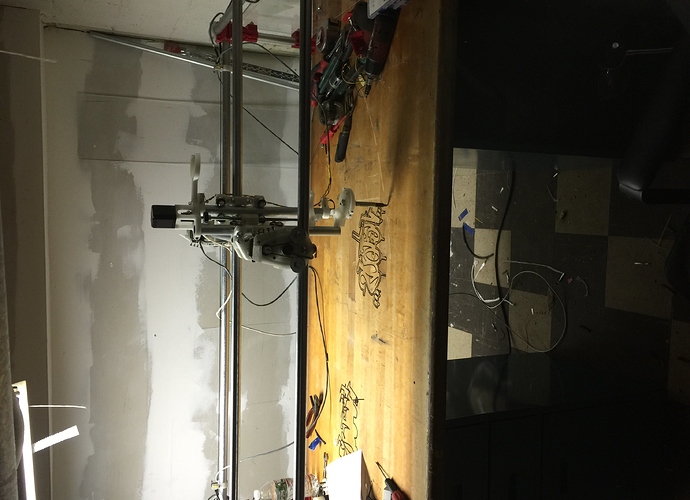 Your X axis is backwards. There are a few ways to handle it. You can unplug the X axis connector from the ramps board and flip it over and plug it back in. Another way is to go into the firmware and invert the X axis. I’m not sure which is the “best” way, but either of those will reverse your x axis. Flipping the plug is fast and easy.

Ryan will respond eventually with a much more experienced answer, I’m sure, but it wouldn’t hurt to just flip the plug and give it another try.

aww dude thank you so much, cant believe it was something so stupid, but thank you its working now!!!

Don’t worry It happens all the time. I think it was actually my very first post, the reason I started the website. I got asked so many times why it was going the wrong way!

yea, mistakes happen… but as for my process of getting my files to the table, am I going about it the right way or is there a much much easier way then file hoping threw a chain of programs?

The 2 way I do it. I don’t use octo.
Estlcam, save, open with repetier and run it.

Estlcam, save to sd card run from lcd screen.

I have a few ways, depending on what I’m doing. I only use the SD card and LCD method.

ok cool, thanks guys! appreciate it a lot. what laser are you working with? I’m gonna order the tech 3.8 kit

I think that most of us are using the 2.8 watt kit. No complaints thus far from me

How do you like the 2.8? Ever wish it was just a little more? Can you do glass and stone and aluminum?

So far it’s been more than enough for what I am doing (wood and leather engravings). I tried anodized aluminum but I can’t say that my issues were too little power - I don’t think I had it focused well enough bc Jay from Jtech has demonstrated the capability with the 2.8W.

I have not tried glass but a mirror is on my to do list. There is another thread around here all about the laser and people’s experience.

The 3.8W would allow you to cut things faster, but I would think the engraving speed would be the same. I don’t think our machine is setup to do very high speed engravings due to the size and inertia of the middle assembly. This is just one opinion so think about what you want to do and see if it is worth it.

I am real happy with my 2.8W JTP laser. I have only scratched the surface on it’s abilities.