Wondering if there are other extruder options for the V2 MP3DP and if so what are they and do they mount the same way with the extruder strap or are there other mods or X carriage mods for different extruders?

Even thou this is now replaced by the V3/Repeater, im currently building 2 that are the V2 i3-style. I’m using Biqu H2 extruders w/ everything else standard and created some mounting brackets, took someone else’s part cooler off Thingiverse and created a BLTouch mount that centers on the Y axis and offset on the X axis using a custom fan shroud for the extruder. currently refining my designs, but i’m juggling several projects of my own (like a LowRider2 to make the milled parts)

I use a titan knockoff (initial design) on my MP3DP V2.
I had a real E3D titan aero, but even though I liked the more compact design conceptually, it was much harder to package a bltouch probe and service.

I designed a mount that is integral to the x carrier.
It has a flange that sticks out in the yz plane and is sandwiched between the stepper and cold end.

It works well for me. The part cooling fan shroud I’m using is far from ideal, but is mostly adequate.

[quote=“InoxDragoon, post:2, topic:31040”]
Biqu H2 extruders
[/quote] Sure I am just staring to build the V2 have not decided on the extruder yet.

Okay - I’ll put it here or thingiverse with a link, but probably not until Sunday.

I’m sourcing a Hemera for my next build but the titan clone has actually been very good to me and was way cheeper.

I cut a MP3DP V2 frame over a year ago and I was recently cleaning my garage and found them collecting dust. Rather than throwing them I’ve decided to build it out since I have some surplus printer parts.

The frame is made from cheap birch ply from big box.

I cut out both Y plates and I have bought this heated bed. https://www.amazon.com/gp/product/B08B1CGJ3W/

I will use the regular Y plate but curious to know if the extra weight is going to cause any issues.

Lastly for those who have built this in the past did you leave it stock or did you add any mods to it?

Wondering if this side to side slop will go away with them lubed and tightened down or did I end up with the wrong rod/bearing combo ?

Mine is pretty much stock and works great!

I posted the Titan extruder mount I mentioned in an earlier post on thingiverse: 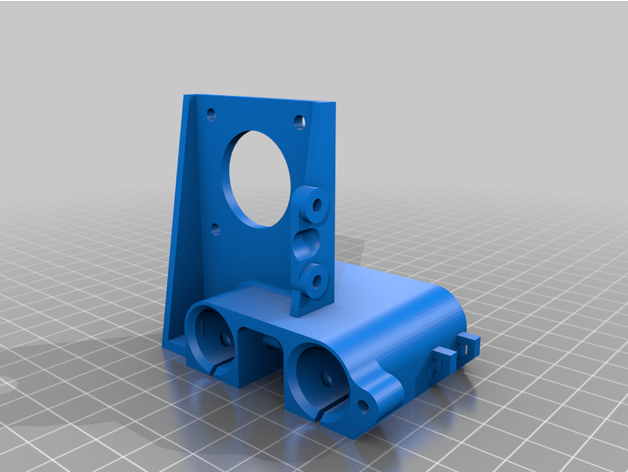 An integrated mount/x-carriage for an E3D Titan extruder on the MP3DP V2 printer. The mount also has integrated BLTouch features. I like the original titan better than the aero for a couple of reasons and this provides as compact of a mounting...

I am using “single start” lead screws for 2mm/rotation z. The thought was I’d get more precision, but I don’t think it is even perceptible. I also put anti-backlash screws on, but they dont do anything at all.

I did add some LEDs so my webcam has enough light when the shop lights shut off.
Ran it with a RAMPS and 8825 drivers for years. Recently switch to a smoothie board because a co-worker gave it to me for free. I don’t see any print quality difference, but figure it is less likely to catch fire now

At $75-90, this one can be a tad pricy, but its small, light and adaptable. its also all metal, so ABS/PC/Nylon are a cake (room and bed issues aside). Here are the pics of my assembly, but I don’t have a link on thingiverse for these yet. It’s not even on my printer yet as my MPCNC-LR is having software/teething issues.

Huh. My general doesn’t have screw holes on the top.

That looks like a great design. And the fact that each side is independent (instead of combining everything into one mount) means you could easily find a different touch sensor or fan duct without designing everything from scratch.

That looks like a great design. And the fact that each side is independent (instead of combining everything into one mount) means you could easily find a different touch sensor or fan duct without designing everything from scratch.

Also, since it’s ABS, i lose one small part instead of scrapping the whole thing. also gives some flexibility in mounting w/ warped parts and minimizes fitment issues… on the downside, precise verticals are impossible. Since it’s plastic, thats not a huge deal, but can lead to 1st layer and bulging issues. but that’s every mount…lol

This extruder is super attractive on paper.
Dual drive gears with 7:1 reduction and “standard” pancake stepper instead of the proprietary one on the Hemera, plus around half the cost and half the weight… 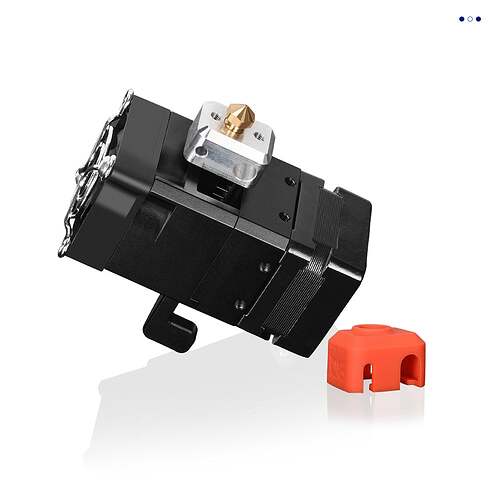 I originally wanted to put it on my AnyCubic i3 Pro, but i would lose about 5mm on the right side since the Z is behind the vertical gantry, instead of in front like every other i3 clone.

I first heard about it from Design Prototype Test on YouTube:
GAME OVER For Hotend/Extruder Design? - The Biqu H2 Direct Drive Hemera Alternative - YouTube

it’s a fantastic plastic pusher that’s compatible with V6 nozzles (which also means Bondtech CHT compatibility), so I don’t have to buy into yet another ecosystem, and some versions come with the dragonfly hothead from phaetus, but the one i have is the blockier pre-merger type so socks might be an issue. I currently run the dragonfly on both my Mega Pro and Voron V2.4 and love it. I have a spare that i might see if it’s plug-n-play, but not too concerned at the moment. Other than the Sherpa Mini, it’s just about the lightest direct drive out there.

Be warned, the kit comes with 24V 35mm fan and heater, so if you’re going 12V you’ll have to source those on your own, which is another reason why I stuck with the DragonFly.

As for my mount, I still have some wire pinching issues, so I have to modify the top and bottom brackets a smidge more, but I’ll update here when I post those files.

I just placed an order for one - the 500C version. I doubt I will use anything other than PLA and TPU, but it was only ~$7 more (+$12 in the cart, but it got me into the next higher promo bucket

) and comes with a 70W heater cartridge so I figured that might help if I try to push the speed on it. 24V shouldn’t be a problem - I was probably heading in that direction anyway.

I laid it out on the MP3DP Repeat blank tool plate and got the nozzle in the same position as the Hemera with very little effort. I am hoping to use your cooling fan and BLTouch mounts when available. Shipping is 15-20 days, but I probably won’t have the rest of the printer done before then anyway…

I am hoping to use your cooling fan and BLTouch mounts when available. Shipping is 15-20 days, but I probably won’t have the rest of the printer done before then anyway…

I did it anyway, so most of what said below no longer applies (except the need for edits)
BIQU H2 Adapter Parts for V1Engineering MPCNC V2

I should have my design done by then, even thou I’m playing the game of micromanaging millimeters at this point… lol

The cooling fan I’m currently using is someone else’s design, but I had to file around the profile of the fan to reach the mount screws, and as mentioned earlier, i wanted to make it not touch the hotend. With the sock and printing it in ABS/ASA I don’t think it’s that big a deal, but if you do decide to print @ 500C you’ll probably need it unless you get the pheatus hotend since that’s what it was designed for. my block is not only rectangular, but the nozzle isn’t centered. it’s an easy fix, but I’m working on a SKR2 Electronics box for the MP3DP V2 since i plan on using klipper with dual Z endstops (probably a derived part for the right side somewhere, or a simple mirror of the RZ motor mount and a drilled hole on the YZ side…lol).

There is also a fan mounted BLTouch mount on there, but it’s not centered, and you have to look in the comments to find the offsets.

yeah, i was torn…lol… lead time and ease was my deciding factor for the H2. I’d rather sacrifice Z than X, but the H2 was a one and done.

My Voron V2.4 uses a Galileo (orbiter) and I love it. but that’s a chonker on Z and Y

Huh. My general doesn’t have screw holes on the top.