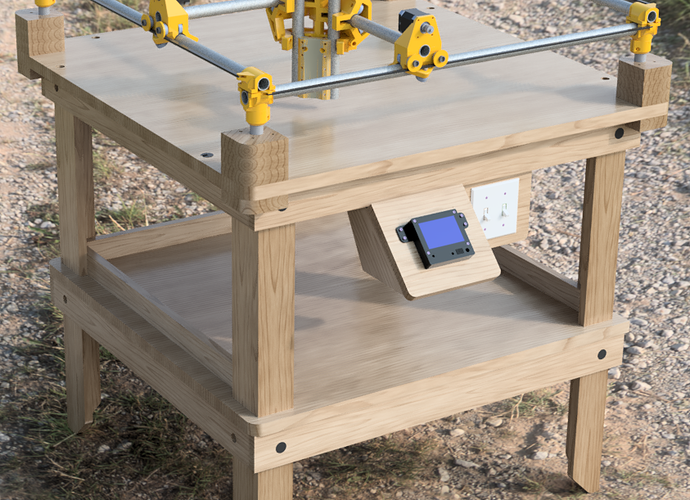 So it is approx (rounded) 3’ x 3’ 5ft tall. Any idea how much the whole thing weighs? Can the MPCNC be easily lifted off the table? As it stands now how do you power it up and go?

The top, shelf, and blocks EMT is embedded in are 1" and the rest is 0.75". All wood parts are Purebond cabinet plywood. Two people can move table with little effort and it easily disassembles to pass through doorways or for transport. MPCNC could be removed (with effort) from table’s top but its easier to detach entire top from the legs (8 1/4-20 SHCS) and leave MPCNC intact on top with electronics underneath. Enough clearance was added for legs to be a very snug fit in corner blocks - which eliminates the inevitable wobble from combination of the hinge-like corner connectors and various foot efforts. Everything was cut on a commercial CNC. The ugly control panel rotates down and under table when not in use. It’s using a 12V/18A Dell power brick (very clean switching power supply). I modified Marlin to make it a bit more router friendly but now with the availability of $20 32 bit boards (SKR v1.1 and 1.3) I’d ditch the 8 bit controller and use Smoothieware in CNC mode with a Toshiba FlashAir for WiFi file transfers.

Thanks for the reply. So Brian I am new to this…Is this ready to just load up a file and start cutting? A good machine to start with and learn?

I wish you were a little closer to Mobile…I live in Biloxi, MS.

Yes, I could power it up and cut a minute or two latter, There would be a learning curve for someone not already familiar with it, terms used (Marlin is 3D printing software running a router), and CNC’s in general before they would be comfortable in the same position.

The $20 controller upgrade I mentioned running Smoothie would be much better for a beginner in terms of interface, configuration, and firmware stability. Marlin (even on a 3D printer) is a nightmare and will always have issues during any and all attempts to maintain accurate step pulse streams with a fairly stupid 8 bit microcontroller.

Can’t decide if I’d recommend MPCNC, I’m kind of neutral there for anything not made from steel due to daily exposure to commercial equipment.

Built second MPCNC (in a box to eliminate the leg wobble) for use as a 3D printer but haven’t gotten around to mounting an extruder. Use it once in a while to engrave with Dremel and 4th axis. Rendered image (I’m not much of a picture-taker…). 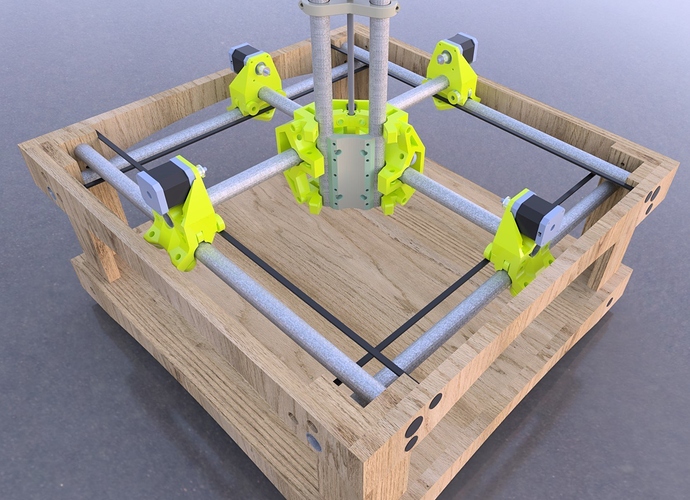 Well Brian if you were closer I would probably buy the cnc from you. Let me know if you travel south anytime soon…

Thanks for the reply. So Brian I am new to this….Is this ready to just load up a file and start cutting? A good machine to start with and learn?

I wish you were a little closer to Mobile….I live in Biloxi, MS.

Ah, small world. I’m in Ocean Springs myself. Finally pulled the trigger and purchased everything needed to get started on this. Now to play the waiting game.

Are you still trying to sell this?

Yes. Same condition (only use was initial test cuts). Lost interest, too many other projects, so never got back to it. I’ll also include the smaller project (assembled and motion tested but no steppers or electronics) with it. 2 for 1.

That’s awesome! I would be traveling about 2.5hrs from Atl, could you provide any photos? I am currently waiting to hear back from @twolf to see if he sold his today or not. If he has sold it, are you available tomorrow?

He just informed me that it has been sold.

Motor/shaft/nut and sensors on the small machine are not included (but are generic Chinese/Amazon/eBay components). Masking tape on display housing highlights a couple of 3mm fasteners that were never installed. Wood components (except the pictured spoilboard) were cut on a commercial CNC router table from 3/4 and 1" PureBond oak plywood.

The two mains switches and (included) solid state relay for spindle were never wired. Large table is bigger than it appears in photo - table to floor is apx. 35in (an odd number, but it guaranteed that the pictured speaker - not included - would be at the same height as its mate on a different table). Plotter pen drawing (from lowres JPG) was first test while spindle mount was printing. 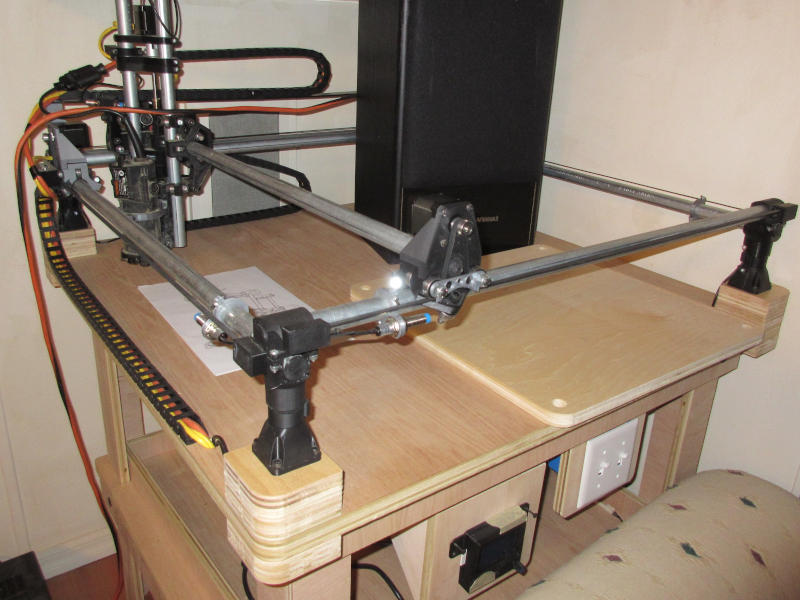 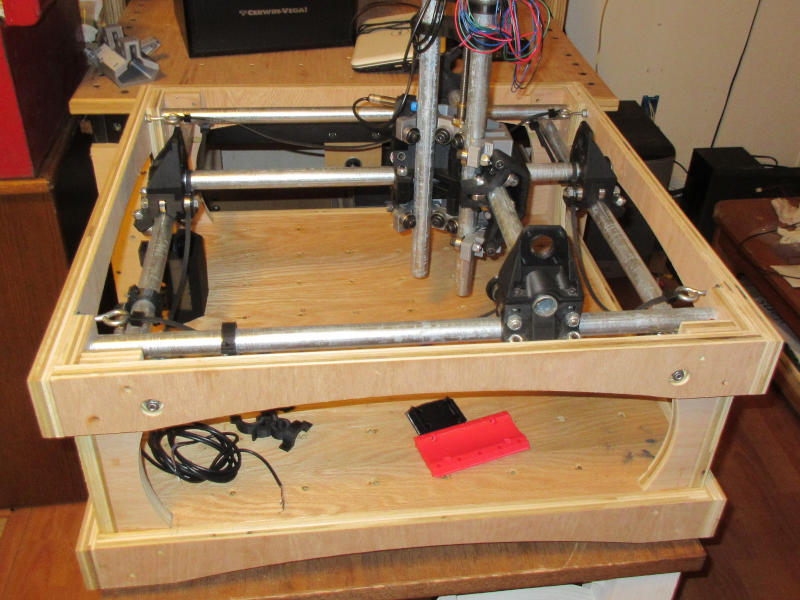 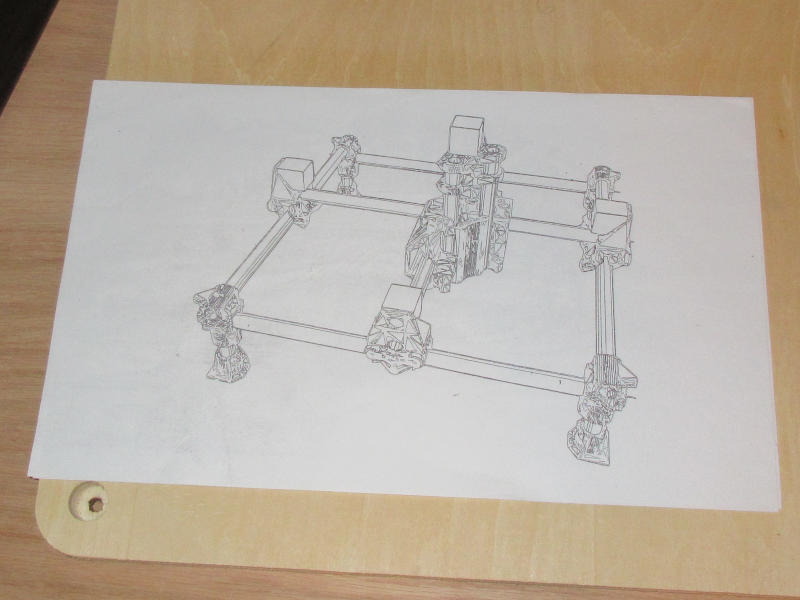