Title says what I am trying to attempt. I am really tight for money and I really wanna test cut (lightly) some aluminum. I have done a lot of reading on the forums so I know about the whole z axis being short idea. I will definitely do that. But what I am trying to attempt is to instead of using a router like the dewalt 660, use a hobby brushless motor. This motor will be powered with a big 12v server power supply capable of about 100amps or more.

You may at first think, probably not enough power. I am using a castle mm2 esc, and a TP Power 3650 motor. To put the specs in perspective, the ESC is capable of 6s lipo (about 25v) and 90A continuous w/ cooling. The motor is a 36mm can 84mm long brushless motor. This may seem small at first, but this motor is a machine, a very power dense beast, known to be one of the best hobby brushless motors you can buy due to its quality of windings, stator, etc. It has a peak output of 4500w, continuous of 2300w, much much more than a dewalt. The motor is 3080kv, it does 3080rpm (no load) per volt. I was thinking w/ a 12v power supply, this would be about 38000rpm which is a little on the high side so I will use a single flute carbide to help reduce the load.

Compared to a dewalt, it is pretty much all positive except for cost but I already own this for something else. It is more powerful and due to the nature of brushless, it can maintain it’s RPM a bit better under load, but probably not as good as a proper (but way more expensive VFD). It is much quieter, it is actually almost completely silent except for the bearings spinning. It is about 3.5x lighter, and smaller. It probably has comparable runout I would imagine? The only thing I can see maybe an issue is maybe the bearings decaying from the axial load overtime since they’re not that beefy.

So the power is there, and it turns out there are 5mm shaft to er11 collet adapters. I will make my own mount.

I will mount the ESC near the ramps and provide it ample cooling. I will extend the 3 phase wires all the way to the motor. I am down sizing the machine and I will be using 10awg silicone wire to extend the motor phase wires to the ESC. To power this, I will be using like I said a 12v server power supply capable of about 100amps. I think 1200w is enough, but these motors can burst a decent amperage so I will overkill it a little.

So would this in general be a viable option? I haven’t measured, but I could imagine the brushless motor I am using has somewhat comparable runout with a router? It is a little bit more “fancy” in its design but not as rugged. It is also MUCH quieter, it is quieter than most 12v fans.

Those motors aren’t designed to take an axial load like that. It would probably do alright doing something like foam for signs and whatnot, but anything harder will kill the bearings pretty quick. That said, I have seen it done somewhere on the internets. Unless you already have the motor and electronics, just save up a little longer and get the dewalt, they’re not that much more expensive than the motor you’re suggesting.

That is what I was thinking. Maybe I could implement another bearing in my Mount, one designed for axial load? Could go between the couples and the shaft if I had room.

I think it will be hard to beat an actual router’s (or the DW660) value for what we are doing.

The big advantage of a brushless motor is that it should be much more constant RPMs under load, so if you were doing the tachometer thing, and setting the speed, then it should stay close to that RPM through the cut (if it doesn’t you’re probably pushing it too hard). Also, if you can configure the speed control on the arduino to be the PPM of the ESC, then you’d have a way to control the speed (and start/stop) from software. That would be neat.

But I just can’t imagine it being cheaper than the dewalt. I also worry about durability, especially the axial load stuff, but even without that, it seems like the dewalt does pretty good even when it’s covered in muck, and vibrating like crazy, and digs itself into the spoil board. Since it’s meant to cut grout and stuff at the hands of anybody, I think it’s going to last at least 100x longer than the brushless stuff, as long as you replace the brushes. I could be wrong, but that’s my gut.

Another gotcha is that it won’t be pulling max current until you are in the thick of a tough cut, and the current it will pull increases with the power needed to keep that speed. So you can set the speed at 10%, and then screw up, driving into the material too hard or something, and the current will quickly go to max, then you’ll find out if the ESC and power supply can handle that much current. On the brushed motor, it will just slow down.

I don’t know which wires should be longer. You could put a big Capacitor at the end of the 12V, near the ESC (the ESC should have one, really) to reduce the ripple. If you have the three wires longer, you’ll make a ton of electrical noise.

Very good points, I will consider them. I already have the motor and ESC for a different project if mine. I thinly my new plan for it is to somehow allow an overcurrent switch besides the power supplies one. This system is used to high amp bursts, as long as you keep it cool, you’re good. I think I’ll try adding extra bearings to the shaft to promote the motors life. I do agree a dewalt is easier, its almost plug and play. Using brushless just sounds so cool though

I’m going to look more into it.

You guys seem to have covered all the bases. The last large motor I had, a big 190kv, came with an adapter for the other side of the can so you could mount the prop on the other side instead of the shaft. If you have that it will help significantly by adding a bearing on the other side, adding one to the shaft side will not do much.

At the same time adding one at you er11 adapter will work as well. Most fancy adapters are a stack of bearings or 2 thrust bearings.

If you have it on had, go for it, of course it will work, and speed control is nice as well as having full torque at all rpm’s. For anyone else a custom er11, Motor, large esc, large power supply is going to be much more expensive than a 660 that comes with a warranty.

Can’t wait to see it, another idea for a “pro” model option.

I can’t add a bearing in the other side. I know what you’re talking about, the outrunner style motors with adapters on the back side. I have an inner style, the shaft has the magnets. The shaft in the rear doesn’t come out at all, it is flush against the can. My only options is to add a bearing near the collet to put the axial load on the mount.
This isn’t an ideal setup, it is quite overly expensive. Though I see good potential for a brushless system that can be better than a dewalt but cheaper than a proper expensive spindle.

For anybody who cares, I decided to delay this until I make my own MPCNC Pro Edition. It will have the new t8 leadscrew, stainless conduit, brushless motor spindle, the works. After reading the advice, my situation works better with a dewalt seeing as I just want a quick step into milling. When the new feet for the mpcnc get finalized though, I am making a snazzy one!

From my point of view, aside from the bearing issue, a big problem you will have is the runnout.
I’m not sure how you plan exactly to connect the motor to the bit, but I think that in any case it will introduce runnout anf flex, because your motor shaft probably isn’t very thick.

Seemed like a good idea at first, but not sure it actually is. Save a few bucks and purchase a real router. If price is an issue you can consider to purchase a second hand one, most of the time they are fine (considering that most people are selling them because they had not much use for it), or a chinese el cheapo version.

If I had a dial guage, I would check the runout of the 5mm shaft on the motor right now. I know you can’t really tell by eye, but the runout feels pretty good to me. I was planning on using an er11 collet to 5mm shaft adapter which advertise very low runout. The ER collets have great runout as they re designed for this purpose. I am going to go with another motor type later in the future, the outrunners that I think Ryan was talking about. Due to more magnet poles, they have more torque and thus make more sense when it comes to cutting metals. They also usually have better and smoother speed control and less cogging at low RPM. The motor in the future I am using has an 8mm steel shafts which, in my opinion, would not cause any form of runout unless you’re just torturing the machine. It also helps that the shafts are quite rigid but brittle. The shaft failure Iv’e seen on RC cars are always rare and if they do happen, they tend to snap right off instead of bend or deform.

Maybe it will help in some way.

Hi, I have been using this kind of spindle for about a year now, and it works quite OK, although I just have about 40-50 hours on it as I do not have enough time for this great hobby at the moment.

See the attached pics how it is built.

I replaced the motor shaft with an ER11 shaft and added an aluminum block with two 608 bearings to help with the load on the tool and shaft.

I also added a “fan” on top to help with cooling. I have no idea what the temperature of a deWalt is but this keeps the inside of the motor at about 70-80 degrees Celsius. Did only up to 1h jobs with it but the temperature seems stable and does not rise after about 20 minutes into a job.

As for the power input, maximum I got so far was about 15A, so just under 400 W while milling aluminum.

The HobbyWing ESC though a little expensive does a great job at maintaining the set RPM under load, which was the main feature I bought it for.

It also has a serial line where you can connect an arduino for example and make a readout display with current RPM. I have it in work-in-progress stage, hopefully will finish it someday.

I do not have many videos but you can check some on my YouTube channel https://www.youtube.com/channel/UCpGtApXHTfLVt7Pwe-Mgn_Q.

Anyway the total cost was higher than a Kress 1050 (just the power supply cost me that much) not to mention the DeWalt so if you want to build it from scratch then I would recommend the professional tools. I am planning to go with the Kress sooner or later.

As I explained in some YouTube comment, I did it because of the fun of building things 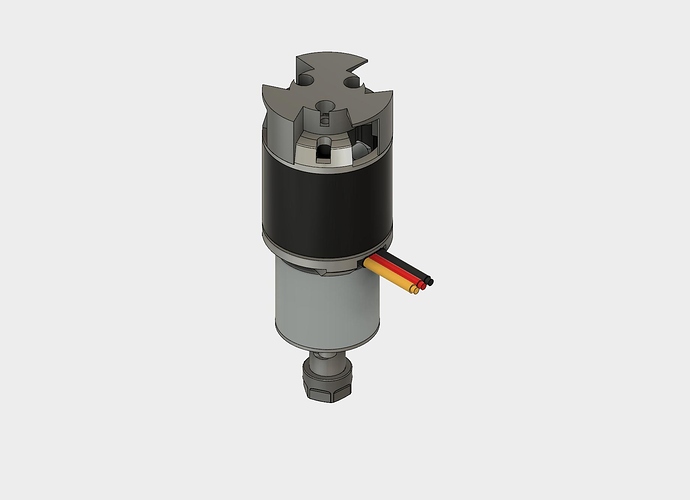 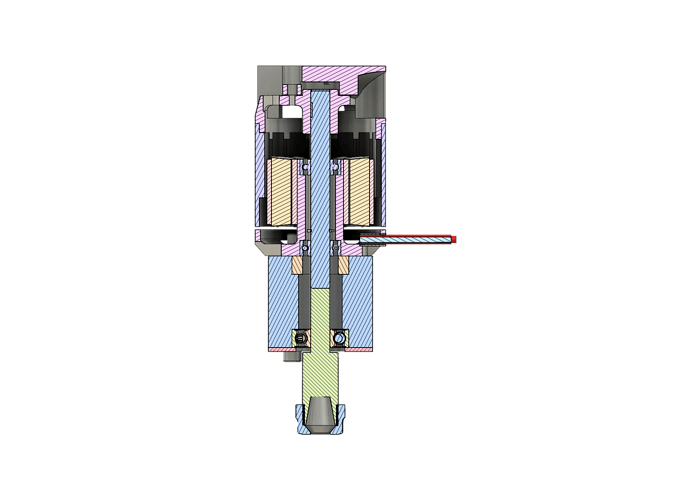