After spending a lot of time building, improving and using 3D printers, I finally wanted to get into the other end of manufacturing: subtractive manufacturing. So I needed a CNC Router and a printable one came in very handy. Although I did some modifications to the original version, the MPCNC itself is a beautiful and thoughtfully designed machine. Big thanks to Ryan for making this possible!

Here are some facts about my build:

I also made a small video about the things that you probably won’t find on a normal build. Maybe somebody can find some inspiration ;). https://youtu.be/IjwD5smOt38 The double belt setup is most likely the most exotic modification I did. Meanwhile I doubt that it is going to give any significant advantage over a single belt for my built. But it looks pretty nice :).

If you haven’t heard of using two belts before: The lower belt acts like a track, where the upper belt rides in. By using two idler bearings which press the upper belt into the lower belt, you can create two anchor points right next to the carriage instead of having the belt fixed at both ends of the machine. Therefore you effectively have a much shorter belt and hopefully less belt stretch aswell.

My spindle is going to arrive in the next days, can’t wait to finally make some chips ;). 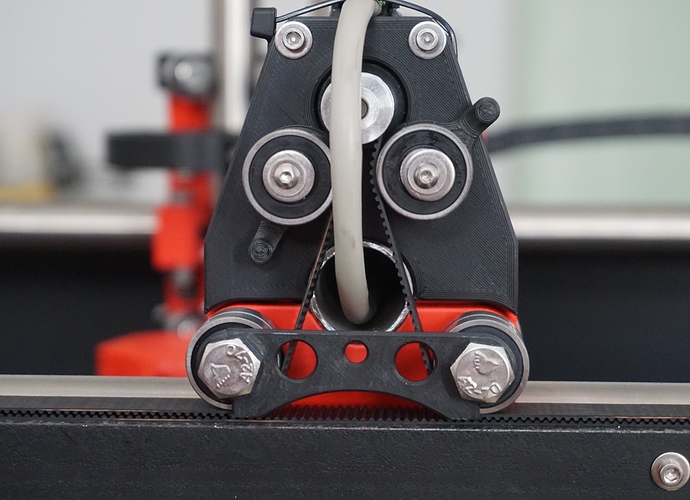 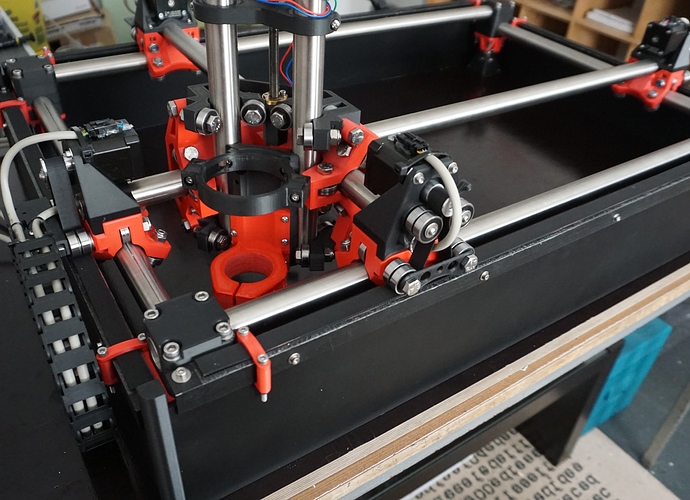 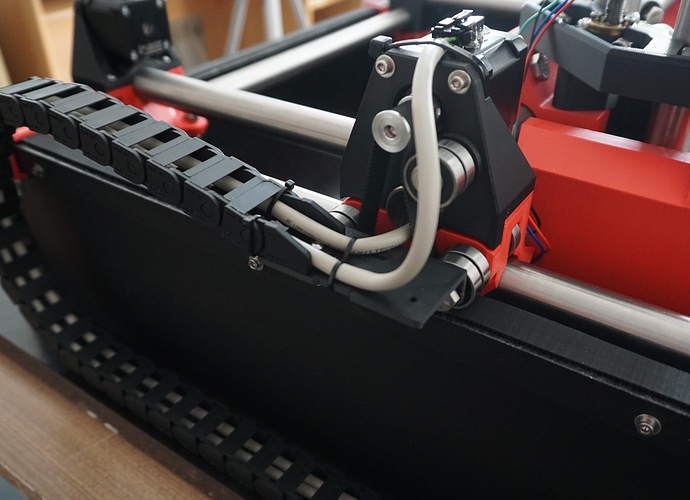 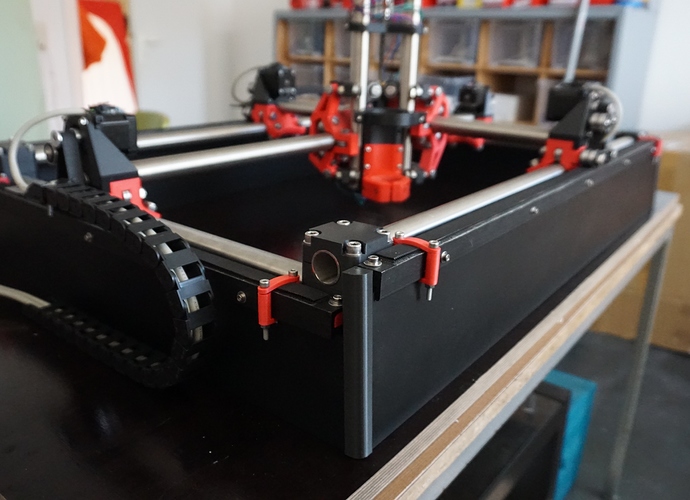 That is one clean build…spindle needs to hurry up to get that thing dirty!

Upper one is the AMB 1050 FME-P, the other one is the MM-1000 from Stepcraft (which is actually made by Mafell and is nearly identical with their FM-1000).
Both of these are great spindles and most likely will feel unchallenged by everything I do with them on the MPCNC. But the MPCNC probably won’t be my last CNC router and I wanted a spindle that I could carry to the next one. Oh, and let’s be honest: the color scheme of other spindles like the RT0700 just really wouldn’t fit in :D.

Two spindles, but only one is going to stay with me. I tested both of them and they are really similar: Nearly same size and power rating, both have features like double bearings in the front, soft-start, spindle lock…
The FME-P got a detachable cable and better soft start (not that important for using it in the MPCNC), but it does smell a lot more when running. The MM-1000 got a slightly bigger RPM range: 4000-25000 vs 5000-25000.
A big difference are the collet chucks: The FME-P uses ER16 precision collets with a dynamically balanced nut, the MM-1000 uses proprietary collets (although these are the same ones as the other AMB models like the FME-1 are using).

According to the inspection sheet, the FME-P should have a runout of 0,019mm at 25mm distance to the collet (measured at the factory). So maybe my test setup wasn’t that nice…

In the end I think I am going with the FME-P. The detachable cable makes it easy to install/ exchange for any other tool and the ER16 chuck gives me a lot more freedom and seems more futureproof for further CNC adventures.
As this is my first time working with this kind of stuff I would be very happy to hear your opinions. 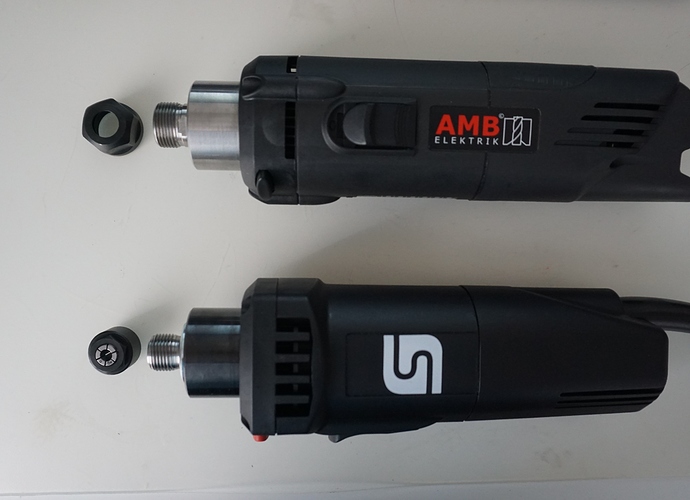 I am very jealous.

Hi Leon,
I think you did a great job with your setup. I found your video on YouTube when I considered building a CNC.
Now I just started building my MPCNC and would also like to use the double belt setup.
Since it seems to me, that you therefore redesigned a few parts, would you mind to post them, so I don’t have to do it myself

right now I am not 100% satisfied with the parts I designed. So I first want to make sure that they work as intended, then I am definitely going to publish them.

All right, thanks a lot.
If you need help in redesigning your parts, let me know. Even if I only have very little experience in 3D modeling and mechanics in general, I would help where I can.

I also just uploaded a new video, documenting some of my first cuts: https://youtu.be/pvdXkcIFtOY

I started out slow with foam board and made a lot of wood chips. Meanwhile I also tried some plastic and today I did my first cuts in aluminum. The MPCNC just cuts through everything without complaining (Although I am taking it relatively slow right now). I am going to post some results in the next days.

My parts for the double belt are now available on thingiverse: https://www.thingiverse.com/thing:3101774

Next the machine has to move to the garage where it gets an enclosure and a dust collection system. Those chips really fly everywhere!

@Brine Thanks. After partly redesigning some parts the whole setup works very well for me. One problem right now is that the 15mm belt takes a lot of force to be tensioned. That puts much stress on the motor bearings as well as on the printed part and it seems like it does flex a little bit. Maybe it would be better to use 6 or 9mm wide belts. 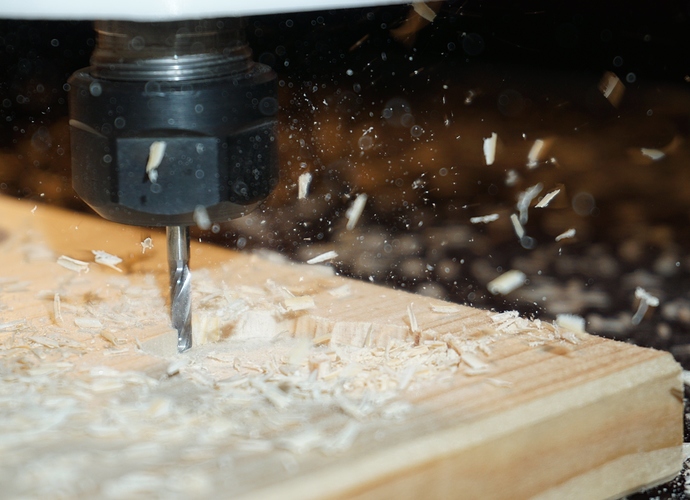 Thank you very much for sharing your redesigned parts. Can't wait to finish printing all the required parts and start building my own MPCNC. I will defenitely go for the double belt setup, even though I ordered a 6mm belt. I will share my experience with the 6mm belt, so we can find out if it puts less stress on the parts.

By the way, I realy like your videos, keep it up ;)

I concur, I hadn’t taken the time to check them out, but I’m now subscribed. I’m waiting for new videos

And great work on the double belt setup !

A small question : now, you also need to adjust the bottom belt support against the upper one. How do you do that ?

I have done some test pieces in aluminum to dial in feeds and speeds of my 1/8 single flute carbide endmill and to get some measurements on how accurate my machine is:

The quality of the top surface on the final pieces is way better than I expected, I can only feel a tiny burr with my fingernail. The dimensions on most parts are spot on, all within 0,05mm tolerance. Just two parts stand out, they are 19.85(20)mm and 39.65(40)mm in x-direction. I am going to investigate into that, but wanted to make something useful first:

The old PLA parts were bent and the new ones clamp the belt much better (I would definitely recommend that for anyone using the double belt). Next I wanted to make a keychain,but because of the small corners I had to switch to a 1mm end mill. I should have seen that one coming, but somehow I thought that going really slow would be a good idea… haven’t thought of chip welding…

Still I am very happy with my machine and the results I am getting. 0,05mm tolerance in aluminum with a 500$ CNC router… amazing!

@thesfreader Good question: It is very important that the two belts sit closely together. I 3d printed some rectangles with a hole and placed them between the angle iron and the mounting block on the corners. I printed them with different heights (0.1-1.0mm) and tried until I got a nice fit. But you could use basically anything (washer, aluminum foil, …) for that. 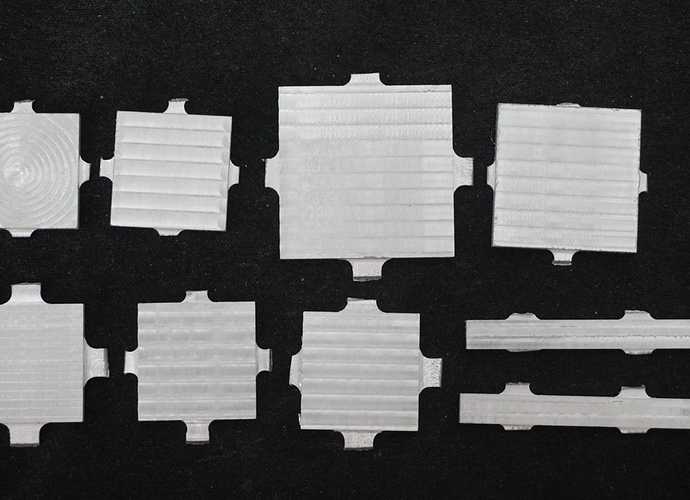 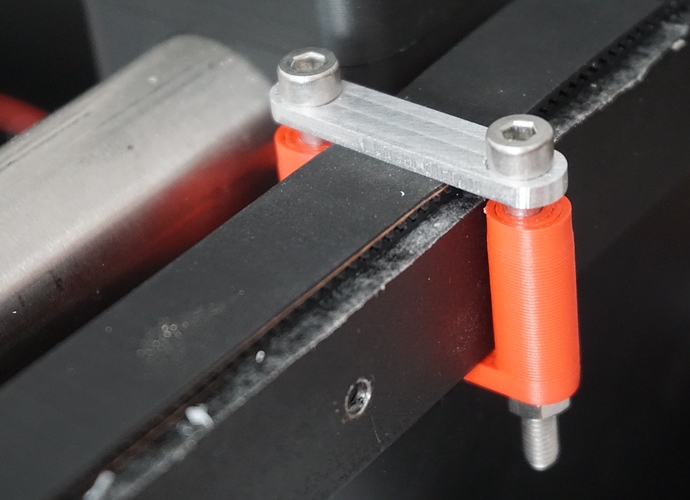 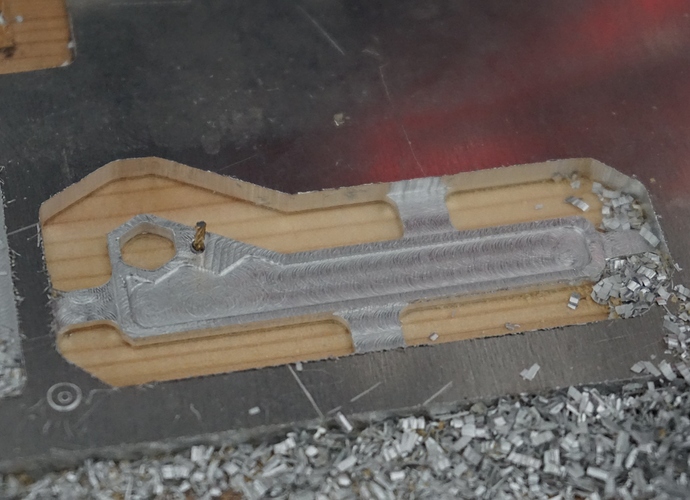 Great results. I would say if you can feel anything on the surface triple check if your spindle is perpendicular. Sometimes just a tiny shim will fix that.

After hours of testing and adding dozens of layers of aluminum foil I could still feel a tiny ridge on the surface. I used a 6mm two flute end mill with 5.8mm stepover and 0,1mm DOC:

I don’t know if I am reading this image correctly, but there is no sharp edge between the tool marks of the two toolpaths, instead they “flow” into each other. Therefore my spindle should be perfectly perpendicular and the ridge I can feel rather has to do with tool deflection, vibration or other nasty stuff.

.1mm DOC is probably too small. A bigger bite can help. It looks pretty dang good to me, you will always see tool marks,

It is definitely the best surface finish so far and if it becomes a consistent result I would be a happy man ;).

I noticed you used foam inside your tool mount in your video, perhaps there is enough play to allow such vibrations to show in your work. I would suggest adjusting your print so there is no gap and it holds the tool firmly. There is also a technique called tramming that might help determine if your spindle is slightly not perpendicular. But I would recommend the following in order:

Thanks for the advice Brian. The foam tape is only there to prevent scratches on the spindle housing from the hard plastic and is basically completely compressed after tightening the upper clamp, but I am going to check if it allows any wobble. Tramming the spindle seems like the way to go, but right now my spoilboard most likely isn’t flat. It is bigger than my work area so I can clamp down larger pieces, but I can’t surface it without leaving a ridge on all sides. I am definitely going to get me an additional spoilboard which fits into the work area. But before that I want the MPCNC to be in its final location, bolted onto a new table. Then it’s time for the fine tuning you suggested.

Today I also found a possible reason for the strange dimension variations in the test pieces: The motors lose steps. I saw it happen during a travel movement, so most likely the DRV8825 drivers are running to hot. Instead of adding additional cooling, I straightforwardly replaced them with TMC2208s. Ironically these need even more cooling, but the movement is much smoother, torque is higher, they are easily controllable through Marlin and nearly unhearable. Even the junior electrical assistant approved the new sound level:

Here is another boring square for you guys. But this one is roughly 50% less boring and three times heavier than the last ones – yep, I am talking about steel:

Again I am amazed of this little machine: Trochoidal milling with a two flute 4mm end mill, 2mm DOC, 0.6mm stepover, 20mm/s and 18000rpm with two finishing passes. I might be able to push it a little bit more, but before that I would like to fix two problems:

1)In the picture you can see that there are small notches to the right and left of the tabs. I suppose that these are caused by the end mill when it lifts up and down, so does anybody know of a setting in Fusion 360 to move the end mill away before lifting/ lowering it in 2D contour operations?

I am a little at a loss for the plunge as well. I am not sure if it is a pathing thing or maybe a different endmill. I tried a small ramp in and a straight plunge neither worked that well. I think a better plunge cutting endmill will help. I will add it to my list of things to work on. I do know even on big machines where possible they come in from outside the material and do not plunge unless absolutely necessary.

Freaking steel, I had no idea how wrong everyone was but steel is not actually all the difficult to do on the MPCNC once you have some basics under your belt. Congrats and welcome to a very small club of Steel Cutters!