I need to remember to take more pictures this year. I think I got like, 2 last year. Maybe.

Nope, looked back through my timeline, no pictures last year…

I was like a kid in a candy store last time. I will have more time and can hopefully absorb more info this time. Pictures would help, best notepad ever!

And less caffeine and sugar for me would help…dang Dr. Pepper gets me every time.

And less caffeine and sugar for me would help…dang Dr. Pepper gets me every time.

Please post pics for me, at least. I want to see Ryan’s booth, and a pic of Ryan amd Barry with thinkyhead, and a pic of the coolest improvement there. And I guess a pokemon.

Ha, luckily it isn’t that fancy. Most people are just sharing a table…e3d and a couple others had a banner.

I was trying to get something fancy together but I honestly will be lucky to get a build together to bring. Hahahah I thought I was going to have a redesign ready… haven’t even started.

Really hoping thinkyhead has some sort of talk. I would really love to hear his perspective and how he manages such a huge project. I think he is scheduled for ERRF to do a talk but that is even further from home for me.

Is this going to be the new standard for controllers?!

I’m sort of surprised no one has made a controller/LCD like this that just connects via USB. You wouldn’t need to edit the firmware, it would basically just be a touchscreen running a stripped down version of pronterface. Skip the wifi, skip the pi, skip the networking, skip the keyboard.

I’m in, how do we get started?

Either an arduino pro micro (based on the Leonardo, because it has two UARTs) or an esp32 (I like these a lot, and they are starting to be found very cheap).

An SPI SD card reader would be useful for gcode files too.

The gcode-feeder that Karl wrote, and I reviewed would be a decent starting place, but there’s a lot more to do, obviously.

Then we need to get some chinese company to copy it, and make it all in one PCB with cheap molded plastic, and sell them to us for cheap.

There is not enough time in the day.

But that screen looks really easy to use for brute force arduino “programmer” like myself. Karl actually just linked that project in the FB group. Put the two together and it could be awesome.

PID first…if that other controller isn’t as good as I hope…this could be the next project for sure. I would also be happy with just having a few extra (6) buttons on the current displays for movement only, even if you had to be on a specific screen for them to function.

A touch screen interface would be amazing. I don’t care to use thd LCD currently on the machine. Its too clunky to move the machine around for me. I much more prefer the PC. A touch screen would make it much faster and easier to setup I think. Connected USB with a longer cable and/or Wifi to make it hand held with a cradle. Would be pretty cool!

Wireless would be cool too (sounds like feature creep

). You use some 2.4GHz radios to make the UART connection wireless. WiFi seems like we already know how to do that with a raspberry pi. The esp32 does do wifi (and some bluetooth), but it’s a good processor on it’s own. Wireless always will have the problem of power, and then you’re talking batteries, and a charger, and it’s getting more complicated (and sometimes dangerous).

The USB might actually be a lot harder than just UART. Connecting to the RAMPS/Rambo’s tx/rx pins would be simple, although I’m not 100% sure what would happen if you also had it connected to a computer, like the pi at the same time. Probably bad stuff, at the very least, one of them wouldn’t work. It would be worth trying USB, I know there are some good libraries for it, but you’d end up having to support a lot more USB than you really want to just to get the serial port. Working with an octopi or cnc.js would be pretty important to think about, even if the answer is a USB cord swap.

There was a post on here about someone wanting to get some jog gcodes into Marlin, which would be very helpful for something like this.

Other than that, I think this would be very controller agnostic. It would be nice if version 2.1.3 of Marlin wouldn’t have to consider this screen controller’s software at all, it would just work as well as 2.1.2. The rep rap screen is very tightly coupled with the Marlin software, so you couldn’t change the layout without changing Marlin, and you can’t get new Marlin features without also getting the latest screen stuff from Marlin. Having them be separate would be nice (and in some cases, a headache).

I agree with Ryan though, I don’t have enough hours in the day. I just wish it was already invented, and it was open source, and it was cheap, and I already had two.

There is a board out there for CNC that connects to a Raspberry pi. I wonder if that would be the best solution for that?

Hey Ryan, Ron here. I took my mpcnc last year and we talks a lot. It was a great time!

I had the same dilemma last year when considering that to bring. A loud router is too much for that crowded room!

The pen idea worked really well. People could see concrete results and could see the machine in operation.

I am looking forward to seeing your 19" machine!

Hey Ryan, Ron here. I took my mpcnc last year and we talks a lot. It was a great time!

Yeah buddy! I finally put the picture in a place I wouldn’t lose it!

I am looking forward to seeing your 19″ machine!

I just started putting it together, even sanded the rails…fancy as it gets! And the new feet…I have never had such an easy time squaring it up, and it is solid.

Can’t wait to see you again, and everyone. Lets gets some pictures and put faces to names please.

Still not sure what to draw, a few crowns, some logo’s…something that looks really technical. I have no idea, get the machine there and something will work out. I have some stickers coming. Need to get some sort of banner or table runner, flyer with some specs and a price? I have no idea, where is my marketing department when I need them??

Still not sure what to draw, a few crowns, some logo’s…something that looks really technical

What about the back of this shirt?

Maybe, the original art isn’t any sort of vector though. It is just a .png. I wonder if I can export an iso view dxf from solidworks? That would be insanely awesome. Dam Heffe, always coming in with the ideas…

Awesome! Now you have to do one for the other machines.

And then you can do one with the parts in slightly different places, trace those out, and make a flip book!

They might not all be winning ideas… I’m a monkey on a typewriter, really. 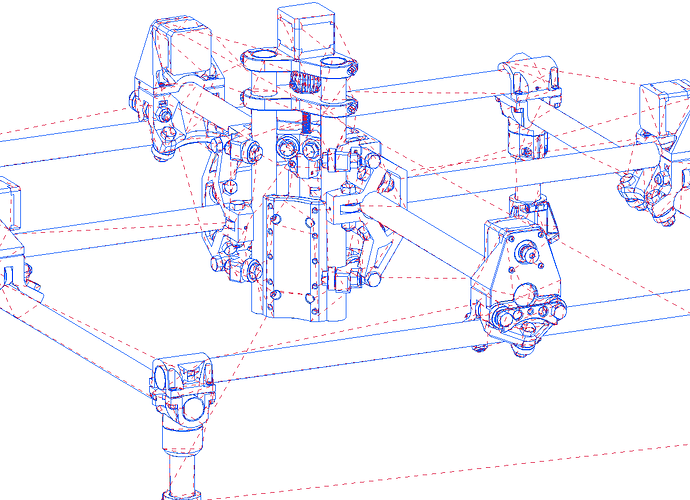