My first LR3 build is complete!

It’s been a pretty fun project. I think the most frustrating part was removing the linear rails multiple times because I kept forgetting to install the 3 bolts first, but other than that, it’s really been a pretty straightforward process.

A couple things I’m pointing out here for other newbies to this. 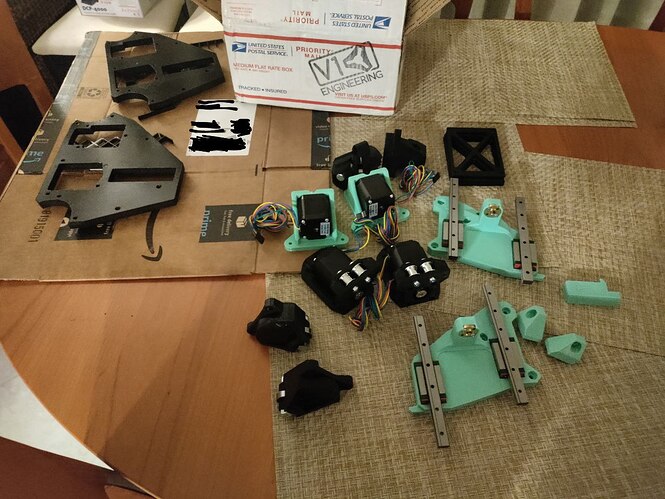 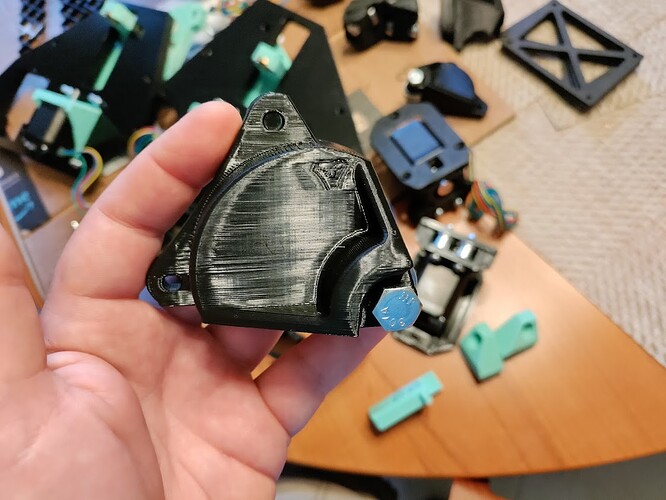 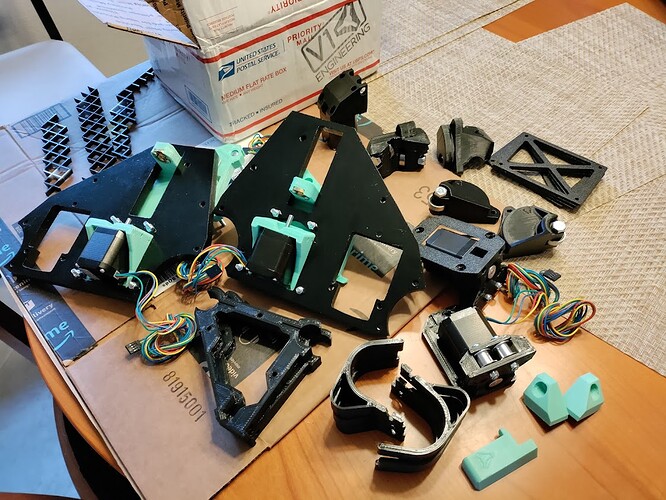 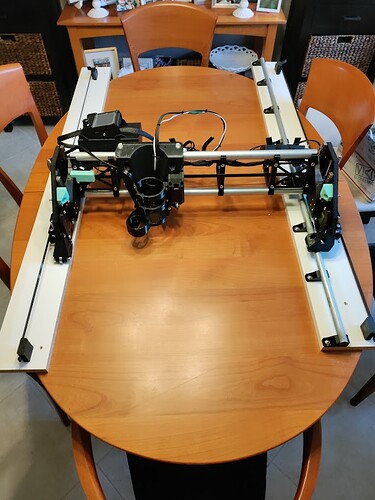 4634×844 102 KB
Almost ready to test print, but need to square the frame since it’s too hot to mount to the tablesaw table outside 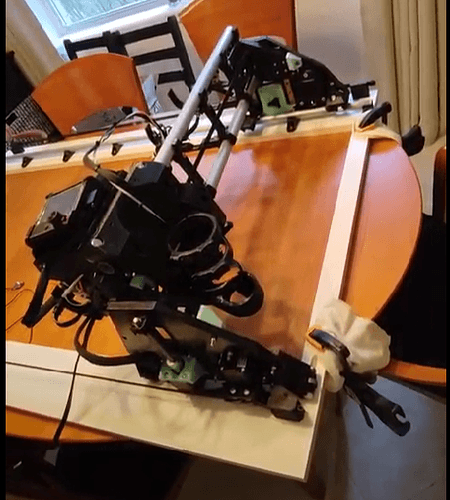 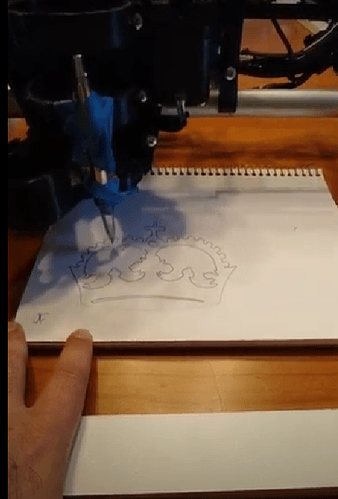 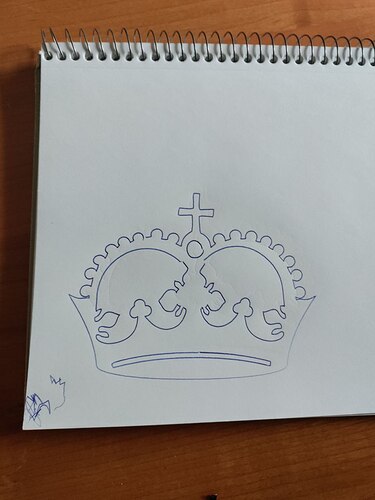 crown-2961×1280 100 KB
Crown came out good considering my poor attachment of the pen. I did another time with pen zip tied tight in the vacuum area of the mount instead and the crown came out perfect. 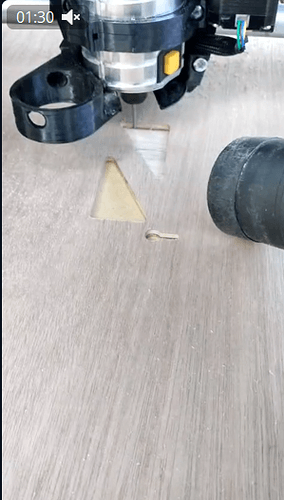 first-cut300×527 192 KB
I learned a lot on the first cut. I used 3/16" luan board for the struts since hardboard was out of stock locally. At first I did 3 passes (2mm per pass) and cut too much (total of 6 mm and only 2mm of tabs. just barely over 4 I was already through the board so there were no tabs. I rectified this while it was cutting by popping in a couple finish nails to hold it in place. this was easy since I cut all the interior pockets first and could easily see where I could pop a nail in without it getting in the way of anything. for the 2nd and 3rd, I updated the job to do 2 passes of 2.5mm depth per pass and holding tabs 2.5mm high and that came out perfect. Used all default speeds, cut time for parts 2&3 came out to about 35mins ea. Also check your clearance settings in ESTLCAM. I only had 2mm clearance and my spoil board was a hair prouder on the far Y, so there were 2 little scrape drags at the end of my first cut. I wasn’t going to try and surface my whole spoilboard just for that so I just raised my clearance to 3mm and that was enough to stay clear of the workpiece in the final areas. I’ll make sure to surface my spoilboard flat so it’ll be perfectly parallel to my gantry now that I’m fully built, but for someone new to CNC this is something that i just didn’t quite understand until I started cutting. 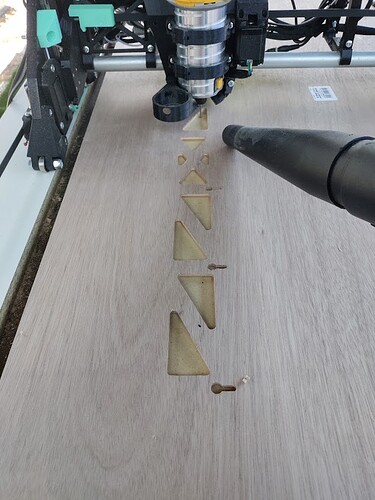 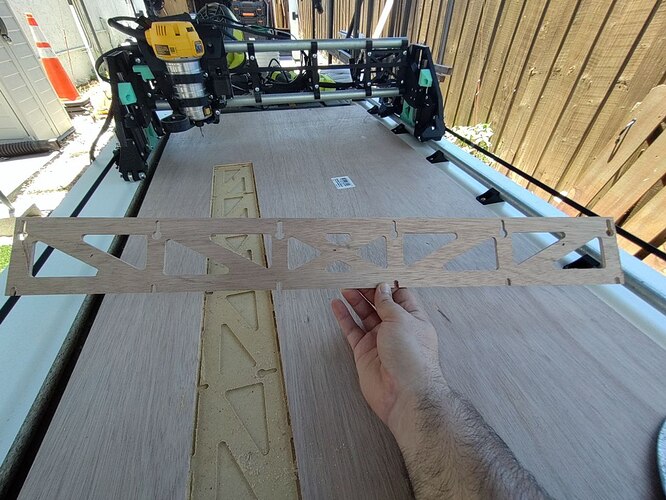 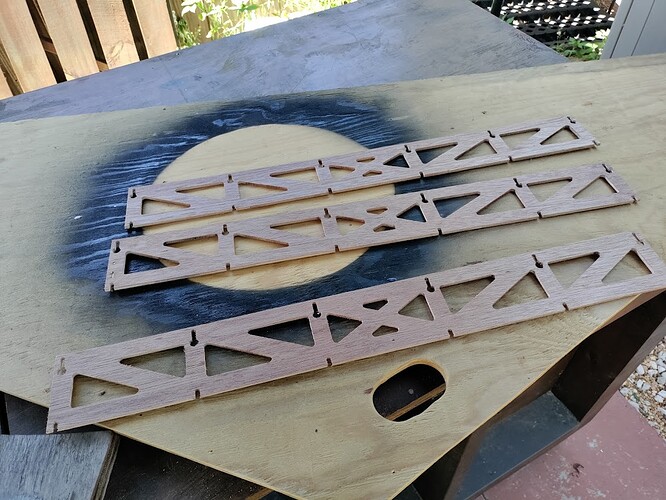 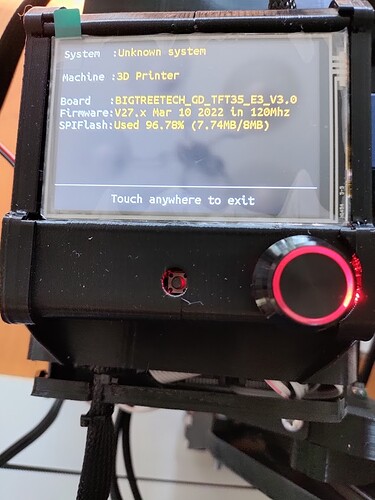 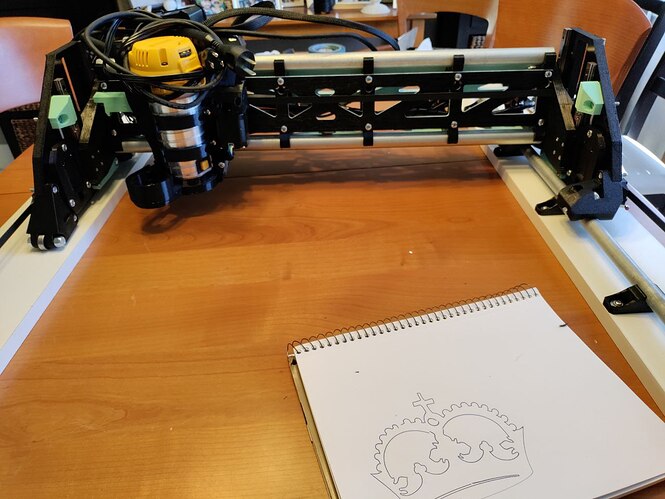 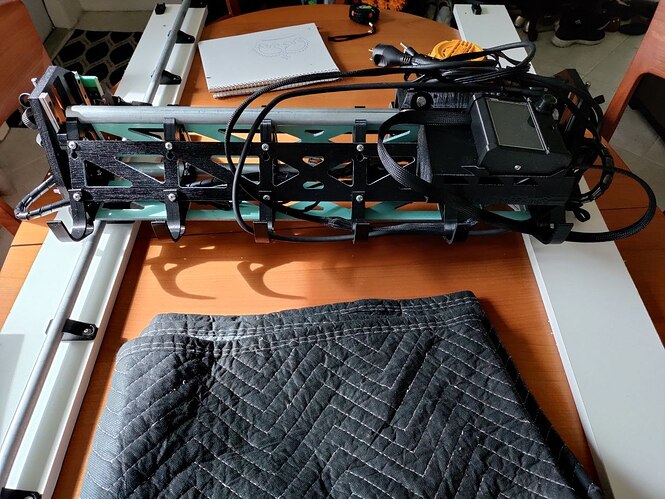 finished21280×961 274 KB
All reassembled, finalized wiring and tested motors and end stop homing. All finished, just waiting on my vacuum tube to come in so I can permanently attach a small tube like in the original photos to quick connect to the shop vac.
11 Likes
vicious1 (Ryan) July 5, 2022, 10:14pm #2

Thanks for the tips, I think those could really help some people.

Congratulations @rchamp26! Appreciate hearing about, and learning from your own journey, in this and your other posts/topics. Neat idea to mount Y rail/belts on melamine lengths. Was thinking about using primed finger joint jamb/trim lengths (3/4" x 5-1/2" ?). Cheers!

Thanks! Yeah I have a small work area (8x16 paulk style trailer for my “shop” and most everything i do is under the 10x20’ carport tent where my tablesaw table is). Being able to easily mount and unmount is huge for me. It only take about 10mins to setup and less than 10 to breakdown. best of all i was able to use scrap i had from a previous project of custom soft close under cabinet drawers for my parents kitchen. What i will probably do to give me a nice square lineup is put a fatter melamine board in the front by the y home so i can easily align my spoilboard and stock for cuts when necessary. When i get around to it, will put in some nicer threaded inserts so the screw holes don’t wear out and knock things out of square, but i’ve got some time before that is a risk.

and yeah i cut my board to 5" wide. the y rail side needs that but the other side can be slightly thinner

Thanks for the post. Great work! Like the idea for the Y Rails. I am about to build my table, and was wondering if the spoil board was separate to where the Y Rails are connected, as they seem to be one and the same on other builds I have seen.

In similar situation, looking for whatever’s fastest to assemble, and disassemble for storing. Here’s another example of rails separate from spoilboard @ Minimal Table Designs/Pics that would make MacGyver proud - #2 by Dna

I would like a “set and forget” way of clamping/securing the melamine rail plates to the table but haven’t thought of anything more elegant than my current way (measured exactly where to place them on my table, clamped and drilled the holes through the board into the table and drove screws in. now i just preset my screws to protrude the rail plate a hair and align with holes in table and screw). It works well and doesn’t take much time, but would like something easier and less to think about being aligned right.

I was thinking of doing something like using a t-track in the table and some type of bolt with big nut, but just seems to use added cost and complexity. and potential interference with the belts/machine unless you waste space in Y to add room for it.

Now that i think about it more, one way that might be great longer term is to just make some 3/4" bench dog holes in the table and make some pegs in the bottom of the yrail plates that it just snugly fits into.

I’m really digging the melamine. It was super cheap considering material costs right now ( a 49"x97"x3/4" sheet at the big box here for $39.00), allows for the wheels to glide super smooth, is dimensionally accurate (as long as proper care is taken moisture wise), and doesn’t have any cups/dips in it. If and when it gets damaged from me banging it around moving it, I can easily cut new ones cheaply enough. Too bad I can’t get premade sheets in other colors nearby.

I just realized I didn’t answer regarding spoilboard. It was completely separately attached to the table. Just screwed into the table since it’s a “shop” table, but you could be fancy by drilling holes and putting in Threaded inserts to mount the spoilboard.

I’ll probably eventually build out the table more with t track and strips of mdf like most folk do. Seems to be the most practical long term if used a lot