First of all, I want to make it clear that guide rails like these are not mandatory, the machine works perfectly well as designed by Ryan. I had issues with my machine tracking so originally I just added some guide rails to the table and that fixed all my problems.

I went with rails due to the following. I wanted a dust boot that snapped under the 611 plate without losing depth of cut —> I bought a new clamp mount that held the router lower —> Now I could install a dust boot under the plate ----> Now i’m cutting pretty high on my z axis (using a 3/4 spoil board) so I wanted to raise my wheel level, also the dust boot was only working OK but I still had to constantly keep dust away from the wheel travel to avoid marks when surfacing —> This is when I switched to rails as they would not be effected be dust, my ride height was higher so I could run my gantry very close to bottom Z.

I got rails that were too long for the table, I over hung them on one side so I could do easy tool changes and dove tail joints on vertical boards. I have so far regretted this decision because during the first bit change my 60 degree V bit dropped out of the router right down onto the concrete floor. DAMN.

Installing the rails was easy, I just bolted down one side, cut a piece of wood to the exact spacing I wanted and then pulled the other rail against it as I secured it to the table. This way I did not have to measure and the rails are exactly parallel. My angle brackets were actually cut from C-channel (from our scrap bin at work) hopefully when I get into cutting aluminum I can cut new ones because these are pretty rough. My belt tensioner bracket was also re-used which I will need to upgrade. Ideally I would have put a bigger table top on and cut a big “U” out of one side but wanted to see how the rails worked first without spending money on a 1" MDF top.

After squaring everything up (I will skip this detail unless someone is curious) I trammed the lowrider and checked for square. on a 600mm x 800mm triangle the diagonal is bang on 1000mm. I was always about half a mm off on a 300x400 triangle when I had my old rails and wheels (I see this as a significant improvement) best thing is, I don’t have to square up the machine, it just stays square and I can pull it by hand into place, fire it up and its good to go.

Cut some stop blocks that snap onto the rails and are just friction fit but very tight. These will be used as stops when I start a complicated project so I have a reference point in the event the machine crashed. These were cut with 1/4 upcut bit at 8mm DOC and 20mm/sec. Lots of chips but the ID was bang on with a 0.3mm cleanup pass. 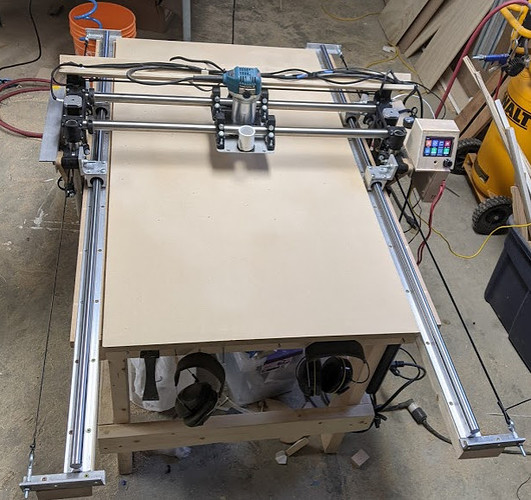 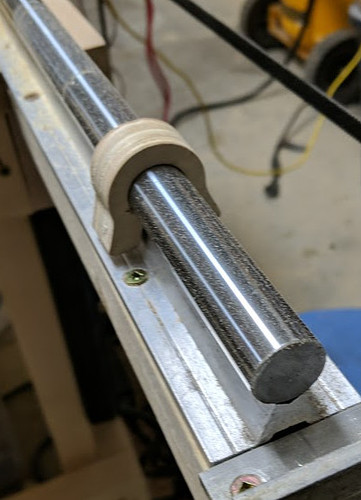 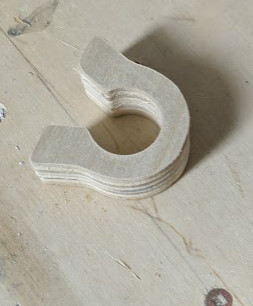 After all the messing around I had to knock out a quick project to keep the wife happy (and the kiddo). 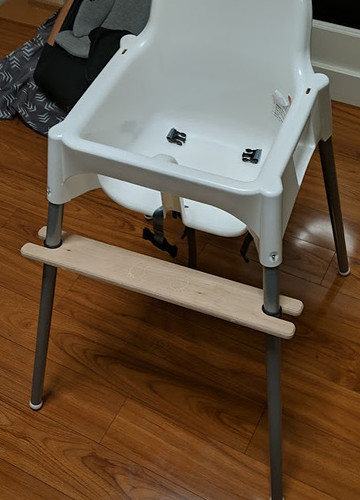 All in all I am happy with the results, the next step would be aluminum XY corner pieces that another forum member had designed… Why?.. because I can!

What size rails did you go with and where did you source them? I have been kicking this idea around in my head for a while as well.

I went with the SBR20 rails (20mm), I was looking at the 16mm for a while but figured if I was going to overhang the table I might as well get the biggest ones I could. I sourced them from Amazon.com, however since I am in Canada I had to ship them to a bonded warehouse and then did my own customs clearance to save some money.

That looks really nice. Looks like 6’ rails are about $130. I’m assuming it gains some stiffness from the rails also.

Yes, the main improvement noticed is when manually sliding the gantry. I can pull it from one side with very little flex. It does move a tiny bit. Maybe 1/16 but then a quick forward/backward shuffle holding the middle and it straightens out.

The profiled rails are probably a bit better in holding everything together but these rails have much less flex and still allows the machine to roll off the side of the table. When one side of the z drops you will notice the z tubes rotate inboard under the table. Profiled rails would prevent this and might cause the machine to bind. Allowing some rotation over the rails is important unless you can drill your angle brackets exactly the same side to side

Well, I couldn’t stand the unsightly tensioner brackets that were cobbled together so I made some new ones. I am loving this 1/4" bit, the extra rigidity over a 1/8 bit when cutting 3/4" plywood is awesome. 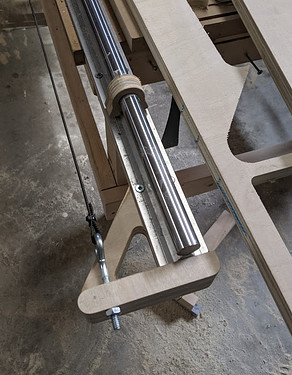 Then glued up some plywood to make some heavy and wide parallel blocks to start the machine on. I really need to upgrade to dual end stops but this works for now. 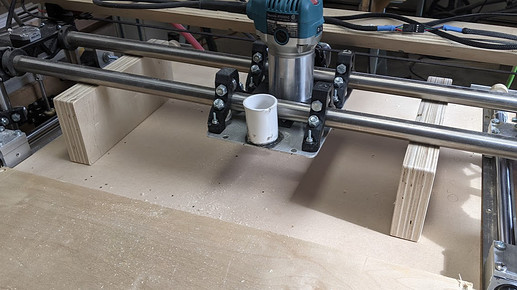 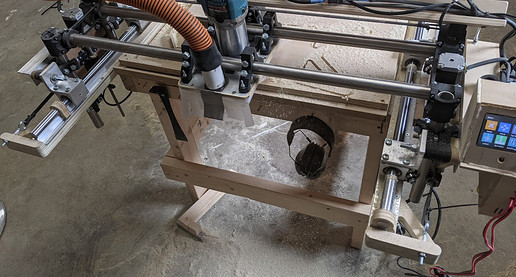 Somehow during my tool change the touch pad did not register causing my V bit to go through my touch pad. I was able to restart the machine using only the one stop block on the rail because the rails hold the machine square. The missing operation was chamfering the perimeter of everything (my new favorite thing to do), as you can see its pretty damn consistent meaning that my machine stayed true throughout the whole operation. 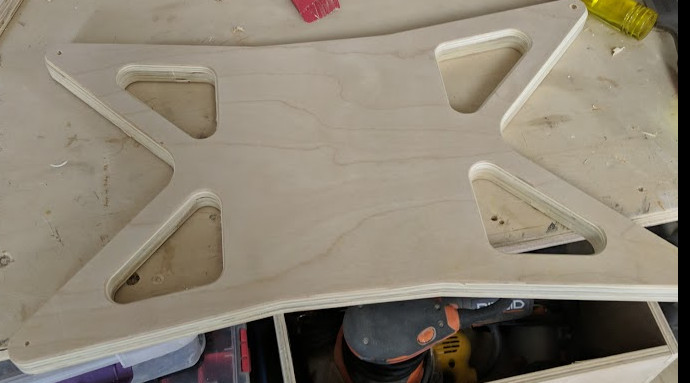 Nice job. I’m considering to do something similar. So far, I just clamped some ‘guide-rails’ to keep the LR on track, and that was also sufficient for the few things I did with it.
In the far distance, I might even consider to fit a CO²-laser tube onto the LR, then you need definitely an accurate Y-axis, for not loosing the beam.
May I ask how long the linear rails are on your build, as far I saw, 1500mm is the maximum you can order on Amazon or AliExpress, my build is about 2700mm travel on Y-axis, the steel rails might be somewhere around 3000mm. However, most things I did was within the first lower half, so 1500mm or even 1200mm could be enough. while using that steel frame, I recon that even the 16mm rail system be sufficient, depends what is easy available.

To be honest I didn’t see a significant accuracy improvement, I did it more to prevent dust building in front of the wheels and to raise my gantry. And because I could.

I think I got 12000mm as that is all I could find on Amazon for a reasonable price. You can connect multiples together. The rail unbolts for the “V” shaped base, you could then shift everything by two holes so that the additional rail is staggered on the joint if that makes sense.

I had some Aluminium rails, to keep the LR on track, it prevented a bit the dust on the rail as well. However there was some friction with the wheels.
Then I came up with the idea of V-Slot wheels, but I didn’t test it up to today.
I doubt a bit that those printed wheels are really round, so I like the approach with the linear rails much better, eventually they could even be used for the X-axis. ;D 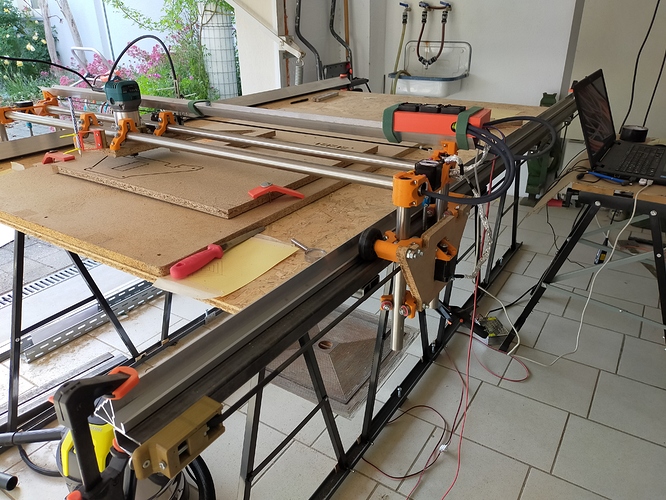 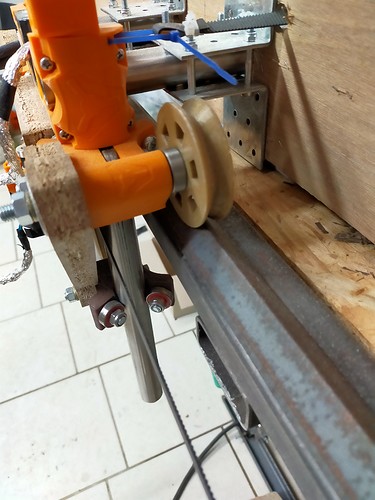 Nice solution! I would not use the linear rails for the x axis. They are solid stainless steel and very heavy. You would have to have a fixed gantry if you went that route