My own take on the spirit of the MPCNC

Reworking the mount for a Bosch 1617EVS. Minor deflection while using a 3/8" ball nose bit / 10mm DOC / 2000mm/min. The deflection seemed to be at the linear rail block. I was a bit surprised, but then again I purchased inexpensive rails. Extending the mount height to add two more blocks (4 in total). Maybe that will reduce the deflection. Otherwise I need to look into better linear rails.

You may want to print off that brace I posted earlier too. That is a lot more router and end mill than I originally intended (ball mills tend to have higher cutting forces), curious to hear more about how it is doing with that unit on it.

I was building the gantry right when you posted the brace. It was an easy addition.

The test cuts I just performed all went quite well. Very few quirks to work through. I might add an additional tube (form a triangle) across the back and somehow make that function as the cable chain guide too. Not a design guru, but I do have fun tinkering in CAD.

I’ll post a video when I get the vacuum mount situated and functional.

That is a monster size! Bigger than the bench I have my mill and lathe attached on

Tinker away! Might help someone else that decides on a machine that size!

That’s how I was taught to terminate them as an apprentice (working on baggage handling systems) We would only terminate at the VFD/Control side, and to leave the shield unterminated at the motor end.

From what I’ve read online, people seem to be saying to earth the VFD shield at both ends. Which throws me a little.

On the spindle end it gets a little foggy…3 phase pins and 1 earth pin. Except the earth pin isn’t physically connected to the metal of the spindle.

Time will tell, I may end up joining the shield and earthing conductor at the spindle side, as I’m hoping to use the spindle as a GND reference for my touch plate. I’m thinking I may get some mis-triggers if the VFD is introducing interference - Then again, the spindle won’t be spinning when using the touch plate so maybe it will be fine.

Still making tweaks. But, for the most part it will be nuance from here. 6000 mm/min is as fast as the board will let the CNC go without pausing. There is a bit of chatter at the entry/exit point to work out (amongst other things too).

The two M3x6 that go in to the z stepper mount are changed to M3x10, I definitely forgot to note that earlier.

Hi guys, long time lurker first time poster I think. I’ve been running a LR2 for many years and have to take my hat off to V1 for an amazing design and just a great bit of machinery. I’m currently upgrading to the LR3 but have become side-tracked with Brutus. I know this is not a trouble shooting forum for Brutus but I was hoping Alex might be able to clarify a simple one for me.

I’ve printed the left and right gantries as well as the top and bottom caps in metric - the caps don’t appear to have the same radius as the gantries - is this by design? I can’t comprehend how it will be able to secure the horizontal rails - or have I somehow printed the imperial caps with the metric gantries or vice versa?

Sorry for the lengthy first post - honorable mention to Jeffeb3 who without knowing it, has trouble shot so many problems for me over the years.

The hero without a cape!

They should be identical, might not look like it since the cap is supposed to have a gap under it to the gantry side. There is only a .2mm difference in radius between the metric and standard versions. 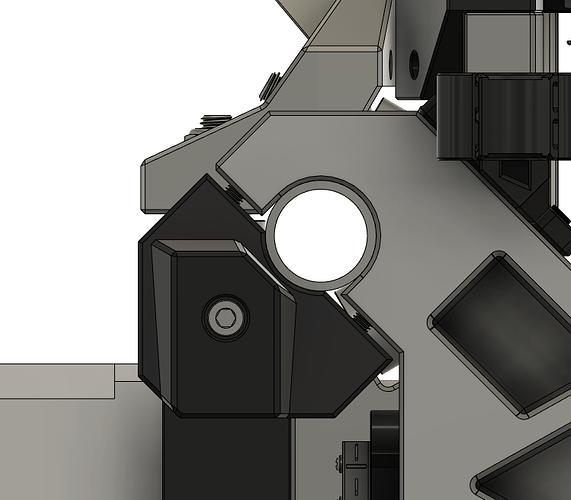 You absolute legend - makes perfect sense seeing it in situ.

Thanks @Brute71 I’ll keep you updated on the build.