New build in the Netherlands

I too have decided to make the step to build a MPCNC. I’ve ordered all the parts I need (mostly import) and have been printing parts for the last few days. So far everything is looking great, my compliments for making such a great design.

I often print functional parts rather than decorative parts, so I run a bigger nozzle (0.8 mm) on my Ender 3. I’m printing at a layer height of 0.4 mm and while I could go with larger layers, I feel this is the best trade-off between detail and printing time. So far I’ve been cutting printing times in half compared to the example times with very conservative settings (I want these parts to be pristine). I believe parts will also be stronger, mainly perpendicular to the layers, since there the layers are fused over a larger area.

Anyway, I’ll post pictures as soon as I have something worthwhile to show.

You’re absolutely right! Thanks again for the great design Ryan.

I’m not entirely sure what size I’ll be building this, so I haven’t bought the steel pipes yet. I’ll be going for 25 mm OD, since the other sizes aren’t available here. I have the choice between welded pipes made from regular steel or cold-rolled stainless steel pipes. The welded steel pipes have a seam and seem to be less smooth judging by the pictures, so I guess I’ll go for stainless.

Alright, bit of a hiatus because I was moving to new house. But I’m printing the last big parts today and I only have some spacers and things to print, so should be finished printing tommorow.

I’m going to repurpose an old desk to use as a table. As long as the top is reasonably flat and sturdy, all should be well, right?

I’ll need to design an enclosing for the power supply and the controller board. I’ll be sure to take some pictures of the final result.

Alright so this took a while, funny how life can get in the way of a cool project. I’ve experimented with some drawings and some light cutting in pine plates, fun stuff! 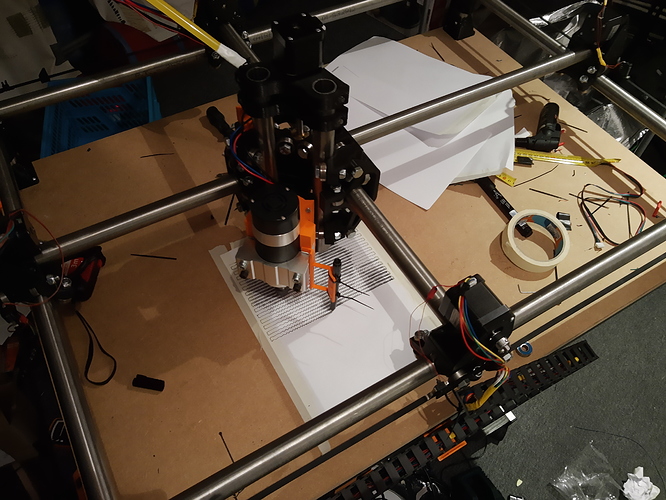 The only problem I’m encountering is the dual endstop homing sequence does not work correctly. The x-axis works fine, but if I try to home the y-axis the y2-stepper blows right through the endstop. All endstops are wired correctly (verified with M119). I think my y2 endstop is slightly ahead of the y1 endstop, could that cause problems? Does it check y1 before y2?

For now I’m having loads of fun without the dual endstops and luckily I’ve not done any damage yet. But any tips are welcome.

Thanks for a great design Ryan!

The solution is probably beyond me, but as far as the endstops block position I don’t think that is the cause. From what I have gathered depending on your build. Having them slightly off could help correct your squaring.

Yeah, that’s what I thought as well. Would be weird if you couldn’t place the second end stop in front of the first.

I hope someone knows the answer.

Have you verified the y2_min endstop is on the side of the y2 motor? If the motor wires were switched, it sould stop the close motor when the far endstop was triggered. Then the far motor would just plow through.

That’s it! I checked the end stops were wired correctly, but apparently I had swapped the y1 and y2 motors during installation. Thanks a bunch Jeff!

Alright, I decided to upgrade my Burly MPCNC to Primo! Just ordered the conversion kit, even with shipping that’s a pretty good deal for having all the right bits and bobs.

The reason I’m upgrading is because my CNC is great, but I feel it’s not working to the best of its ability yet. For one, I’m using a Chinesium 500W brushless spindle and the mount I designed sticks out a lot to give enough clearance for the spindle. The picture above is an older design, the newer mount brings the spindle somewhat closer and is filled with epoxy foam for extra rigidity and temperature stability, but I’d still like it closer to the rails for even more rigidity.

Another issue is that the tension on my belts seems to have decreased in the few months I didn’t use it, which caused some skipped teeth in my most recent project. Probably due to my cheap cable ties and cheap belts. I really like the new tensioning system and bigger belts on Primo.

So yeah, I’m excited! I’m dreading the wiring though, since I kind of made a mess of it the first time around. Might be worth redoing.

Do you suppose I could keep the bases of the old Burly?