I kinda always wanted a CNC Router/Milling machine - I like making stuff and a CNC gives you the possibility to make stuff, you cant make by hand (that easy, accurate, fast anyways). I got into 3d printing some years ago with an Anet A8, built it, modified it, had fun with it - but there was a flaw, even tough you can do a lot with 3d printing, its still only a plastic part - no real eye candy, no real engineering material.

I’m always watching other people make stuff on YouTube, partly plain entertainment, partly to gather new ideas and inspirations for my own little projects - one day, 2 months ago, i’ve seen somebody working with a CNC router, it was the MPCNC, but i didnt know that yet, i thought it was just another one off that, in the end, is more expensive than something like an xcarve but still less capable. I got interessted, looked it up, came here, read a lot about what you can do with it and finally settled in and decided to build it.

With the spark in my mind, the first thing i considered was my 3d printer - in the end, it was just the cheapest i could find, decently modified yet not the most reliable or accurate machine in the world. Long story short, I am now a proud Ender 3 owner, still cheap, still not the best, but its MILES (wow, just realized, we say “Meilenweit” even in Germany, imperial units OP confirmed) away from the trusty old Anet. Planning further, i decided to gut the Anet printer for its motors and some of the electricals - one thing i dont have to buy now. I got on sourcing parts, supplys needed and so on, sliced all the parts to the specs given in the instructions, printed out the parts list so i could check off the parts already done (highly recommended to new builders that dont know the parts in and out yet) and got printing.

So the first prints were in the making. The manual tells you, its about 115Hrs, but in reality, for most people it will be more. I did not track how long it took, but it was more in the realm of ~150 hours in the end. My strategy was to print out the big parts first, and then do the smaller ones - use your patience when you got it! The prints went smooth, i only printed during the day and carefully monitored it. It pretty much went flawless, like 2 times the nozzle was clogged but that was no big deal because the new Ender can pause a print with no issues at all - success! The parts came out very nice in my book, sure, there are better set up printers than mine, but aside from one or two test prints, i didnt do anything to it. One thing i can recommend to do is to order a large spool of filament, 5KG PLA of your favourite color is not that big of an investment, it doesnt turn bad (does it?) and you dont have to take care of the order in wich you print in order to get the most out of your filament spool. you cant print a 200gr part with 2 spools that have 100 gr each on it. lesson learned, i ended up using 3 1kg spools and some of my parts are blue instead of the black i initially wanted. doesnt look too bad in the end.

Done printing, i went ahead and began assembling the components, there are TONS of screws and bearings, its easy to lose sight yet if you understand how the machine works, its pretty straight forward. this step requires a lot of elbow grease and patience. i spent maybe 10 hours, making sure everything was as perfect as i could get it. A quick testfit confirmed, everything was going well! Going forward, more assembly, i ran into a big one. my bolts were wrong. yes, i managed to fuck up by once not wanting to cheap out - i bought internal 6 hardware to make assembly smoother and the thing just look better, but its clearly designed to work with hex heads since those are a lower profile. using these screws requires some of them to be shortened down a bit. again, not the end of the world, since i own a mini lathe - again some elbow grease needed, but thats exactly the job, minilathes exist for. The remaining things all looked very promising - its all snug, no play, but runs smoothly, i’m happy.

I just finished assembling it for the (hopefully) last time, next step: Wiring. If i get it managed, there will be coming more chapters of the story - for the time beeing, here are some pictures of the machine so far (excuse the lighting, its really bad, thats not where the MPCNC is going to live in the end)!

Edit: Forgot to mention its size! its 660x660 squared, since i want to be able to machine some aluminium and i also want to give pcb routing a go, even tough i already planned making a dedicated pcb routing machine with the help of the mpcnc! 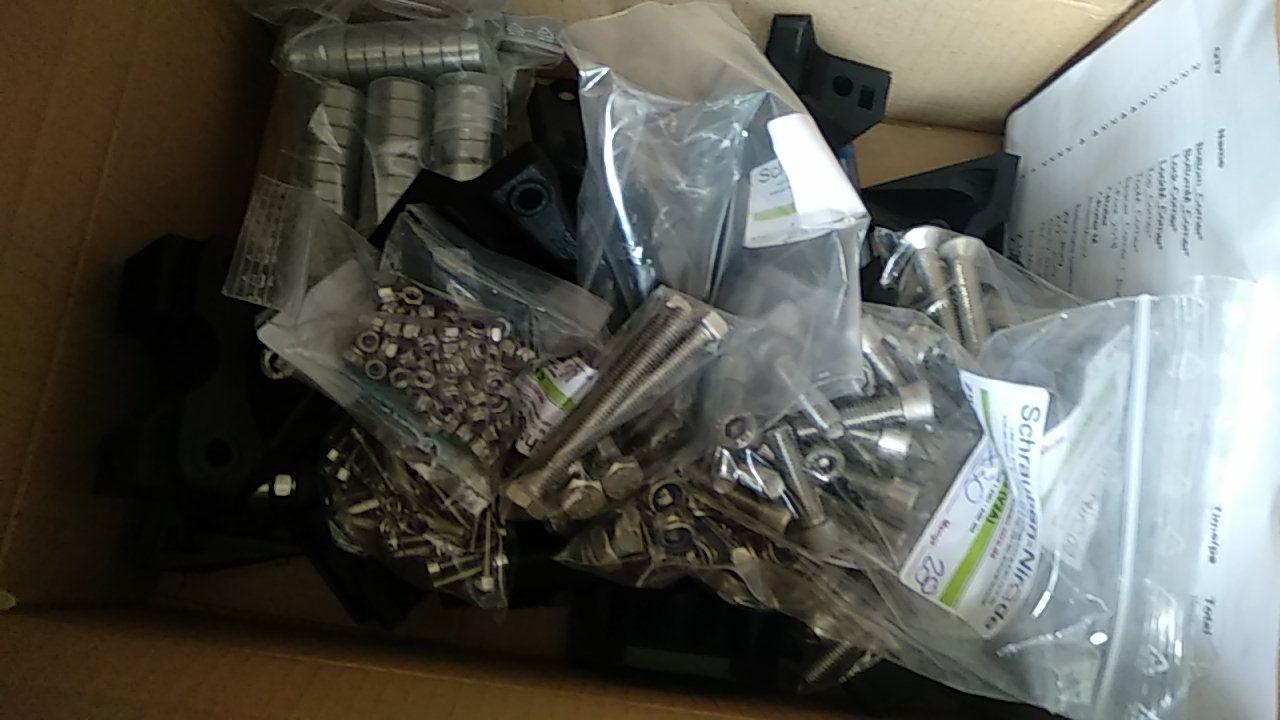 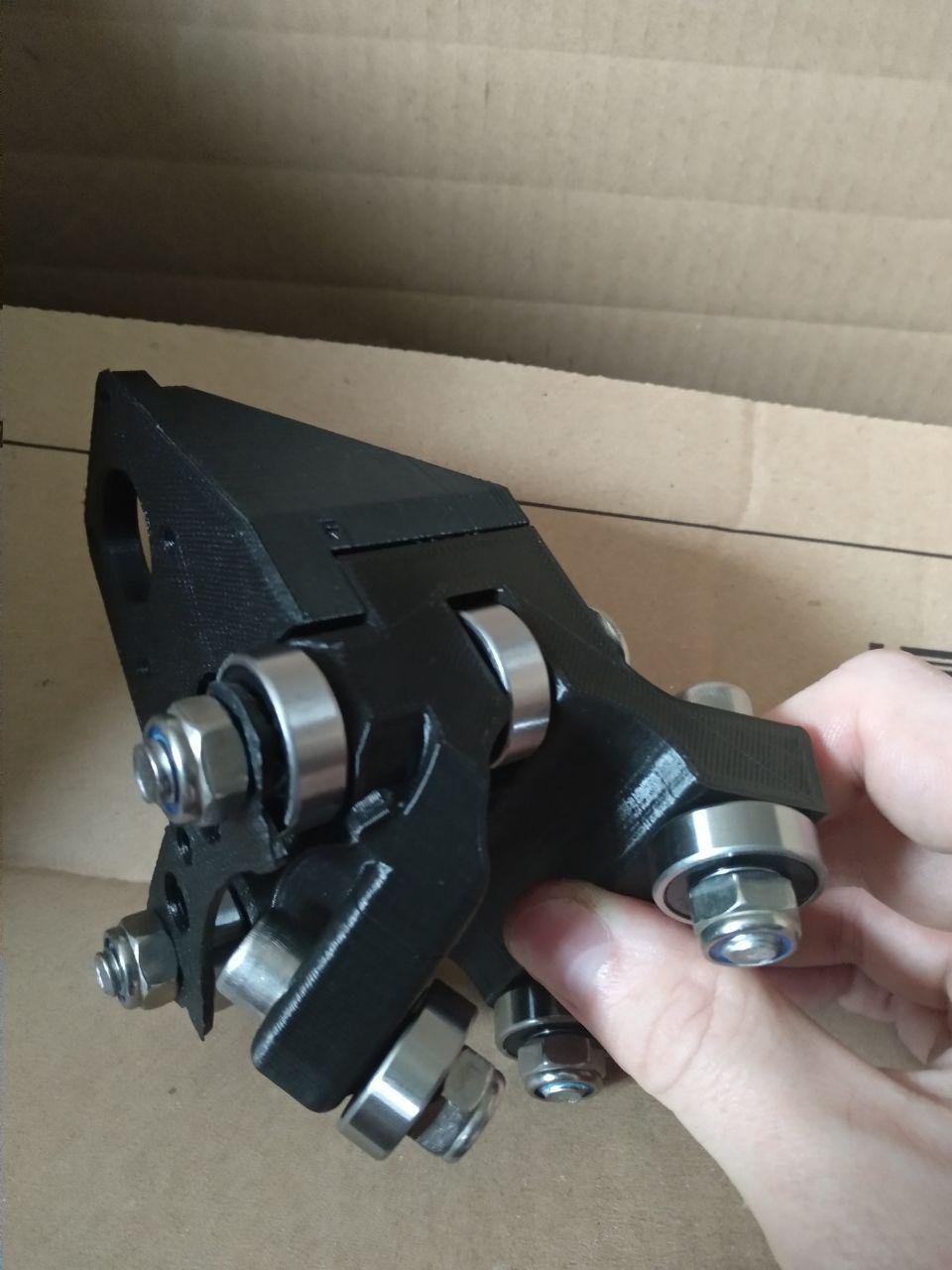 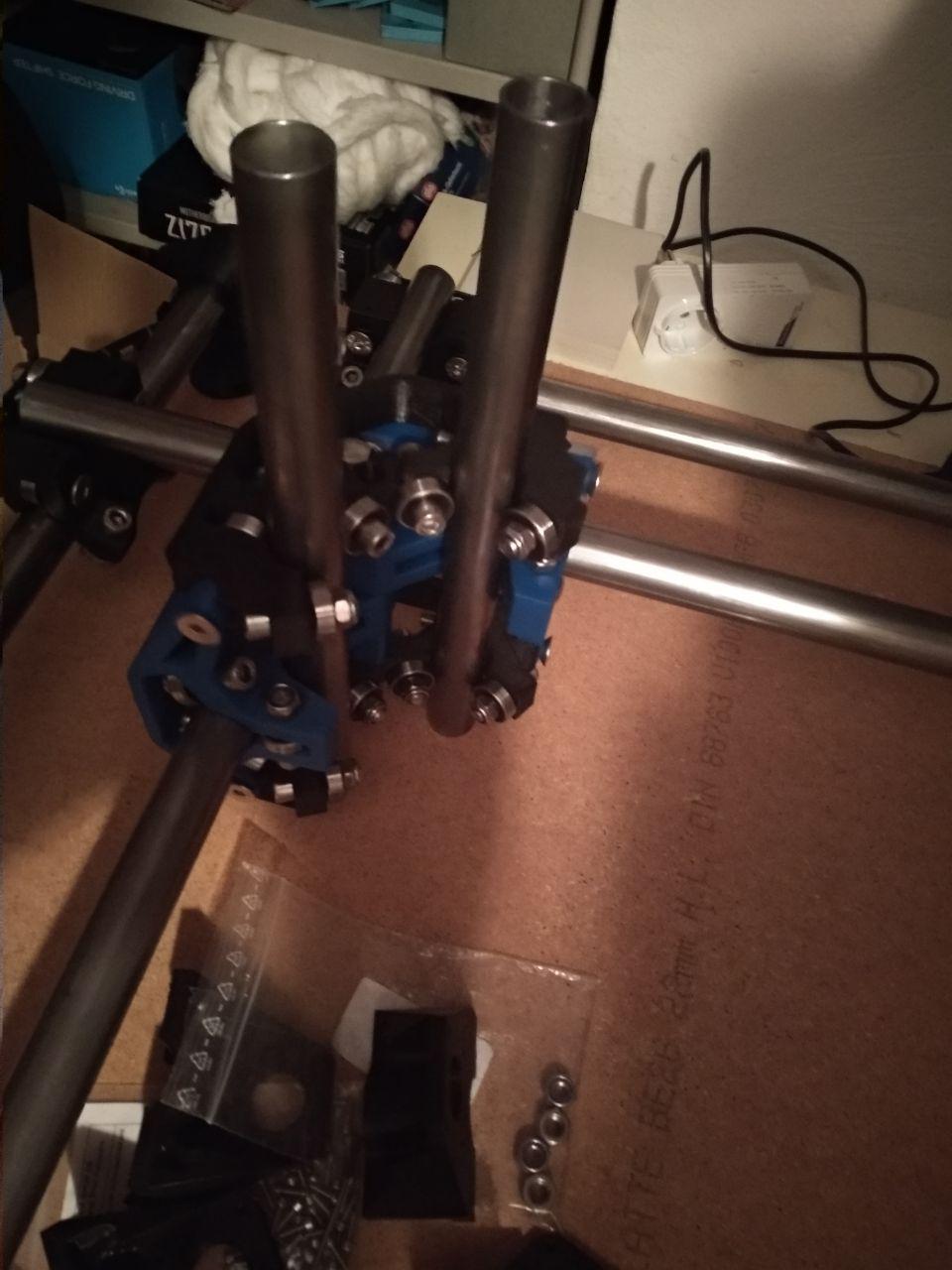 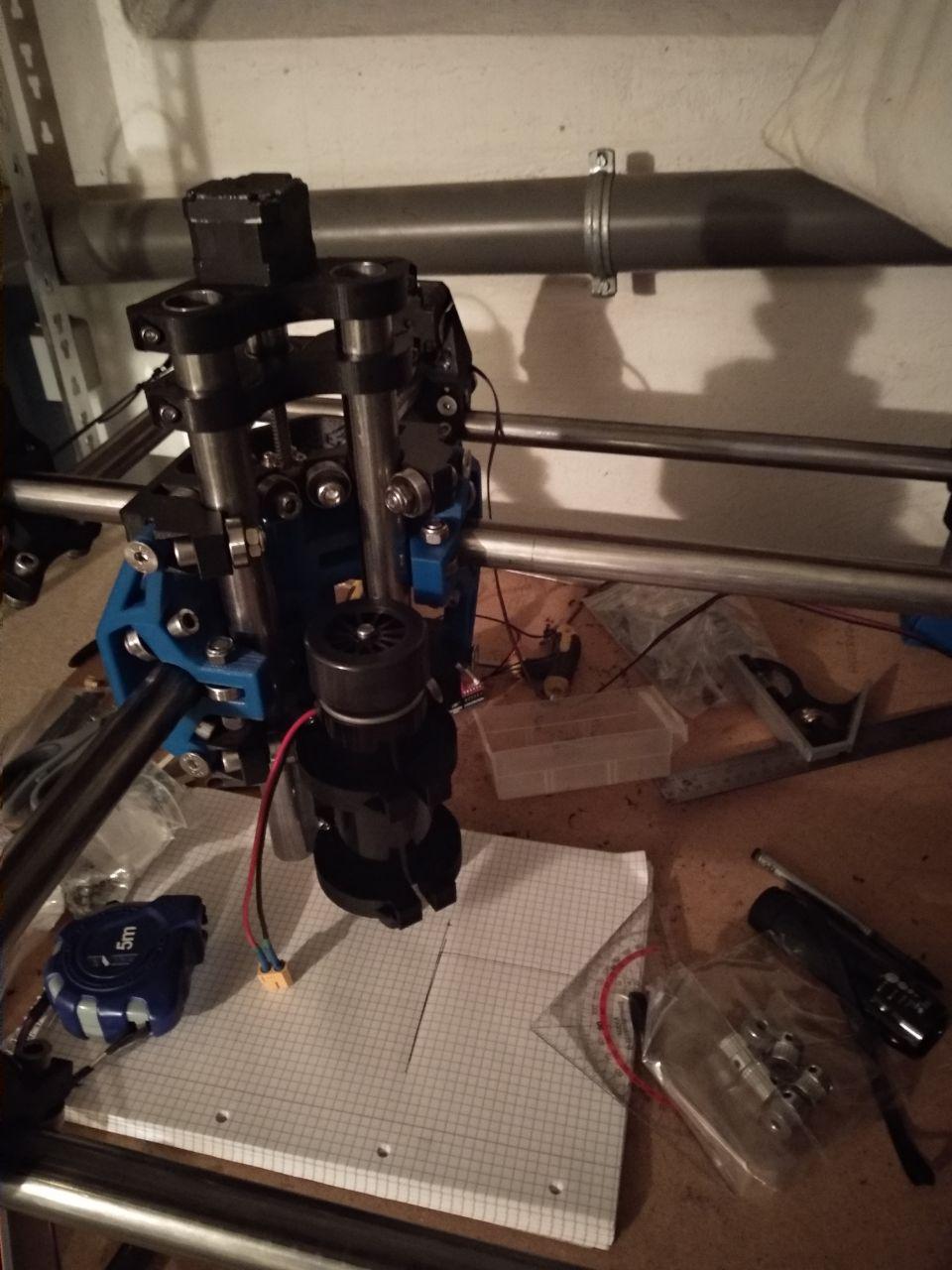 That was a wonderful introduction, thank you , and welcome to the Crew. Your build is a great size to learn and should be pretty easy to use.

It was about time to make some wires! I was hesitating a bit on those, since i really didnt know what to look for - as a IT-Guy, the next best thing that came to my mind was ethernet cable, its cheap, available and it should work right? In the end, i still think it would work, but as i was tinkering, i’ve seen that my LED strips use 4x wire too, so i looked it up and sure enough, you can buy that stuff for really cheap - so thats what i’ve gone for. Even the colors match, nice thing.

What isnt nice, is crimping dupont connections. Its so fiddly and small, takes some practice to get used to. In the end I got it done in about 4 hours, again making absolutely sure doing it as best as i could. The wires are very important, they are controlling your machine - if you screw it up at this point, you can align the shit out of the machine, it still wont work properly.

My dad joined me at this nice spring day and asked “when is it going to move finally?” - sure he thinks i’m completely mental for building this contraption out if plastics and steel pipe calling it a CNC router - but i answered give me 10 minutes. Plugged in all the cables, quickly flashed “something” on the arduino with ESTLCAM - the control panel came up, i pressed the jog button and the thing moved!

I’m not sure yet, if i got the orientation correct but thats not really that big of a deal once you figure out wich direction is the right one and just rotate the connections accordingly.

That was an exciting day, I hope to make the first drawing tests by the end of the week. didnt get to aligning it yet other than making sure the frame was square(ish) and the rails were coplanar to the base.

pro tip @ryan, F clamps are really handy if you put one on the top rail and the base plate to force the rails further into the feet/lower corner bracket. i was only off by 2-4mm and the clamp helped big time doing those rather small adjustments!

Yeah, Ethernet cable is really tempting to use, but the infrastructure type is typically solid core and you really want stranded if you are going to be moving the cable around. Needless to say, most of the cables connected to an MPCNC move around.

I bought a 30m stranded patch cable and connectors suitable for stranded for my next rebuild.

Yeah, Ethernet cable is really tempting to use, but the infrastructure type is typically solid core and you really want stranded if you are going to be moving the cable around. Needless to say, most of the cables connected to an MPCNC move around. ? I bought a 30m stranded patch cable and connectors suitable for stranded for my next rebuild.

as i said, i used those LED extensions, they are stranded and correctly color coded wich makes it easier to follow the instructions. i need it idiotproof!

I settled with the Arduino Uno and GRBL Shield for now, since the Ramps doesnt want to swallow the firmware i throw at it - doesnt matter too much in the end since i dont even really know how to do CNC programs in the first place.

I got ESTLCAM working and as you can see, first steps, the very first thing i plotted was the crown, the second thing are some circles and lines I drew in fusion and exported as dxf. As far as I’m concerned, the thing totally works!

The MPCNC is not a HAAS machine, so i think, optical judgement for squareness and general alignment is appropriate for now. the circles seem to be pretty round, the lines are straight and 90° as they should, all the measurements are correct.

Time to mount the Spindle? I guess so, but first i need to find a place where the machine can take their first bites into some plywood! 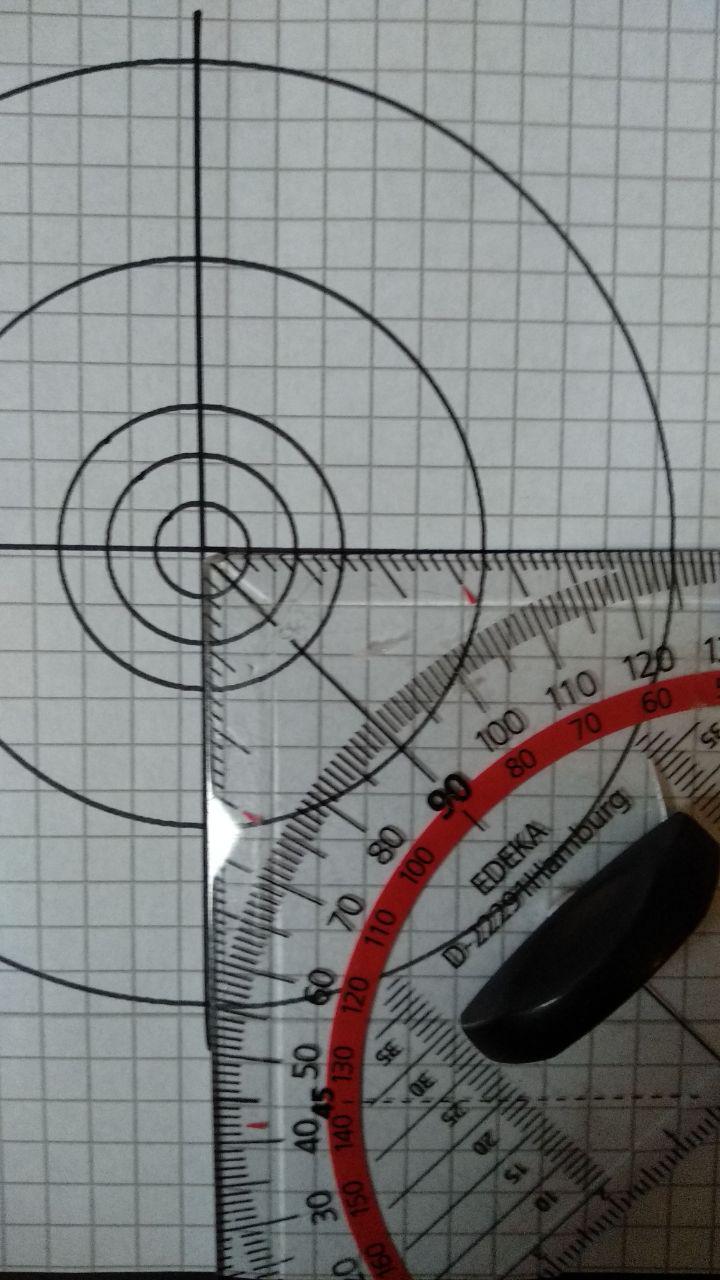 As far as I’m concerned, the thing totally works!

I need a testimonial page for this!

The MPCNC is not a HAAS machine, so i think, optical judgement for squareness and general alignment is appropriate for now. the circles seem to be pretty round, the lines are straight and 90° as they should, all the measurements are correct.

Accuracy is a rough subject, but it looks like you are already in a really good point with your build. I am starting to wonder what the limits are.

Accuracy is a rough subject, but it looks like you are already in a really good point with your build. I am starting to wonder what the limits are.

I cant tell what its limits are, i think it comes down to the components used and on the loadcase. the mpcnc will never be as stiff as a proper built cnc router, let alone a vmc, thats just the nature of things. for woodworking accuracy isnt really going to be the key factor, you are working with really quite large tolerances anyways, if a part comes out ±1mm thats totally fine for most cases.

for metalworking the usual tolerance is .1mm wich clearly can be done on the mpcnc but there will be restrictions and constraints i’m sure. nevertheless, for me, it was and is a really fun project and i’ve learned tons of things building it wich will help me when i wanna build a better one. there must be many half built cnc machines where the owner got to the point where he didnt knew any further and abandoned the project, that would not be the case if he would have dived in with something rather simple like your machine.

anyways, my machine got a bit dirty for the first time, i drew something in fusion, not an actual part, just a square with rounded corners and a 13mm hole in the middle - it rattled quite a bit, i think i need to tighten the long tension bolt a bit?

edit: i know its not recommended, but i HAD to try it… babysteps in aluminium. my Z seems unstable, need to try it with a larger bit maybe, a shorter one for sure and maybe even prop the aluminium up a good bit, maybe with a vise. but for a test, not too bad, proof is beeing attached!