It’s been nearly a year since I started thinking seriously about building a MPCNC. I followed the endlessly long thread last summer announcing and then discussing the coming Primo design. I started buying and printing parts in July last year. It took much longer than I expected to find time to work on this project, but it’s now up and running and I’ve cut out a few things with it.

I live in a new neighborhood with new houses under construction, which means there are many construction dumpsters with small pieces of lumber for the taking. Aside from a sheet of MDF I put under the MPCNC, the rest of the table is constructed of 2x6 boards and OSB salvaged from construction dumpsters. I needed a place to keep my miter saw, so I built a table big enough to keep the miter saw on one end and the MPCNC on the other. The table was getting big and heavy and I wanted to be able to move it, so I put wheels on the bottom, and I’ve put electrical boxes on both sides connected to a single plug. The under side of the table has plenty of space to keep a vacuum and other tools. 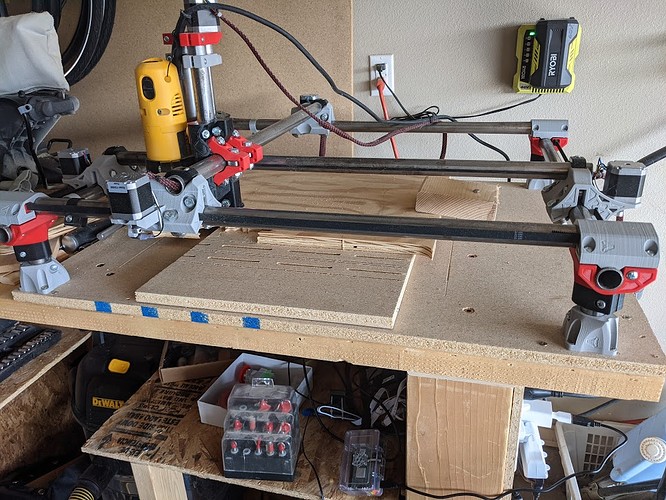 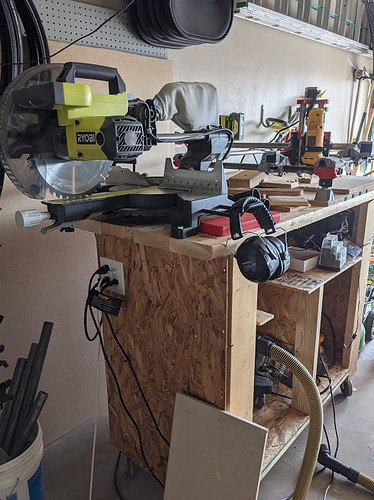 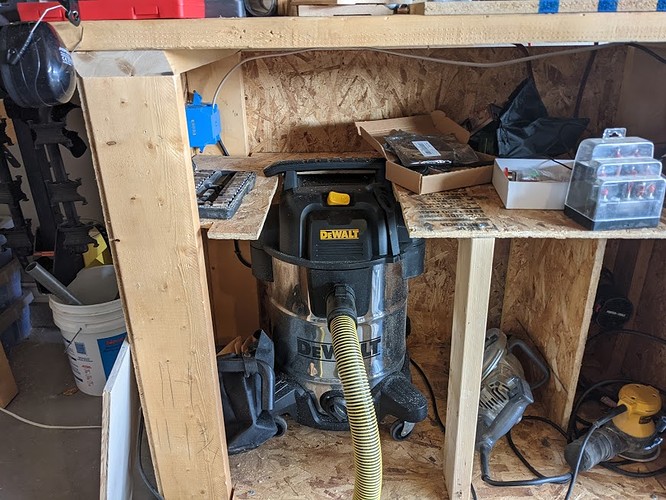 I started out running the MPCNC from Repetier-host on a laptop. I wanted a cheap laptop that I didn’t mind getting dirty in the garage, so I bought an old Chromebook on eBay. It proved more challenging than I anticipated. I can get Linux running on the Chromebook and eventually got Repetier-host running, but it’s sort of a guest OS under the Chrome OS and it seems to be not giving me full access to the USB port on the Chromebook under Linux so it can’t communicate with the Marlin firmware. There might be a way to get it to work, but I’ve given up for now. I happened to have a Raspberry Pi I wasn’t using, so I set it up with v1pi. I’ve successfully run a couple of jobs using CNC.js on the v1pi. One challenge I’ve had is losing communication with the Pi during the job. The job will run to completion, but I can’t connect to it any more. It looks like one possibility is a power supply problem, so I’m testing a different one. However, I’m starting to think there are too many points of failure and maybe I should just find another old Intel-powered laptop that I can use with a direct USB connection and not worry about losing WiFi connection.

Consider adding a Rasperry Pi running the VI Pi image that @jeffeb3 has put together. It provides a browser-based interface for controlling the MPCNC, then you can use the Chromebook as your browser.