It is protopasta, something about the empire strikes black or something. It looks even better in person (and I hate glitter).

I think @mrehorst already has one with this name.

Aww man! I think that was my favorite.

Regarding endstops- I used mechanical endstops initially and kept them from clicking, except when homing, by defining the patterns in Sandify to run from X=5 to X=760 and Y=5 to Y=1600 instead of going from X=0 and Y=0.

I am now using some $3 optical endstops because they are silent, so I can use the full size of the table to run the patterns.

Regarding belts- I don’t see any advantage to running 10 mm belts in a sand table. Sand is not a high precision medium, and 10mm belts bump up the hardware size and cost a little. I made my own pulleys from stacked F625 bearings (6mm wide belts) with printed flanges- they are very smooth, quiet, and will last. I tried 3D printer pulleys with and without teeth and the tiny bearings gave out quickly (maybe too much speed?).

I am going to guess that the motivation for the larger 10mm stuff is that a) Ryan’s stock has all moved that way, and if we want him to sell kits from his garage, he will want them to not be special and b) The idlers work better. The tiny idlers can jam quickly.

But I didn’t design it, I’m just guessing

I’m excited to try 10mm, I haven’t upgraded my low rider and I haven’t built a primo, so I don’t know what the 10mm is like. Maybe I will end up converting everything?

Optical would be nice all I hear is clicking of endstops

I want to apologize for not getting the beta build done. I decided to paint the conduit, and am waiting for the final coat to dry.

I’ll be stringing the belt up after dinner and getting it bolted up to the table as soon as I finish the positioning jigs. I know exactly how far in from the edge of the table the envelope needs to be so I’m printing a set of jigs that will clamp to the table and allow me to position the left rail exactly where I need it for my table.

Oh, I was using the Y=6 as a minimum for my table for a while. I did the same thing with my first build as I did for the layout above. I made the table able to go to the full size of my sandbox, so ay Y=0 it was centering the magnet over the edge of the table. As a result, when homing. more often than not, it would lose the ball after homing Y and then home X without it. As a result, I set up in sandify an opening sequence

This makes for an overly complicated home sequence, but it ensured that the magnet would go out and pick up the ball.

Later, I modified the limit switches, so that they triggered a zero that didn’t lose the ball, and got the “click-click” every time the table came to Y=0. Then I also got it catching the arm of the switch if X was already zero when I homed Y. This probably would not have happened if I’d built it right in the first place.

The optical switches I’m using have mounts differently placed from the SPDT switches that are normally used, they’re slightly larger and spaced further apart (19mm IIRC). They just need something to block light between the sensors. They also trigger low, so the firmware has to be told to expect a low signal instead of the high signal that they get with NC wired switches.

With this design, the X switch is a no brainer. I expect that it would be simple to adjust. The trick with the Y switch (The important one for noise) will be adding something to the truck to trigger the endstop, and figuring out how to make it adjustable.

Sorry everyone I was a little distracted removing a tree today.

Regarding belts- I don’t see any advantage to running 10 mm belts in a sand table.

10mm is not needed 6 works fine. The main reason is the entire build has pulleys, idlers, m5’s, and M3 screws for the steppers. The instructions will be dead simple, I do not have to buy anything new except some mini wheels to my inventory, and the bearings in the larger idlers last 100x’s longer than the M3 6mm stuff. My new mantra is simplify. If it takes me 3 days longer in CAD to use the same parts instead of what randomly fits (lowrider) it will save me hundreds of hours of emails and the forums will not be full of questions about screw sizes and positions, and other random build issues.

I want to apologize for not getting the beta build done.

Whao buddy slow your roll, I am not in a rush. Take your time, enjoy it, don’t feel the need to add a time restraint to anything. I don’t have inventory for kits right yet anyway so you are not holding anything back.

Regarding the homing sequence: another way to move away from the endstops will be: 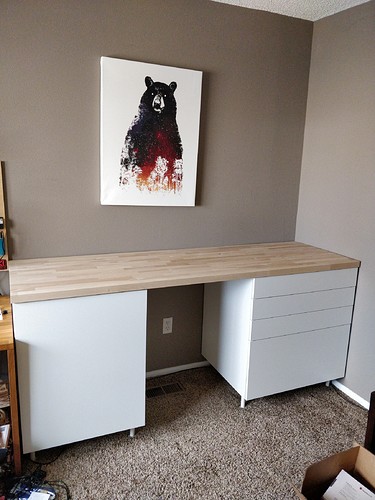 Some big progress here at the Jeffe house.

That is going to be some serious organization!