So after getting really excited about the MPCNC in October and ordering the electronics and hardware kit I have finally printed all of my parts and built the machine. However, I have encountered a couple of problems, the main one (and frankly the only one I care about) is that I don’t think my rails are perpendicular to each other. I have measured to make sure the corner blocks are the same distance apart on both x and y axis and that the measurement diagonally is the same. But when I move the X axis one end hits a corner block while there is a gap on the other side. The x axis is also kind of jittery compared to the y, but that could be due to incorrect belt tension.

I know the machine is just clamped to the table right now but the measurements all make sense. Plus it would be easier to fix now than when I screw it down to a board. 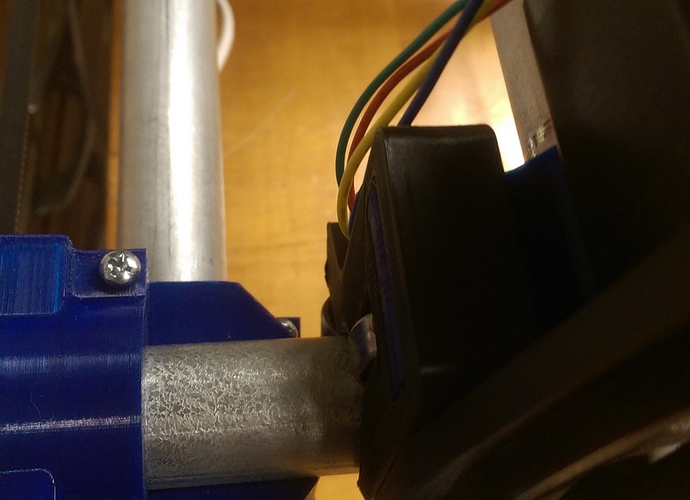 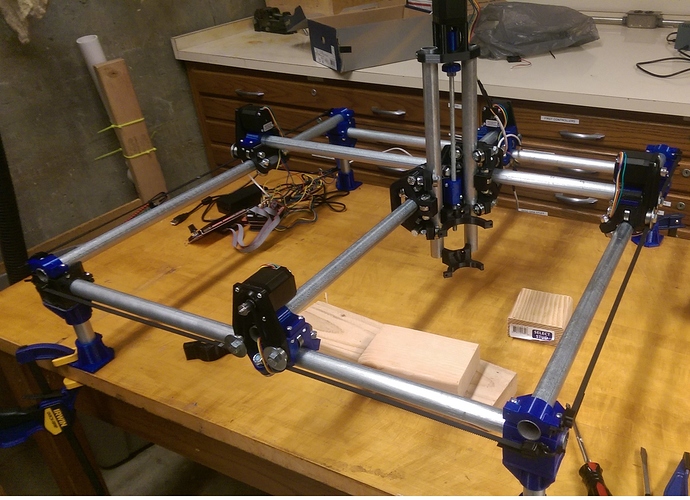 Well…when powered up does it move from one side to the other with no gap? If that is the case then it is just dragging harder on one side when moving it by hand, there is regen braking with parallel wired steppers.

If is it always sitting kinda crooked, loosen up all the center assembly connecting bolts. The bolts that connect the the x and y to the z. leave it on the rails, take the bolts most of the way out and put it back together. While your at it make sure the z rails are parallel by laying it flat surface and make sure the rails touch completely.

The issue was found before I even got the belts on. I will check it out tomorrow. I suspect the problem is caused by one of the middle end pieces. One of the x axis ones was done on a totally different printer with and it was super tight getting it on the rail even with everything loose. Unfortunately the printer that I used to make the other ones that worked great is unavailable until probably this weekend. Hopefully it is something related to that or something being to tight. I have to take the gantry rails out anyway to replace the corner block locks. Idk what happened, but I came back to it today and they were all cracked (though they weren’t the other day). Im going to put some sort of spacer in there to make sure I can’t over tighten them this time.

Side note, I switched to the 11mm z nut holder thing and man was that a pain to get the bottom right screw in without disassembling the center assembly. I ended up hot gluing the nut to a screwdriver and held it in place until it was threaded on enough to remove the screwdriver and glue. Would have been easier if it was off the rails, but maybe that could be something to consider in the possible second version machine. Or just naming the 11mm one as the standard… I noticed a few other people had the same z issue I did and had to switch to the 11mm.

With that center piece, well all of them actually, start super loose. You will need to tighten things over time but you would be surprised at how accurate this is even when it is seems too loose.

That’s the weird part the 11mm didn’t used to be standard. I shipped 13mm ones, went to a larger vendor and now I have 11mm. the 2 local hardware stores I have sell 13mm? crazy, and who knows what the rest of the world has. Tough making a machine easily sourced worldwide. I was up half the night sketching a new idea for adjustable tube size to make it easier … doesn’t seem like it will work. Bummer

About to loosen everything up, hopefully it helps without having to re print the middle end.

Strange about the different sizes,. If it is the same thread size I would expect it to have the same OD. Guess not.

Edit: Dang, I knew this would suck. Because I ran the stepper extensions through the conduit I can’t take the center assembly all the way out. I decided I would do everything right the first time and soldered the extensions. I didn’t print the solderless mounts because I was planning on plasma cutting the motor mounts anyway. Guess I can’t change those out either unless I want to undo my soldering work.

I know this would make the center assembly a little bulkier, but would it be possible to make it so wrenches actually fit in there when assembled? Using needle nose on bolts is not my favorite way to do things.

Your wish is my command!!!
Shhhh, don’t tell anybody.

Do the forums seem any faster to you? 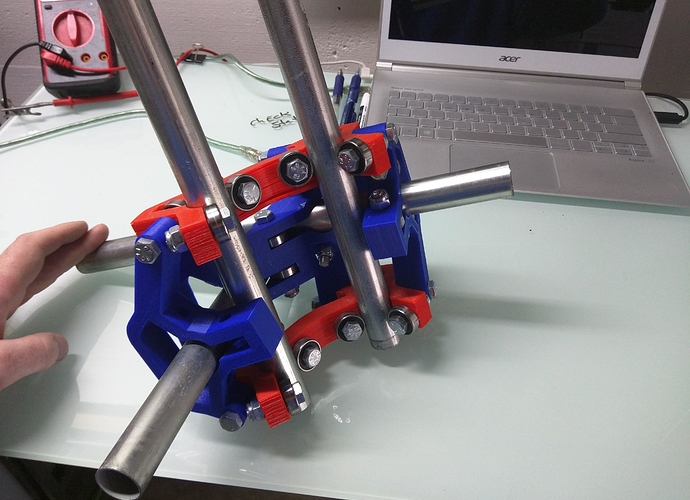 That, is amazing. Immediately after posting that I thought I sounded like a wining kid because you have put so much work into the center assembly.

Actually, yeah it does seem a bit faster. It was probably the slowest I am part of, but now it is catching up.

Loosened just about everything I could (1 or 2 bolts were not accessible with the tools I have where I am working on the machine) and the Y axis is basically jitter free now. X is a little better but not much. Also, the weird gap is gone. The sides meet evenly (at least that I can see) now. Now I just have to figure out the x axis jitter. It almost has to be that middle end is too tight like he shrunk it down by a couple percent by accident. When I drilled out the holes it was way more work than the other ones and getting it on the pipe was a challenge. Looks like I am going to have to cut at least one splice job to replace that middle end. good thing I left some extra on each end.

Whoa, is that a new center section? Cool!

With that one I changed the conduit spacing, I want to change it back. I also want to try and move the corner most bearings out further. I made that one in Dec/Jan, stared at it for a month and now I want to change some more things. I made a new corner assembly as well, didn’t work well enough so minor changes and re-print. Might have to get another printer running.

I know how that goes. The robotics team I am on is doing what is effectively a contracted project and every piece on there has been through so many redesigns. Our flashforge creator pro has over 600 hours of printing on it from this project. Looking to get something like a gmax to print large parts or many parts at the same time. I wish the other people on the team would slow down and think about things sometimes. Would have saved many re designs.

Along that line, I was scheduled to print my replacement middle end tonight but someone started more prints for the other project so I have to wait. The contracted project is more important anyway. Hopefully I can still have it printed by sunday. I really to get this thing up and running so I have a large printer of my own.The fabrikator mini at 80 by 80 by 76 is really limiting. But at the same time it is nice to move it around and the prints are amazing when you get the z height in right.

well I had the go ahead today to print my new middle end piece but maintenance once again locked me out of the stairway that leads to the robotics team lab where I have my filament and the mpcnc. Hopefully they get their heads out of the clouds and realized that we have approval to be down in the basement working in that room. If we can’t get it unlocked today that actually sets a lot more back than my mpcnc.

Replaced the questionable middle end piece and all of the roller f locks. X axis jitter was reduced by about 90%. Still a little there, but it might be fine when actually running a program instead of me jogging it with the lcd.

Got my extruder wired up and set the current limit on the stepper driver. Then proceeded to drill straight through the screw hole for the extruder mount. So I have a new one printing hopefully I can get a test print done tomorrow.