I am completely new to cnc milling but have some experience with 3d printing.
So I hope someone can give me a step by step guide to what to look for and possibly a solution.

I have a lowrider2 cnc. everything bought here on the site.
Motherboard: RAMBo 1.4 with dual endstops and Z-probe
firmware: dual endstop.
CAM: Vcarve
G-code Sender: CNCjs on windows 10
Post processor: Marlin_mm test 5
Router: Makita RT0700C.
Bit: Single flute ″1/8 ″, 8mm / s Feed Rate, 3mm / s Plunge Rate, 1mm Depth of Cut, 40% Step Over
Material: plywood
t
I’m making my first cuts for a fence to my spoilboard and some clamps and it’s not going well.
It seems that after a task is finished, the next does not align the previous.

See pictures, the one with the profile

I stopped the job as there was no reason to continue, therefore there is only 1mm profile
As you can see it is getting worse and worse on the y axis.

First I make a pocket toolpass 4mm deep and then I “drill” the holes also via a pocket toolpass start depth -4mm and depth 8.5mm.
Eventually I run a profile.
All in one gcode file, as I do not have to change the bit.

I have also tried to make a test cuts of a square and it did not measure the same length and width either. about 4mm difference

So something is completely wrong and for what I need it my cnc for is currently useless.
The problem is that I do not know where to start and how to solve it.

That is not good. It can definitely do better than that.

Here are my first thoughts:

That frame you’re cutting looks pretty neat. I would like to see it when it gets finished.

So something is completely wrong and for what I need it my cnc for is currently useless.

This is solvable. This isn’t how it is supposed to work at all. Your LR will be screaming through jobs once we figure out what is wrong.

Feel free to post some pics of the build and the wiring and stuff. Maybe something is installed wrong and we can spot it.

I have just been to the workshop and planed about 1.5mm of the table in the y axis. there were approx. 1-2mm space for z axis tubes.
Did not know if there may have been some inaccuracies in the wood due to humidity, although I had them through a plainer before I assembled the table.
When I do not have the belts on run it very smooth on the y axis but have som resistance when the belts are on. but not so I think it’s a problem … a bit the same as on my 3d printer
I have not had time to test if it has made a difference yet.

There should no be any wires stuck in anything. but I can install a cable chain on the y axis if that can help.
can the vacuum hose be a problem? can it be too heavy to pull?

I have also tightened the screws on the pulley, as you suggested, they were a little loose. But as I said before not tested it by yet.

I’m glad you’re confident, because I have to admit that I’m a little exhausted at the moment.

But I should probably just spend some time playing with the daughter and then come back tomorrow with new energy and report back.
It often helps to put some distance between you and the problem and then try again later.

I’ll take a lot of pictures tomorrow morning and then we’ll see if you can find a few bugs.
And of the fence, when everything runs correctly.

thanks for your reply and help.

I’m glad you’re confident, because I have to admit that I’m a little exhausted at the moment.

But I should probably just spend some time playing with the daughter and then come back tomorrow with new energy and report back.
It often helps to put some distance between you and the problem and then try again later.

That’s a great conclusion. It will definitely get better.

You clearly have the skill and mentality to fix it. Your luck just means you will have to labor a bit more than others before you get it working.

I hope it was just a loose grub screw.

I can install a cable chain on the y axis if that can help.

I would skip that for now. Just watch it work and be aware of anything that might snag. Cable chains can sometimes bind, and it isn’t obvious at all when they do.

Then I cut a few test cuts again, after the small changes I mentioned last.
I have planed the sides that the y axis run on to provide extra space in case the humidity should have bent the wood.
I have tightened all the screws for the pulleys.
Checked all the bolts, checked if my belt is tight enough. and set the DOC to approx. 4mm instead of 1mm. and run without the dustshoe and the vacuum cleaner hose on, and vacuum manually.

unfortunately it has not helped.

I then tried Estlcam 11, to see if there should be a problem with vcarve and the result is a bit the same.
Then I made a new test drawing with the same depths and with easy measurements to remember. pockets must be 18mm with 5mm hole in the middle, there must be 10mm from the outside pocket to the edge of the profile on both sides and the profile is therefore also 38mm wide

as you can see in the pictures it is completely wrong and in addition it can not make a straight line along the y axis, but instead makes a curve. as shown in the last 2 image.
in addition, the extra circle at hole 3 is not something I have made a toolpass for and was also not something that I can see on my preview

The first 2 cutouts are made with vcarve and the last one is with Estlcam. I use CNCjs with windows via usb. Can CNCjs on windows be a problem?

I have also checked thoroughly for skipping steps, both by observing the belt and the stepper driver but also listening for strange noises. and I have not observed anything.
There have also been no wires or anything else that could have an impact on the result.

Here are a few pictures of my lowrider. hope someone can see an error that may be to blame for the bad result.

Just to simplify the issue, what happens if you just cut a single 100mm square. Measure the sides and the diagonals and see what you get.

Circles and drill holes and pockets can complicate the issue with additional cam settings but a simple square with a reasonable doc 4-6mm and feed rate of 6mm/s and a finishing pass of .5mm at full depth should make a pretty accurate square. If it doesn’t then the measured geometries should point to the culprit.

Hello. i just got in from the workshop because i thought a bit the same way.

Just to see if it was square and actually moved the amount as it should.

However I did it manualy by jogging the machine in cncjs on paper though, to eliminate resistance and gcode.

I will make a gcode and test it tomorrow. 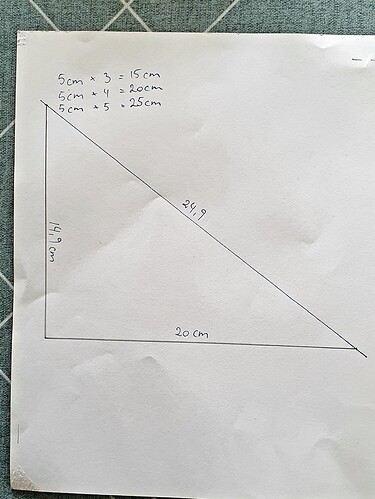 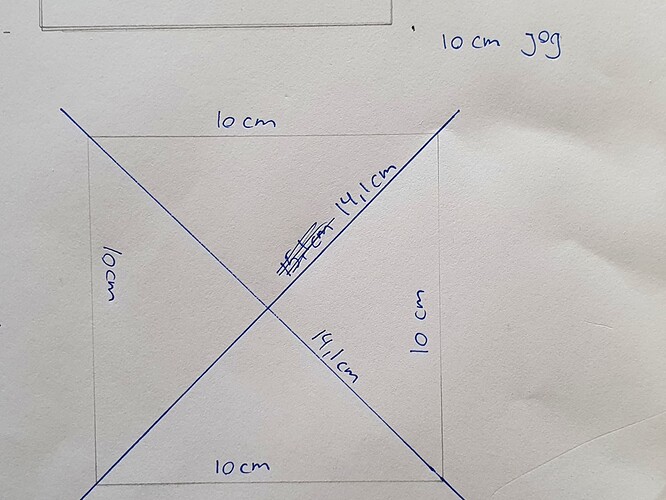 Ok since you have the pen attached create a circle and run it with the pen and see if it’s circular my guess is that it will be.

Next step would be to look for slippage/skipping steps, the standard issues are the ones Jeff suggested above grub screws, loose belts, parts rubbing, bearings overly tightened etc.

However, all these things seem to be ok.
I saw no skipping Steps, the belts, screws and bolts are tight and loosen 1/4. And did not se any rubbing parts.

Have you measured voltage on the drivers? Maybe you aren’t providing enough power?

If you move machine by hand does it move freely?

I would try drawing a big square 3x or something and hopefully the gremlin will show.

I still wonder if it isn’t tracking straight on the wheels, and you need some kind of rail to keep it straight.

Yes it is moving freely

but personally i think it is the curve that is the problem. if it had not been there, the 99.5cm would probably have been 100cm and thus a right-angled triangle.

a small addition. when i ran my first test i noticed a faint click sound from inside one y axis stepper motor. that is, the one to which the curve points to. while drawing in the x-axis direction … that is, the y-axis did not move, and should not move, while the clicking happend.
I ran a couple of test to see if it repeated itself, there was no noise.

which rail would you recommend?

Perhaps you could shorten the X gantry a few mm so that the Z tubes lightly brush the sides of the table.
This way the wheels will not be able to translate in an unwanted way.

it is an option. but if I do that, will it not cause problems with changes in temperature and humidity and its impact on the wood from which the table is made of.
I live in Denmark and there are large fluctuations between summer and winter

Understand, so you could try to constrain wheels on Y with L shape aluminium profile

i just bought a pair of u rails for the weels. And going to install them tomorrow, to se if it helps. 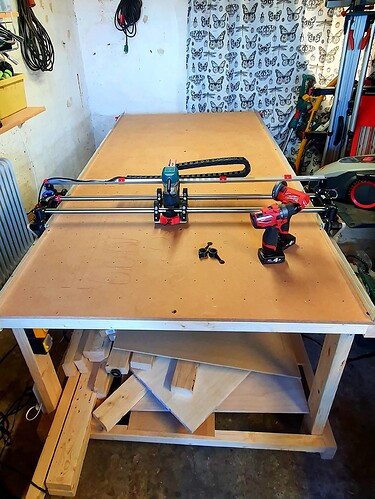