I have made some test cuts on my mpcnc.

And is there a way to make the z stepper stronger in lifting and holding? 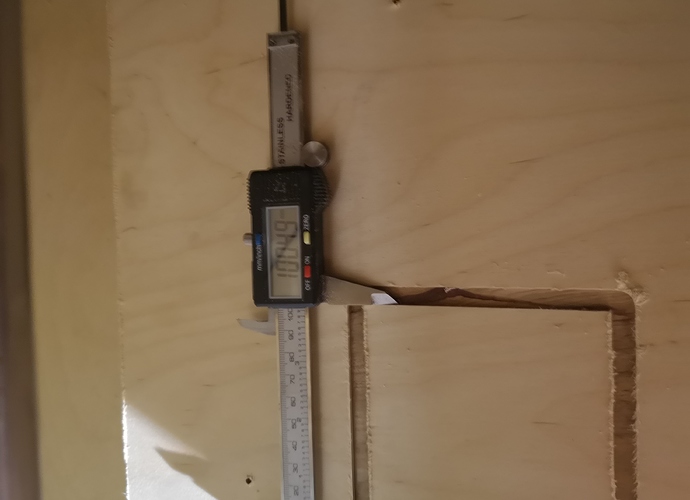 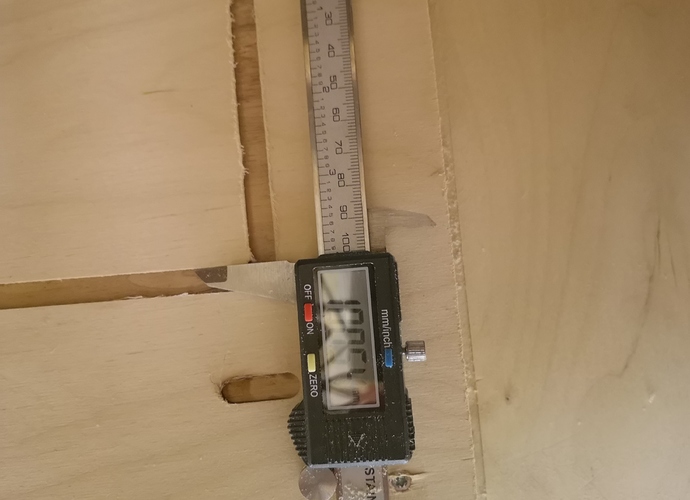 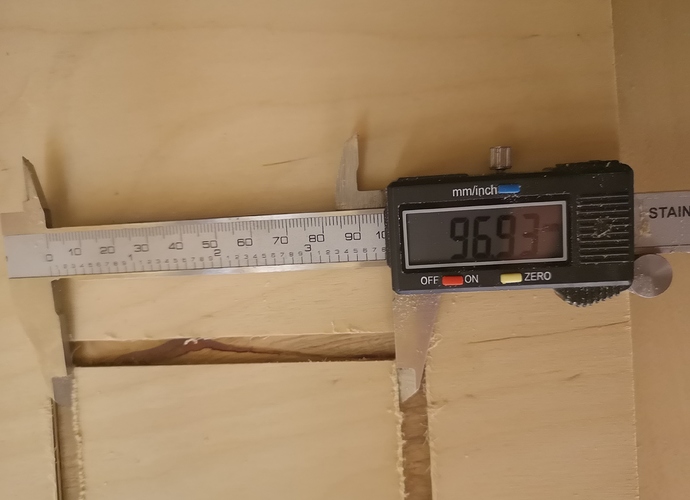 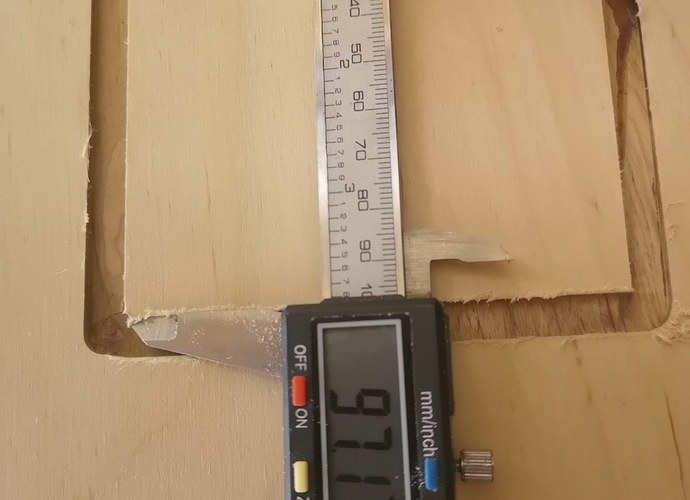 And is there a way to make the z stepper stronger in lifting and holding?

For what reason, you should not have issues with my kit in this department.

Tool, endmill, feedrate, finishing pass, how square is it?

Measure the diagonals of that cut, lets see how square it is.

A few pictures of your machine so I can check for obvious issues will help the most.

Regarding the power of the z stepper, i dont think, or rater i know that i use a “to big” router. I use a Bosch gof 900 that i have modded a bit. 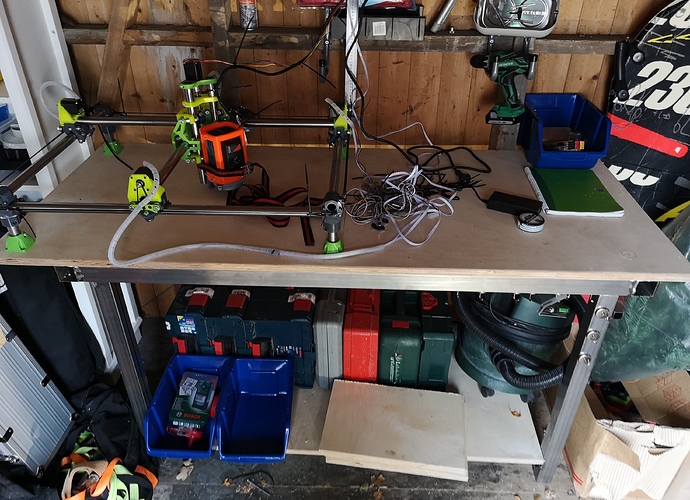 Uh, for that you really might want to consider designing a new Z axis. My guess is that is going to destroy your steppers bearings.

Just alittle bit ashamed, its a little off square, but not enough for 3mm wrong.

Just one pass, no finishing pass. 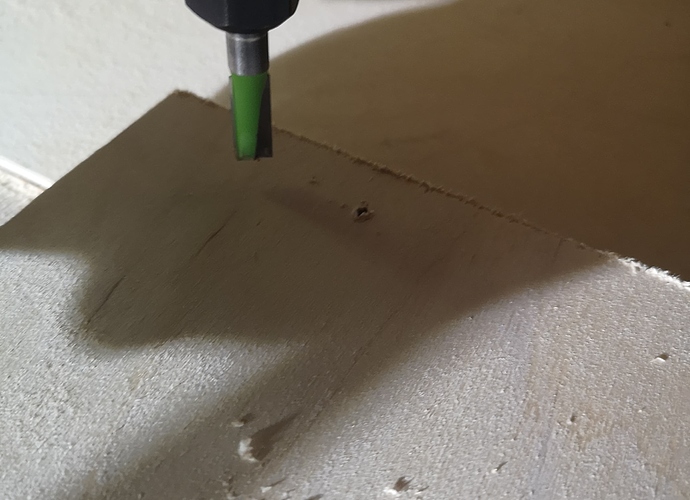 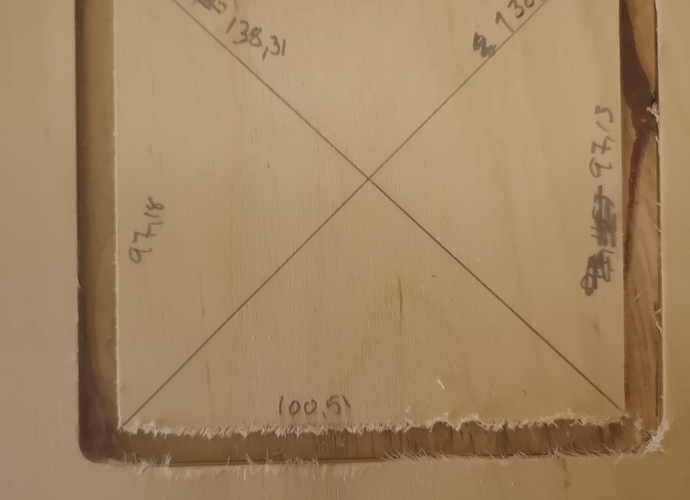 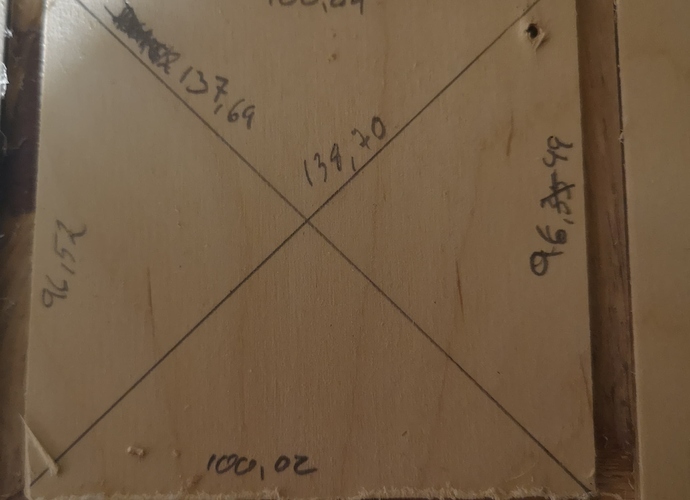 I am not sure what to say, with your setup I have no idea what to expect. You have a giant router strapped onto the gantry. The router looks to be using a 1/4" bit, pretty deep, and 10mm/s. To me that seems to be a pretty high load for the strap not to move some. The belts look a little loose and the zip ties are at a weird angle (this stuff matters or you will make a spring). 3mm off means it is only 1.5mm of and it happens in both directions.

We go to great lengths to solidify things and balance weight, power, and rigidity. Straps are only rigid in one direction, away.

That is also a straight flute bit not good for slotting. Did you use a finishing pass?

The router is not straped, only when i glued the holder.

The router is about 1kg hewyer than the 600w.

I use tools with 8mm shank. And maybe not the best Tool for the Job but its a slotting bit.

But defleksion should go both in x and y, not only y?

Im gong to take a slow shallow cut tonight and se what it makes.

I’ll play. Your zip ties are too long. One end should be pretty much snugged up to the corner piece. The other end shouldn’t be much longer than a half inch, and the sides should be flat. If the tie is still roundish after tightening, it’s not tight enough, it will spring. Cut the tie holding the power cable on the tower. Those tubes are a lever, and any movement on the top will cause the opposite movement on the end mill side.[attachment file=72504]
As for the router…

[attachment file=72505]
Sorry, couldn’t resist… It’s little too big I think. If it’s glued, how do you adjust perpendicularity? If it’s not 90 to the work surface it will cause issues the deeper you cut. If there’s an angle, your first 2mm pass will be alright, but the next 2mm pass might be cutting 2.5 or even 3 mm. The next will be worse. Eventually the bit will start to pull the router around. Also straight bits aren’t the best for cnc.

Not trying to slam your build, it’s pretty cool, just throwing my .4¢(inflation) out there to try to avoid some frustration. 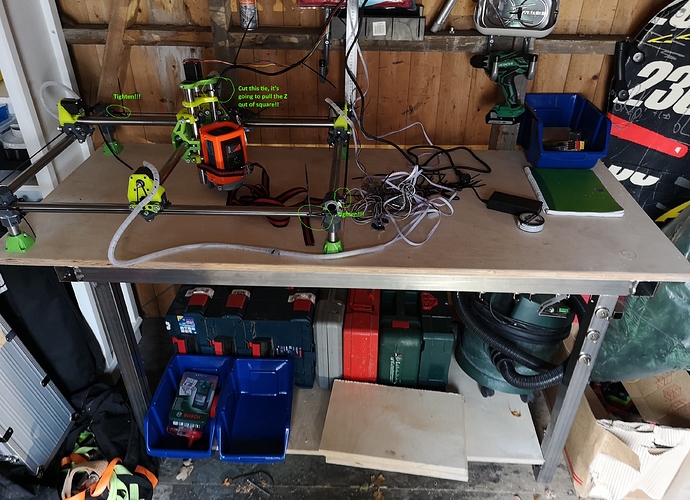 We will get you there eventually. We are trying but it really could be a lot of things all at once adding up or just one big thing.

The routers weight isn’t really the issue it is how far from the crossover point it is. That distance decreases rigidity linearly. I have this one in the FAQ’s. So twice the distance half the rigidity. It also takes up build volume so you could have built the machine smaller/more rigid. It’s all a balance. The bit is a similar story but with careful calculations you can control the bit load but in general you are trying to cut a lot more material at once. For testing an 1/8" upcut single flute bit will have the easiest load to control, by double (half the flutes). Straight cut bits are a specialty and are a large load bit. You are cutting the entire face at once, spiral bits engage in a much smoother fashion. I am not trying to scare you away I am trying to prove it all matters. All the little things you are doing differently all add up.

With all that said a few things to try, Barry has solid suggestions, make the cut again but 1/2 - 1/4 the DOC and less feed rate. Just until this gets sorted out, and Always, Always use a finishing pass.

I can change the ziptied stup No problem, but it is as tight as it gets, have pulled some zipps to tight so the broke. Any tightar than now they Will break.

And yes im compensenting for some ting, im used to large tings, and with big hands its easyer when router is big ?

Verify the diameter of your bit.