Milled PCBs are the order of today: 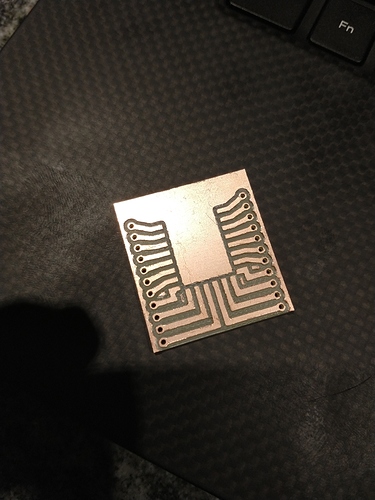 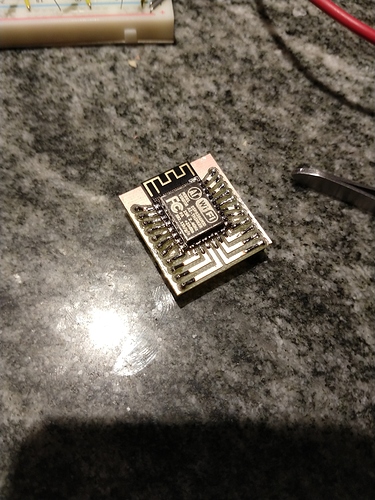 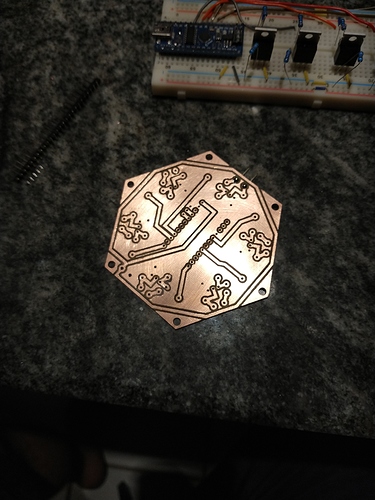 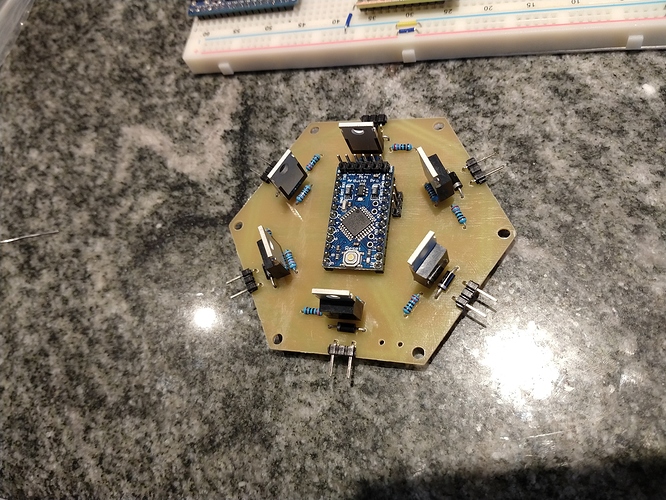 Sorry I split this just so I could add it to the Gallery! Hope you don’t mind. I can put it back if you would prefer.

Cool! What are you building?

I’m betting this is driving the solenoids for the radial engine.

No worries, this is fine!

The esp8266 is not involved…I had that lying around for 5 years when a co-worker gave me one to tinker with. It sat in a box and I just found it. In the time since he gave it to me (even though I was into arduino at the time, I had NO idea what an esp8266 was), it has gotten extremely popular, so I just whipped up a breakout board while i was at it.

The big hex board is indeed for my radial solenoid engine. I am using mosfets to drive the solenoids, with the arduino providing the logic. Right now, the timing is “dumb”, firing the cylinders every X miliseconds, adjusted with a pot; no feedback for crank position at this time. In testing it idles well, as long as the speed is increased slowly allowing the mechanicals to keep pace. I dont think this timing will work if I ever try to load the engine, but this is basically a desk toy to allow me to practice all sorts of design and manufacturing skills…and because it is COOL

Unfortunately I plugged in this board for the first time today and smoked the regulator on the arduino. The pro mini is SUPPOSED to handle 12v input. However this was a china clone, and who knows what regulator was on the board. Some people report the china clones burning out around 10-11v on the RAW pin. I am going to add my own 5v regulator to the design. Amazon here is come…

when a co-worker gave me one to tinker with

That’s funny. I was so impressed when I got my first ones and they came in a huge pack for very cheap that I gave a few to coworkers who didn’t ask for them. I never heard anything from them about them. I’m guessing they are in a box at their house somewhere too.

I think I have just been intimidated/lazy in wanting to learn it. I am a mechanical guy…I know just enough software to be dangerous. Over the years I have gotten pretty comfy with arduino. I am sure I will figure out the ESP well enough, its just an investment.

Also, I dont necessarily know what I want to do with it. There are so many options for commercial connected devices to turn on your lights, tell you the weather, etc…I didnt know what I would be learning it for.

There are a lot of choices. You can easily start by just putting a temperature sensor on it and having it publish to an mqtt server. Or you can have it host a little web page with a button to toggle and output which controls leds. There are some pretty good firmwares out there for it, like tasmota, which don’t require any programming.

You can literally treat it just like an arduino though. It is 3.3V, and the analog in is only 1.8V, IIRC. It has wifi, but you don’t have to use it. It is also really freaking fast compared to the regular arduinos. But it’s hard to use all that speed.

I once built a “useless machine” using two Adafruit Feather boards with ESP8266. One board monitors the position of the switch and posts it to the cloud (MQTT on Adafruit IO). The other board gets the switch position from the cloud and activates a servo to turn off the switch.

The boards are 3 inches apart but physically unconnected and they only talk via the cloud.

As far as useless machines go, it’s even more useless than usual.

I had a hell of a time with this thing tonight. Seems more finicky than an arduino. Too many pins to pull high or low to accomplish things.

In the end, I managed to get it connected with a usb to ttl converter module, and uploaded a blink sketch to it.

However I could not for the life of me get AT commands to work in the arduino IDE serial monitor.

You need to load the firmware that does the AT commands. I’ve never used it like that.

The flashing on the 8266 is a bit of a goofy dance. The nodemcu versions have that all taken care of.

Have you seen the node or micropython firmwares? They are pretty fun to play with too.

But you’d save a lot of effort going with a nodemcu setup, at least, to handle all the pin juggling.

I had assumed (apparently incorrectly) that the stock FW was set up for AT commands. I tried to re-flash the FW, and you are right about the goofy dance as I was apparently unsuccessful with that, too.

I may have to check out NodeMCU. The blink sketch works, so I am sure I can carry on with whatever FW is loaded as well…just not sure how to do that, lol.

Look up how to flash the micro-python firmware to it.

Then the esp boards become a whole lot easier to program. (Or at least they did for me).

The first thing I do when I get new esp boards in now is flash the latest micro-python firmware onto it.

I took a few months off of CNC and making in general to work on some home repairs, but I decided to pick up an old project last week, and it needed more circuit boards.

I made a nice improvement to my process this time, cutting my traces with a SUPER fine tip engraving bit (advertised as .1mm nose diameter, 10 degree engraving bit.) The I had to restart the program 3 times because the tool, when brand new, is SO sharp that the nose breaks down almost instantly when it begins cutting.

Once the tool wore down to the point (pun intended) that the nose diameter was substantial enough to stand up to the cutting force, it settled in nicely and ran the entire board with no problems. This tool let me decrease my trace width and spacing dramatically, resulting in a smaller board that was easier to route (especially important because it was single sided. Downside was an extra tool change since I cant drill and profile with the engraver. Id like to start doing all surface mount to eliminate the drilling, but I have so much through hole stuff in my stash, oh well. 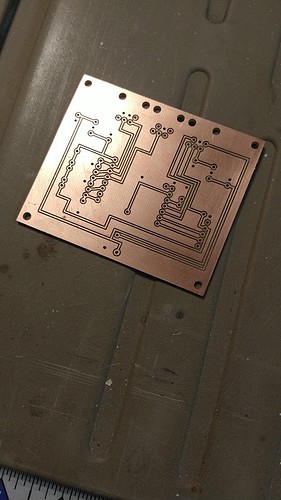 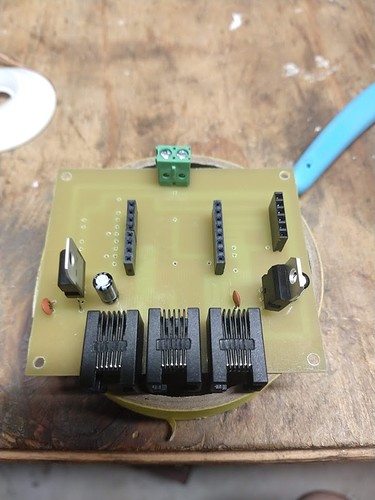 bunch of components to be populated still.