Ok, y’all helped me get right with the last question and I ended up with the teeny tiny mpcnc, which is really great. Looking for a little more steering.

I do like the hypercube, seems solid, big community. I also like the piper 2 (a lot), especially how the bed stays put, but that is a LOT of steppers! Hypercube is the build to beat here.

I want to use more than pla without hassle, accuracy/surface quality > speed. Yes, my ender 3 is great, especially for what I paid, but I want to use it for fast functional/prototyped stuff that will either get recycled or used in the garage (clamps, knobs, etc). I considered hotrodding it, but I’m not convinced that’s a great use of resources. Plus, my daughter wants to help build the printer, so I don’t need to finish tomorrow or anything.

Points for easy enclosure, direct drive, and 3d printed /cnc milled parts (i can cut aluminum, too, at about 6"x9").

Not a lot of documentation on this one, but I like the idea here.
https://grabcad.com/library/plakat-from-shisan-1

I still haven’t picked my next printer project. I honestly would have bought the seckit skgo so many times, but it is never available. I would self source, but the flat part files aren’t open source (don’t tell the foss police).

I was thinking about building @stewart’s GridBot. I just saw it yesterday when poking around at his non-kiri:moto projects. It checks a lot of the boxes for me. Not much info, but I think there’s enough for me to get through it. It seems like a nice, big build, it isn’t an i3 design (i3 are great, but I already have two). I like that the bed isn’t cantilevered. I like the corexy linear rail system. I am not sure about the bowden, but I would try it that way first.

The other two big contenders are the original prusa mk3. But that is too easy (and looks like my other printers). People seem to love it though. And the MP3DP. I have one and I like it. It was a fun project.

Edit: My other thread where I was talking about new printer options:

Printer Recommendations Random or Off Topic

As a xmas present, I got the go ahead to spend some money on a new 3D printer. What should I get? Nothing over $1k, closer to $500 is preferred. It came with the caveat that I need to get rid of one of my other two. So I also need to figure out what I cam do with those.

I have four GridBot v2 running at home. I ran a class at my previous job where 10 people built the GridBot v1. I’m also working on a v2.5 that supports auto-changing heads like the E3D demo, re-adds normal endstops (don’t like stepper stall detection with belt drives … too inconsistent), and alters belt routing ever so slightly.

Thanks. I’ll have to take a closer look at this. Cantilevered bed not high on my list of likes, either. I’m sure it’s “fine” because ultimaker uses them, but I think I’d much rather have a bed supported on two sides at least.
Stewart, that looks like a mighty fine build right there. Had to create an onshape account so I can check it out a little better.

The Gridbot looks a lot like my FLSUN Cube. Mine has the Chimera hot end to give me two colors and I’ve added filament sensors…

Jeffe has a nice thread we’re we all threw out different opinions about known printer designs and the merits of each. What was it called? Something like “What printer should I get next?”

Just throwing my general opinion out there.

For small (almost tiny) printers I would suggest models like the prusa mini. Where they only have one one Z axis (hardware on one side). Usually a Bowden setup and a small bed. Ender 3 kinda fits into this category except for its size. I plan to build a custom version of this type soon as a project with a friend.

Then you have the medium size printers. Where in my opinion the i3 is the best basic design. Where the bed moves back and forth. And the z axis has motors on both sides. Lots of good designs here but I am one that holds the Prusa Mk3s as the gold standard that others are compared to here. Plenty of quality models. I am building a custom version of the MP3DP and I am excited about it.

Then for larger printers I think you have to switch to a bed that moves up and down. Core XY our not doesn’t matter but it should use rails instead of rods. I want to dismantle my old lulzbot TAZ 5 and rebuild it like this. Not sure on the exact design I’ll use yet. I may wait to see what the Prusa XL looks like. But there are plenty of usable designs.

If there is one feature I would say is most critical I would say it’s a bed level probe like the BLTouch. As long as it’s is accurate. 100% worth the time and money to implement.

I second the BLtouch (or bltouch clone). I’ve been through them all … IR sensors, inductive, etc and they all had various issues except my touch clone.

for cantilevered bed designs, I agree. when a bed is fully supported, they add additional cost without any additional benefit.

Thanks for the feedback. I did see the thread Jeff started, and there is a lot of good information there.

The more I think about it, the more I think I’m looking for something I can build more of. I’ve seen several ultimaker and ultimaker clone builds where the case has been cnc’d, and that seems feasible to me. Extrusion alone for some of these is not exactly cheap.

I think if @vicious1 corexy had ever gotten off the ground I’d expect it to rely on milled parts and probably build that. Guess I’ll chew on it for a while longer.

I’m using this differential IR sensor for Z probe on 2 home-made i3 clones and they’re working very well. Great repeatability, no moving parts, and works on a wide variety of surfaces.

I want to try the IR sensor. I have a spare BL Touch here though… I have used a clone 3D touch, and I must have gotten a broken one or something, because in the repeatability test, it was off by quite a lot. IIRC, 0.05mm or so.

I have four BL Touch v3 and one clone. The clone was very unreliable to the point of being useless. The originals are all flawless.

Yeah. I’m not sure I made that clear. I have one authentic BL touch on each of my printers, and one spare. The legit ones seem great.

I want to try the IR sensor.

My IR sensor had issues detecting certain surfaces… like for some reason it really didn’t behave reliably with my natural PEI sheet. And I would get different results for different surfaces… for example if I switched to a glass plate to do flexibles I would have to recalibrate everything. Every once in awhile one of the sender or receivers would get bumped and bend a little bit on the circuit board and it would stop detecting and the first I knew about it was when I would hear the nozzle dragging a groove through my print surface. I was using the aus3d one though.

I haven’t used a lot of different surfaces, but it seems to key in on the blank build plate (red PCB), plain glass, and blue-tape-on-glass at the same height.

I did have to solder a resistor to across a couple of pins on this one to ensure it came up in digital mode for my RAMPS setup. You can use it with a DUET board and it provides a different signal (4 bits, maybe?), which is decided at power-up time. Apparently the IR board was starting faster than the pull-up resistors on the RAMPS.

If you can swing it, something with true auto bed leveling is worth the cost.

I’m taking the plunge. I am making a GridBot.

It looks like I can print almost all the acrylic parts on my existing printer (wanhao duplicator i3, which is about 180x210mm with all the goofy mods I’ve done). I may cut some of them out on the Low Rider, but I can idly stack up the parts from the printer easily enough and then cut the parts that are giving me trouble. The big parts of the electronics case won’t fit, but they are easy to cut from 1/4" ply, I assume.

IDK about auto changing heads, but it sounds cool. Endstops, I can go either way.

Even if you released v2.5 today, I think I would still print v2, just because it has had a lot of mileage. I’m assuming updating it to v2.5 would be using mostly the same parts, so maybe in the future.

I think I have most of the shopping sorted out. On the bed though, there are so many options, and I am convinced it is the most important part of a printer (and is often overlooked, for the flashier extruder upgrades). It looks like the CR10 bed is about the same size, so something like this would fit. I like the TH3D removable bed plate on my wanhao, so I was thinking about something like this with built in magnets. The complains in the reviews are that it doesn’t evenly heat, which will be a real pain. I really just wish there was a MK52 in 310x310 size

. Of course, there are AC beds, which seem great, and a fire hazard. Lulzbot sells a replacement bed setup for their printer which is a chunk of aluminum, a chunk of glass, and a silicone heater, and they sell it for $150. Just not sure about this one. I will probably get the CR10 one, and just assume I will hate it and want to upgrade it later.

It looks like the seckit go is now taking orders again, with a 1-2 month lead time. It looks to me like they changed the packages around a little bit, and are now charging a bit more (which is reasonable for a full kit like that).

This is the heater I have on my printer. 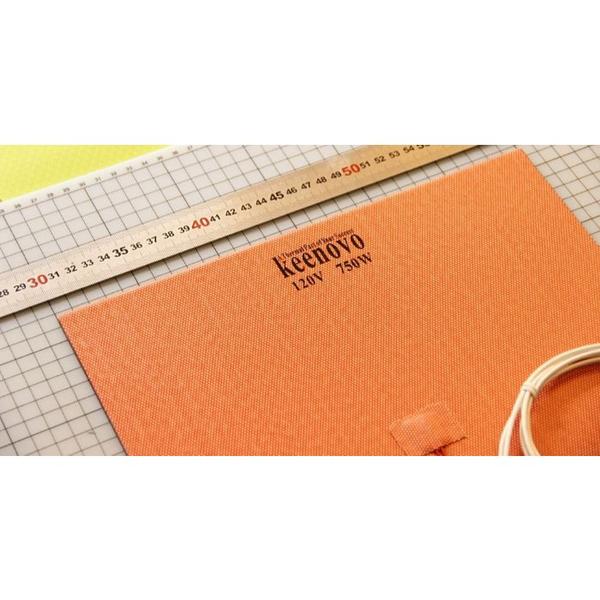 120v are in stock, ready to ship. 240v heaters are out of stock, ETA early June.  Keenovo bed heater with thermistor, plus separate thermistor for top of bed channel, wiring terminated for ZL or ZLT with proper connectors. 120v or...