Hi all, I was an early adopter of the MPCNC and later was pretty active in the early days of the ZenXY. I haven’t used my MPCNC in a few years but would now like to build a Primo. In my limited research, I’ve only seen a 1" (2.54) version of the Primo - is there a version that uses the 3/4 emt of the original MPCNC? Im not averse to buying new rails but also wouldn’t mind saving some $$ on this build if possible.

Related question - does the Primo use pretty much the same hardware as the old MPCNC? Skateboard bearings, allthread, Nema 17s, etc? Just wondering if I might be able to reuse some/most/all of the parts from my MPCNC.

Thanks for any advice!

Good day! Though I have not started on my build, I have been lurking here for a while watching and learning. Here is the link to Thingy for the “C” (C=conduit) version: Mostly Printed CNC Primo C-23.5mm MPCNC by Allted - Thingiverse

As for the other questions, I know Ryan @vicious1 used to sell an upgrade kit in the store for those that want to build a Primo from earlier versions, but it is not listed in the shop right now (unless I was looking in the wrong place). I can’t answer about all of the pieces that would cross over, but I do know that they stopped using the allthread in the Burly version and replaced it with a T8 Lead screw (200mm T8 LeadScrew and Nut – V1 Engineering Inc), and they also changed to a 10mm belt from the 6mm, so belts, pulleys, and Idlers would need to be changed out too. I would let Ryan or the others here speak to the other parts that would cross over, but those are just what I know from my reading.

From your build you could reuse the electronics/steppers. I don’t think you were using dual end stops then, were you (525)? You can still use a 4 driver board and series wires, or now you can do 5 drivers and individually wired steppers to take advantage of the squaring.

Welcome back, Karl! How are you doing? Do you still have a sand table? Is it still being ran by your nano pro?

Glad to “see” you again. I can’t believe it has been 4 years.

Hey Ryan! Long time no message! You’re correct, I wasn’t using endstops - I had been playing with them but never really incorporated them. To do 5 drivers, I’m guessing I need a new board? I don’t mind - I moved on from Ramps on all my printers and wouldn’t mind upgrading the new CNC. Do you still offer the upgrade kits that REvans mentioned?

Glad to be back - excited to get back into doing some CNC stuff!

Hey Jeff! Good to see you too! Yup, my sand table is still running with a GRBL arduino uno, being fed g-code from a Nano and SD card! My programmable LEDs have started failing, so I’m planning to do a rebuild. Besides the LEDs, I’m going to replace the controller with something with 2209s - my only complaint with the sand table is that it’s too loud (singing steppers). I have an einsy board I might throw on there, or might just get some new SKR board.

It has been a long time! I see you have remained active in the V1 world all this time! Good for you and GREAT for the community. I’ve been gone a while but it’s nice to be remembered from the old days! Hopefully I don’t embarass myself with too many stupid questions - I’ve been gone so long I’m a noob again lol.

Hey thanks for the good info - gives me an idea of some of the stuff I’ll be needing!

I guess I need to start studying the docs in depth to get more details on what will be involved.

The upgrade was from the Burly to Primo, so it would not have worked. If you have a good hardware store near by that could solve the hardware part, I am not sure what version you are coming in from but you probably need mostly all the nuts and bolts, and idlers, pulleys, and belts. If you dig in a bit and get a list I can see what I can do about putting together a custom kit for you. Or maybe do it the other way see what you don’t need from the primo hardware bundle.

A ramps would work great if you add a driver, it does everything you need.

Thanks for the offer Ryan, but no need to do any custom effort just for me. I’ll study the docs and start gathering anything I don’t already have. Got a bit of printing to do anyway.

The docs mention approx times for printing with .5 and .4 nozzles. Any thoughts on printing with a .8 nozzle? I expect to need to drill out screw holes regardless of nozzle size - any other gotchas?

Not sure. It does look like you might want to use the new Prusaslicer alpha or cura to take advantage of the arachne process to vary your extrusion width. That seems to really help with parts like mine.

I am set to experiment with it myself in a day or two.

It makes the point that Arachne tends to round the inside of concave corners - something that the .8 nozzle will also do. Are there any parts in the Primo build where that might be an issue? Places where it would be important to have sharp inside corners?

One other question - I’m getting ready to start printing with the .8 nozzle. Are there any parts that you would suggest as being a good choice for testing dimensional accuracy to start with?

Hmm, good point. I didn’t think much of that but I would say any vertical m5 nut holes would be the biggest issue…but I think I have them all tapered so it might actually make them better.

Typed all that out and took a look, there are no vertical M5 holes.

I think you will be okay. Most delicate part are the belt tensioners, they usually need a bit of sanding to get to fit loose anyway. Maybe start there?

Just took a look at that part (belt tensioner). Ima print that with a .4 nozzle, I think. But the corner tops, where I think the tensioners are fitted into, are good candidates for first prints, since interior openings are the most likely to be too small. I’ll start with one of them (and I’ll print a tensioner to test fit.

Thanks for the tips!

Just thought I’d mention that I first tried slicing one of the leg tops with the current prusaslicer. It had holes in the thin parts between the screw holes and the tensioner hole. I tried a number of different settings, including line width, thin walls, layer height - nothing fixed it. I then switched to the alpha version and it sliced quite nicely. I didn’t mess with the Arachne settings, just went with the default. Printing now.

I didn’t mess with the Arachne settings, just went with the default. Printing now.

The alpha build has Arachne on by default, I think. I saw comments with people arguing it should not be the default at least.

Oh yes, it’s on by default. I just meant I didn’t mess with any of the Arachne defaults - there are 8 of them on the advanced print settings tab. 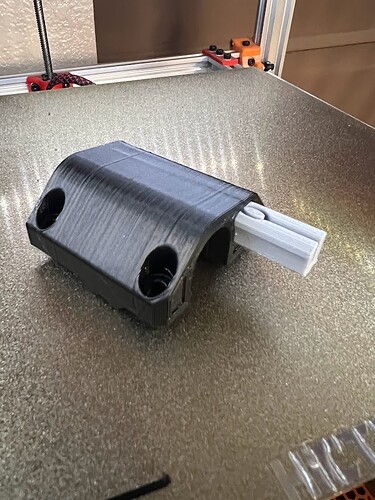 I’ll go for higher infill on the trucks and z parts. This one I sliced and started printing before noticing the low infill, but 3 perimeters of 0.95 is pretty strong, I bet. Printed in PETG.

@karltinsly I printed my Primo J parts with a 0.8mm nozzle and didn’t notice any major functional issues. It really cuts the print time down. They weren’t as pretty as some of the other parts I’ve seen on the forum but they work. Best of luck!

Thanks, @Gato! I figured I wasn’t the first to try a bigger nozzle for added strength and to cut down print time. Glad to know you didn’t have any major issues. I haven’t noticed anything worrisome so far. Of course, with functional prints, it all about how everything fits, so we’ll see when it comes time to put it all together!