I have been working on a new build that doesn’t involve stepper motors (gasp).

Some of you may know I like mechanical keyboards I use Home Assistant for organizing my IoT interfaces and automation. I have a lot of odds and ends for rapsberry pi build around too.

So I decided to start a project and I wasn’t sure I would finish. I DM’ed Ryan and he gave me some good advice/feedback on it and I actually “finished” it. Well, it is working well enough to get used.

Now that I have made it this far, I wish I had shared the whole thing with all of you. So I’m doing that now. 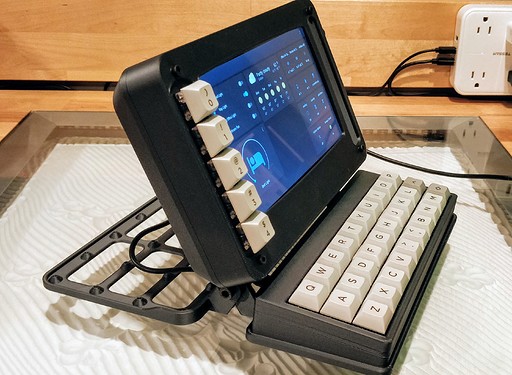 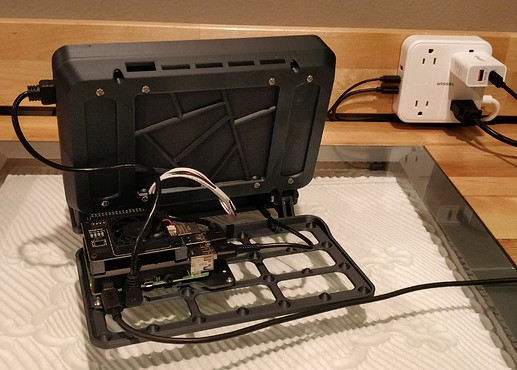 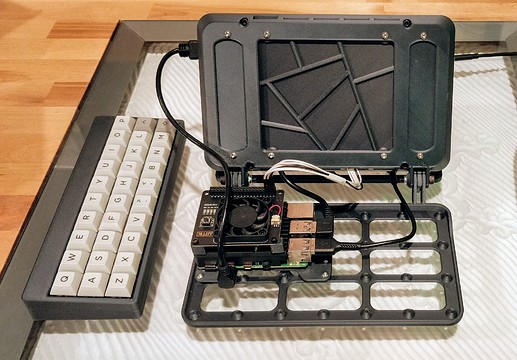 The 3x10 keyboard has a pro micro in it (well, an elite C, which is a pro micro with USBC). It is a project called void30. It is a very small keyboard. Too small for daily use, IMO, but it is very fun to build and very fun to use (for weirdos like me, as long as I’m not in a hurry). 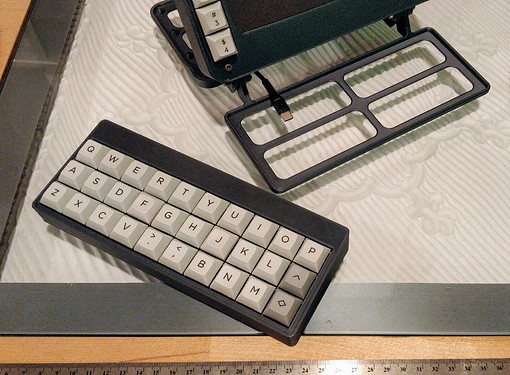 There is a little tray to hold it in place in the front. 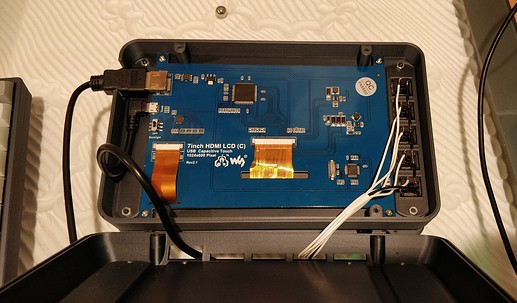 I really liked the printed parts of the void30. It uses a few screws and has a groove to keep things aligned in between the screws. I adopted that technique for the screen case.

I’m making a github repo for it and I plan on sharing everything. If you can print 220mm, it is a relatively easy thing to print.

These are some shots from the CAD process. I got stuck or needed to sound some things out and I shared these with Ryan. I wish I had shared them with everyone, but he gave me some good feedback. Thank @Ryan. 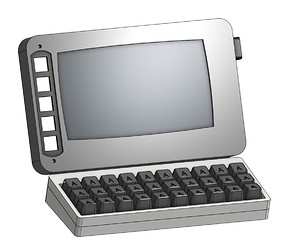 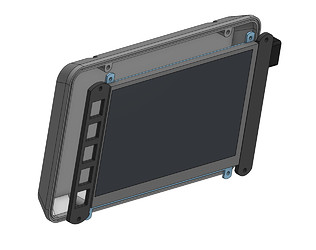 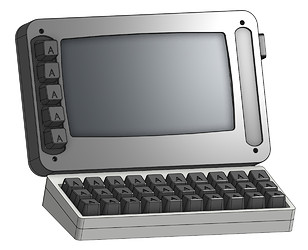 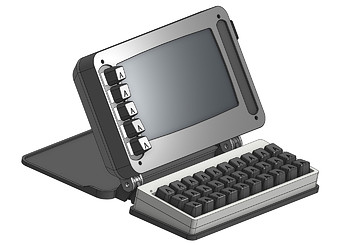 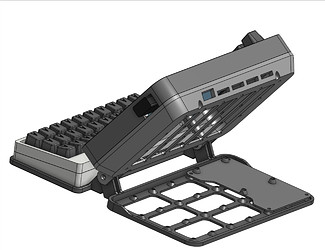 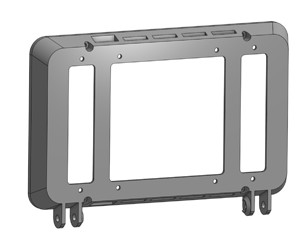 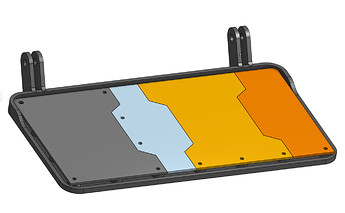 It looks so quick when you see those next to each other, but that was probably at least an hour for me in between each step. I have always struggled with CAD. But this project has made me feel pretty confident. I still have lots to learn, but I am pretty proud of it. I hope you like it.

You might be wondering, “How well does it work?” Well, I haven’t used it much. Whenever I try to, I get more ideas and try to edit it. I will let you know in like a month.

And I will have a github up with the files soon. Maybe by tomorrow, or Wednesday at the latest. I am calling it olkb-terminal because those kinds of keyboards are olkb (ortho linear key boards) and it looks to me like an old school terminal (like the ones I used to see at the airport ticket counters). 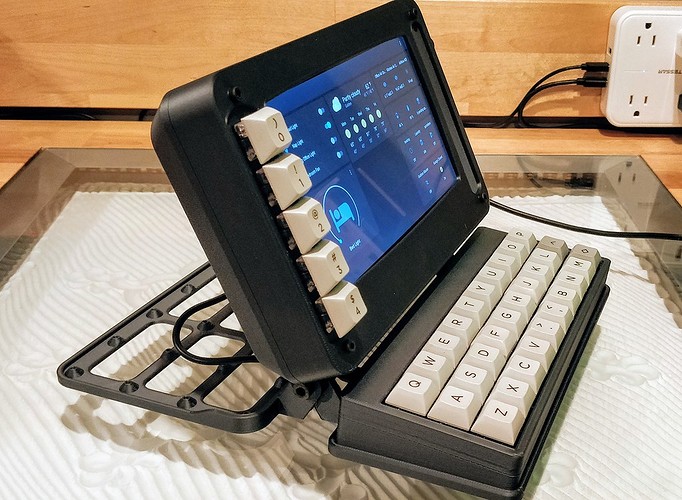 Fantastic project. Looks like you have a mastery of CAD from here, I don’t think you could convince me otherwise. I really want to build something using that color scheme in your last picture.

It will be really interesting to see if you change any of the hardware after some use.

Nice! I’ve been kicking around the idea of buying a small tablet to use for my Home Assistant setup but this seems like it could be more customizable and economical. Looking forward to seeing how it works out for you. But I am disappointed that you didn’t machine the enclosure out of wod.

I’m going to share the step files too, so you could always mill it out of wood if you like. I added a ridge to the front to make it stay together better, but it isn’t required.

I had most of the parts kicking around already. But I don’t think it would be cheaper or more useful than a dedicated chromebook. It has a nice aesthetic (to me) and it is more easily connected to electronics than a tablet.

Awesome project! Really looks good and I can tell it took a lot of time and probably some “alright i give up” moments. I’d love to dive more into RaspPi projects, but the computer science side of engineering has always plagued me. Pi projects always seem to be heavy on the coding side, but maybe I am wrong

This is actually pretty lightweight. But it depends on what you call “programming”. It is definitely Linux, so it uses text files for configuration a lot of the time and the command line is king. The Linux lifecycle of projects is:

Only the biggest projects get to step 3.

I am a software engineer. And I use Linux on my main laptop 100% of the time. I sometimes forget how much there is to learn. But I don’t consider anything I did on this project programming. Maybe the 10 lines needed to grab the button presses, but that’s pretty basic too.

I don’t consider using git/github, modifying text files, running commands on the command line programming. But whatever you call that, I would say that is necessary for this project.

Yeah. reddit too. I had to leave my phone in another room. But it is nice to get such nice comments.

It’s been posted to the cyberdeck discord too.

I had someone tell me that the dockerfile I created the other day was programming.

That’s exactly what came to mind when I saw it!

I love it and I love the way it makes me want to build one even though I have no idea what it’s used for!

OK I have a vague idea of the answers, but that leads me to two questions:

Having a keyboard without the junk on the right (60% or TKL (ten key-less)) move the mouse closer so I don’t have to reach as far maybe makes you a little faster. It helps my shoulder and wrist fatigue. That’s a benefit I gained when I bought a pok3r keyboard. But eventually it hurt my ring and pinky fingers.

The regular keyboards with staggered keys twist your hands awkwardly to reach the upper keys. They are only that shape because they needed the mechanical clearance on typewriters.

The biggest advantage of an olkb (on a grid, like the planck) is I use the right thumb for backspace and I can use the keys that used to be part of the spacebar for things like ctrl, alt. And I don’t have to use my weak pinkies for that. I use a nyquist from keeb.io on my desk this way. It is also split so my shoulders are more relaxed. I also enjoy my iris also by keeb.io for the same reasons.

There are a bunch of keys that I need to type that aren’t on primary keys anymore. Sort of the way the = is typed with shift+’+’ on a regular keyboard. These smaller keyboards need extra shift keys that they call layers. I have to hit Raise+H to type a = on my keyboard. I don’t think that makes it any faster, but I don’t have to reach to the + position and I don’t have to reach past that to get to the backspace or past that much farther to get my mouse.

This keyboard is much smaller 3x10. I doubt I would be able to use this for programming comfortably. I bet I could do it with maybe 3-5 days of practice. But I doubt I would like it as much as my nyquist.

I have never tried dvorak. I can still comfortably use my laptop keyboard without thinking about it. I imagine it would mess with my mind to use dvorak and take much longer to learn than the keyboard layers I use for my keyboard.

That’s the path that worked for me. Other people like moar keys on something like an ergodox. Or 3D sculpted ergonomics on a dactyl manuform.

The best keyboard I ever had for typing was the old white Microsoft Natural keyboard that was only ever made in PS/2… Can’t even find the things used anymore.

These days I’m using the older microsoft natural keyboard. For me they just seem to fit.

I did go through half a dozen different keyboards until I found the ones that fit and occasionally I’ll pick up a new one just to see if it fits any better.

I do have longer fingers, so reaching the different keys are easier. I can’t live without at 10-key on a keyboard, though… punching in IP addresses is much faster for me on the 10 key than using the number bar. It comes from years working in a retail store that didn’t use scanners so I had to punch in the purchase codes for all the items bought.

I do like the idea of having more buttons for the thumbs to use. My right thumb doesn’t do anything as my left is the one hitting the space bar all the time.

With my longer fingers, I also tend to use my ring finger to hit some of the buttons most people would use their pinky for. For instance, I use my right ring finger to backspace instead of the pinky. I also use it for all the different bracket buttons.

Orthos really show you you’re not using the right fingers to type… Now that I’m not supporting computers every day I really ought to learn my split keyboard’s arrangement. I was putting it off because I’d be bouncing between layouts all the time and that just seemed silly. 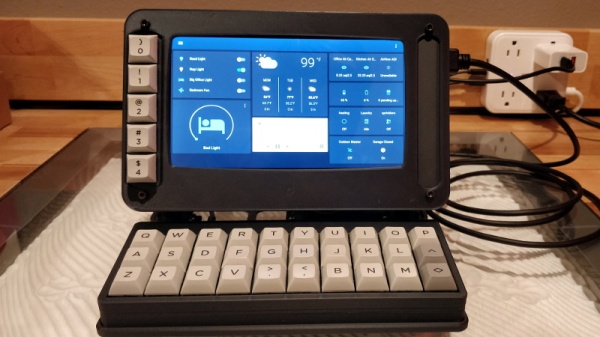 The OLKB-Terminal designed by [Jeff Eberl] doesn’t have a battery, can’t fold up (even if it seems like it could), and is only portable in the sense that you can literally pick it up an…

OMG!!! Duuude that is rad. Screen shot and frame that puppy. 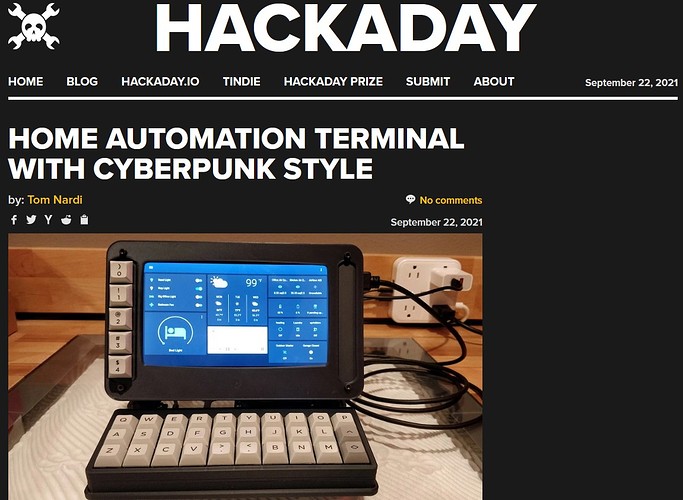 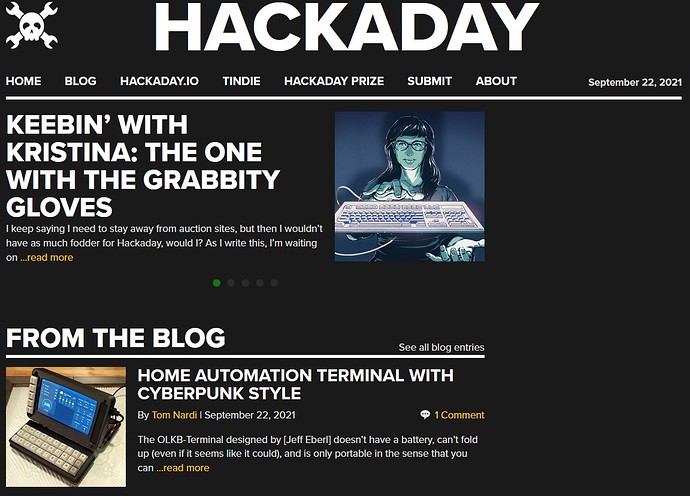 Just saying, being on the HAD homepage is fraking sweet. I hope this means there will be more adventures in hardware for you?!?

Screen shot and frame that puppy

Sounds like you’re saying a tattoo is too much?

Only if you put it across your forehead! If you want to show off, be flamboyant.