One part too big for my printer

I was a fairly early adopter to 3D printing. (I sort of backed the wrong horse by buying a first generation “UP! Personal Portable 3D Printer” which has since completely fallen out of support and uses entirely proprietary parts and software.) Despite this, I’ve never done any of the standard projects like using my current 3D printer to build a better one. After shopping around for an interesting project that I might get some use out of, I found this one and jumped at the chance.

The trusty, rust UP! started to act up, so I threw $200 at the Monoprice Select Mini. It has proved to be remarkably capable. Attached is a print of a doubled up part. But its 120x120x120 build volume is a tiny bit too small for the XYZ piece(s). I’m most of the way through printing the rest of the parts. As we speak the first monstrous XY piece is underway. I’ve got some harebrained schemes to maybe make a temporary XYZ set. (We’re talking things involving dovetails and superglue.) If any of those worked, I would use the MPCNC itself to print its own replacement. It is a plan that doesn’t fill me with confidence. Thus I wondered if, as Plan C, I could buy just that piece when the time comes to buy the hardware kit. I think in my perusal of the forum I’ve seen that question come up before, but I’ll be darned if I can find it again.

I can sell you the parts if you need them.

I think the best place to split it, if you want to try and print it, is right at the middle bearing. The spot where the 2.5" bolt goes through. It makes sense to me now, with very little coffee in me. That way the bolt would keep pressure on the seam and I don’t think there are many other forces acting on the part right there. If it doesn’t work I can get you a price.

Cool. It’ll be two or three days before I finally start my experimentation on that part, but I’ll run it by you when I do. Thanks for the quick reply, by the way.

Another thought I had, now that I’m about 90 print-hours past the point of no return. I picked the design intended for the smallest conduit diameter, with the expectation that every little bit of size reduction would increase my chances of actually getting the parts printed out of my dinky machine. Assuming I succeed in completing it, would you say the 1-inch model is a superior choice if I decide to upgrade in the future? It seems like it simplifies the purchase of pipe, at the very least.

The 1", at least in the US, Only fits on 1"OD stainless steel tubing. Costs about $6 a foot, It is better but depends on what your doing with it if it’s worth it for you. SS is more rigid and smoother.

Okay, cool. Many thanks once again. I’ll pop back in to share the results of my experiment, or to announce if/when I give in to frustration.

Just wanted to show off my first attempt. I printed with a central split, sanded on a piece of glass to get a reasonably flat glue joint, and super glued them together. If that proves insufficient, I’ll try with a dovetail, or more likely give in and pay for a print. In the mean time, I’ve ordered the bundle and some of the tools I’ll require.

Here’s an update for you. The glued part, at the very least, has held together through the assembly process. It turns out my printer makes the outer dimensions about 0.2 mm too big, so all of the holes are super tight. This meant I was literally hammering on the long bolt at one point and it still held together. But the deed is done, no worrisome cracks or snaps except for one of the feet (thanks to the corner lock tabs being oversized and hard to put into install. We’ll see how the rest of it goes. 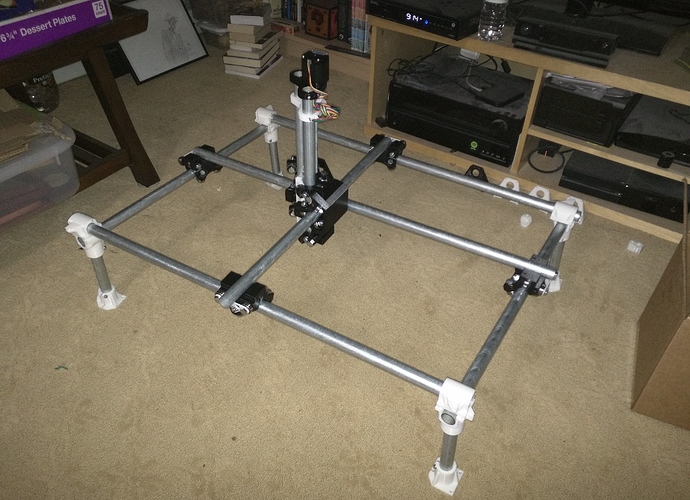 As a conclusion to this little adventure, I’ve gotten the device working well enough to print a solid version of the very piece that was too large for the printer I used to BUILD the device. So the next one I build (and I’m almost certain to build a next one) will be stronger and sturdier than the first. 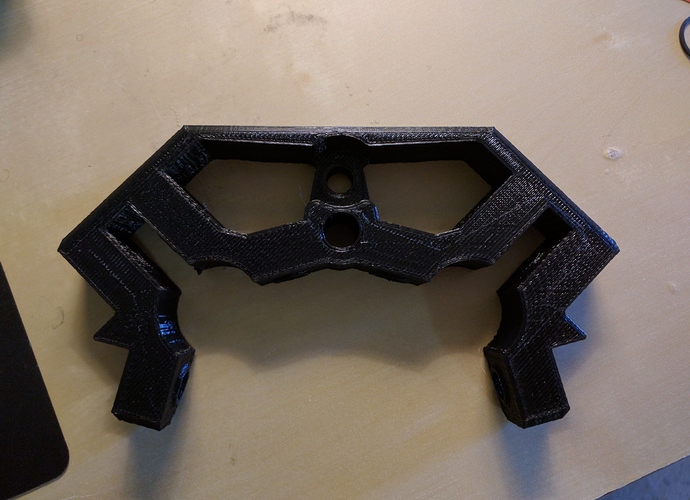 That has got to feel pretty cool, build a machine to make parts to build itself better?

Yeah! It feels kind of like I used the crowbar inside a crate to open the crate to get the crowbar.

hey Jo Lallo using the mini to make the parts how did you print the xyz part, i understand how you cut the xy part but i can only think of splitting the xyz in the middle to print it on the mp select mini???

For me, when using Cura to slice it, I just rotated it a few degrees at a time until it fit. 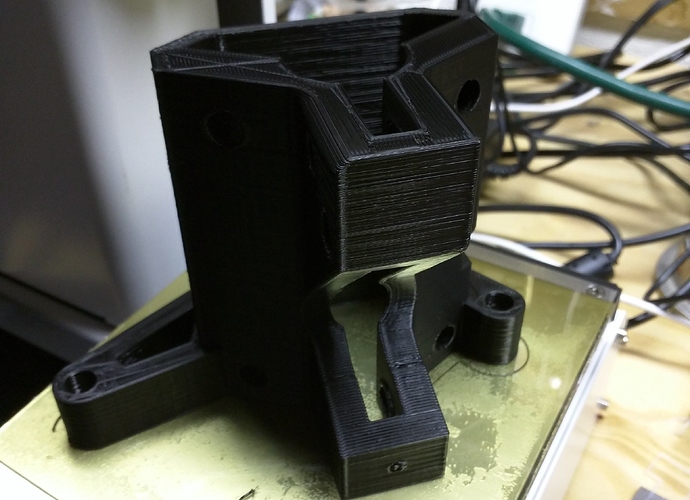 Jo Lallo what do you have your cura settings set at for the bed size ???

Don’t suppose you wanna post updated STL…
I’m having Same exact issue, I am 2 prints from having all my parts.
Much Appreciated

Here you go. I hope it works out for you.

Thank you VERY VERY MUCH

I literally just created an account so I could thank you for this. I’m in the same boat (i.e. I have a MPSM V2 w/ its limited 120^3 build volume) and I was thinking I’d need to buy this piece from somewhere else. You saved my bacon

Will post pics maybe once I get through the print. I just switched over to PETG for the first time to start making MPCNC parts so I’m wrestling w/ that at the moment

I literally just created an account so I could thank you for this. I’m in the same boat (i.e. I have a MPSM V2 w/ its limited 120^3 build volume) and I was thinking I’d need to buy this piece from somewhere else. You saved my bacon

Will post pics maybe once I get through the print. I just switched over to PETG for the first time to start making MPCNC parts so I’m wrestling w/ that at the moment

No problem. I hope it works out for you. My MPCNC with the glued parts is still going strong.