It looks like the center raised letter (batman/the joker) equal the height of the frame.

Can’t see the picture but I would assume just use two different depths of cut on each letter set. I am not sure how estlcam creates letter paths but if you did it in a different program and flatten the two layers (so you get intersecting lines) you would just need to carefully select the pocket/island depths.

Ryan, how do I change the depth on the letters. For example, I have a square that is 10mm thick. I want to pocket out 8mm, but want the letters raised only 6mm (or recessed 2mm) from the top. I swear I have it right, but the preview shows the letters at 0mm (not 2mm).

So what I would expect to see in the preview is the first 2mm of the square cut out, then the next 6mm cut around the letter.

It would be similar to this.

I’m at a lose. I must of tried 100 different ways, but I have to be screwing up the selection/tool order. I even dummied it up, and tried just a object and a square.

I think I got it

So the idea here is to have a frame as a border, and have a raised object that is lower then the border. Having the object the same height as the border I was able to do , but I could not figure out how to drop the object.

Now the task is to add 2 objects at different heights

Without a picture I have no idea. The above link doesn’t work. If your cam looks right check the preview and try it in foam first.

I think this is what your after?? Ive let Estlcam get the best of me recently so I’m glad to help if I can at all.

Brian, do you have the estlcam file you worked on? I see the gcode file, but I can’t visualize it in Repetier (unless there is a trick, in estlcam I can hit preview)

Ryan, can you see any pics I posted in the other threads or is just this one bad? If you copy the link and remove the ‘s’ from https you should see it. I can’t edit a previous post.

Removing the s doesn’t work for me. None of those links seem to work in other thread’s either.

Interesting I thought I could share the pics from google images. I guess I could attach them?

Brian, lets compare notes, attached is what I was looking to do. 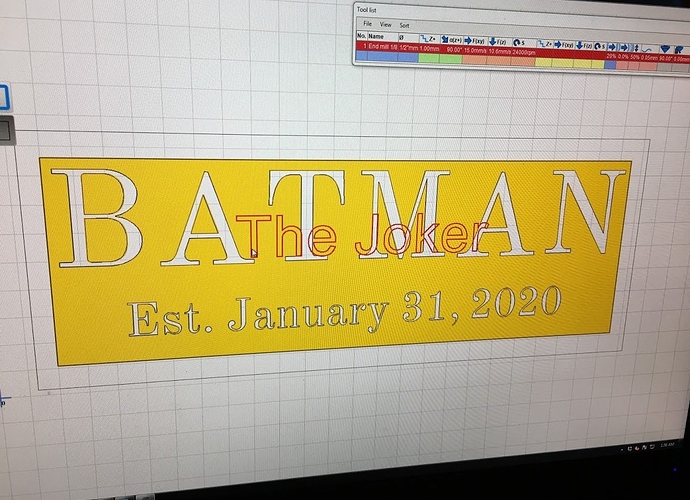 Zeenon, I checked the zipped file I attached in the previous post and the .e10 file should open with Estlcam v10. If you have 9 it wont open. Open that .e10 file and you will see the tool paths. I only did the Batman, and the Joker. Not the border. I also had to resize it because it was bigger than my machine size.

I must be losing it, i open the file in 10.010 and it’s only the line art. I hit preview and there is no objects. I do see the outline in repetier, but that doesn’t help me

Weird but let me make sure I understand you. You want raised letter correct? Not engraved into the wood. So material all around the Batman, joker, etc stays either normal material height, or slightly lower.

This is exactly the same thing I will be doing for my house sign. I’ll create this again shortly (getting ready for work now) and post it here.

Attached is a perfect example.

Ok, I was able to work on this and was able to get exactly what you want EXCEPT (there is always a but), The “Joker” in the middle did not work properly. Here is why I think it is not working. I have attached a picture but basically Estlcam is clinging to the entire letter, and not the little parts that need to be separated from the Batman. So Its eating into the joker text. I hope I’m making since. I see what you want but have no idea how to fix it. Maybe (ive never tried this) you can create a file without the joker text, then unis the INSERT option in Estlcam and it may let you choose the little parts.

A quick and dirty way to do it would be to make one dxf with the joker text, and one dxf with the batman and joker text, then do the joker pocket operation in one gcode file, and the batman and joker (make sure you don’t pocket the joker!) in a separate gcode file, then just run them back to back, without turning the machine off. I would try this in foam first, if you’re not sure you’re doing it right. This might do a bunch of ghost cutting where the first pocket was already cut, but no big deal, really.

If you did this in estlcam, I would think you would make the outside edges of joker first, then do an inside cut on the border, and then hit the island, set that depth to something. Then do an outside on the batman letters, and do an inside cut on the border, with the island again. I would think that would choose the new outsides for the island. As Brian said, you’ll have to be careful with those overlapping letters, you’ll probably have to do their outline with the manual tool.

Also, to paste in google images, you have to share them first. When they are public, you can click on them so they are in that full screen/black border view, and then right click and copy the address. It’s not 100%, but it works. I should probably just start using imgur though…

I made that folder public, can you see the picture in the first post in this thread?