Parallel vs series on your steppers

So this article, http://hackaday.com/2016/08/29/how-accurate-is-microstepping-really/, made me think about our drivers.

I need to start this saying I have never had an x or y axis power issue. This is just a cool test/explanation.

I have the means to easily test our drivers in series vs the tried and true parallel. The problem we have, and the reason I made the wiring harnesses in parallel is speed. The power advantage goes to series wiring until about 4000 steps /second, and then parallel starts to pull ahead. For us at 32nd stepping this means 20mm/s, above that and parallel is (should be) stronger.

We can very easily up this to 40mm/s by dropping down to 16th stepping. I know all the data says 16th should be stronger anyway, I can not tell a difference and opted to supply the directions and kits at 32nd stepping.

Here’s where some of you are going to not like my little experiment, the rub. To do the test I should have turned up the drivers to 1.4V for the parallel tests, but the drivers at that high of current output get way to hot to ship. So I did the tests like I would want to ship the boards, no active cooling required.

Now that that is out of the way. I chopped up a wiring harness and checked out series. I did it very scientific, almost as much as the article linked above. I put a pulley on the steppers and tried to fight the steppers with my Hercules like Kung Fu grip. Same steppers from the kit, Drv8825 driver set to .7V. I just swapped my doctored up wiring harness for the stock one. At 15mm/s series in very noticeably stronger. I tried it at 60mm/s, they still felt a little stronger. When active and idle they are still much stronger in series. explained by the .7v and not using 1.4V on the drivers.

So now what…Change everyone to 16th stepping and order new wiring harness? Leave it as is, because I have never had an issue? I didn’t expect this to be a very noticeable difference, wrong. Kinda cool that this thing just keeps getting better for no added money though right?

Easy to try yourself. Make sure you disconnect all power before unplugging a stepper, you’ve been warned. See the attached picture. 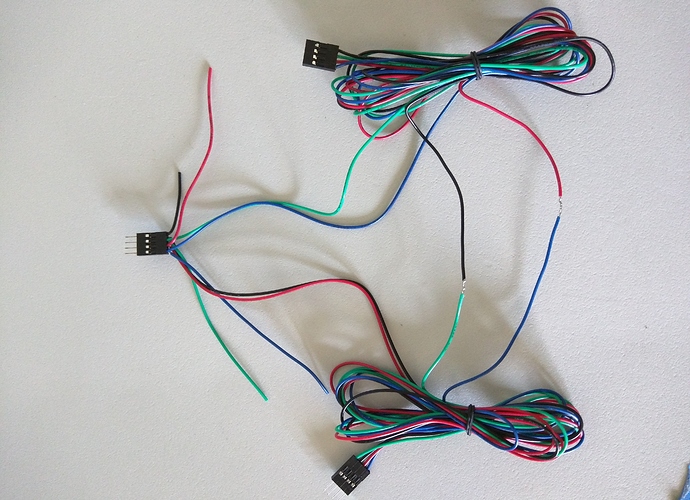 Good timing, just tore my machine apart yesterday to install my longer rails and have to modify my wiring to reach now.

One thing I found when I switched my printer to DRV’s and 32nd stepping is that apparently some RAMPS boards have traces under the step selection headers so it doesn’t matter what your jumper settings are it’s always as if you have them all installed. Not sure if you’ve checked that on the RAMPS you provide or not but might explain why you didn’t see a difference between 16 and 32 - if those boards have the hidden traces you may not have actually been changing to 16. Just something to check.

These definitely have all the jumper options, Easy to tell by how far they move.

When I first setup my machine it was in parallel. I had to crank my drivers up to 1 or 1.1 to get the whole gantry to move properly without strange binding. Then after looking around talking to some people I switched it to series. It definitely made a difference I was able to turn my drivers down to around 0.7. I could no longer cook eggs on my drivers. The motors did warm up slightly to the touch but nothing to be concerned about. I would recommend series for the large builds like mine (5’x5’)

Honestly I didn’t expect much, but man, huge difference. I need to get one set up as a printer and do some long term tests before I order a different harness or anything crazy. I have seen a few reports of missed steps on one side, but I don’t see how that can happen. From an electrical stand point series seems like it should be less susceptible to that sort of thing. But we we all know those armchair forum engineers are always right…hahahaah

Theory and reality are some times very different beasts. But from my POV switching was worth it.

So last night I wired my machine back up following my notes on how it was before I took it apart…and apparently I messed up my notes because after re-wiring all I get now is steppers juddering so something is miswired. So much for my notes, must have got something mixed up and am going to have to figure it all out manually again.

So figure I may as well give serial a go.

But I want to confirm as it’s not entirely clear from your initial post…did you switch to 16th stepping when you switched to serial? It sounds like you did but I’m not entirely sure even after re-reading that post a few times

I had messed up to the first time… It was one coil wired wrong.

I tried serial, but didn’t change the stepping. Just got stuttering. Wired in parallel, and it’s working, so I’ll wait until better destructions are available.

I left it in 32nd stepping, I use the cnc pretty slow, except printing.

@Barry, make sure your drivers weren’t up too high, which can be done in series. It is very noticeably stronger. Sounds like you had a reversed connection. All the pics out there are for a printer z axis, both moving the same way, which would cause your symptoms. We still need to reverse one.

So now, I have tried 16th stepping many times and never noticed a difference. I might just have to by a force gauge and do some better tests. Seriously might have to find smaller steppers if it gets much stronger.

I was using this wiring diagram. Could have been the power though, didn’t mess with that.
http://www.shapeoko.com/forum/viewtopic.php?p=14566#p14566

I was using this wiring diagram.

Hopefully I didn’t break anything with the site. I posted the above link without the code tags and it linked to a post on this forum! When I first added the code tags the post disappeared completely.

That is the worst pic, it always comes up. The colors are all switched. I actually can’t tell if it is correct. For example the parallel the easiest one, why are all 4 colors switched and going to different coils? if red went to red and blue to blue of the same coil and you just switch the other motor it illustrates the point easier. I have a few diagrams on here but really the real picture shows how easy it is. My take on parallel, one opposite, https://www.v1engineering.com/assembly/wiring-the-steppers/.

Way too easy to screw up. Did you see my picture of the actual harness?

The one without all the wires connected?

I thought you had to wire both pairs reversed?

This is how my parallel steppers are wired right now. 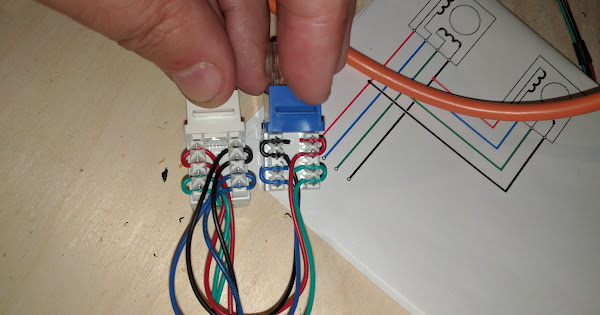 If you reverse both pairs it would be going the same direction. That’s why that picture is confusing. In my wiring page you can see that only one coil gets reverse for parallel. What you have is opposite coils wired together, and one reversed (fine, it really is no different) it is just too confusing when all steppers have different color wires for their coils.

Stepper drivers are so cheap (about $1 per driver now) that if milling is your use and you don’t have it set up as a printer I would suggest just adding two more drivers and setting them all to .75V. You do have to edit the firmware you choose to run, Repetier makes it very easy with a web interface to do it all before you even download the firmware, but Marlin wasn’t too bad once I found the right part of the stepper code I just told it everytime you set direction or pulse for X/Y do it for E0/E1 pins too.

I have the kit motors and I believe they are rated for 1.5A right? They don’t seem to be overheating at that.

If I add printing functions later I could also just add some TB6600 drivers for $8. The Diamond hotend in particular has caught my eye and adding it to MPCNC would actually be easier than with any of my other printers.

That is a possibility but totally not necessary, especially when wired in series. So much power, I really might sorce newer lower powered steppers so people don’t rip their machines apart, like people where doing when trying to put nema 23’s on here.

The problem for me is these are sold for all kinds of different reasons. I am pretty stuck/happy with ramps/marlin. I don’t see any deficiencies, it’s inexpensive and works for every use. Tons of users are very intimidated by flashing firmware. I have had two boards shipped back just so I could flash firmware for them, at their cost. I have to stick to well documented and versatile. I want to start sending the kits off configured a little different but really can’t until the mods have stood the test of time (at least a few months).

I am going to try and start adding a “how to” section, for different boards/settings, firmware, ect.

One of the things I love about MPCNC is just how comfortable I have started to become with mods. Before the MPCNC I actually hadn’t editted firmware at all - much less considered doing things like external steppers, or even switching to a Due with all external steppers just to run a different firmware (TinyG G2Core) just for different acceleration management. It has made me a lot more capable of everything from terminating cables, firmware, Arduino, laser, the technology used in most 3D printers, and before MPCNC when I heard ‘router’ it meant something entirely different. I have even started doing more modeling - recently made and printed some new legs that eliminate three connection points for just one solid printed leg (ABS at a very high infill). Even got a Filastruder so I could make things at just $2 a pound.

So your saying The MPCNC is a gateway tool? Haha awesome!