I am new to this, and “inherited” this mpcnc. The Z nut lock is cracked horizontally through the middle, and I suppose I need a new one. I can’t seem to find the file to have one made (I don’t even have a 3d printer yet!). It was built from the kit, so I assume it is the 11 mm nut. It’s the black thing in this picture:

I’ve looked on thingiverse but they have ones that people have modded. I know there is an improved middle assembly, but building a newer one seems like it’s over my head. 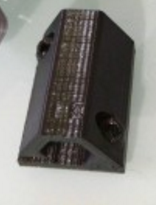 I think this is the right one. Don’t worry about the spring and anti-backlash nut. They caused more problems than they fixed. The new middle doesn’t have one.

Wow, that’s great. Thank you so much!

So I have two options:

That’s a bummer. If you cover shipping I’ll send you one.

That would be great. I will send payment and will happily pay for the part too. Are you sending the nut lock, or the nut? Just let me know how to send the money.

I printed this and built one about a year ago. I had (have?) z axis skipping issues, making it pretty much unusable. So, I put it in the garage and haven’t touched it for a while. Yesterday, I got the motivation to figure out what was going on since so many people were having success but I wasn’t. In doing so I found that I had over tightened the z nut lock and cracked/broke it. It looks like you’ve done a lot of work in the past couple months improving the whole machine, which is awesome! However, It doesn’t look like the -old- files are available anymore. Do you have them in an archive somewhere I’m just not seeing? I plan to print and upgrade the middle but really just want to get this thing working and need the old file.

Also, if anyone else has it and willing to share that would be awesome.

Okay, this one should be the 11mm one.

No problem. Download both, print the second one first, pretty sure it’s the one you need, but have the other one as a just in case.

I did end up printing both and actually did have the 13mm nut.

Unfortunately, when I put it back and it tested it it was still skipping z steps. And…then I tightened it a bit more and cracked it again.

So, I just kicked off printing the parts for the new middle. This new design looks very solid and I’m excited to put it together and hopefully have a working machine after a year of starting this.