Amazon has a 3 in one right now, pilot arc plasma, stick and tig. I understand that this sort of tig welding isn’t ideal but I think I might give it a try with this machine. It is inexpensive and for the amount of times I will use it in any given year I am sure it will be good enough. The only “bad” thing I can find is its consumables are kind of proprietary and it goes through them quickly, but if I switch out the “gun” for a pen style plasma torch I hope that will help both of those. Add a foot pedal and maybe have a decent functional scrape start tig welder? 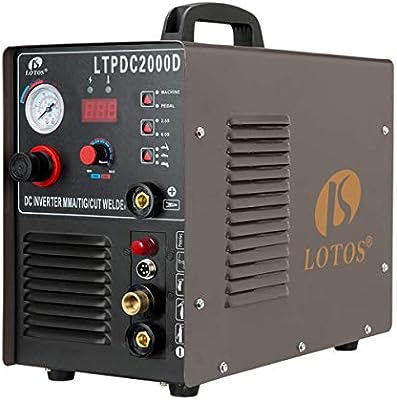 I’ve had my eye on that unit after seeing it in another thread. If only I wasn’t a college student. The plasma cutter I use at school is the biggest Lincoln Electric model you can get before making a huge step up to industrial stuff (well, as of a few years ago). It is total overkill though. The only real benefit is that it can cut 3/4" steel and the duty cycle is pretty long. The only cut that I’ve done that exceeded the duty cycle was a sign that was nearly a half hour of straight cutting. Getting that unit and switching to a different torch, even a cheap Chinese one with more common consumables, isn’t a bad idea. One thing to keep in mind is that the Hypertherm units have drag cutting so the tip can directly touch the material and not be a dead short.

No idea on what to say about the welding functionality since I have no experience in welding. I’ve tried to learn a lot online so that I might have better luck when the time comes to try it out. We just got a Square Wave TIG 200 and it is supposed to be an absolute dream to work with but the guys on the baja team stick to their trusty old Miller.

That Lotos is a decent machine as far as the China made ones go. The torch model is a EDIT: SG-55 (just some conflicting reports) and the consumables are sold in sets of EDIT: 80 pcs for ~$50. They are nickel or nickel plated, so they should last quite a bit longer. LOTOS is the brand that all of the other copycat Chinese machines are based off of, so they are at least leader of the pack. The only thing I remember hearing about them is that they are MOSFET driven and not IGBT, which isn’t optimal, but if you aren’t running it for 6+ hours every day, it shouldn’t matter… unless it puts out the blue smoke on the first few uses lol

I got a chuckle out of the “scrape start” though, never heard it called that.

The accepted industry term is scratch start. If you aren’t using a pedal, you’re doing scratch start (you strike the tungsten tip like a match to start the arc, or just like you were starting an arc for a stick welder) TIG welding, if you do have a pedal, it’s lift start (tungsten tip to the work piece with no juice and as you depress the pedal, you lift the electrode to create an arc). I believe that unit does have a connection for a foot pedal but doesn’t come with one. I’d suggest making a foot pedal so that you can do lift start if you want to learn to TIG without HF. This welding discussion is probably better served in a different topic on the forum though because there is a ton of stuff you can do with these cheap welders. I added an adjustable frequency PWM flip-flop circuit to mine almost immediately after I got it so that I could weld copper.

Hypertherm is a great company and they have excellent support. The trade off is that you pay for it. We use ESAB at work, and they are also top notch.

Square wave A/C is the real deal. Also not available on most budget machines like what we usually discuss here

Will you guys have a look at my post here and let me know your thoughts on shielding? (Cables/Arduino/ramps/laptop)

Thanks so much! I sure do appreciate any help!

I’m about to to start assembling my mpcnc plasma, and I think I have most everything worked out except a cam program to post process the files, which it seems like sheet cam is the best option. Maybe some of you guys who have completed a set up or are more used to using a plasma can help me out. I’m using a lotos ltp5000d plasma, with pilot arc.

Unfortunately I can barely muddle my way through programming the ramps board, so this is all a learning experience.

I know this is an old thread, but since I have a similar proble, maybe the OP has some feedback now.

I tried to plasma cut with the MPCNC yesterday for the first time: the arduino blew up right after firing the torch for the first cut.

@Marc A : did you finally manage to find a working solution? How did you do?

A plasma cutter puts out some strong electro magnetic (EM) noise. You may need to shield your electronics from the EM. You should put your RAMPS in a metal case and ground it. I also suggest some shielded wires to your steppers and bond the shielding to the grounded case. It would hurt to run all the wires from the outside your enclosure through a ferrite core to take care of any voltage spikes coming down the wires.

Just ran the first plasma cut test on my machine using a Hypertherm Powermax 1650 and haven’t had any electrical issues so far. I assume this is because it’s not a high frequency plasma?

BTW just want to thank Mark A for your reply about controlling the start/stop, we were a bit lost on how to do that before! 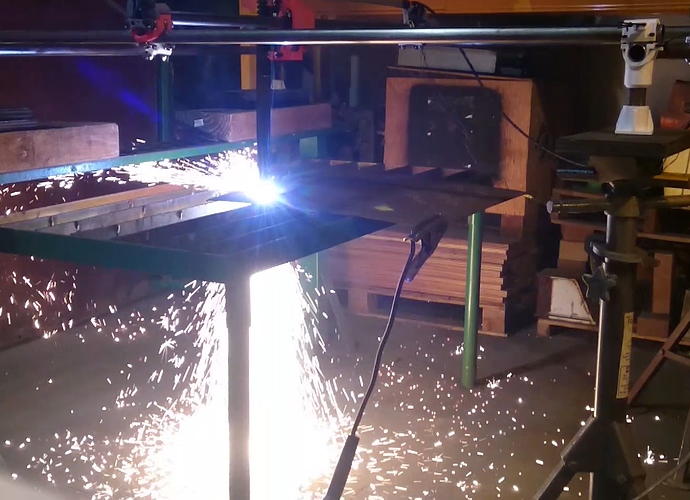 My first CNC was the Torchmate 2x4 with Hypertherm torch and manual Z height controller.

Second one was OPen builds machine and used a z height controller from Poland. The pole one was OK but if I had to do it again I would have spent the extra hundred dollars for the stand alone z height controller. it is triggered by the arc voltage and doesnt depend on the board for managing the z movement.

I would also strongly suggest Mach3 for plasma. The gcode cam software for plasma doesnt play well with some of the arduinos for some reason.

Are you sure the Arduino is damaged?
Tried restarting?
PC reboot?
Surely follow Dave guidelines.

Works for me with a cheap tig plasma cutter.

Who’s got a thread on Plasma? I have a Lincoln Plasma 20 which I know is cheap cheap … low duty, etc… but for cutting small parts or objects out of sheet metal it does great… would be cool to harness MPCNC precious with my plasma cutter.

Hi I found this topic to be interesting. I was researching a DIY plasma cutter build before i found the MPCNC and hackaday had a post on how to use toslink fiber optic cables (audio) on their site I know this is an old topic.

In the event that you’re not utilizing a pedal, you’re doing scratch start (you strike the tungsten tip like a match to begin the curve, or simply like you were beginning a circular segment for a stick welder) TIG welding, in the event that you do have a pedal, it’s lift start (tungsten tip to the work piece with no juice and as you push down the pedal, you lift the anode to make a bend).