Pockets getting deeper with each cut

Sorry for the sort-of repost - I put this in the wrong forum, and when I tried to edit/move it, it seems to have disappeared.

I am building a set of pocket cuts in Estlecam. With each move to a new piece of geometry, the bit lowers by an additional 3mm - the depth of the pocket. So it cuts out the first square great, then as it slews to the next area, instead of raising up out of the workpiece, it drops down 3mm. Then as it starts cutting the next area, it drops down 3mm again. Then as it cuts the perimeter, drops an additional 3mm.

Each area on its own is good - but every time it starts carving out a new area, it lowers again. 3mm, then 6mm, then 9mm, then 12mm.

Looking at the code (which I’ve never done before, so bear with me) I think I see what’s happening:

So it’s telling to move up to Z0.5, but my guess is that it’s not giving it any time to do this – G00 is rapid positioning, right? – so when it gets that G01 to drop down to -3, it’s still sitting right around where it was. And this is the skipping I’m hearing – it trying to rapid position the Z axis then slamming it back down 3mm before it moves.

Pic attached of it going deeper with each new shape. 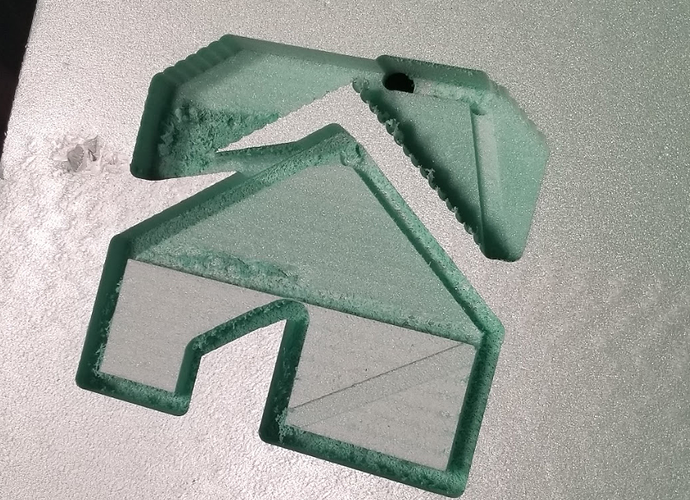 RTFM. I suspect my rapid-feed Z is not right in Estlecam. I’ve left the shop until next week but will poke at this when I get back.

It will wait for G0.

That gcode is going up and then right back down though.

Does the preview show it deeper? If not, then it’s skipping steps trying to lift (probably because ir needs speeds on Z).

It was the rapid feed z speed not set right. I went back to work to play with it, and this resolved it. I think it was defaulting so fast it didn’t actually move up, just shuddered, then went back down.

It was the rapid feed z speed not set right. I went back to work to play with it, and this resolved it. I think it was defaulting so fast it didn’t actually move up, just shuddered, then went back down.

It will use the last feedrate it was set to, which sometimes is a X/Y movement speed, usually waaay too fast.