Thanks!!
I’ll check around then.

Too bad, really.
I have an uno sitting around that I was using to control an xy plotter. Was planning to use that as my sand bot 'til I read about Rob’s design. (right side of picture).
And a bunch of esp8266 controlling a servo, leds, oled display, other sensors … that I’m using with HomeAssistant on a Raspberry Pi. (top of picture).
The 3D printed parts for Rob’s design are in the photo too (left side of picture). 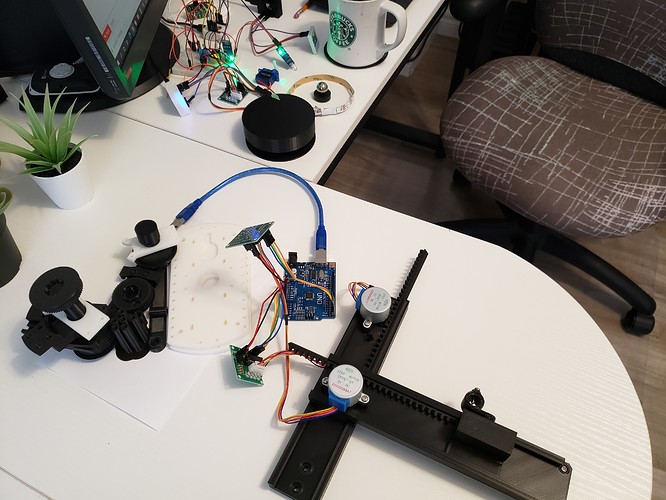 So, if I don’t care about speed OR if I hardcode an image, are you saying that the esp8266 just won’t cut it?

Hello Antonio,
I uploaded the .stl files that I made mods to. They fit Rob’s 400mm sand machine RD file mods for idler and hall effect sensors

Got 'em. Thanks very much!!

Can you tell me about your hardware set up?
ESP32, stepper drivers …

Have you seen the board Mike is cooking up?

GRBL and TFT screens (and some WiFi too) GRBL

OK…got a bit further, I have got a ESP32 Devkit V1 (DOIT) running now on my cantilever laser board. [IMG_20210213_204139] I can connect to it over wifi fine but I am still awaiting a tf card holder so I cannot check the file upload option just yet but I can control the board from GRBL_WEBUI in my browser. Jogging works fine, as does the command line but I can’t seem to get the override panel to work. I also have a MKS TFT24 connected to the ESP32 and can issue commands from there ok except th…

My progress, I started to make the housing but wanted to test sand materials. This is the chinchilla dust bath from pet store. I like the results. It is a little messy.
I am using plexiglass and the static may be an issue on the top cover. 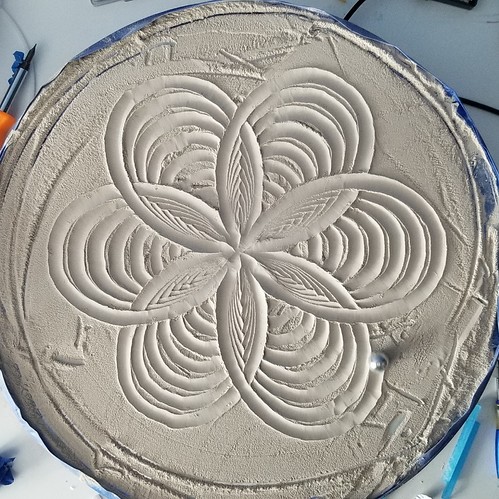 I added vibration dampers to the steppers, Made a big difference. Waiting for silent drivers to help more.
Mods to the magnet to reduce drag. It works well . Less drag noise. But the sand crunch is still there. I’m thinking of covering with bed with fabric as read in prior posts.

The detail inside the overlapping curves is very cool. Nice work.

Thanks, I spent the effort and “shimmed” the play out of the printed parts and belts tight.
I’m pleased with everything so far.
Thank you Jeff for your efforts and guidance. It took a bit of figuring to use your code to convert gcode. But I got it. And works great!

That belt tensioner looks interesting.
Can you send me a link to that part so I can also print that one for my machine?
Thanks

Thanks for checking in and you help!
I added a few mods in my github, readme has some details.

Any chance to see soon a scara output in Sandify?
If yes is it possible to add a paramètre for home offset? In your transformation code, I add a home offset of 1.5 and -1.5 to have the home with ball centre…?

Thanks for your work!

It will probably be in the next release, but I honestly take my time with those. I am not sure how soon it will happen.

Why not just add that to the pre gcode:

Just signed up to say hello! I’ve wanted to build a Theta type sand printer for awhile. I have parts on order for a square one first.

So, is there any open source firmware that can take Theta Rho files instead of gcode> I’m pretty sure Sisyphus is closed source on the firmware.

PS, I’ve run Marlind an GRBL on an ESP32. Love accessing via my cell phone with the Web interface.

Sandify.org can import thr and export XY gcode. We use it on the zenxy (and a new version is in beta).