I thought this might interest a lot of us.
Since layer shift is a problem, this could be a solution. Just going by the video it very impressive!
Has anyone tried this closed loop stepper motor setup? 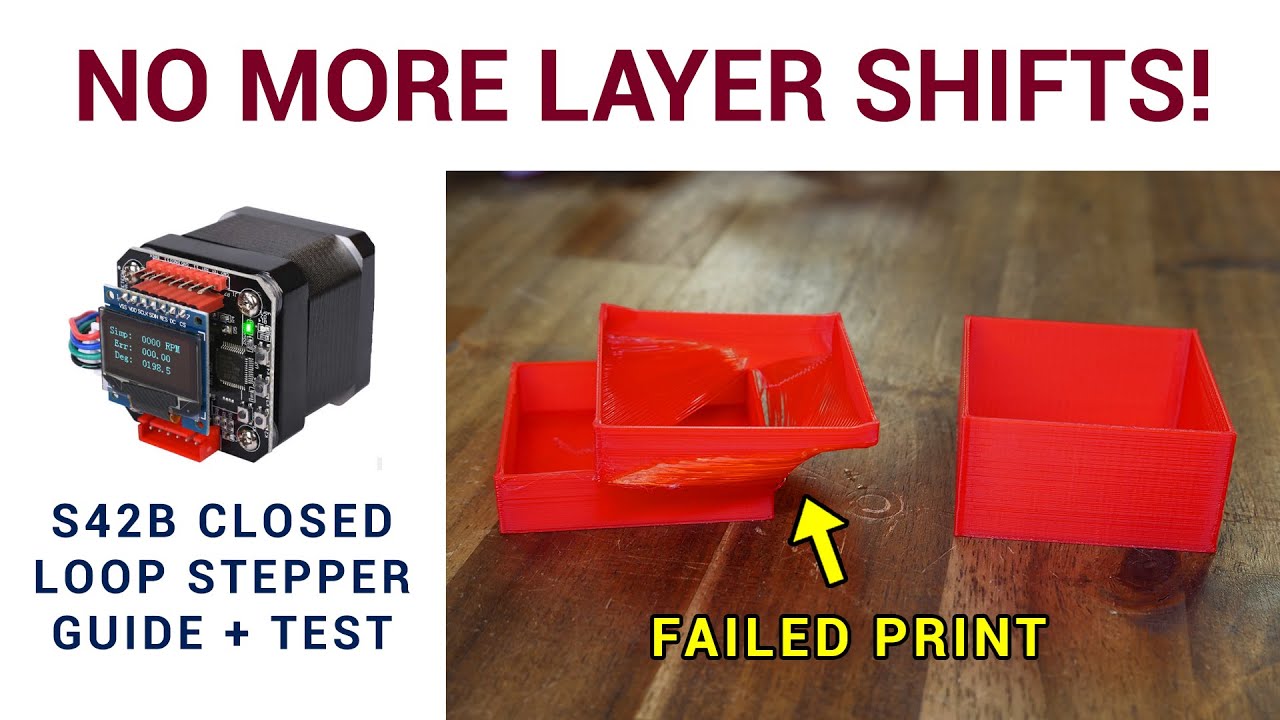 These features are possible but not necessarily implemented. We would have to test to find out.

The firmware is open source. So you might be able to make that happen.

He says at the end that you get 4x for $25. That can’t be right. Not with steppers. The description doesn’t say 4x anywhere that I can see.

Needing 20% more steps without an explanation and the same pulley is a little strange. I would also worry that the total torque may be less with this other driver, but that is probably eclipsed by closed loop. We need high torque mostly for the moment when we might skip steps. If we noticed and fixed it when we did skip steps, we could manage with less torque over all.

I do not think the metaphor he uses of walking blind is appropriate though. Since steppers work more like gears counting teeth than a blindfolded person walking in free space.

In general, I love a good software solution. This seems like it would make the machine more tolerant to mistakes. When I was starting I would get skipped steps and it was very frustrating. I don’t have problems like that anymore.

Interesting, but I don’t think I’ve ever had a layer shift on my printer that wasn’t from the print bed moving.
For the cnc, I wonder if it’s even a good idea. Difference is that the stepper is connected to the workpiece via belts, tube, spindle, endmill. That makes the endmill the weak spot. And if it isn’t, then aren’t we skipping steps because the endmill has gotten dull or the cam is bad? I’ve had bad cam make me miss steps and then on the next pass it takes so much force it actually moves the workpiece under my clamps…no fix for that.
I guess I’m just asking for a scenario in which these save the day. Hidden knot in the wood?

While I love the idea of closed loop, this solution seems like a band aid, where you don’t have control over the overall design and have to make do. It seems like an extra point of failure, I keep thinking there must be a less complex solution, also one where every part knows what the rest is doing. But, if it’s cheap and works, why not? It’s very geeky and impressive. On the other hand, what we have is cheap and works, which error situation is it addressing?

For cnc work, if your plate hits a screw or something and is jostled while cutting, you probably still won’t be able to salvage anything, it’s only while moving freely through the air this would be practical, perhaps it would be handy for manual bit changes. Once the motors are locked in, you really don’t get the chance to move the router by gross amounts, not like in the video, more like off by a mm or so. What happens to the extruder during this, does it know everything is not OK and stop pushing plastic, wouldn’t there be a small gap? Time has moved on. It’s an impressive result, I just don’t think the example of a physical intervention is convincing. I think more work should be on the side of why did the error occur in the first place, rather than another computer on every motor to try and hide them. Or if not that, a system where the exact position is always known to the controller via sensors or hardware tracking. That way the software could have more flexibility in what to do next, or prompt the user, if you hit a screw, going back to the same exact spot and trying again, probably not a good idea, you can get into a loop, crazy robot time.

I was actually thinking these would be very useful with MPCNC. Am I wrong?

It’s definitely not going to be black and white. I think they definitely have potential, but the devil is in the details. If you are swapping stepper accuracy for the accuracy of the sensor, then it won’t be better. There is also a good argument that whatever situation got you into the place where you would have skipped steps, these will either cause something else to break, or you will still have a lot of the same issues. There are more components, which could fail, or have emi noise issues.

But you can’t ignore their potential. They really could make a big difference. It could turn a ruined job into a small thing you have to patch.

IMO, the bottom line is: They need testing. A lot of it, by people who know how to measure properly. But it’s promising.