I logged on from Mac, I note the IP address which brought a smile.

I uploaded various gcode calibration files and all were accepted and printed (still the same issue with backlash). I could move stuff round with the jog buttons. in cnc.js with no issues.

I didn’t have any issues with it so far, but will give it a better going over tomorrow when the day is fresh.

This is on a raspberry pi 4.

Jeff I was not getting anything back on the consol screen in CNCJS. I basically read that the connection was made. I unlocked it. This time around. Today I had downloaded your beta. I had been watching for it. I had issues with last one and I really was not too troubled by that either.
Todays download for raspberry pi no hotspot. Beta
Marlin v1’s 8t 16 32 recommended steppers w/end switches. Downloaded from V1.
im on an ardunio mega with a 1.4 ramps shield/board on it.
the PI is a 3-b
An added note. I do have a fully functional machine as I write this. I will work on the cncjs and maybe purfchase a pi4. it is possible that I have an issue with my pi. It is currently dropping off and saying that I am loosing the server every so many minutes. I flashed the drive 3 times today with no luck.

Spoke to soon. Am experiencing issues with:

Suspect this is due to having no internet connection as it’s on a private IP address, but I do have system dates in the future e.g.

cnc.js just crashed again whilst I was writing the last reply. 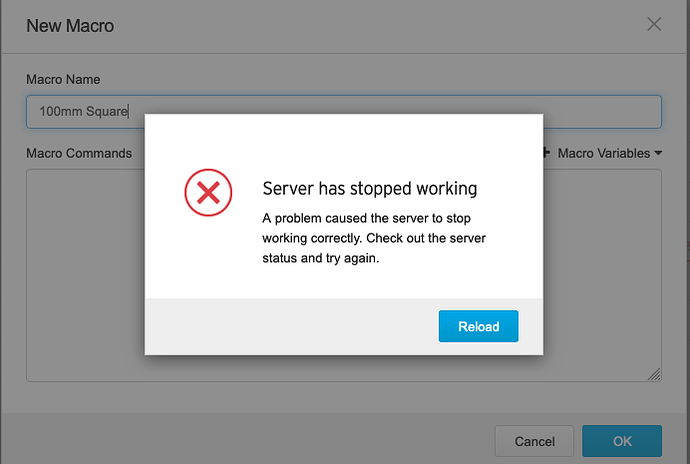 You can see the Macro I had just started to create in the background.

You can’t browse back to the server and need to restart the service.

The Pi doesn’t have a real time clock, so without internet, yeah, time will be off.

Well… technically, without an ntp service, your time will be off, or at least off from your ntp service…

Yes, it’s a pedantic nitpick, but you could run an ntp service on your own network somewhere without connecting to the internet.

I don’t think the clock should matter.

You can check to see if the process is running from the terminal with sudo service cncjs status. You can get the journalctl output with journalctl -u cncjs.service. That is showing me about the same thing on mine, but mine is working fine.

I think that error message in the website doesn’t mean it has any good indication that something is wrong, just that the communication between the cnc.js process and the web browser is broken. Ideally, we’d see an error message on the pi before blaming the process. It may still be a CPU or connection problem.

I haven’t tried a pi4. Maybe I should. Mine is still working since yesterday on the 3b+ in my garage.

I’ll leave the UI open for a while and see if it breaks itself.

Another thing to check is top. I tried running the hotspot version on a pi2b+ with a wifi dongle, and the dnsmasq was taking a ton of CPU. I’m not sure why. Again, the pi4 is much faster, so I doubt that’s the cause, but it might be a sign.

The point I was making (badly) about the clock was not that the date was out, but that I had a date in the future and in the past. I was expecting it to be consistently wrong.

The PI had never been connected to the Internet as it’s a wifi hotspot so was puzzled as to how dates had changed. If the date had come up three months in the past, that wouldn’t have surprised me.

I have to use the wifi hot spot as my wifi network will not reach to the garage. I live in a house built in 1832 and we have 25 inch (60cm) internal stone walls. It was built to last by the church as it was the local vicarage. This makes wifi hard work and even with a network router in the corner of the house next to the garage, I struggle to get a signal. 25" walls means even a simple hole requires specialist drilling. We are having a major house renovation later in the year and then I’ll run cat-6 to the garage and put dedicated kit in then as well as move all the servers there.

I think the issue is more than just a web browser disconnect. I’m having to restart cnc.js after this error occurs. If the browser connection was lost, I’d expect it to reconnect. I got the error shown above in my office with the raspberry PI on one end of the desk, my Macbook at the other and a Netgear router in the same room. There should be no wifi issues at all, indeed I’ve been using this wifi for the last 18 months and have probably moved a couple of TB’s with no known errors.

I was struggling to find a log file for cnc.js, I checked the normal areas in /var/log and sub directories. I then checked for any file ending in log with find but to no avail. I forgot about journalctl -u cncjs.service as I’m so used to old school UNIX. That’s my bad and I have to keep reminding myself about new stuff like systemd.

Now I do have a Raspberry pi 4, but it’s got 2GB of memory and I keep an eye on top. It looks good TBH but now I can check the logs, I’ll look more closely.

What I will try and do is bridge the two wireless wifi networks using a spare wifi router. This means I could monitor the Pi. from my office which is the furthest point away it can be

. Life is never simple. I do have 50m of armoured cat 6 cable but I’d have to drill somewhere to get it into the house and I simply don’t have a 25" drill.

Its a non stop roller coaster

Thanks to all for the help,

I got the error shown above in my office with the raspberry PI on one end of the desk, my Macbook at the other and a Netgear router in the same room. There should be no wifi issues at all,

Networking is complicated. It may not be a wifi signal strength issue but still a connection issue.

I’m having to restart cnc.js after this error occurs. If the browser connection was lost, I’d expect it to reconnect

Ok. Restart, you mean restart from the landing page? That runs sudo service cncjs restart. Seeing the status before that would be Helpful. It sounds like you know what you’re doing, so maybe we could kill it, and run it manually with the same arguments, then we wouldn’t have to worry about a log. There may be a debug cli option as well.

The networking here is fine. I used to be a Cisco/IBM certified network architect but I don’t do much now as other people do that sort of thing at work.

Anyway, the network in this case is the Raspberry PI running in AP mode and the Macbook connecting to it. The Netgear is a red herring. I can’t change much on the Macbook but will look more at the Raspberry Pi 4 and see if there is something going on. I’d love a decent log file to look at. It could be the http server that’s going awry, but I’ll get to the bottom of it.

When I restart, I have to go to the command line on the Pi and restart the service, I don’t go back to the landing page to restart it as I tend to work better on the command line. I’ve just had 2.4m x 1.2m of 18mm MDF delivered for the spoil board (it will be cut down) and that’s now leaning against the CNC table so can’t get to my PI until I get the jigsaw out and get that down to a manageable size. So thats this evenings job, then get the wifi router in bridge mode and get it out to the garage.

Ok. I just checked and mine is still running, so definitely not an issue here, unless you need to do something to encourage it to break. I was just messing with the macros and didn’t come up with any errors.

Here’s how you can run it manually (as pi, not root):

Mine prints out this:

I haven’t seen that warning before, so I’ll probably fix that, and I forgot to bump the version, so I’ll need to make a new image anyway.

Thanks for putting the v1pi together @jeffeb3!

I saw that as well. I am running stuff from node.js that was supposed to be deprecated years ago and it’s still there

Mine locks up after about 5 minutes. No keyboard or mouse movement. I’ll troubleshoot some more after work, well after I help my dad move a dresser after work…

You’re running with an X server? Which pi do you have?

Okay, so far I got it working with midori instead of chromium. Well, it doesn’t crash anyway. Have to take the whole thing out and hook it back up to the cnc.