Im thinking it has to do with the machine vibrations. When I turned the acceleration/jerk and printed around 10mm/s it got fairly decent results, but a 20mm cube shouldn’t take over an hour to print. I’m going to try and print some brackets to put some diagonal pieces of conduit to prevent it from shaking as much. With mine being a bit taller I’m sure it amplifies the vibrations.

For you it is the vibrations for sure. But I have another problem on top of it. It is the uneven finish on the most random of parts. I have no idea from what I have tested. At this point it could be anything for me, considering identical parts with same settings gave me vastly different results.

I just pulled this print off earlier, prototype for the full sheet machine. Stock firmware, 22.5"x22.5" footprint with a 6.5" usable Z (just enough for the tool mount). Stainless steel, smooth.

This was printed at 33mm/s with the mk8 extruder. The flat surface has a funky texture a little exaggerated in the pic. The knobby corners are from the slow accelerations, minimal ringing. The pattern in the picture looks like nasty ringing but that is the wrong direction, it is just how the light caught it. Meaning that texture is on all the flat sides but the sun exaggerates it. I have no idea what that texture is, I assumed it was from the galvanized coating, but this is a stainless build and it is still there.

I am happy with this print, My printers do print better though. Before you go to far down the rabbit hole. For a longer z axis I’m not sure how much better it can get.

Just to give you a baseline. When they print this good I stop tuning it. 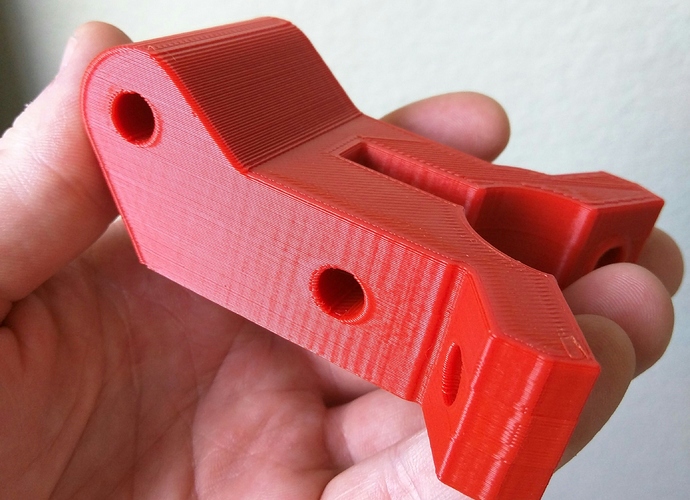 The ripples I am sort of okay with, but the bubble surface finish is still a complete mystery. I tried retensioning the belts, from loose to really tight. No difference, so I rebuilt it with retensioned xyz parts. All bearings touch but that also didn’t do anything to it. Playing around in the software seems to also be ineffective. I just don’t get how the same parts with the same settings turn out good, but then the next time not. It ruins my chances of isolating the problem with elimination, cause my results are all inconsistent.

I think at this point I might have to just deal with it, it doesn’t make the printer unusable but it’s still an annoyance

I get it is hard to help with issues like this, cause it doesn’t really make sense

Is it just thin walled parts coming out bubbly?

I would say not, as I printed a cylinder just now that was only .5mm thin about 1cm tall and it looked flawless. I have gathered up all the clues in my head and they don’t match up. I feel like it could be anything causing the issue, the extruder, software, or the machine. It has happened on numerous parts of mine, but it is best summed up in the 2nd picture I posted with the support. I know physically, that the machine is capable of nice smooth pieces, but my ability to get them seems to vary a lot our of what seems to be complete randomness.

These were printed a few hours ago. The one of the right is what I want. It is smooth, but still has the ripple effect which I am okay with for now. The left one is all messed up. The surface looks uneven with all sort of bubbles. These were printed on the same settings, which boggles my mind

That is crazy. Nothing changed in between those prints?

As far as I remember, yes. The software was for sure left the same. I am pretty much out of options, but with this luck I might as well keep printing and see what happens in the future.

Some of my MPCNC part prints I did overnight came out much better than the ones I did during the day/evening when I had the central heating going. Do you have some fans you can use the blow on the printing part to cool it own faster?

The room I print in is about 70f all the time, and I run the cooling fan that I got on eBay that I hooked up to D9

My home is about 22C when heated. 18C at night time. Such a big difference to those PLA parts.

Ahhh. Sorry to bring up an “old” thread. I got everything to work great, but this jitter issue still remains. Since then I tried different belt tensions and tension bolts. They seem to have little to no effect. I can’t tell if its something up with the way the steppers are moving, or if its a slicer thing. Around printing a bottom corner you can see it gets jittery when it prints the diameter for the conduit part. It makes this horrible jitter noise, but then on the straights it functions fine.

Here is a poor quality video of me testing the jitteryness, so the hotend is at 20c just to test movement. This is at 50mm/s (fast I know, but it does the same thing but slightly less at 30mm/s) The whole gantry jitters so its not just the z axis.

That’s either a firmware or gcode issue, almost for sure, the machine itself is fine by the look of it. Zip and upload the gcode here, I’ve got a graphic simulator that may show up errors in the gcode.

Does it have to do with microstepping? I read up on it and it seems that 1/16th microstepping is just as good and that theres no noticeable difference in quality beyond that. Also something about the arduino not being able to keep up with really fast print speeds due to its lack of cpu 8 bit power. I will upload the gcode later, doing more test prints. The main issue with it is it’s lack of neatness. I tried different filaments from temps of 190-230. No difference. I also tried retraction settings. Maybe my extruder is just inconsistent oh well. Im going to start printing the parts for my cnc build.

It could be microstepping, but I’ve not seen a machine do that sort of jittery movement at 50mm/s before and it’s usually the LCD updates that make my machine jitter - and those updates happen at 1 second intervals on Marlin which is how it shows up in the movement. Your jitter seems much faster, but also at 200 steps/mm - 50mm/s isn’t going to be any trouble with 1/32 stepping. Unless you’re using Repetier, which I noticed someone on GitHub raising an issue there that the LCD update speed is much faster now and is causing them trouble, perhaps like what you have now?

But going 1/16th steps isn’t an issue for quality, but may be noisier, my CTC came that way and produces really good prints, though now I’m using TMC2100 drivers (for X/Y only) which are still 1/16th but internally interpolated to 1/256 - so very, very smooth which means it prints even better and makes much less noise.

If you’re running the Marlin from this site, I’m still putting my money on the gcode. What was it made with?

Oh, I was also going to add that I use 230c for PLA but only on the CTC which I print at 90mm/s. That’s where I need really good cooling (and a cool room) for the parts to not look bumpy on the surface. It likes the higher temperature when going faster, but if you’re printing with the MPCNC at 30mm/s I really don’t think you need to be set so high.

Well, I got the board from here, extruder is the only non-site thing purchased. I don’t have an lcd screen and I use it through the USB hooked up to my PC using repetier. I slice with slic3r, and most if not all settings are from the recommended page. It never used to do this, or at least not as bad. I know it is physically capable of smooth circles, it’s just that sometimes on certain parts it jitters for no reason. Overall the perimeters have ripples all over them. Not deal breaking but very noticable. Probably from my conduit but it has had time to take the zinc off.

The LCD screen is a passive device (takes commands, but returns no acknowledgement) so even if you unplug it, the firmware may still be using CPU cycles telling the pins it connects to, the information to drive it. You would need to compile a new firmware that has the LCD enabling defines commented out to get those CPU cycles back. I don’t think this is the issue though.

You can see clearly from the video, the conduit is smooth enough from the linear motions and smaller circles, it appears it’s only the large inner circle (as you mentioned) that has any jittering. That’s why I suggest/I think the machine itself is fine… However, given it’s the larger circle, and knowing you’re using USB and not an SD card, it could be your baud rate not keeping up with the tiny gcode movements that make up the large circle.

Are you running at the maximum 250000 baud? Have you tried 115200 that is reported to work better on some systems? You will need to recompile and reload the new firmware to the Arduino to try this. You could also try another PC.

It is not the micro stepping. I print with several of my cnc’s all day long. with all the stock setup.

I am guessing it is your gcode. I can send you a test file. Do you have a heated bed?

Nope, I print on unheated glass with blue painters tape w/ isopropyl alchohol. I am printing the xyz parts and they seem to look fine, I guess it was that specific part or something. All perimeters aren’t that smooth, there is obvious ripples you can see that go up the Z axis, but I will live with that it doesn’t affect part accuracy that bad. Any ideas on how to print faster? What acceleration should I be starting with?