Problems with random restarting? Check this.

I was having problems with random restarts on my Arduino, and I changed out everything - wiring, steppers, the Arduino, the RAMPS, the USB cord. Turns out it was the DW660 - the bearing near the collet end failed, and it made the brushes wear quickly. At first I thought it was just the brushes - replaced the brushes, and the replacement brushes got ate very quickly. That’s when I found out the bearing was bad. Apparently when the brushes wear down the DW660 starts emitting EMI - enough to overpower the Arduino’s normal operation (USB cord being a major weak point). I only finally figured it all out by seeing some posts over on the Shapeoko forums of people having their much more expensive (but still based on an Atmel processor) electronics doing the same thing to them. Here’s a picture of one of my DW660’s old brushes on top of a replacement new one, this is with roughly 6 months of use: 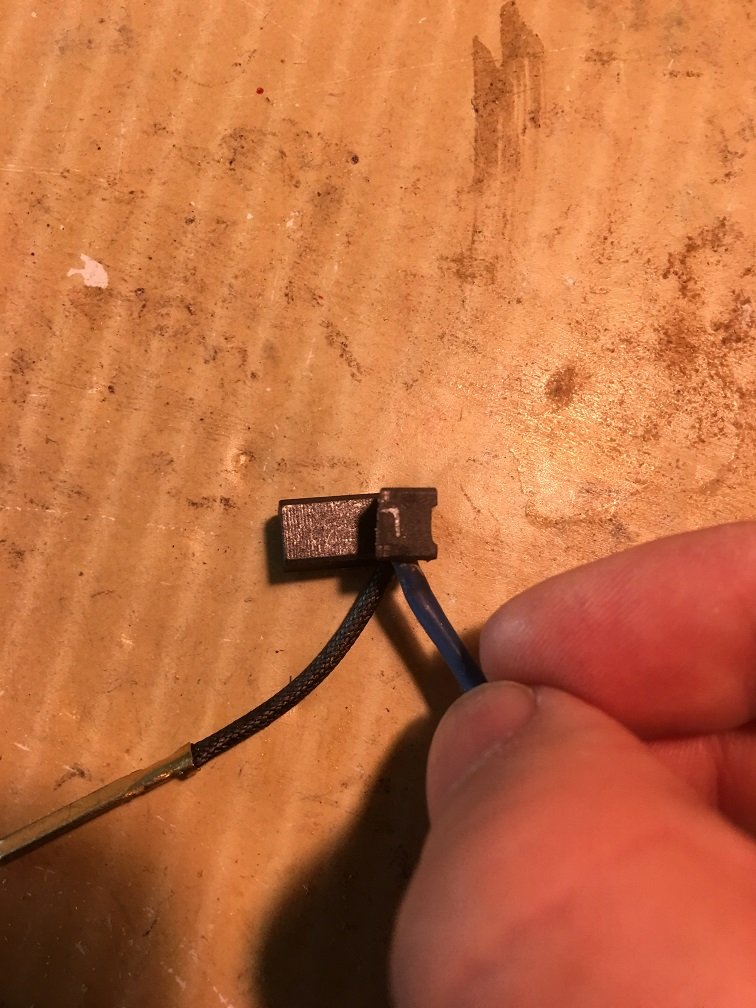 That is a tough problem to find, good catch. I’ll have to dig around those forums again. Is there any other spindles being used a lot over there or is the dewalt still the best bang for the buck?

I think it is plenty of power but I would love to get something a little more compact.

Seems like the DW660 is still being used a lot - it’s just - for most people you do NOT want to try to replace that bearing. They made it a lot harder than it is on most tools - and then seemed to put the cheapest ‘Made in China’ bearing they could find in there. So it seems right now the best thing you can do (and it’s what some Shapeoko people do) is just keep a spare around. It really pains me to have to pay $66 with tax for a whole unit when I know it’s a $1 bearing if you buy 10 from China direct (or $5 if you buy just 1 from Amazon with Prime shipping) but it seems it is very hard to get that bearing out on this particular tool. First, there’s this snap ring - I thought it was holding the bottom block to the shaft so I went to remove it- the one that holds the tool free changer on is easy to remove, but the snap ring on the bottom block is so hard it will easily break any cheap snap ring pliers, and it even seriously ate away at some big steel flat head screwdrivers I ended up using instead. Then, I got it off, got out a bearing puller - pulled that bottom block off with relative ease. Problem is - now you have this bottom block, with the bearing in the middle of it. That’s where I got stopped. Nothing would even begin to move that bearing out of there. The bottom block isn’t flat on either side, and any way you come at it when you start applying pressure to get that bearing out of there you just end up bending something on the bottom block (which is weaker than the force holding the bearing in).

I see no way of getting that bearing out of there without destroying the block in some way. I’ve searched and searched and I’ve yet to find a single person describe how they did it anywhere (just a whole lot of people saying ‘I’ll replace the bearing’ only to either never hear from them again on the subject, or a post from them saying 'Umm, I’ve changed my mind, I’m just going to buy a new one." Now I know why.) If you have a Type 3 like me (Dewalt keeps the same model number, but drastically changes the design - the first bearing I ordered cost $15 and turned out to be the wrong one because I didn’t think to check for a type number before ordering) the bearing is a R8-2RS bearing.

Personally I want to try one of those Chinese spindles - but I’m not 100% sure how to wire a VFD. It sure would be nice to have software speed control though - should extend tool life.

Update: Apparently Dewalt really just wants you to buy a new bottom block when you have to replace that bottom bearing. They even price the bottom part of the tool at $9.xx where the bearing is $8.xx and the bottom part of the tool comes with the bearing pressed into it already. It really is a no brainer to just replace that whole bottom part if your bearing goes out on your DW660. I’ve ordered it to repair my DW660 which I will use as a backup - I went ahead and switched to a DWP611 for primary use. I definitely like variable speed built INTO the tool better than the speed controller I had externally trying to control the DW660 before. Downside is having to wait until I get my 1/8 inch collet delivered to really get back to what I was doing - they include a 1/8 with the DW660 but not with the more expensive DWP611.