On my primo, i loaded up grbl mega 5x. After setting it all up, i noticed it was version d. So far, it hasn’t caused me any problems and I’m not sure that even has anything to do with this.

With that out of the way, I’m having trouble with a program. Dang thing goes along for awhile, then freezes and throws an error. I’ve scoured the gcode looking for things that aren’t right, but not only can I not find anything wrong…if I rerun the code it’ll go right past where it had the error and do it somewhere else.

First crept up on an adaptive helix at the beginning if the program, so it took me a few runs to realize it wasn’t exactly the the same place. So in the meantime, here’s what I’ve tried:
Generic fusion 360 grbl pp
Carbide create grbl pp
All the following options with each of the pps:
Mm
Inch
Allow helix
Do not allow helix
More speed
Less speed
After realizing I could cut air up to the error and cut for a while longer, and that it never errored before getting to the previous error, i thought maybe the power cord was suspect as it runs with the stepper wires and I’m using a bigger endmill (more power through the cord?). Since i put plugs in the cord to make it removable for hand work, i plugged in my spare and hung it over the side away from everything. No joy.

Same model I’ve cut (or attempted to cut) a dozen times. Several attempts in steel, including this one, finished a few in alunimum the other day. 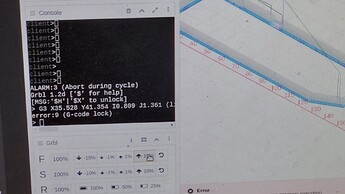 I feel his pain. Sadly for me, all my electronics kit is packed up (we’re moving).

I did have an idea that maybe it was the usb cord. I just put a new one on the laser for random and intermittent aborts, so i tried that one. Not the problem.

Guess I’ll hunt around the garage and see if i find any capacitors.

Well, sonofa…
Just found one on the floor.

Assuming the reset pin is the one marked ‘reset’ on the ramps and that the “-” next to it is adequate for ground, that ain’t it. Same problem.

edit Update. I remember reading that some folks have solved certain electrical problems by using a second circuit, so I dragged out the extension cord. That didn’t fix the problem either. Maybe I should just drag out the RAMBO? It’s got more robust features and isn’t doing anything. It just doesn’t fit nicely anywhere.

I would usually suggest trying another way to get the gcode there. Since it is grbl, you can’t use a screen. But you could try octoprint, or a different USB cable. Or a different laptop running UGS or something.

You could also try an air cut with the router off to remove that from the equation.

Air cutting is how I figured out it wasn’t the gcode. Ran thru the whole thing fine.

Do you have dust collection running? Folks have seen resets from static electricity, so grounding the vacuum/DC hose has helped. Would make sense if you didn’t run the vacuum during the air cut test.

Also, grbl supports hardware buttons for “cycle start”, “pause”, and “job cancel” button. I’m not sure which pins are used for them on the RAMPS setup (I’m running an Uno, not a 2560), but that “cancel” button might be where you need the capacitor, rather than the overall board reset (which is what I think you’re describing in your earlier post).

No dust collection. I tried with and without the router running. Only seems to happen under load, which is why I suspected the power cord.

I did run some wire to the pins assigned as pause, so maybe i can just jam my capacitor in that and try.

I finally got that cut finished, so it might be fun to try getting it cut again all in one go and compare the endmills from both. Spoiler, the first endmill didnt like it, lol.

You can try several things… Invert the logic on your input pins and use pull up resistors. This Will also give you the advantage of detecting unconnected/interrupt e wires. My limit swithes only have 2 wires. One to ground and the return signal and the connect to the nc terminals of the switch. Near de controller board (inside a metal case they connect to the controller via optocouplers. I had a very bad case of EMI because my mpcnc has a spindle and vfd. I solved it by wraping thin strips of thinfoil paper and insulating tape around the feed cable and then connecting one of the ends to ground.

I moved the capacitor to the wires i plugged in to the pause pin, and i was able to run the whole program. Last pass on the final adaptive last night, lost steps and ruined the thing. All I had was about a minute more of that and a cleanup profile. So bummed, but at least there were no grbl crashes.

Meh, just me being stupid cutting a piece of steel out dry with an uncoated endmill. I really had no right to think it would go, but I got SO damned close I thought I was gonna win!