Before anyone gets offended, I tried to buy legit smoothieboards. I understand there is some open source beef going on in the smoothie world. For me I might be able to buy a single smoothieboard but if I want to be able to offer them as a bundle option, I need a bunch of boards. I have emailed the US supplier many times over the last few months.
No Reply.

So I bought an SBase v1.3. I have no idea the difference between the v1.2 and the v1.3 I can only assume it is the quick fixes of the v1.2 added in and someone renamed it but not MKS.

Hardware-
-The board is very easy from my perspective I don’t have to assemble anything (unless you count inserting a micro SD). I don’t have to manually adjust pots.
-This would also make the power supplies easier for me to deal with.
-The full graphic LCD from the shop works (although the plugs have to be inserted the wrong way in the jacks).
-The standard stepper plugs are a bad fit, pulling the white plug housings off the board makes them fit much better.
-large heatsinks preinstalled and it looks like you can also add some to the bottoms of all the chips (drv8825 chips drain heat from the bottoms much better I have read)

Software-
-Smoothieware is easy enough to configure. I will not say it is easier than marlin, not even a little bit. It can be much more easily customized in some ways but the polish is not there like it is in marlin, and I think repetier firmware is even more polished than marlin.
-I understand that these processors are more powerful but for what we do it doesn’t matter.
-All the same settings as marlin really, no game changers in my book.
-It does have some direct settings for spindles and other external components, marlin/ramps does as well but smoothie makes it easier.

If anyone want to give it a try, I will attach my bare bones config for the MPCNC. I have not fully tested this cutting anything yet but it all works as well as the LCD.

Anyone think I am missing something?
Cool boards and software, hope to offer them as a bundle option soon.

So the SBase is a clone of Smoothieboard? Looks like a decent upgrade from the RAMPS. I plan on upgrading one of my 3D printers from RAMPS to a Smoothieboard at some point.

Not really a clone they made some changes. I think mostly for the better, but they did take off the extra power port and made the single a better connection.

I wouldn’t really call it an upgrade, looks like all the math based motion is actually a little behind marlin. Only better if you have a fast delta and need faster calculations. Other than that there is not much difference except the price.

I have been using the SBase for my MPCNC and am relatively satisfied with it… There’s some weirdness with EstlCam, but Fusion 360 has an official Smoothieware postprocessor (make sure to comment out the G28 calls if you don’t have endstops!).

Being able to create slave steppers means I didn’t have to do any fancy wiring. After having fried a couple stepper drivers in the past, I really like the ability to set the current in software.

Ok so its been a while, all winter but its sprospring now and temps mild in my workshed, but i have rebuilt me mpcnc and put it on wheels and build up a nice setup with mini network rack and cat5 punch down panel and it looks real nice.

Went to wire up everything to my ramps and ZAP!! Cooked another one. Had wire crossed on the 12v output to extruder.

So i began rounding up my megas and ramps and i quickly discovered that I HAVE AN OBSESSION WITH THE MPCNC.

None of which will come back to life.

I have read a little up on the smoothie boards, mostly in this forum and from comparing buying a new mega, new ramps and new drv8825s and then comparing that to the $65 buck for and smoothieboard that has everything in one board, has integrated sdcard reader, network port, lcd interface integrated single power connection, integrated drv8825s and several other pluses AND fusion 360 processor I think i am going to go that route.

Question: Most if my pile of dead boards is cause by the seemingly over sensitivity of the arduino ramps combo. Are these boards more OOPS forgiving as well?
mouse pointer is poised to click order…

This is the board i am looking at -

I am also looking at a SainSmart 2-in-1 3D Printer Mainboard Controller Panel for RepRap Arduino, Combination of Mega2560 R3 and Ramps 1.4. With screw terminals instead of the dupont connects , which i loathe.

Have to purchase the drv8825 seperate, but still…screw terminals!!

Which do you guys think is best?? 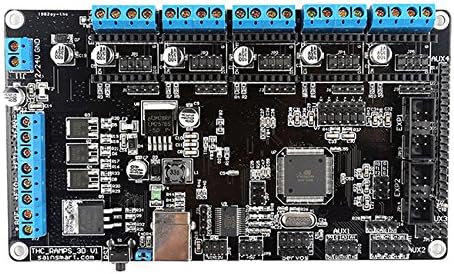 Make one mistake and you have to replace it all. Ramps you can just replace a single part.

Ok, I decided to take the tried and true method and go the cheaper router with a new cheap mega and ramps path and make sure all of my new cabling and connections are correct and then maybe this summer I will try the smoothieboard alternative.

Just have to be more careful and get my bifocals upgraded and take it slow.

Has anyone seen this (http://www.panucatt.com/Re_ARM_for_RAMPS_p/ra1768.htm﻿)? It is a drop in replacement for the Arduino Mega that the RAMPs uses. It uses the same firmware as the Smoothieboard.

I have been considering this for one of my 3D printers and as a possible “add-on” to my MPCNC.

I have one of the Re-ARM boards. I has been sitting on my shelf for weeks. I specifically got it to try with my MPCNC. I like smoothieware, and converted my 3d printer from Marlin to Smoothieware a few months ago. I seem to have less printing problems now Or I just took the time to configure smoothieware correctly instead of using the printers manufacture marlin settings.

Regarding the Re-ARM smoothieboard vs Arduino/Ramps

All I did was remove my ramps 1.4 board and plug into the Re-ARM. I lost Z control. When manually moving Z, X would move instead. When I would move X nothing would move. Y seemed to be ok.
That is about all I had time for. I will trouble shoot when I have more time.
Has anyone else tried yet?

It’s destined for my delta printer, one of these days.

well the sainsmart 2 in 1 was just totally disappointing.

I plugged it into my usb port - NO DRIVER - no standard driver. Had to hunt down the official FTDI drivers and install manually from inf files.

That gave me a ‘VIRTUAL’ USB port. Reconnected to my computer and launched the Arduino IDE. Complied Marlin firmware fine but on upload it just set there uploading until it timed out. OVER AND OVER.

So I had to hunt for hours for relevant documenation and when I did find documentation I CRINGED.

Apparently the boards, which are supposed to be new, were launched with and ancient bootloader.
This bootloader will not work with anything newer than Arduino IDE 1.0.4. The current version 1.8.4 will not work.

Attempted to compile Marlin and it refused to compiled because it did not support that OLD of a bootloader.

By that time I was furious and BOXED IT UP AND SENT IT BACK TO AMAZON FOR A REFUND. 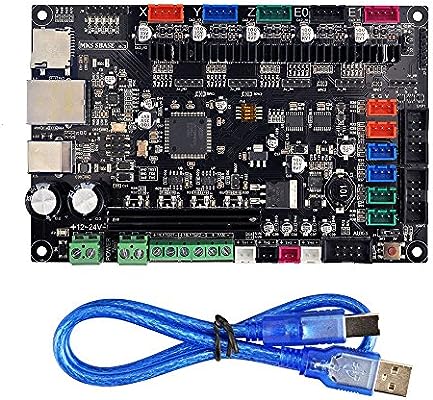 Thanks for the config.zip vicious1!!!

Will update on how good it works. 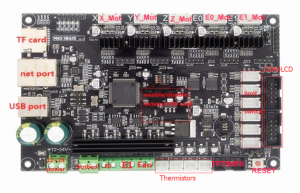 I bought the Re-Arm from Panucatt specifically for this and am in the middle of setting it up with my MPCNC I just put together. I can’t imagine it’ll be difficult, just need a bit to get up to speed with Smoothieware. I’ll try to update when I get it going over the next week or so.

I recently got my MPCNC upgraded some & had everything hooked up I thought. Turned it on & something went on the board. Think I have fried 3 mega boards over the last couple years. This is the 1st time I have fried a board on the MPCNC though. I am deciding whether to buy another mega board, a single mks base V1.5 board or something similar. In the past I have replaced the Ramps+Mega+DRV825 because I was not sure whether any of the other boards were affected. This is the board I am looking at, https://www.amazon.com/gp/product/B01FVTQQ2K/ref=ox_sc_act_title_1?ie=UTF8&psc=1&smid=A1LCDIR1SM8KTJ

One thing that I just discovered was the motor connections on the board are different from the ramps. Why did they change this connection from the Ramps when that is usually what people are upgrading from? I saw earlier in this thread that Ryan just pulled the plastic casings off the SBase board & maybe that is all I need to do.

I am also going to put a fuse in line once I do decide on a board to use & probably using this fuse idea.

I DID NOT MAKE THIS!! I like to keep things I'm printing in one location, i'm simply uploading this from another site. The creator is Erik Cederberg(https://www.youmagine.com/meduza), he gets 100% of the credit! Taken from original page: A stackable...

Yes. same here. I have a pile of ramps and arduinos.

Be sure to update us on how that works out.

James,
I went ahead & ordered the MKS Sbase board that you gave a link to on Amazon. Since Ryan has a config file for the 32bit now &you having good luck with, it seems like a good choice.

Well mine is still going strong!!

I had to change my settings back to beta steps back 200.

So the original config.txt that allted has in this thread is a good starting point.

I think youll enjoy the board. Once have everything wired up its pretty much set it and leave it.