So I have everything working, mostly. I set up a file with estlcam, linear pocketing, 8mm/s and 4mm deep. Plunge is 5mm/s, stepover on this one was 80. It appears that there was enough slack in the belt to allow it to pull the tool in when it was cutting a certain way. In the future I will probably need to use about 45% stepover to work around that. The problem with this cut though, is it seems like it list about 1 mm of z each time it started a new cutting routine. I.e. it would create the first pocket at 4mm of depth, the next pocket would be somewhat deeper, the next series of cuts would be deeper still, etc etc. Until the cleanup cuts at the end seemed to be about twice the depth as I had started out at. When the machine returned home at the end of the cut, the readout had the z as 5 mm, and it was about 1mm below z0 that I had set in the beginning.

It actually lost so much that it hit the piece during travel.

I wouldn’t think this would be an estlcam issue, since the readout seemed to think it was 5mm above zero at the finish.

For the record, I checked the z axis couplers for tightness… 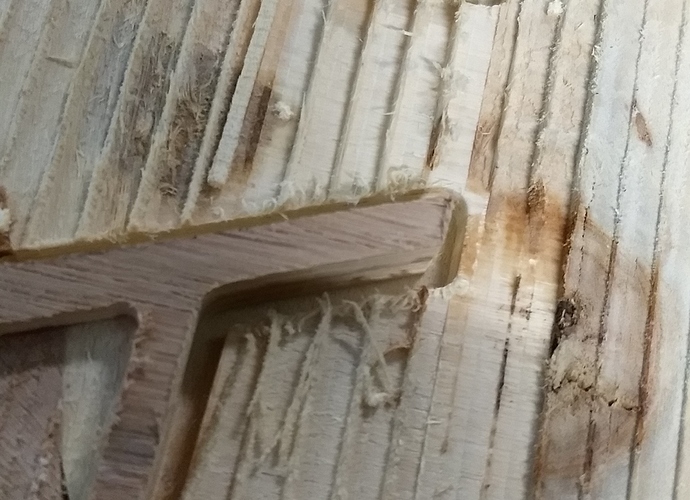 I guess to be more concise, it seems to be losing some z steps while travelling, but not while cutting.

Ok, I found this in the mpcnc forum. I’m going to give this a try and see if that helps. https://www.v1engineering.com/forum/topic/estlcam-z-movement-problem/

Does it fall on it’s own when it is powered off (Can it move freely enough to do that?)

It’s weird that it’s dropping just a little (1mm) each time. If it couldn’t lift itself and was skipping steps I would expect that it would be skipping a lot more, since there’s no reason for it to recover.

Slowing things down is always a good test (especially the Z moves). Another good test is doing an air cut, with the router off, to see if it’s something to do with the pressure from the work, or just the movement of the machine. The other benefit of the air cut is you can hear the machine better, so you can tell precisely when it messes up.

Have you done any tests of just moving the Z axis up and down, say 10mm to see if it’s doing anything funny with just those moves?

Are you certain the workpiece and the table aren’t moving? Also, the Low Rider is referenced from whatever the wheels are riding on. Are you sure they aren’t moving relative to the work? The wheels are still securely on the table, right?

Hey, I applied the fix listed in that mpcnc article, and that appears to have fixed the issue.that fix was basically “change the rapid command to g1 instead of g0”. Everything is smooth now. But yeah, the z axis collapses on its own if the motors aren’t holding it, or any time the board restarts, etc.

Make sure you have this set and you should not have to worry about rapids, also 80% is too high for anything other than foams, you should always do 45% or less, and make sure to use a finishing pass for greater accuracy if it is desired.

Deeper is better than faster.