Has anyone wired a switch to turn on the controller board rather than plugging and unplugging ?

I’ve got a 110v “mains” power switch upstream of the 19v power supply that runs my CNC shield, and the same for my 3D printer’s 12v supply. It works fine. These microcontroller boards don’t have the same kind of shutdown risks that full blown computer systems (like the Raspberry Pi) do. 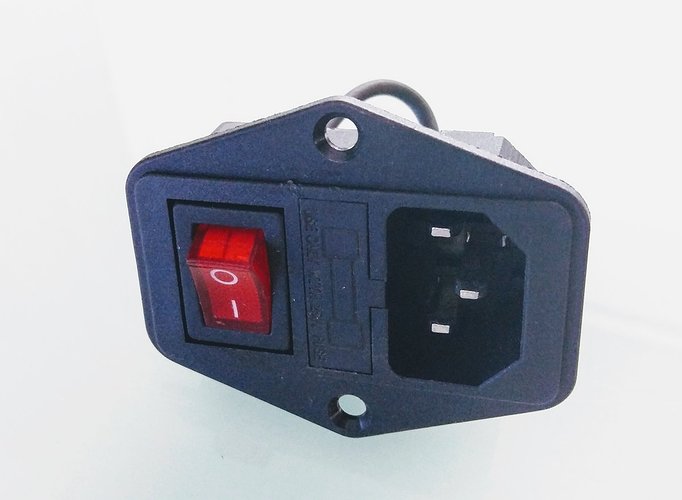 Cover your power supply and add some safety. Wiring blurb.

I use one of these…

Power and switches have been debated in several topics on this forum over the last couple of years. The consensus is that you want a solution where, with a single, easily accessible switch, you can cut power to both the control board and the router at the same time. The simplest implementation is to have a power strip mounted prominently with both the router and the power supply plugged in. Some people prefer a more traditional EMERGENCY STOP button. If the plan is to cut MAINS power with this switch, then consider purchasing one that includes an enclosure rated for MAINS power. There are a ton of them on Amazon.

Another approach is to use a pin on the control board to control a relay that controls the router. Using a bit of g-code, the relay can be turned on at the beginning of the job and off at the end. This solution means that anything that shuts down the control board will also switch the router off. Some people implement this strategy using a relay module. Here is one example. Other people use an IOT relay like this one. Using a relay to control the router gives you some extra flexibility. For example, since the emergency stop switch only has to control 12V, it is easier to do things like have multiple emergency stop switches.

My controller has a 12V switch with an led inside from an auto parts store. It is about like this:

I have it switching the 12V to the controller, but I have 12V also going to a 5V buck converter for the pi that I keep on there. That way I can reset or turn off the 12V but leave the pi running.

It isn’t a safety switch as others were talking about. It won’t stop the router.

My thought process was to have a switch that just controls the board. And then a seperate emergency cutoff switch for the router.

This is exactly what I was curious about (minus the pi) , I plan on having a seperate cutoff switch for my router.

It depends on your personality. I tend to make mistakes. Having one switch that I’ve trained myself to hit at a moments notice has saved both stock and router bits. I suggest that if you make them separate switches, that the router switch be stationary and easy to trigger. I.e., don’t depend on the switch on the router.

this is what i was going to do , I am going to have an on/off switch on the controller board that on controls that power. and an emergency stop switch (bought from v1) that is mounted to my table and only has the router on it.

What has helped me is to stop movement first fast less stock damage and bit breakage then the router. If you stop the router and not movement bits break. So my stop switch kills the steppers