I don’t know how I am supposed to use the power adapter that came in the LRV# hardware kit, or the black and red wires that came with the SKR Pro V1.1 & V1.2 board. Assistance would be greatly appreciated.

The black and red wires are geared towards an LED power supply, one of the big brick things that have a bunch of screw terminals on one side. These are more or less irrelevant for the PSU that comes with the kit.

The kit comes with a 5.5mm plug, and might come with a little female plug that has a couple of screw terminals on it. That’s meant for quick disconnect. Most of us discard that whole “trouble waiting to happen” and just cut the 5.5mm barrel plug off of the power adapter side. Inside that there are 2 wires, either red/white or red/black. Either way, red is positive (+) and the other is negative (-)

Plug in the power adapter, and the board powers up.

I have another SKR Pro that is set up almost the same on my desktop right now, but without the spade lugs crimped on.

This is great information and thank you for the reply. Would you happen to be able to provide a pic of what you have done? I think I understand, but want to be clear about the “twisting the red/black wires”. 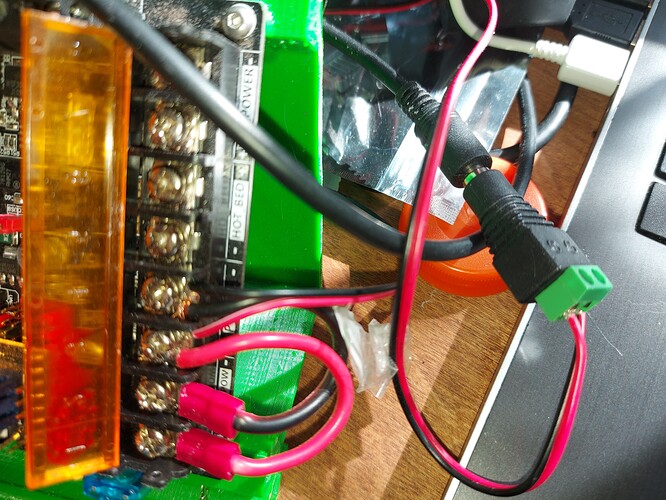 Not finished, wrapping up soon… Would this have helped you before, or, during your LowRider Build? @vicious1, please let me know if I’ve inappropriately, overly misused V1E content. Feedback appreciated, cheers! [Huge DIY CNC under $900, V1E LowRider3, FREE design, normally $10,000+] 00:00 Intro and video goals 00:48 WHAT’s a LowRider CNC for? Ans: Subtractive Manufacturing 01:30 WHY build a LowRider? 02:20 Life regrets, should’ve MPCNC 18ths ago. 02:43 Pick your own size, …

So helpful. I was actually able to get it done by the previous post and some additional research, but this video is extremely helpful!