hi guys
i have not have enough experience with wood milling and recently i was faced with some troubles. i need to mill a slot along of wood block. the slot is 4.5mm width and 6mm height.
at first look trivial task. but surprisingly it made the slot that has about 3.5mm width :(.

the slot milling in 4 movements - 2 DOC levels and 2 movements on each level. slotting on forward movement and widening it in backward movement.
it looks like when it performs slotting at first movement (moving from -X to +X) it some why shifted about 1mm to Y+. And side surface of the slot looks scraped.

my guess that happened because the bit became blunted. near to end of the job i even was saw a smoke from the tool.

so my questions:
how you guys decide that a tool became blunted? is there a way to check it before a stock became a garbage?
did you see that blunted tool makes side shifting when cut a slot?
does my parameters enough good for wood? or it can inspire overheating of the tool and as result rapid blunting?
should i use conventional milling instead of climb for wood? 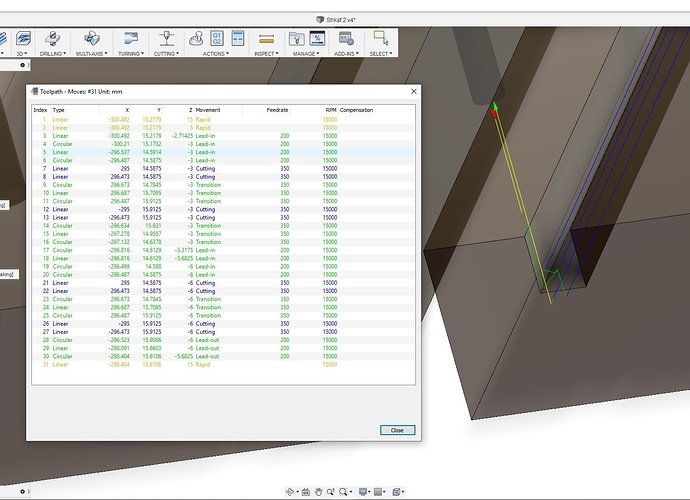 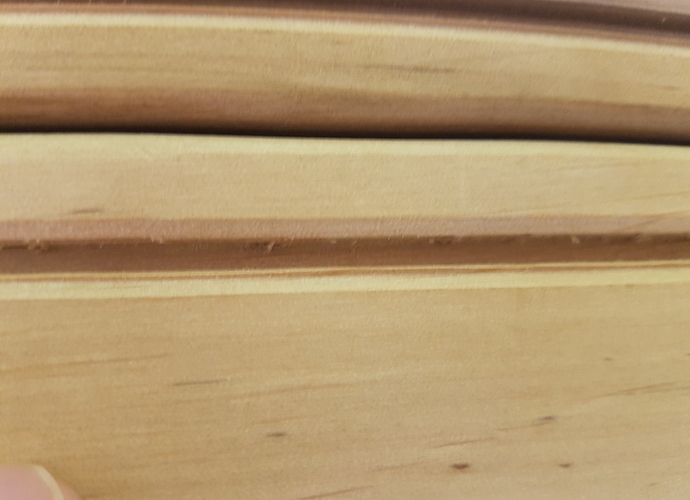 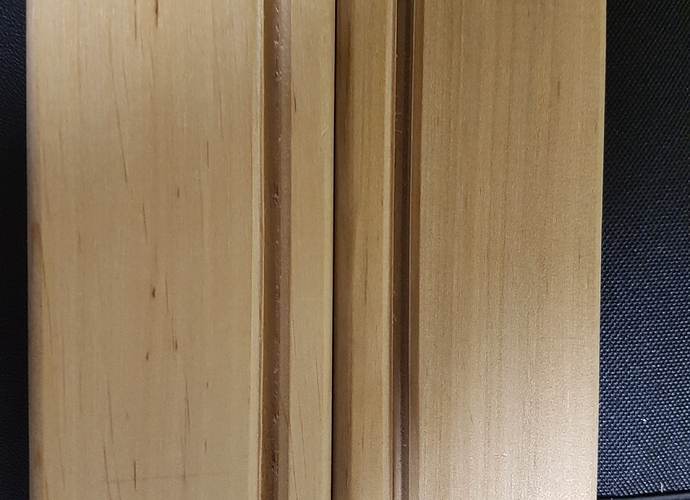 That is looking too slow for a dual flute straight cutter. I have a very hard time with straight cutters, they do not evacuate chips so they tend to make a fire real easy.

I much prefer a single flute with a finishing pass to keep it simple and get a relativity clean edge.

It’s single flute tool, as a most of my tools.

It’s just a funny and interesting fact that blunted tool shifts left side from own way with climb milling. 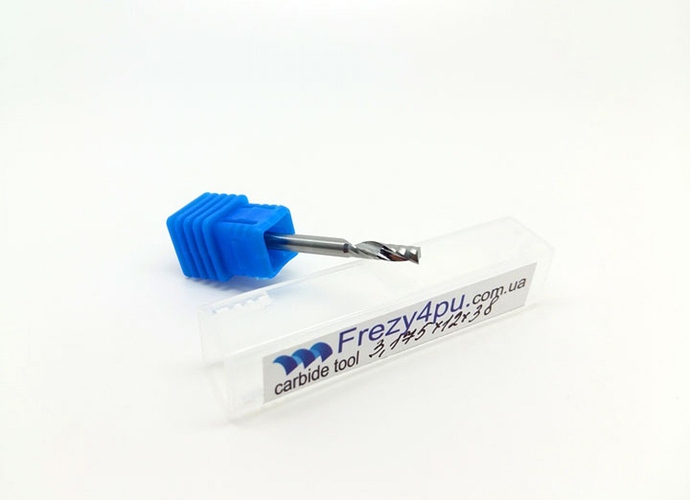 There should be no issues with what you are trying. Something loose on the build, material slip, loose pulley?

Add a full depth finishing pass, and see what the dimensions come out to, Roughing should/will always be off.

As for being dull, That tool should last at least 10 hours, sometimes way longer.

Could your spindle be spinning the wrong way? How tall/big is your machine?

It’s looks like this force increases significantly (even for full width slotting) and because our cnc not too rigid it can’t prevent shifting of the tool. Tool cuts material, but 1mm aside of expected way 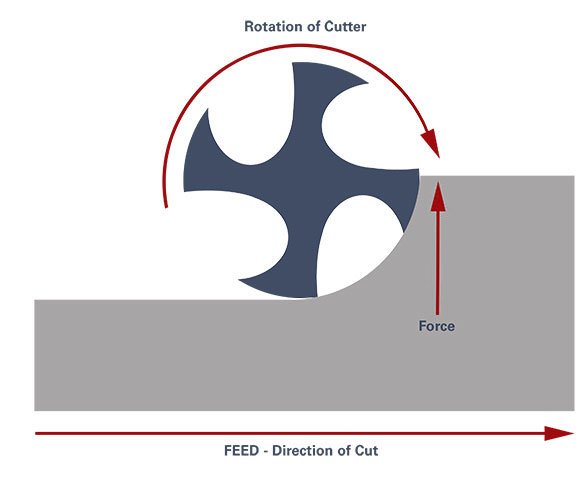 I can say is this tool had been used 10 hours or less, but this is first tool i bought and most popular in my experiments.

A found recently a few threads on russian cnc related forums. Guys talking that first sign of blunting is some smoke (for wood) and melted chips ( for plastic). Also some guys try to scrape a nails by the tool. A few guys use microscopes to check edge of the blade

I’m gonna say that’s too slow for 17000rpm. That’s a more appropriate feedrate for aluminum than it is wood. At 5mm/s, you would take a tiny cut, and just make sawdust instead of chips. That means you don’t have enough chips to absorb and carry away the heat, dulling the tool. Slower is not always better.

I’ve had the same issues before when pocketing. Alternating passes would leave some material between. So I had alot of thin slivers of wood in all my pocketing areas. I ended up checking all my Z axis bearings, found some that would not spin when Z axis moved. Tightened those up just until they started spinning again. Also my stepover was too high. I lowered about 15% and all was good.

Stepover adjustment may not help your situation, but check your Z axis bearings. My dimensional accuracy has been close, but have only checked it a couple times.

It seems the tool was a bit blunt, i was scared that something going wrong and increased rpm. In real it was about 21000, not 17000. That overheated the tool and it became fastly degrading. actually i finally killed the tool. 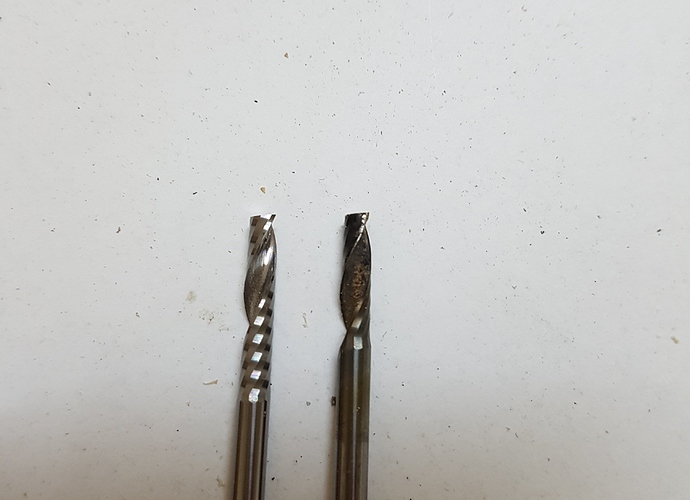 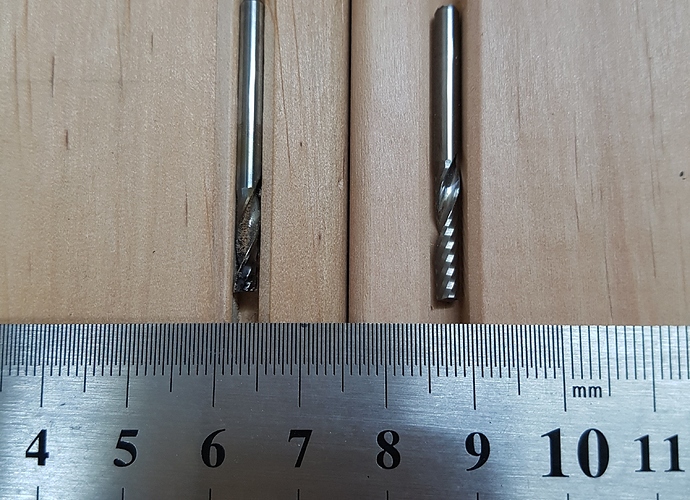