There has to be a graph out there somewhere showing the diminishing returns of wall thickness in a horizontal beam, simply supported.

I found a deflection calculator for various beam types, including round tubing. For a 48” (1.2m) tube 1 inch (25mm) diameter with a 10 lb (2.2kg) load, the resistance to deflection drops off rapidly after you go past 0.1-0.2” (2.5mm-5mm) wall thickness, or about 15% of the tube’s diameter. This makes sense since the greatest tension/compression is at the outside surface of the beam.
Link: https://www.engineering.com/calculators/beams.htm

Also a hollow tube will tend to fail by buckling, not by reaching the material yield strength. Filling can help with that a lot, even if it’s just getting the most from the steel.

I’m skeptical about stainless being significantly stiffer than plain steel. Young’s modulus is not much different according to a quick google search, unless you can cite a better source.

unless you can cite a better source.

Well, this guy did an experiment:

I bought some 1" OD stainless Steel this week, and the flex difference is pretty obvious. I didn’t setup the dial indicator but took some quick pictures. I had 6’ lengths of tubing supported on both ends and hung a 10lb weight form the center point. I took a picture from as level as I could get to illustrate the flex. The standard EMT that we/I have been using was a bit more rigid than the .0185" stainless curtain rod (too weak the bearings left a groove on the first pass). The 316l stainless…

Ok fair enough. 0.049" stainless at 1 inch is substantially better than vs 0.049" emt at 23.5, and the diameter is close enough that apparently the modulus doesnt mean as much as I thought.

4 1/2 years later we are getting some real engineering done!

Anyone have links to some sort of international EMT standards? Maybe this is when we offer the 1" EMT? Now 3D printing is not very common, lasers would hate the reduction in accelerations but it looks like we might be on the verge of some firmware fixes for that anyway.

I’m skeptical about stainless being significantly stiffer than plain steel.

It is pretty clear from Ryan’s test that stainless steel EMT of the similar wall thickness has less deflection under load. But it is crazy expensive.

Young’s Modulus be damned? No, but there is “steel” and then there’s STEEL. The stuff they use for EMT, which after all is designed to hold up wires rather than buildings, is the former variety.

“According to the World Steel Association, there are over 3,500 different grades of steel, encompassing unique physical, chemical, and environmental properties.” (Here, if you’re interested).

So, when you google Young’s Modulus for “Steel” vs “Stainless Steel” you are not likely to come away with any useful information. Of course, Google doesn’t tell you that

I imagine EMT is actually designed to bend. isn’t that part of it’s designed purpose?

Here is another (probably bad) idea. I was thinking about the way they pre-stress steel cable in concrete to allow it to handle tension. I wonder if the same thing would work here. Get a length of 1/4” (6mm) steel rope cable. Swage on a rope-end 1/4-20 (6x1.0mm) stud on each end. Get two metal caps of sufficient diameter to fit over the end of the pipe. Drill a center hole in the cap, clearance sized for the stud. Make the cable long enough that the studs extend just far enough out the ends of the pipe to get the nuts on. Run the cable through the pipe and attach nuts to the studs, tighten to pre-stress the EMT.

Might be worth a try, anyway. Though in the end I’m not sure it’s any cheaper than using stainless steel EMT

the way they pre-stress steel cable

I was just thinking of that too last night. Might set up some weird resonance with the compression load.

I have always wondered whether or not insulation foam sprayed in would help. At least dampen vibration.

But I have a 32"x32" build and it does wood superbly. I’m content with the design at the moment.

No, but there is “steel” and then there’s STEEL

Sorry this is not good enough for me. I would believe that EMT is especially low for some reason but commonplace mild steel and commonplace stainless have nearly the same modulus unless you can cite something even a little bit authoritative. I am open to being convinced.

I appreciate there are lots of types of steel but we are not talking about HSS or O1 tool steel in the hardened condition.

Also a spring that is loaded keeps the same stiffness (spring constant) as a spring that is unloaded. This is true for belts too and is why high tension does not improve stiffness. I don’t see how stressing the EMT would be an improvement. It is not weak under tension like concrete, and even then it only matters if it is loaded to failure.

I just did my own quick and dirty measurement of the flex in my stainless steel tubes.

All my stainless steel tubes are already in my MPCNC, and I did not want to disassemble it. So I placed the gantry against the Y max end stops, and at the center in the X direction. The router bit was not touching the spoil board. I mounted a clock gauge right next to the gantry, so in the center of the gantry tube that is parallel to the Y axis. 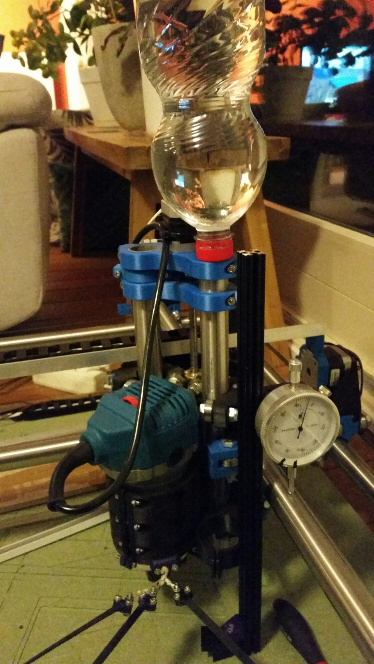 The distance between the ends of this particular tube is 950mm. The tube is 25mm O.D. with 2mm wall thickness, 304 stainless steel.

When I put the 1500g bottle on the steppers that are on the outer frame, with the clock gauge in the exact same place in the center, the stepper on the side of the gantry showed 0.020mm sag and the other stepper showed 0.040mm. A 1500g bottle on top of the Z stepper would put roughly 750g on each of the 2 steppers on the frame. So between 0.010mm and 0.020mm of the 0.080mm of sag I measured using 1.5kg of weight could be attributed to other parts of the frame sagging.

EDIT: the side with the larger sag was not firmly supported by a table, which explains the larger sag value (doh!). My final estimate still holds I think.

It is pretty clear from Ryan’s test that stainless steel EMT of the similar wall thickness has less deflection under load. But it is crazy expensive.

The EMT at my local hardware store would have been cheaper, but it was so crooked it made a banana look straight.

Even with the $95 tubes I could keep the total cost around $500 for the whole build.

I’m thinking this is a bad idea. Under the sagging stresses, the top side of the tubing is under compression and will become the failure point as the tube buckles in on itself. The internal pre-stressed cable would increase the compression and the tubing would most likely buckle sooner.

Reading through this thread it seems to me like the best two options are to slide some well fitted Woden rods into the conduit Or switch to Stainless.

I can get regular steel EMT at my local big box store for $.65 a foot. So that’s like 1/7 the cost of stainless. For some of us retired guys, that’s meaningful.

I’m thinking this is a bad idea. Under the sagging stresses, the top side of the tubing is under compression and will become the failure point as the tube buckles in on itself. The internal pre-stressed cable would increase the compression and the tubing would most likely buckle sooner.

You’re right, it is probably a bad idea, but for a different reason. I seriously doubt the steel tube will be anywhere near its failure point. I just don’t think the cable is going to reduce sag very much, as it will just stretch as the tubing sags. But I may still try it.

I may have mentioned this before (even in this post

). I’ve seen Jimmy Diresta put a long flat piece of metal under some square tube. Then he put a screw in the middle pushing up into the square tube until the square tube looked straight. As Jamie said, I bet it would respond to forces the same (similar spring constant), but the gantry would start straighter.

adding material to the center of the tube is very inefficient, especially something other than steel. that being said the best (in terms of effort, bang for buck) way to increase the stiffness of the current design is to increase wall thickness.

the best way to improve the stiffness on a future design is to increase the OD of the tube, imho. if possible, start at the beginning and determine how much deflection is acceptable (maybe easier typed then done), then you can calculate the right size tube.

I’m curious about the original test though…