I wrote a whole story…friggin thing timed out and dropped it…Long story short, thanks to Ben and Kevin for inspiring me to try this.

I wrote a whole story….friggin thing timed out and dropped it……Long story short, thanks to Ben and Kevin for inspiring me to try this.

I’m glad that it happens to you too.

It may just be a camera thing, but it doesn’t look like it stays straight when plunging. You’ve got it at 45 degrees, have you tried like 10? It looks like the middle of the bit is pushing the bit to the outside (since it’s not a drill).

I also wonder if there is a can trick to make a helical hole where you plunge before starting the carving?

Those chips look great. Time to pick your favorite this old Tony project. Or make a steel MP3DP. Because, magnets.

I need to double check the Gcode but I don’t think there is any angle to a plunge at a holding tab. Single flute cut much worse, but plunged about the same. I will have to look at some speeds and feeds calcs, and look at some high end endmills to see if there is something different. These are plunge cutting bit though, 0.4mm plunge, maybe even less?

If that all seems good than yeah some sort of helical pre-drill would allow for much faster cutting. I never wanted to go much deeper as those plunges were nerve wracking. I had no idea the router air would drown out the all important milling sounds, but the plunge was nnnnasty.

On a side note I have hit up some other endmill company’s, none of them so far want to offer any sort of bulk discounts. Turns out 50 at a time of each type must not be bulk, machines shops must tear through carbide!?! Kyocera directly ordering hundreds at a time offered to sell them to me for more than I sell them for in the shop. I am going to have to do some import testing head to head on the metals. Imports can be bought in any quantity, without begging on the phone. /end rant/

I need to double check the Gcode but I don’t think there is any angle to a plunge at a holding tab.

I’m pretty sure there is. I use a pretty small plunge angle most of the time.

Yup, your right. It is such a small plunge it just does a little 45 wiggle to one side and back.Very noticeable in the visualizer. Cool! I need to check straight plunge and a lower plunge for sure. I honestly didn’t notice so I never even changed it. A spiral down would be nice though, they work really well. 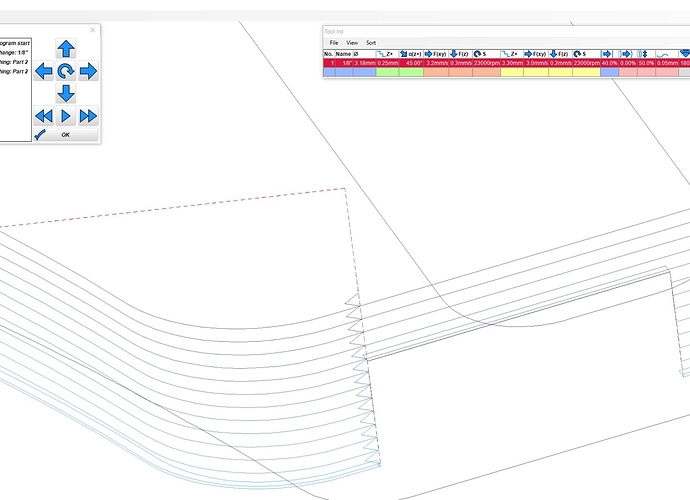 Now for 3D relief cutting, maybe one of those Hans Solo in steel designs?

It will be that plunge that kills your bit, but that was awesome

plunges, but I dont know if that cam software will do that.

Thanks it was super exciting.

That plunge was actually ramped, turns out maybe too much. I can’t wait to try a few things but I will be spending most my day cutting LR2 parts. I will try again soon.

I really want to try that, milling steel reliably on such a machine would be a total game changer for me. Maybe I’ll have to build a new one, or maybe I’ll try that with my 4060 CNC router. I guess if it works on the MPCNC it should work as well with any other machine. We were all wrong this entire time, rigidity is for suckers.

Nice! Is that a “stock” MPCNC? What router?

rigidity is for suckers.

Hey…I’m improving it slowly. I got my hands on some bigger brand machines that cost a lot more money and they were wet noodles in comparison. Seriously, gave me a ton of confidence in the current iteration and inspired me to get back to progressing.

I was doing some rough testing today on the machine from the steel video (stock, red and black build) for my next idea. I was getting about 0.05" (1.27mm) deflection at the endmill with the Z extended 2" with ~300oz (18lbs) of force. Just a super rough test. I need a proper mount and fixture but I need to know if I am improving things or not with real data. I will make a decent dial mount and scale jig, then decide on a reasonable amount of force, 18 is excessive. I am much more concerned with the initial smaller deflections.

Nice! Is that a “stock” MPCNC? What router?

That’s it…everyone go back and make sure you didn’t hit dislike. Who would dislike that?! Haters. One was from the US and one was from Germany, both on mobile phones and both subscribers.

Just messing with you, can’t get me down, I just cut steel!!!

Haha, I didn’t mean that as a critic, actually that was quite the opposite.

Most people (including myself), thought that rigidity was the key when it comes to hard materials. I even made a lot of mods on my machine just to get it more rigid. Well your machine proved everybody wrong, what matters is feeds and speeds, almost entirely. I bet we could build a CNC out of Legos and be able to mill aluminum, and steel. I wouldn’t have thought of that in a million years before.

The machine is surprizingly rigid given the materials its been build of. But let’s not kid ourselves, it is closer to noodles than it is from a HAAS milling machine. Good thing we learned form that experience is that it doesn’t really matter, unless maybe if you were to mass produce stuff, in which case rigidity would improve speeds and help lower your costs. But this machine is not for mass production purposes, it is for DIYers and rapid prototyping, and it is perfect for that.

In my opinion this news needs to be shared as widely as possible, it will definitely catch the interest of many, many DIYers around the globe if they know they could mill any material including steel with such a simple and cost effective setup.

well, I would say rigidity is still key

those small cuts + deflection will wear out the mill faster than a more rigid machine.

BUT thats its possible is amazing for the simplicity and amount of money this setup costs.

Not offensive at all. Promise. I love the discussions here.

Feeds and speeds are key, but rigidity makes it easier/faster (larger feed and speed range). Still think I have a small but effective design change coming. It just takes a little free time to test it.

Stop keeping us (me)in suspense what is it ??? inquiring minds

Shoot I still haven’t had a chance to CAD it up. This month has blown all previous sales records, trying to keep up and not run out of stuff! I have some help here today so maybe I can get a little further ahead.

Glad to here your busy and making money

Just kidding take your time and when its ready its ready thanks for all you do this has been amazing !!!