A friend told me he would like a CNC to make surfboards , and when I saw some videos of the lowrider, I had no other choice… order a kit, get some plywood and stainless tubes cut, run my printer non stop for a few days… and voila!

I was surprised how smooth a built it was, with everything assembling and working as it should at the first try… almost

In the video, you can see some sheets of paper in front of the lead screws to avoid the polystyrene to get in… I’ll design and print something to replace that. Other improvement will be to use the airflow from the spindle to blow the dust away.
I also need to fine tune how fast I can push it… 3000mm/min seems to be ok was long as the cut is not more than 3-4 cm deep with 3 mm stopover.

Only issues I had was not being able to connect with my Mac via repetier as it was not seeing the board, but worked great with a windows laptop.

Last remaining issue is the random freeze in the middle of a cut. And the only way to get it restarted (as I saw on the forum) is to plug in the laptop, connect with repetier and it restart fine until the end.
Did anyone found a fix for that?

I’ll be sad to see her go though when I’ll deliver her (yes it’s a her: such an artist!) …

I tried linking a video of the machine dancing… but “Sorry, you can’t include links in your posts.” … so I’ll post it in a few days !
preview: 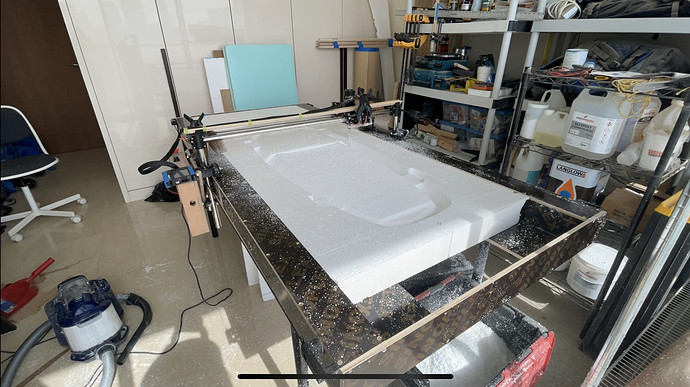 I think the XY is limited to 50mm/s, so you will have to change that to get higher speeds. A 24V PSU may be worth trying if you have issues. I usually don’t recommend it, but you can lose torque at high speeds like that with a 12V. 30-40mm per pass? Foam just doesn’t care, huh? So nice.

If you post a fake link, I can change it to the real video.

thanks for the confirmation, seems like I set it at the maximum by mistake

instead of going faster, I’ll try to find a wider cutter to the bigger roughing passes …the problem will be to vacuum all that after

below is the link with a couple spaces. Thanks !

And yes… 40mm deep / 3mm stepover with 6mm bit is perfectly fine… it handled up to 70mm deep without problem, just a bit more noise and the surface finish is almost good enough to fiberglass the board straight away

Well you are my favorite person right now. Completely made my day!!!

When I was talking about this CNC I was designing on my kitchen table I was telling all my co-workers about how it was open-ended and could be built any way you wanted it. That was to become the MPCNC and I know you are using the Lowrider but…one of the very first thing we talked about was shaping a couple longboards to use on our lunch break. We worked in Carlsbad two minutes from the water and I commuted there from San Diego, several times I surfed to let the traffic die down after work. (I miss surfing dearly).

The CNC thing turned into my job and I never got the time to actually try it. You Mat are the first person I know of to do it. I am super envious and so excited. I can’t wait to see more!

vacuum all that after

You can fit a vacuum to the lowrider so you don’t have to do it later. Check out some of the other build threads to see how folks route the hose.

With the first test successful, next step is to find a way to move it to my friend’s place … and at first it will mainly produce wing foil, surf foil, and kitesurf board, but I kept the ends of the table unglued to easily make one open end and be able to cut long boards too, in 4 different cuts, it’s 6ft long, so 9 footers shouldn’t be an issue… but we’ll need better bits to cutdown time before we get there

It’s on the plan for when it’ll be in its final place… the issue is to have a vacuum strong enough with that crazy long bit, it’s 100mm cutting and 150mm total, and it’s not possible to get close to the end as the full 100mm height is used at times. Even those “hairy skirts” might not be up to the task

The volume is also a bit of a concern, I used my regular vacuum today and had to empty it around 20 times

but there’s a cyclone thing and a huge bucket waiting in its permanent place.

Backup plan will be to blow the dust toward an end of the table and manually vacuum it there.

Even those “hairy skirts” might not be up to the task

I don’t know if you would need to worry about it. Each time it dips down it should clear the work area and if you do not have the router blowing down the mess should stay fairly local??? I am pretty surprised how clean mine stays. A lot of people add skirts, but I have not seen the need. Just make sure you have a minimal stick out and when it comes close it will get it all. Heck Barry had to increase the distance as his vacuum started to pick up the workpiece.

I didn’t drill the plate for vacuum port, so the router draft stays on top (and is quite weak on those spindles), but the upcut bit creates an upward draft that catches the smaller pieces and send them flying, as it’s full of static, it then sticks everywhere.
It looks like the bearings don’t mind to much, but it kind of compresses the beads around the tubes and I’m afraid too many layers would jam it.
The lead screws sounded like they didn’t like at all, that’s why I added the “paper shields”.

Overall, it’s ok to make a mess in a shaping room, but I want to keep the moving parts relatively clean , that why blowing it away is a viable solution.

on my mpcnc i had a problem with styrofoam. It sticked to the tubes and to the belts. That caused the whole contraption to stutter and miss steps. I added a vacuum thing with cyclone and problems went away. I just used a 5 cm long bit though

I think for this, one of the cheapo harbor freight dust collectors would work really well. I think the foam would be too light for a cyclone to separate. It wouldn’t hurt the impeller at all though, so just letting it suck through the vac into a big cloth bag would work. Now getting it from the cloth bag to a real trash bag could be fun.

I’m picturing a bean bag chair that got chopped up with a lawn mower?!

@Mat This is awesome! I’d love to see your whole process from square block to finished board.

How could I do anything before she arrived in my life???

This is awesome. If it sometimes is freezing in the middle but still running the program check that your TFT screen firmware is most current/has all the commands that your script is using. For example if I leave a M117 (message) command on screen without hitting confirm or have gcode it doesn’t know (M9) the TFT will freeze but the program keeps running.

Thanks for the tip, but when it freezes, the whole machine freezes in place
When I run the same Gcode twice, it freezes at different place, so I wouldn’t suspect unknown command… I suspect more the SKR board was just connecting to with repetier restarts everything.