I am going to blame @caffgeek for sending me down yet another slippery path after his thread posted here: Table idea

QUESTION: What are the disadvantages with building a CNC table ridiculously low (say 450m - 18") - I think that building the articulating bench in the above link is an unnecessarily complication so why not just build the whole enclosure lower and use the lid as a layout/assembly table at normal bench height?

I admit that I have been overthinking the whole process for quite some time, and if I’d had the use for a CNC machine, a 3d printer and a bunch of other skills I currently don’t possess, I’d have probably had a working machine for a few years now and would be merrily on an upgrade path.

But I didn’t and haven’t, so here I am about to start building the table for what I thought would be a Lowrider, when the above thread threw me into a spin.

I have two significant criteria, if you ignore the elephant in the room about what I am going to do with the machine if ever it gets finished (started)

No matter how I do the sums, the MPCNC will give me a larger footprint within the enclosed space that I have.

What are the pros and cons for such an arrangement? I think I might just mock up the “box” and see how challenging it might be to work at that level.

How old are you?

Even 10 years ago, I probably wouldn’t have minded getting down on my knees to put stock in the CNC. As of today, it would probably mean that I’d give a lot of consideration into other ways I could get the results that I want without using the CNC, and would only change stock the absolute minimum number of times. In another 10 years, it might mean that I consider that to make it an unusable tool.

This I do know. At any age, poor ergonomics for a power tool makes it an unsafe power tool. Having that bed 18" off the floor makes for poor ergonomics, and under an assembly bench even more so. In fact with the flip up design, where the CNC comes up to bench height, I would strongly advise to NEVER allow the CNC to operate in the lower position.

Think of it. If you drop the workbench down you WILL do something at that bench, while there’s a moving tool running around at knee height. Get a loose fold in your pants caught in a belt, or a wire snag, or some flaw in your material sending something sharp at your legs, and you’ll never even see it coming. Fumble a part or a tool, and it bounces off of your leg and into the path of a cutting bit and you’ve got a screwdriver, or part of one sticking into your thigh.

I’m a reasonably safe guy, but I know that I was at the tablesaw, and was 3 rips into making stringers for my torsion box tonight before I remembered to grab my safety glasses off of the peg behind me. No way I’m never going to try to work at a bench (Just a little, it’ll be FINE.) sitting there while I’m watching my CNC making sure that it’s not going to burn my house down.

Thanks @SupraGuy Hmm… yep, I’m old enough to know better, AND ergonomics are going to be a problem, particularly given a 900mm reach to the opposite side of the work area.

However, (and this is more musing over your point rather than arguing!) I hadn’t considered the CNC to be a power tool in the sense that spinning things and wires will be entirely within their enclosures and not able to be operated if they are not.

I also haven’t really considered what happens to a fire in a fully ventilated space. Now that could get interesting! Slightly off-topic, but have been considering installing one of these in the dust extractor cupboard, could do the same in the CNC enclosure. https://www.passivefirewarehouse.com.au/p.i.e.-super-foam-1L

Your comment re:working at the bench are correct, but in my situation an unlikely eveentuality. (I have a few benches!)
On the other hand, the thought of having a bit or screwdriver sticking into my leg is quite appealing when I consider where it might end up if the table is a little higher!

I suspect just this one reply has shown me the folly of my way, but I look forward to other insights!

My table sits on the floor on wheels. The idea was that it could tuck under another table when not in use. The ergonomics are pretty bad. The only way to do anything is to sit on the floor and even then I’m hunching over.

I had thought I could lift it onto a bench for working on it or using it, but it’s heavy enough that I don’t want to take the risk of dropping it.

The wheels are nice though. 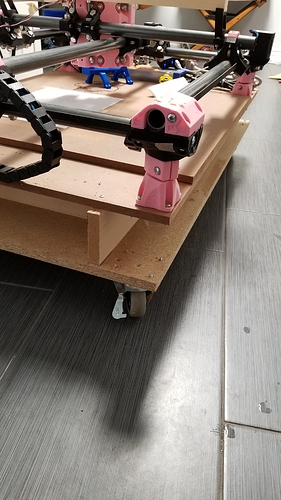 You need a scissor cart!

I would definitely look into the harbor freight roller stool. At least you can zoom around the shop to pick up the screwdriver and stuff.

I have a Harbor Freight furniture dolly and I added some plywood for the inside, but it’s currently in use. 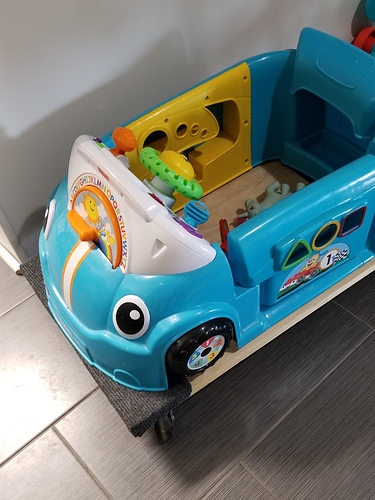 This is something I’ve been bouncing around in my brain lately too, as I plan out my own MPCNC. I’m aiming for something about the same size as @bitingmidge, and while I have the room to not worry about the floor space now, that may change in the future and I want to make sure that I can change things up in the future, if needed. Right now, I’m considering three possibilities; a fixed height on casters, something like Peter H started the thread with but on casters, or a fixed location that can be winched up to the ceiling to create floor space.

Going in reverse order, I’ll start with probably the least likely option, the ceiling mount. While this sounds like an interesting option, and probably would be cool to watch, I don’t really have the headroom for this too work and I have enough floor space to not really make this needed. I’m about 5’ 11" (180 cm) and have about a 7’ 1" (216 cm) ceiling, giving me about 14 inches (36 cm) in which to fit ceiling anchors, pulleys, the enclosure and table, and the machine itself. This is doable, if tight, but it also means I’d still have to build some sort of stand for it to rest on so it doesn’t swing around uncontrollably while running, and if the cables are permanently attached it could make access tricky in some situations. Depending on how strong your roof is, Peter, and how much headroom you have to work with, I could see this being a workable solution for saving valuable floor space since it sounds like you don’t have much to work with. One possible solution could be to build a workbench that matches the dimensions of the router, so that the router could be lowered and secured to the workbench when needed.

Next up is something like in the video, where the mill gets lowered down when not in use. This could potentially be an easier solution, since you don’t have to worry about winches or anything like that, but I’d be worried about the rigidity of a solution like in the video. It seems that since it seems to rotate about and be supported by one axis, with the machine and the stock cantilevered out, plus with the work bench cantilevered out over the machine when it’s folded down. If you used some beefy bearings and maybe some adjustable supports to keep the cantilevered ends from collapsing during use. My preferred solution for something like this would be to keep it simple, and make a table to mount the MPCNC with a removable work surface above it. This way you still have a fully supported work surface without a complicated mechanism, and you could potentially put the work surface on while the router runs underneath. If I decide that I want to be able to have a workspace where the router is I’d go this route personally; no complicated mechanics, easy to build and still nice and sturdy.

But I think I’m gonna stick with a fixed height since my goal is to get the MPCNC to basically be a production machine and I want it to be nice and accessible, and I already have 64 square feet of work bench space across four work benches and a hundred or so square feet of unused floor space, so I don’t really need to worry about that. I am, however, going to get some heavy duty locking casters, so that if I decide later on to move the machine around, or if I move it to make room for a car during the winter (the workshop is in a still usable garage) it can be done easily.

But I think I’m gonna stick with a fixed height since my goal is to get the MPCNC to basically be a production machine and I want it to be nice and accessible, and I already have 64 square feet of work bench space across four work benches and a hundred or so square feet of unused floor space, so I don’t really need to worry about that. I am, however, going to get some heavy duty locking casters, so that if I decide later on to move the machine around, or if I move it to make room for a car during the winter (the workshop is in a still usable garage) it can be done easily.

Thank you all for your thoughts!

This pretty much sums up my position except that I’ve got about 12sq ft of unused floor space that is exactly “CNC sized”!

One of the reasons for the “top at bench height” is that all horizontal surfaces in my workspace are at the same height. This enables me to feed into any machine using any adjacent surface (or something that I’ve just wheeled over) as an extension table. HOWEVER, on balance, if I am going to have a proper dust control enclosure, the compromise will be too great - so I’ll just wheel it out of the way as necessary.

My build will take a LONG time, because I’m a bit relaxed about how long projects should take - it’s the journey that’s the fun bit isn’t it? There will be many questions like the above along the way, particularly when it comes to the parts involving stuff I know nothing about, so thank you all for just being you!