Table with Side Panels idea to cut down on dust

I have been looking at keeping the sawdust down from my cutting. I hooked up a vacuum to the tool mount & probably need to revisit making that better, but thought covering the sides would at least cut down most of the dust going outside my table. I saw a photo of someone else’s table that had like a box frame around their MPCNC & that was the start of this idea. I did not have enough room on the top around the CNC to rest a box frame, so I started looking at mounting it to the legs & top ledges.

I plan to use 2 - 2x4x24" studs on each corner with a groove cut down the center for the thickness of the panels. My table saw should be able to cut the groove well. Probably going to use a sheet of 1/4" plywood or paneling cut to 24" widths. I might use a 2x4 fluorescent light cover for one side so I can see it working. The light cover seems to be less expensive than plexiglass. I found a couple of light covers that were $8 to $11 each. They probably will not hold up as well as plexiglass though. I am also going to use 4 -1x2’s at the bottom of the 2x4 corner supports to act as a bottom for the panels to rest against. I will probably ponder this idea a day or so before putting it together to see I decide to change something else. Rigid insulation or Styrofoam panels might work for the sides also & cut down on more of the noise in the process.

Let me know if anyone has some better suggestions for this idea. 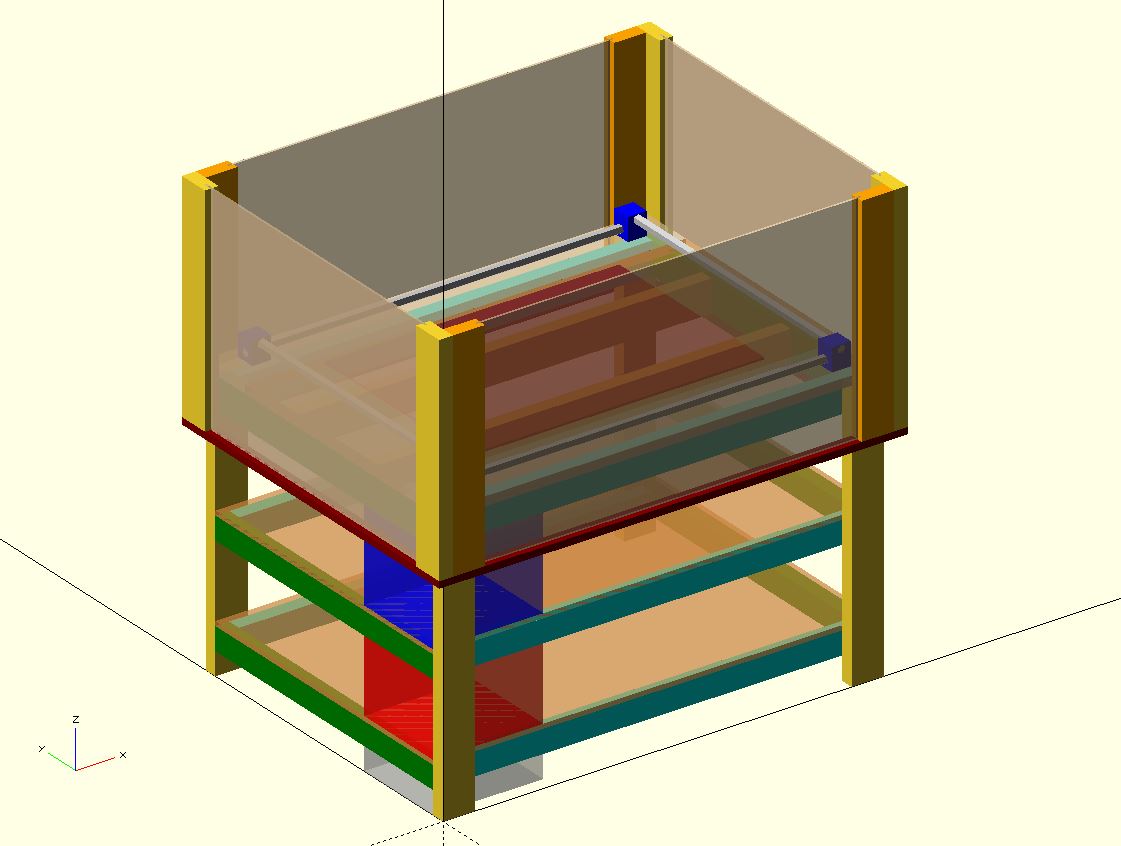 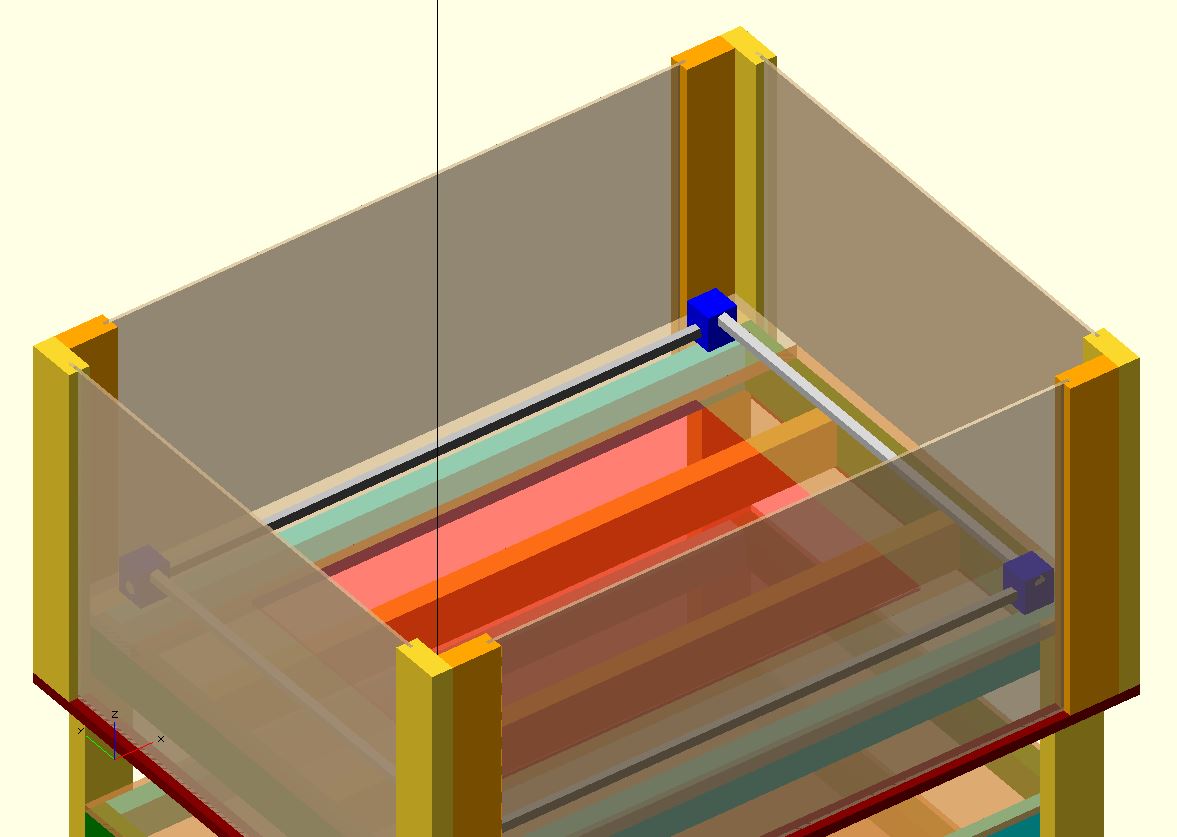 I went to Lowes today & bought 3 - 2x4’s & 1 sheet of 4x8’ Smooth Brown Hardboard Wall Panel. The panel board was less than $8. I had lowes cut the panel board into 2’ widths. They are probably not all quite 2’ wide. I cut the 2x4’s into 8 - 2’ lenghths & also cut 4 1x2’s the bottom panel stops. I then cut a 3/4" deep slot for the hardboard to slide in. I also cut an 1/8" deep slot in the 1x2’s. I clamped all the 2x4’s onto the table using a 2’ long spacer for each of them so they are all the same height. I then checked the dimensions before finally cutting the hardboard to the proper widths. I just have screw all the 2x4’s in place now. Here is photo of the test fit with 2x4’s clamped in place. 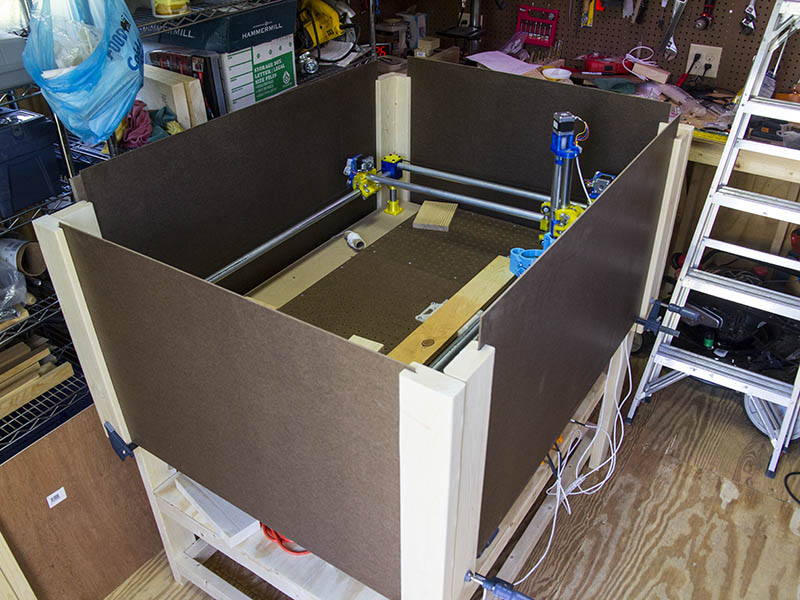 I love it. I think I might do this to the sides and back all the way down. Keep the dirt off my shelf’s (my printer is on the bottom shelf, oops). I like that they slide out easily. I clamp on the sides a lot I would love to be able to take them off when I want. Thanks for the inspiration.

@geodave That would look great with acrylic sheet but sure would make it expensive. I wouldn’t mind it with just one acrylic panel wall and the remainder in panel board so I can keep an eye on things from a distance. Have you guys seen any table designs that include some type of easy leg height adjustment. I’ve read before that some folks are drilling holes in their table to allow longer legs that can go through the table and easily be adjusted but I’m wondering how rigid that would be? The conduit lengths on my legs is under 6 inches but I find that even at that length I can rock the frame fairly easily by hand. Sometimes I do laser engraving of vector art and see this resonation when the tool moves from a straight path to a diagonal. The etched line will have a sine wave pattern at the point of direction change that quickly returns to a straight path as the vibration in the frame stops. I’ve tried to change speed and acceleration settings to correct it but I think I’ll need to find a way to attach the legs to the table more securely. This issue doesn’t show up on router cuts or raster engraving with the laser, only on vector laser engraving, most likely because I have the laser and router both attached and neither are making contact with the work so maybe more inertia? Let me know if you have any suggestions.

Instead of using the expensive acrylic sheets take a look at the 2x4’ fluorescent covers. I saw one for less than $11 that looked good. There was one for around $8 also, but seemed like it would break easier. Might could also put some rigid insulation or Styrofoam on the inside of the frame to cut down more of the noise.

My legs are 5" & have the bottom of the flex feet bolted down to a 1x6x6" wood block & have that clamped & it is pretty solid. I might have to rethink how I am doing that with these panels in place though. Not sure I have enough room for the clamps with the panels there.

I just checked the table & I do have enough room to use the clamps on the corner blocks & the middle pegboard. I am liking this design.

I’ve never had an issue with mine until I started laser-engraving vector art. Not sure if I should try to fix it or just avoid the vector art at this point. I’m very happy with the rigidity and precision on router operations though. Looks like I’ll be making a home depot trip in the near future:)

I prefer Home Depot to Lowes, but Lowes is 5 minutes away & Home Depot is 35. I did buy all my EMT & torx wood screws from Home Depot.

I made holes for the leg conduit to go through the bottom. I used a 7/8" forstner bit, which is a little large, so I made the holes just a hair off center (I specifically tried to make it off towards the two screws in the foot so the back was more supported). Afterward, they were much more rigid.

How about putting a vacuum hose attachment in one of the side panels to connect a vacuum?

I am currently using a vacuum attachment connected to my bosch tool mount & the hose comes in from above. That might work for someone else’s setup & as I work with this design that might be something to consider later. I would really like to make a vacuum table, but would probably come from underneath with a hose attachment for that.

I put all the parts together yesterday & fits pretty good. One of the panels is a bit tight in the slot, so I should have made those cuts just a hair wider, but they all slide in. Here is a photo of it all put together. I used #8x2.5" wood screws for the corners & #8x1.5" wood screws to mount the bottom 1x2" boards on. The 1st test I will do without my vacuum attachment to see how much dust the panels keep out of the rest of the shed. 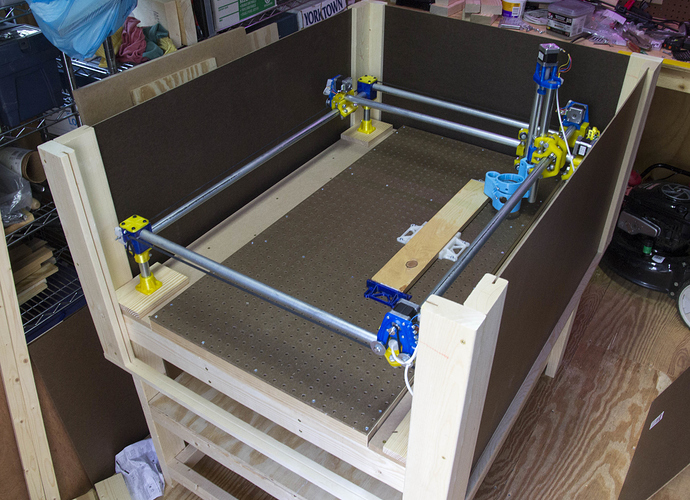 geodave. can you toss out a link to those stops you are using on the pegboard? please thats a good idea, using inexpensive pegboard as your spoil and those printed parts are great.

These are the 2 clamps I used.

3in base Tensionable Soft Jaw Vice for Desktop CNC by Cutlass

Tensionable Table vice for 1x1 inch grid #6 hole mountingboard. Designed to compliment the Modular Table Vice designed by SchmidtN, can be used alongside his device as they provide the same part offset and spacing options. This vice adds the...

Table vice for a Shapeoko 2 that has a 1" grid drilled into it's bed. The mounting points for this clamp is 3" center to center and made for #6-32 screws. They are meant to be used in pairs with an adjustable length of 3/4" on each jaw, which gives...

The pegboard frame I made from a 2’x4’ sheet of pegboard with 2x2’s framing on the back. I used the better grade of lumber from HomeDepot for the 2x2’s so it is quite flat. Here are a couple more photos of the pegboard frame. One showing how the back of it looks. It was a little bit of a pain bolting the clamps underneath, but using wingnuts helps a lot. I also use a clamp across the top of the part to tighten it between the clamps. The 1st clamp has a feature that is supposed to allow you to tighten it further on top, but it did not work well for me. 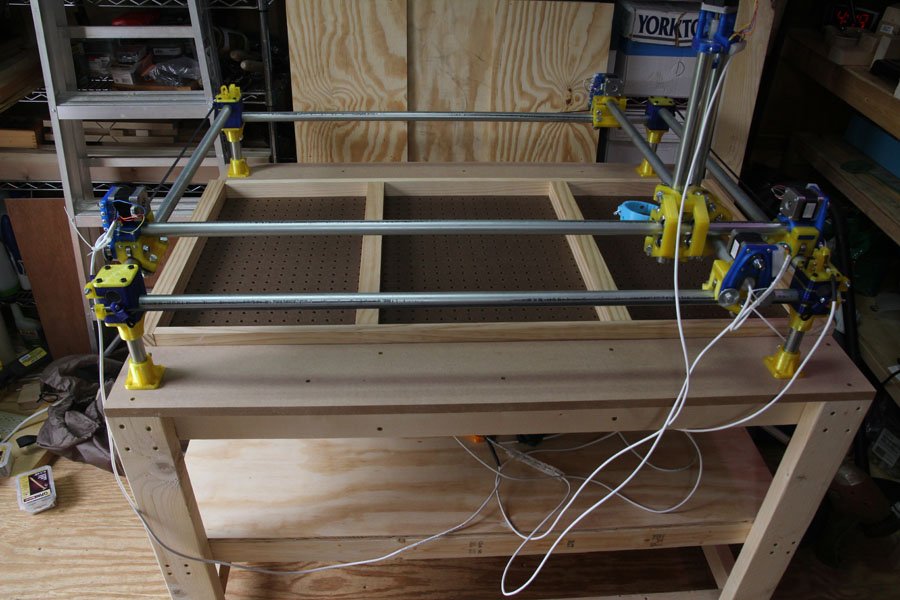 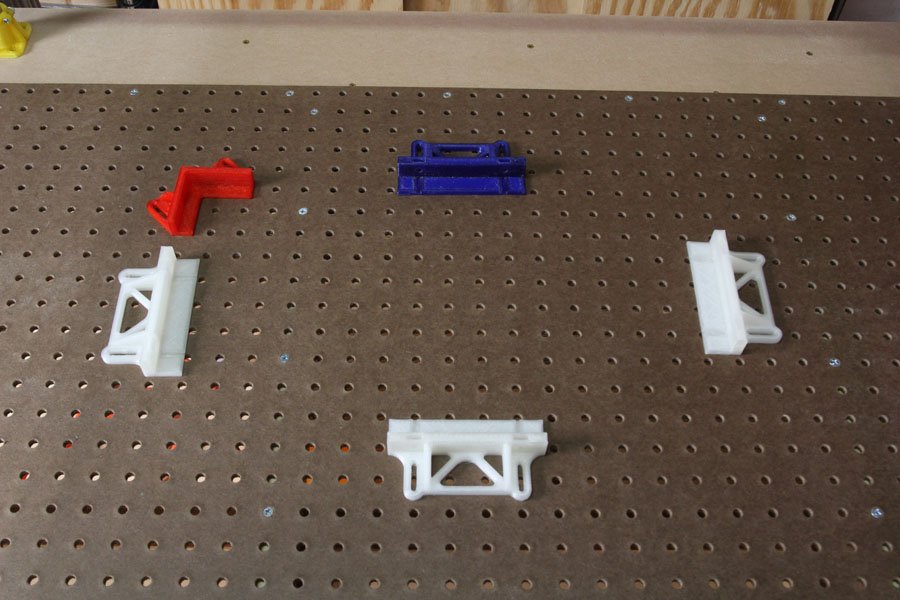 thank you… that looks great

I got tired of having my laptop on the floor or some make shift support, so I am adding this simple shelf bracket on the end that I can easily take off. I am using 1x2" lumber with 2 - 1/4"x2" bolts at the top End, 2 - 1/4"x3" bolts at the top Leg & 2 - 1/4"x3.5" bolts at the bottom leg. I added 2 washers on each bolt except for 3 washers at the bottom connection. 1/4" locknuts are used for the top 2 connections & a 1/4" wingnut at the bottom so I can remove it easily. I plan to use some scrap plywood just laid on the top of the 2 end brackets. Here are some photos of my progress. The board in the back of the 1st photo with the tape measure on it I used as a template to drill the holes at the correct spot in the legs. I used a drill press for all the holes except the ones in the legs to get a nice perpendicular hole. I will attach a PDF or jpg file of the drawing for this in the next message. 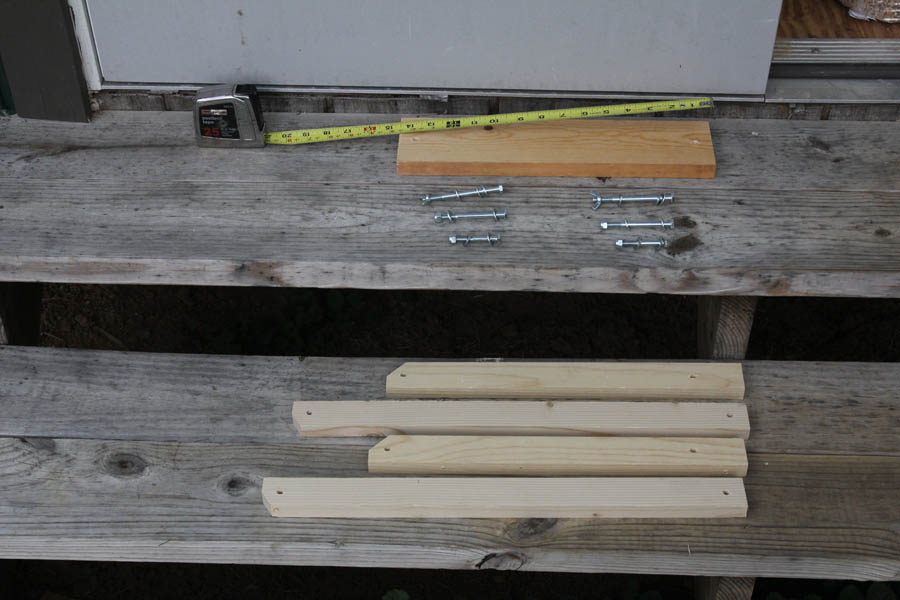 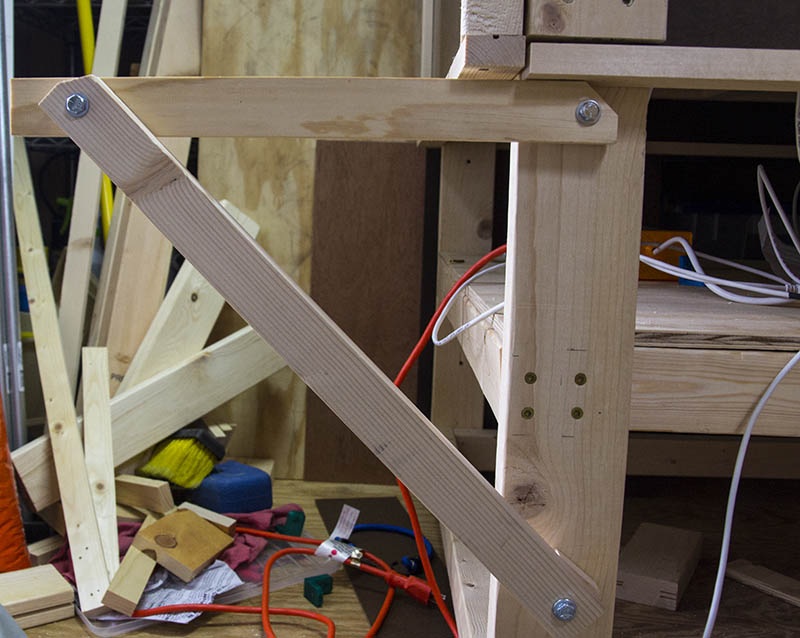 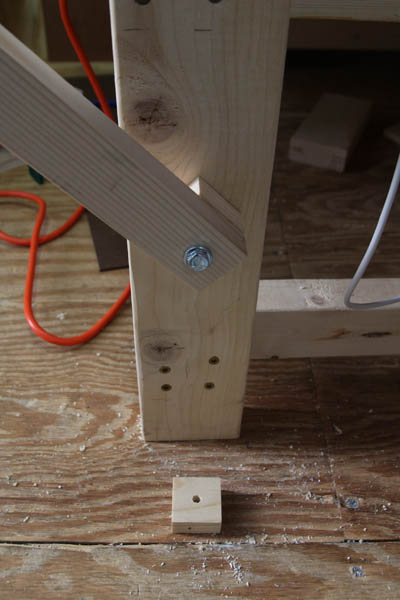 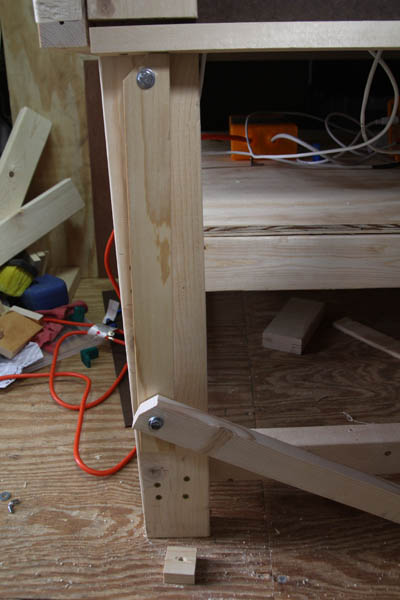 Here is a PDF of the drawing for this. I also left about an 1/8" gap at the top of the bracket to allow for clearance when I swing the bracket out of the way. I used a piece of the 1/8" hardboard to get that spacing consistent on both sides. The template board is that 369mm length shown in the drawing. I find mm more accurate to use when the numbers do not come out to a 1/16" increment.

Posting so I get notifications for this thread. Nice stuff you guys are doing with the table and clamping here.

What kind of weird ass spam is this? https://www.v1engineering.com/forum/topic/table-with-side-panels-idea-to-cut-down-on-dust/#post-14913

I’ve got a ‘poor mans’ setup that is used for dust and sound - My MP-CNC is in a shed with minimal insulation, but with the top panels laying flat (spare sheets), and the door closed, it’s quieter than a vacuum cleaner. The black side panels were cheap because they are used to form cement work. I should also mention, I cut a lot of MDF and that stuff is dusty. Once finished, it’s a quick vaccum, clean the polls and brush the bearings. 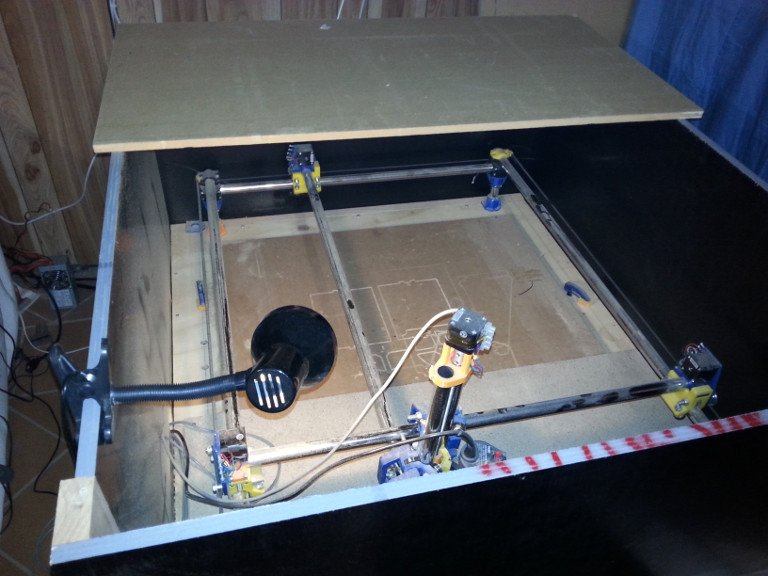